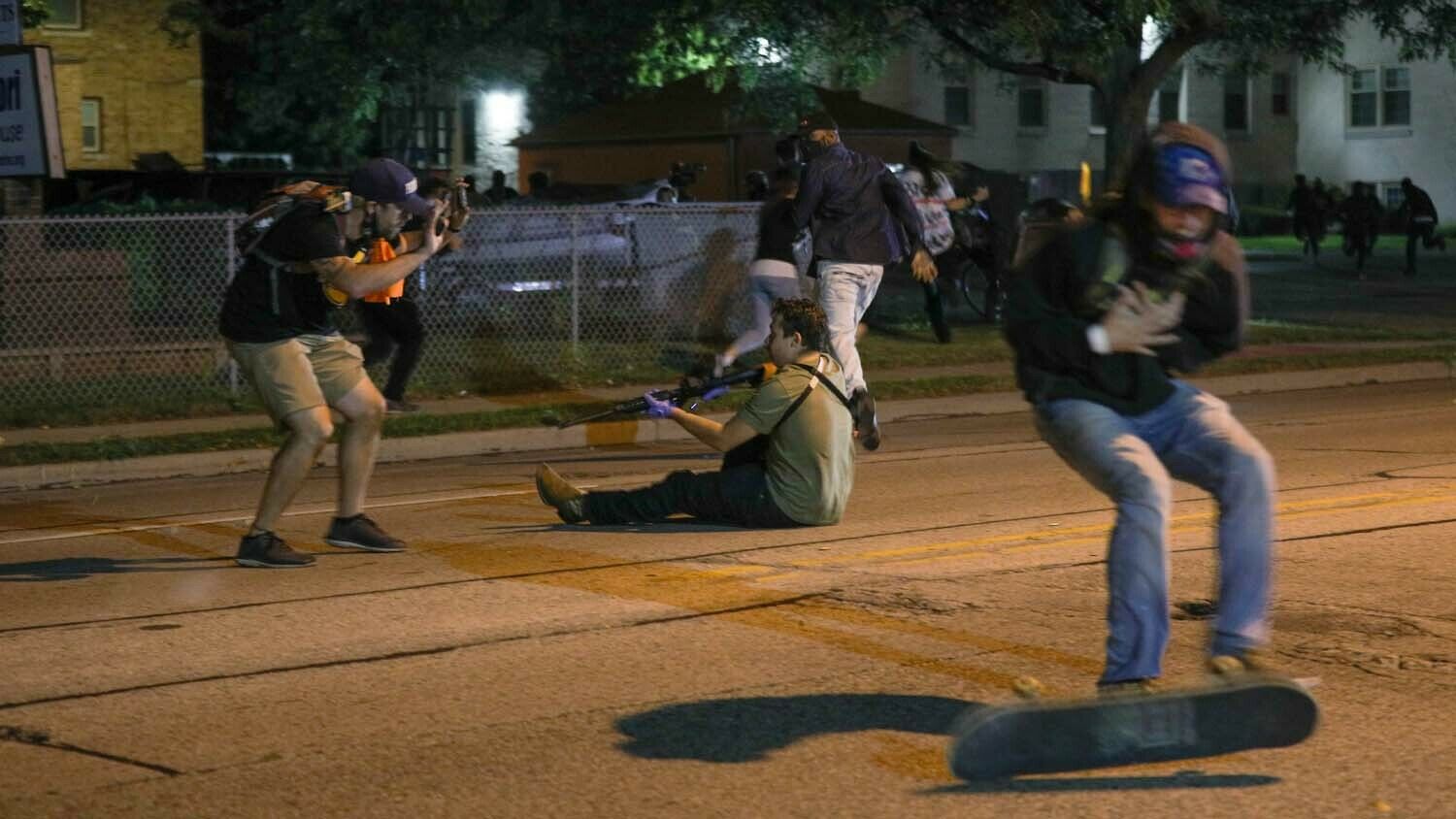 Clashes on Aug. 25, 2020, between protesters and armed civilians protecting the streets of Kenosha against arson during the third day of protests in Kenosha, Wisconsin
Tayfun Coskun/Anadolu Agency via Getty Images

Riots burned in cities across America in the summer of 2020. In August, rioters began burning down Kenosha, Wisconsin. Police declined to stop them. On day three, August 25, Kyle Rittenhouse drove from a couple of towns over. The 17-year-old was involved in his community and had worked in Kenosha as a lifeguard, and his father lived there. Like some of the others out that night, he carried a firearm. He cleaned graffiti, carried medical supplies, and tried to deter rioters from destroying. Close to midnight a man began chasing him. When the man closed to within a few feet, a gunshot went off in the same parking lot. Rittenhouse began to turn, the man lunged, and Rittenhouse shot four times in less than a second, killing him. Rittenhouse headed through the crowds toward the police line. People shouted that he had shot someone. Some yelled for him to be attacked. At least one person struck him. He fell to the street. In the next 10 seconds, a man tried to jump on him; another man struck him in the head with a skateboard and reached for his rifle; a third man within about four feet raised his hands then dropped them, pointing a loaded pistol at point-blank range; and a fourth man raised his hands. Rittenhouse shot only the man grabbing the rifle (fatally) and the man pointing the pistol (non-fatally). Rittenhouse then went to police to put himself into custody.

These are the facts of the Kyle Rittenhouse case.

At this moment, the jury is deliberating the charges and the evidence to determine if Rittenhouse shot in self-defense. But the liberal media is rushing to a very different kind of judgment.

Immediately after Kyle Rittenhouse shot three people during riots in Kenosha Wisconsin, the corporate media rushed to judgment. Certainly the narrative they had been pushing all summer in support of the race riots and stirred up again after Kenosha helped influence the district attorney to indict Rittenhouse in less than 48 hours, when there was hardly even an investigation. Fourteen months later, a jury and the world outside has heard two weeks of court testimony. And the media is focusing on Rittenhouse once again. But how much is it focusing on the facts?

The media’s coverage of the Rittenhouse trial tells you much more about the media agenda than it does about Rittenhouse.

With so little to go on, it’s surprising that news executives and commentators are trying to use this trial to convince you that America is in danger of white supremacist vigilantes striking “mostly peaceful” radical-leftist riots.

The first man shot, Joseph Rosenbaum, was a pedophile, a convicted child rapist, bipolar, homeless, recently suicidal and had emerged from a mental hospital, apparently that very day, and gone almost directly to the riots. Rittenhouse did not know this, but he did know that this volatile man had confronted him earlier in the night and, according to testimony, had directly threatened to kill him and, according to video, was grabbing for or had grabbed the rifle. Also, since leftists always make a point of it, he was white. So was the second man shot. So was the third man. All three have criminal records of some kind, we have come to find out, although we don’t know for certain why they attacked Rittenhouse.

The Kenosha County District Attorney’s Office rushed to indict, and if you’ve watched much of the case, you’ve seen its prosecution of that indictment, predictably, collapse.

The most certain thing in all of this is that the media will launder whatever happens to slander Rittenhouse, people who support police, conservatives and even whites in general. Look for them to do this even in the district attorney’s investigation and prosecution of this case.

“If you want to know why critical race theory [crt] exists, the actual law school theory that emphasizes that supposedly colorblind laws in America often still have racially discriminatory outcomes, then look no further than the trial of Kyle Rittenhouse,” she said. “Earlier today, the teenager accused of murdering two men and wounding a third in Kenosha, Wisconsin, last year took to the stand in his own defense. And the circumstances are almost built for an actual crt course. The white now 18-year-old faces an almost entirely white jury of his peers, with the exception of one black man.”

She knows Rosenbaum was a pedophile, crazy, hostile and in the act of chasing and assaulting Rittenhouse when he was shot. She knows that all the victims were white. She probably knows that a jury of your peers in Kenosha County, Wisconsin, will be mostly white.

The media is a huge reason why we had rioters and arsonists bringing “justice” to George Floyd with hundreds of violent protests.

Chicago police are gearing up for riots in the event Rittenhouse is acquitted of homicide charges, but you have to think that riots were what the radical left wanted when the district attorney and the corporate media decided to charge a teenager with murder without actually investigating the case first. By blasting false information about the Rittenhouse case over the airwaves for more than a year, the radical left has created the perfect conditions for another Kenosha riot if jurors believe the evidence that Rittenhouse acted in self-defense.

The only logical conclusion is that the radical left and the corporate media want mobs to tear down cities. In his article “The Real Agenda Behind Black Lives Matter,” my father, Trumpet editor in chief Gerald Flurry, explained that the radical left is trying to foment racial divisions in America. “These leaders are still using phrases like ‘police brutality’ and ‘black power’ to further their agenda,” he wrote. “In a 1950s tract titled ‘And Not a Shot Is Fired,’ Czech Communist Party theoretician Jan Kozák wrote about how Communists took over Czechoslovakia through parliamentary maneuvers. The strategy he described required pressure for radical change from two directions simultaneously: from the upper levels of government and from provocateurs in the streets.”

The Biden-Harris administration is using a similar strategy to fundamentally transform America. Radicals like Thomas Binger and Joy Reid meet with street provocateurs who advocate rioting as a form of protest, while “deep state” bureaucrats are pushing seizure of police authority as a way to solve those riots. This strategy may sound both despicable and shocking, but the late Herbert W. Armstrong predicted it many decades ago.

In his March 1969 Plain Truth Personal, he asked, “Why are our people unable to recognize the Communist line—the Communist plan and conspiracy—in college and university riots, in propaganda accusing ‘police brutality,’ in ‘black power,’ ‘black panther’ and other slogans, even in ‘civil disobedience’ and ‘nonviolent’ movements of protest which lead to violence?” He answered with this shocking truth: “The guiding hand in student revolt is the Communist Party. Many students, their emotions stirred and enraged to violence, do not themselves realize this. Yet actually, these young leaders of the ‘New Left’ movement are going beyond the Communist Party. Their plan is to stir up college-age students to revolt first, and the teenage high school adolescents. If they can corrupt and/or win over tomorrow’s students, they will gain control.”

Some of those college-age students and high school adolescents that Mr. Armstrong wrote about now control the Democratic Party, and they are still using the same racially charged propaganda. Without racial hatreds, real and perceived, they would have no influence or power over the American people. Therefore, the racially charged rhetoric being hurled by politicians is intended to stir up negative emotions and anger that radical leftists can exploit in their quest to fundamentally transform the nation. But by tearing down the police, radical leftists are actually in the process of tearing down the nation’s last line of defense. The flames of hate these agitators are fanning will spread to the point where they can burn down the whole nation!