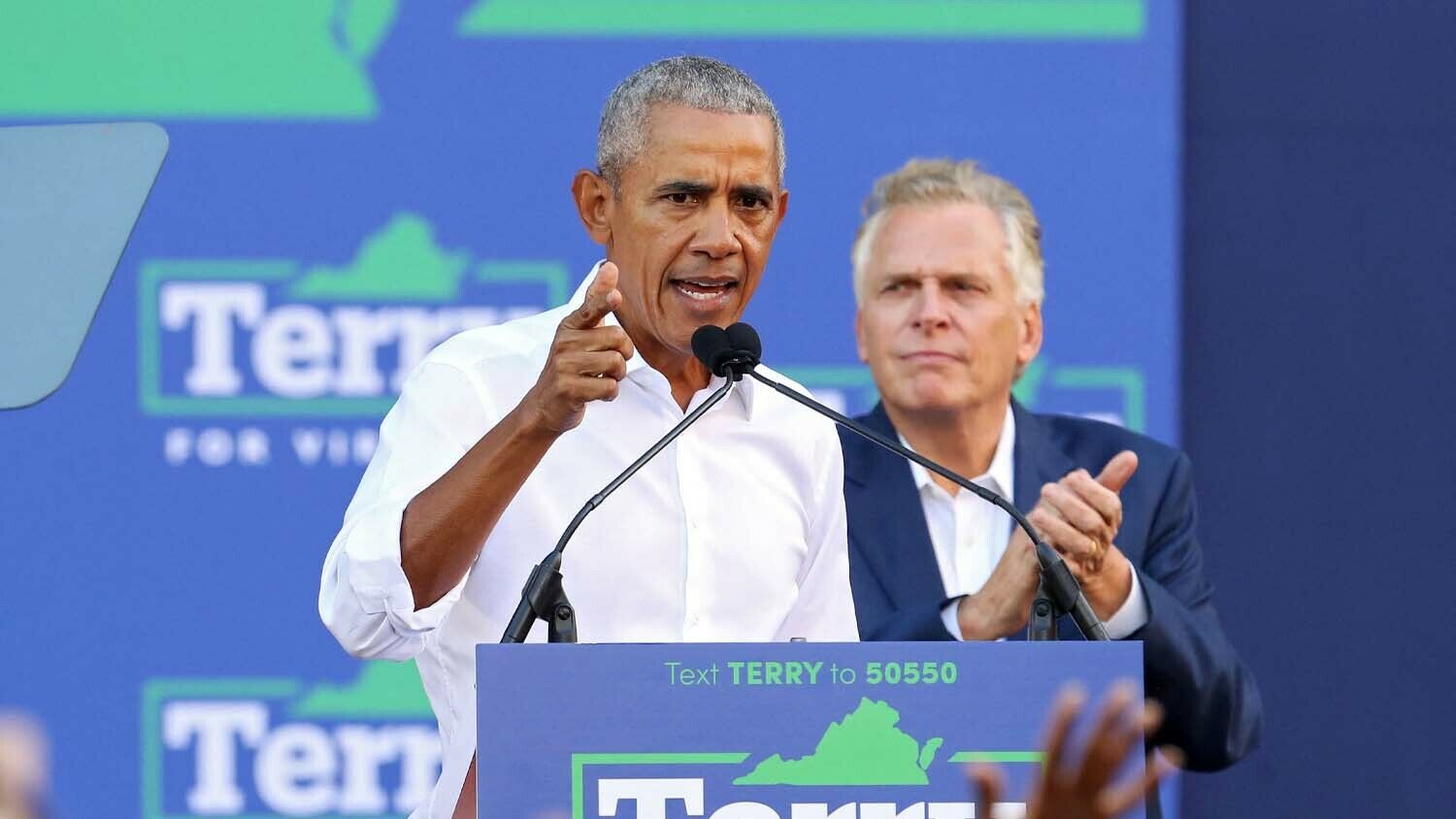 The radical left believes the ends justify the means, and the means are horrible.

On October 23, Obama was campaigning in Virginia for Democrat Gov. Terry McAuliffe. Criticizing the opposing nominee and conservatives in general, he said, “We don’t have time to be wasting on these phony, trumped-up culture wars, this fake outrage that right-wing media pedals to juice their ratings—and the fact that he’s willing to go along with it? Instead of talking about serious problems that actually affect serious people? That’s a shame. That’s not what this election is about.”

What is the “phony, trumped-up” fakery that Obama was setting us straight on? The outrage of Virginians and people across the country at a school board that covered for a student rapist—who then apparently raped again.

Obama was alluding to Republican challenger Glenn Youngkin: He has demanded that Loudoun County Public Schools superintendent Scott Ziegler resign. A lot of normal people think that’s the least he could do. He and the school board were pushing through a policy for allowing boys who say they are “transgender” to play girls’ sports and use girls’ bathrooms. A teenage boy wearing a skirt walked into the girls’ bathroom, restrained a 14-year-old girl, and committed horrible sexual acts on her.

The father of the girl was called to the school. Administrators told him to keep what happened quiet and let them handle it internally. He erupted in anger, and they called the police to confront him (but, apparently, not to confront the rapist).

The father, Scott Smith, took his daughter to the hospital that night, and nurses there confirmed that she had been raped. Smith went to the police. But he says he was again told by prosecutors, by lawyers and by others to keep it quiet in order to get “justice” for his daughter, so he did. It was only three weeks later that Loudoun County Public Schools board members held a meeting to continue pushing through their transgender policy. Smith attended. He didn’t sign up to speak, but he sat there and heard a board member literally say, “Our students do not need to be protected, and they are not in danger. Do we have assaults in our bathrooms or locker rooms regularly?” He heard the superintendent say, “To my knowledge, we don’t have any record of assaults occurring in our restrooms,” present a pro-transgender magazine article as proof, and state, “[T]he predator transgender student or person simply does not exist.”

Even still, Smith didn’t speak to the school board, but a pro-transgender woman in the audience began berating him. He argued back, police were called in, and they tackled him and hauled him away. He never had the chance to tell the board and the audience that his daughter had just been raped in the girls’ bathroom by a boy in a skirt.

The school board had an agenda, however, so it merely transferred that boy to another school. There, he sexually assaulted another girl.

On the same day that Obama gave his speech, a Virginia juvenile court judge found sufficient evidence to sustain the charges against the teenage rapist from Loudoun County Public Schools. He has now been convicted of both crimes.

Barack Obama, leader of radicals who have elevated grievance and complaining to a bizarre art form, says that if you are upset about this, your outrage is “phony.” He is not a normal person. He is a heartless monster.

Barack Obama’s concern, like that of the school board, is only for what this does to his agenda. His goal is to push fornication, adultery, polygamy, homosexuality, transgenderism and other sexual perversions until the institution of family is destroyed and America is fundamentally transformed. He isn’t going to let a little inconvenience like the rape of a child stand in his way.

This is the man who enjoyed adulation from the press throughout his campaign and presidency, and who used it to his great advantage. This is the man whom even some conservatives were afraid to criticize. They didn’t want to seem racist. In the first year of his first term, Fox News host Glenn Beck identified some of Obama’s motivation and said he was “racist” with “a deep-seated hatred for white people or the white culture.” Fox executives forced Beck to apologize. Some of them probably feared what Carlson said. But now many people are waking up to the fact that Obama is still pushing his agenda, now through Joe Biden, and he is weaponizing race, weaponizing supposed intolerance for sexual deviants, weaponizing economy-killing policies, weaponizing an epidemic, weaponizing everything he can to destroy what America has been—particularly those aspects of our culture that trace back to the family, and especially those aspects that trace back to the Bible.

We’ll see what is brought to bear against Carlson, but the fact that he pinned Obama as “a heartless monster” might mean that more people are realizing what a horrible mistake they made in allowing him to take power!

The attack on America is being exposed!

Radical leftists love to wave signs with hearts, peace symbols and rainbows while they chant slogans like “Love trumps hate.” But they are savage when it comes to anyone who opposes their agenda. They are heartless when it comes to someone victimized and raped by their horrendous social-engineering projects. They don’t believe in following God’s laws. Many or most don’t believe there is a God. That leaves only themselves.

And what ends they will go to in order to destroy what they hate and build what they want. The radical elites committed scandal after scandal throughout Obama’s presidency, Donald Trump’s campaign, Donald Trump’s presidency, the 2020 election, and the regime of pretender-to-the-throne Joe Biden and shadow president Barack Obama.

You are looking treason in the face!

Would they sacrifice a child being raped for their agenda? Would they sacrifice even deaths, direct and indirect, connected to their tyrannical coronavirus response? Would they saint a man who helped fund development of the virus, and, among other things, a lab in Tunisia that locks puppies’ heads in place so that a cage full of sand flies can eat them alive, and a set of experiments on orphan children with aids that killed 25 of them?

Barack Obama isn’t the only heartless monster. He has an inner circle filled with them.

Elites at Facebook, Google, Microsoft, Twitter and elsewhere are also too powerful to concern themselves with the powerless. The liberals love the animal rights groups—but not if they criticize Dr. Anthony Fauci’s connection to the puppy experiments. Google is censoring such criticism, just as it censors other facts that conflict with the radical agenda.

It’s easy to look back and say, If we had been in the days of our fathers, we would have seen the people who were heartless monsters. We would have stopped the German Empire, the Nazi movement, Maoist China, Stalinist Russia, the Khmer Rouge, the Rwandan genocide from torturing and murdering millions. Yet here we are, another generation of people who did not see and did not stop the heartless monsters.

We made a choice. We did not retain God in our knowledge (Romans 1:28). We chose not to believe Him and definitely not to obey Him. If we do that, God will turn us over—not just the radicals—to a reprobate mind. We will do and we will allow things that ought never to be done by any human being! This is why our nations are so terminally ill that a wretched perversion like the Loudoun County Public Schools school board is just another segment on the 6 o’clock news.

But millions of people are starting to see what an evil movement Barack Obama is leading. Parents Matter rallies are popping up around the nation. People are demanding that the superintendent resign. Obama can talk all he wants about “phony right-wing outrage,” but most Americans still believe that rape is evil. It’s no wonder a recent nbc News poll found 71 percent of Americans believe Joe Biden’s America is “on the wrong track.”

In his article “What Will Happen After Trump Regains Power,” my father explains that a prophecy in Amos 7:8-9 reveals that God is going to pass by America one last time to give its people a chance to repent. This means He is going to expose the radical left and restore an end-time type of King Jeroboam ii to power. We don’t know exactly how this is going to happen or how long it will take, but the exposure of Barack Obama and his regime has already begun. Even many Democrats are growing concerned about the overtly Communist tactics the radical left is using to multiply the debt, create inflation, upset supply chains, flood the country with illegal immigrants, and push parents out of their children’s lives. As things get worse, expect more and more people to wake up to the fact that Barack Obama’s “Hope and Change” campaign is really just a cabal of Communist monsters dead set on destroying America’s constitutional system of government!

As this last gasp of peace and freedom comes, don’t use it to go back to business as usual. Use it to repent toward God, to believe Him and willingly submit to His laws. It’s the only thing that will save your life in the short term from far greater horrors to come, and the only thing that will make your life meaningful and consequential in the long term, a life worth living.

Request your free copy of The United States & Britain in Prophecy, by Herbert W. Armstrong.