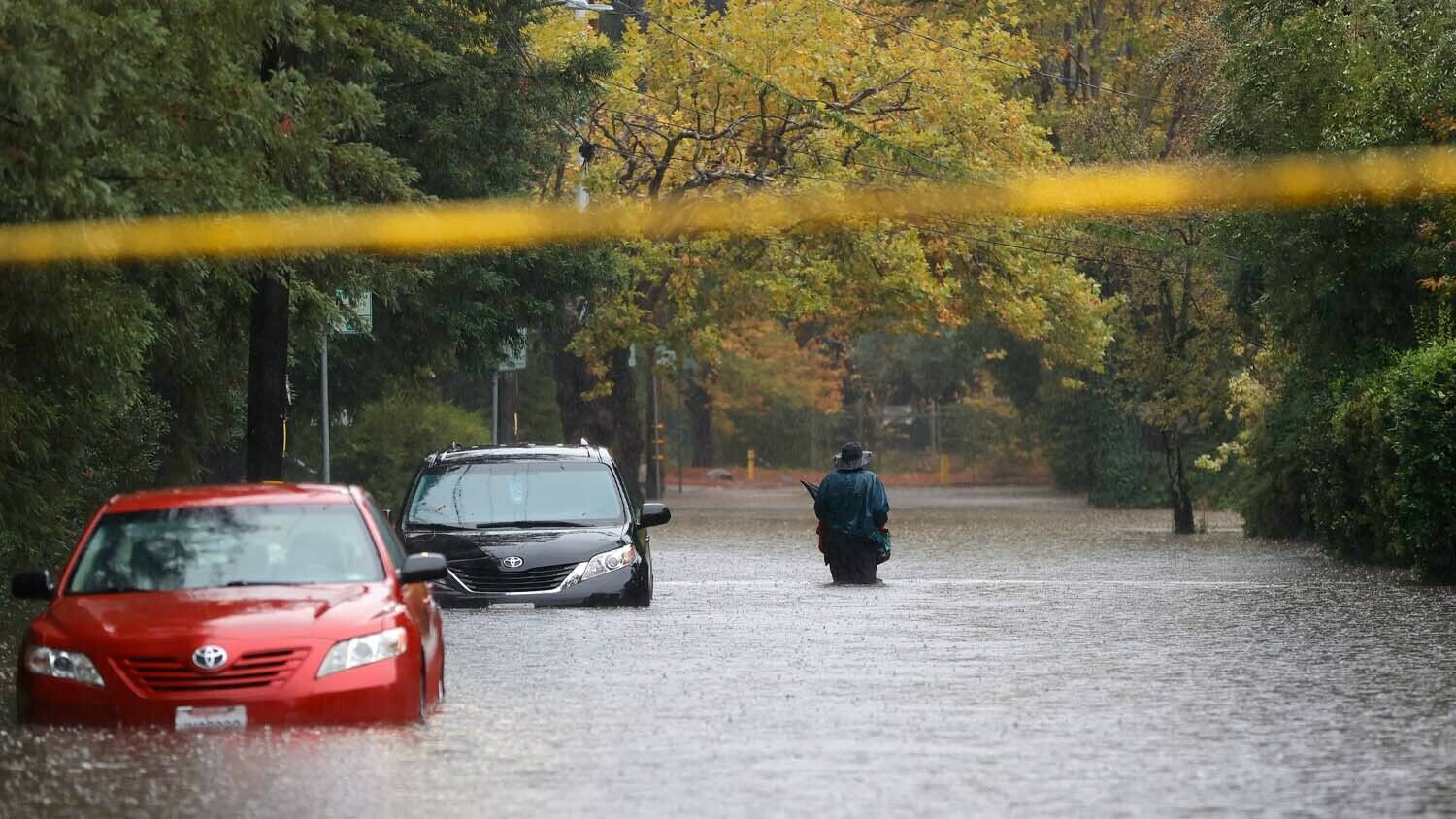 A pedestrian walks on a flooded street on October 24 in Kentfield, California.
Justin Sullivan/Getty Images

This year has brought some of the state’s largest fires, worst droughts and heaviest rainfall.

California’s 2021 water year, which ended on September 30, was the second-driest year on record and the driest year since 1924. The state received less than 12 inches of rain and snow, about half the average precipitation.

This summer was also California’s hottest recorded summer, exacerbating the drought. The combination of low rainfall and high temperatures put 87 percent of California in extreme or exceptional drought, according to the U.S. Drought Monitor. “The current drought is unprecedented,” said Jon Keeley, a U.S. Geological Survey scientist.

However, on October 24, 5.4 inches of rain fell on California in 24 hours. This was the wettest day in California since record-keeping began—topping the previous record of 5.3 inches in 1880.

While the rain was much-needed, the destroyed vegetation due to recent wildfires and drought, mixed with heavy rainfall, led to dangerous landslides. One landslide shut down Highway 70 “for a long duration.” A couple months ago, the Dixie Fire, the second largest in the state’s recorded history, was burning in this same area. Scientists call these extreme shifts in weather “precipitation whiplash” and blame climate change.

An ecologist at the University of San Francisco tweeted on October 24, “[Northern] California going, in one week, from the worst drought in recorded history to likely record-breaking October rainfall—is a good reminder that climate change isn’t just about warmer temperatures but a destabilized climate system.”

Climate change activists would have you believe voting for the Green New Deal and supporting the Paris Climate Accords will solve these weather disasters. Yet according to the 2021 BP Statistical Review of World Energy, carbon emissions fell more than 6 percent last year. If lowering carbon emissions should help solve these disasters, why did California break so many weather records this year?

“To say that climate change is causing all these violent storms is rejecting everything God says about this subject,” Trumpet editor in chief Gerald Flurry wrote in 2018. Multiple Bible passages reveal that God is in charge of the weather; no Green New Deal can change that.

“The Lord … hath his way in the whirlwind and in the storm,” Nahum 1:3 says. Job 37:11-13 confirm: “He loads the thick cloud with moisture; the clouds scatter his lightning. … Whether for correction, or for his land, or for love, he causes it to happen” (Revised Standard Version).

There is a way to end the disasters, and it doesn’t involve changing the type of energy we use. “Many scriptures show that God rewards and protects those who put Him first. If everyone in America would look to God, the plagues would stop!” Mr. Flurry wrote. To understand how natural disasters can be stopped, read Mr. Flurry’s article “The Deadly Climate Change Deception.”