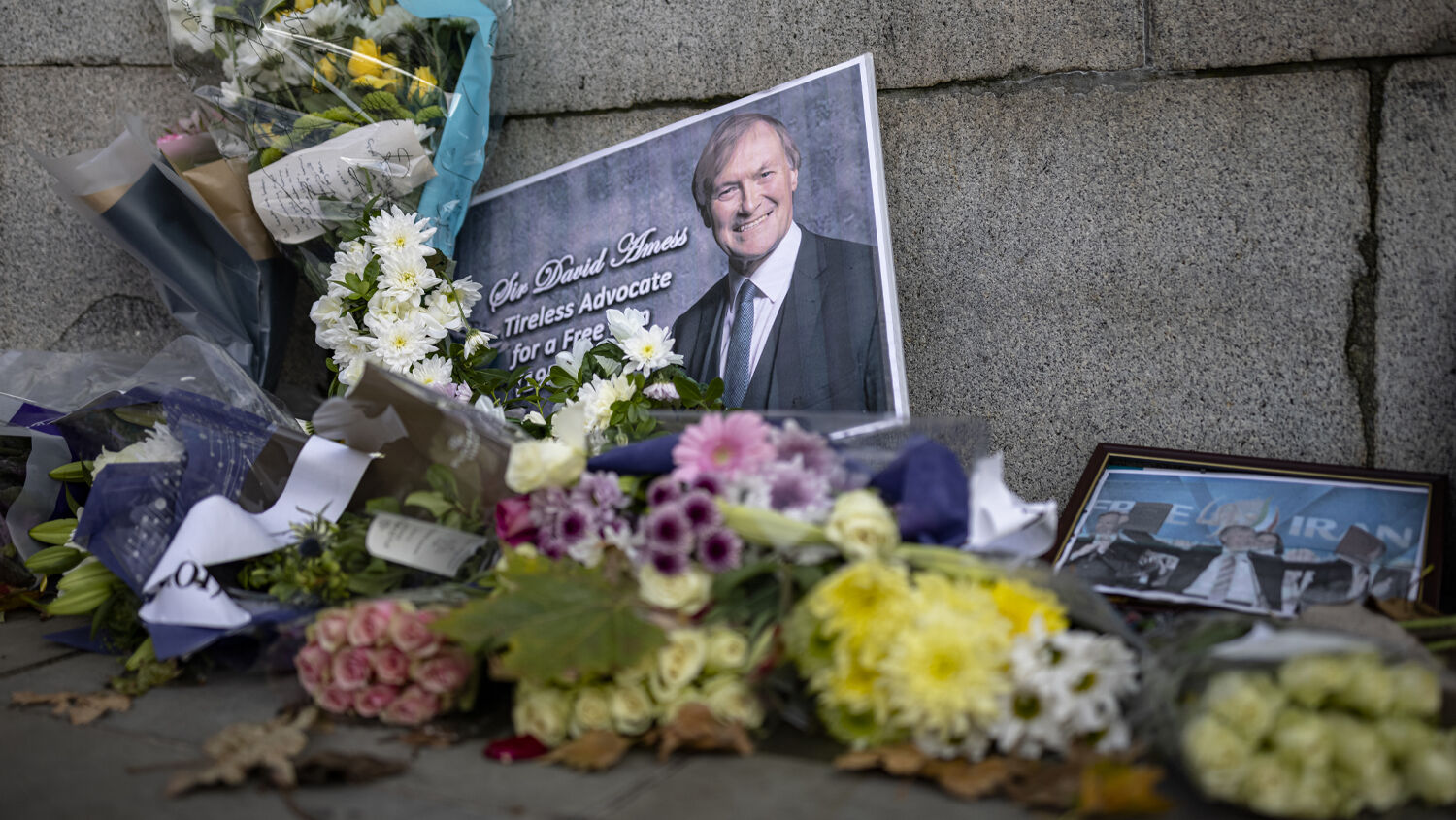 Imagine if a United States congressman had been murdered in the January 6 protests. I know it’s absurd; it wasn’t that kind of crowd, but bear with me. Fox News would be shut down, Donald Trump would probably have been designated a terrorist, and anyone who ever said anything vaguely right wing on social media would be under investigation by the Federal Bureau of Investigation.

Here in the United Kingdom, a member of Parliament was stabbed to death in broad daylight while meeting with his constituents on October 15. Ali Harbi Ali stabbed Sir David Amess 17 times in what news reports called a “frenzied attack.”

The attack has, rightly, generated a lot of outrage and calls for action. But almost no one is talking about the ideology behind the attack. The U.S. is heading in a similar direction, where the mainstream media is covering up what might have been a failed terrorist attack on a U.S. airliner.

The contrast with January 6 couldn’t be starker.

There’s little doubt by now that Sir David was murdered as part of an Islamist terrorist attack. Ali Harbi Ali, 25, was born in the UK and has a Somali background. He had already been referred to the government’s counter-extremism program over fears he’d turned to radical Islam. His friends say he became radicalized after watching online videos of the Islamist preacher Anjem Choudary. It seems Ali wanted to spread terror by murdering an M.P. and picked someone he could get to easily.

In the immediate aftermath of the attack, police warned that the country could face a wave of Islamist terrorists attacks carried out by young men radicalized online during lockdown—where they had no contact with mainstream friends or society who could have straightened them out. But this kind of talk soon stopped.

Instead, memorials to Sir David have focused on almost anything but the ideology behind the attack. Parliament is considering “David’s Law”—named after the murdered M.P.—which would ban anonymous Twitter accounts.

M.P.s receiving hate mail and death threats from anonymous accounts may be a genuine problem. But it has absolutely nothing to do with Sir David’s death. There’s no evidence Ali has an anonymous account on any social media platform or that he sent threats.

“I have watched dumbfounded over the past 72 hours at the near total disconnect between what we know about the suspected terrorist and the humbuggery from the media and political class around why this tragedy happened,” wrote Dan Wootton in the Daily Mail.

The U.S. is struggling with a similar willful blindness. On September 22, Khalil el-Dahr rushed the cockpit of his JetBlue flight, attacked a flight attendant, and tried to break into the flight deck. He urged crew members to shoot him and yelled in Arabic and Spanish. According to an affidavit filed by an fbi agent, one of the few words staff were able to make out was “Allah.”

I don’t know if Dahr was attempting an Islamist terrorist attack. But the fact that he was shouting “Allah” while attacking an airplane cockpit is a pretty significant detail. If he had yelled, “Make America great again,” it would have been all over the news. Instead, when the Washington Post wrote up its story based on the fbi affidavit, it left out the “Allah” detail. It didn’t want anyone to think this might have been an Islamist attack.

A large part of the reason is the radical left playing politics with terrorism. They’re trying to make far-right extremism seem a potent threat and make their opponents guilty by association. Also, the idea of widespread Islamic terrorism doesn’t fit with the left’s view of multiculturalism and diversity, so it must be minimalized.

Meanwhile, in the UK especially, the right are so scared of being accused of “Islamophobia” that they don’t want to go near the issue either.

It’s almost become cliché. If the attacker is far right, then he is a terrorist motivated by his ideology. If he’s Islamist, then the root cause lies somewhere else—maybe in mental illness or nasty social media posts.

This is dangerous. It puts politics before national security. A UK Intelligence source told the Telegraph that right-wing extremists “do not present the same risk as Islamists by any distance, by a factor of 4 or 5 to 1. Everyone was trying very hard to be politically correct and not Islamophobic. But the whole process has become unbalanced. More time has been spent than appropriate on right-wing extremism and not Islamism. There needs to be some honest appraisal about where the threat is actually coming from.” The UK has a watchlist of 43,000 potential terrorists. More than 90 percent are potential Islamists.

I looked back over some of our coverage of the terrorist attacks that have hit the West. It’s a story of our nations putting their heads in the sand more and more.

Immediately after September 11 terrorist attacks, Trumpet managing editor Joel Hilliker warned that America was waging a vaguely defined “war on terror.” The nation lacked the will to clearly define the problem. “Understand: The Trumpet staff would like as much as anyone to see America conquer in the war on terrorism,” he wrote. “But prophecy shows that it is, regrettably, underestimating its enemy.”

But at least back then America identified that there was a problem and that something needed to be done, even if it lacked the will to get to its heart.

Fast-forward to 2017 when Britain experienced an Islamist attack in the heart of Westminster. An Islamist terrorist mowed down 40 people on Westminster Bridge, smashed through the fence outside Parliament, and stabbed a policeman to death. Trumpet contributing editor Brad Macdonald wrote “The Deadly ‘Keep Calm and Carry on’ Mentality.” After the attack, the general response was, The best thing to do is nothing. Go back to normal. Keep calm and carry on.

Some of the scriptures Mr. Macdonald brought up are worth revisiting. In Isaiah 56:10, God warns that our “watchmen are blind: they are all ignorant, they are all dumb dogs, they cannot bark; sleeping, lying down, loving to slumber.” What a perfect description of our media and politicians who can be confronted by a threat but refuse to talk about it.

“People are just not alert to what’s happening in this world, and that includes the media,” Trumpet editor in chief Gerald Flurry said in his Dec. 22, 2002, Key of David television program. “God calls most of the watchmen just dumb dogs. They won’t bark! They won’t tell you what’s really happening, either because they don’t know—and even if they do know they won’t really tell you the blatant, scary truth about all this.”

The next verses explain why. “… The shepherds also have no understanding; they have all turned to their own way, each to his own gain, one and all. ‘Come,’ they say, ‘let us get wine, let us fill ourselves with strong drink; and tomorrow will be like this day, great beyond measure’” (verses 11-12; Revised Standard Version).

Mr. Macdonald wrote: “The leaders and media are more concerned about selfish interest than about the peace and safety of their nation.” That is exactly the case today.

This slumber is deadly. If we never acknowledge the problem, we’ll never find a solution. Mr. Macdonald wrote:

When crisis strikes, either individually or collectively, the natural tendency is to quickly move on, to “keep calm and carry on.” But this can be a fatal mistake. We must learn to stop, analyze the events, recognize the mistakes, meditate on the lessons, and then change the behavior that caused the crisis. The worst thing we can do is quickly return to the behavior that caused the crisis in the first place. Yet that’s what Britain and America do today. And so do many individuals.

The truth that few even now want to acknowledge is that our nations are experiencing a series of curses from God. There are things we are doing that are bringing these disasters upon ourselves. Britain and America have both made foolish decisions that have opened them up to these kinds of attacks. But God is also allowing it.

In that case, the problems will only get worse—until we’re forced to acknowledge them.

How much suffering will our nations have to go through until they come to repentance?

God only punishes us, individually or collectively, as much as He needs to. Turn to Him in genuine repentance, and the punishment will stop.

God has a great plan for Britain and America. He is working with both nations to the benefit of the whole world. To learn more about this plan and your role in it, read our free book The United States and Britain in Prophecy.