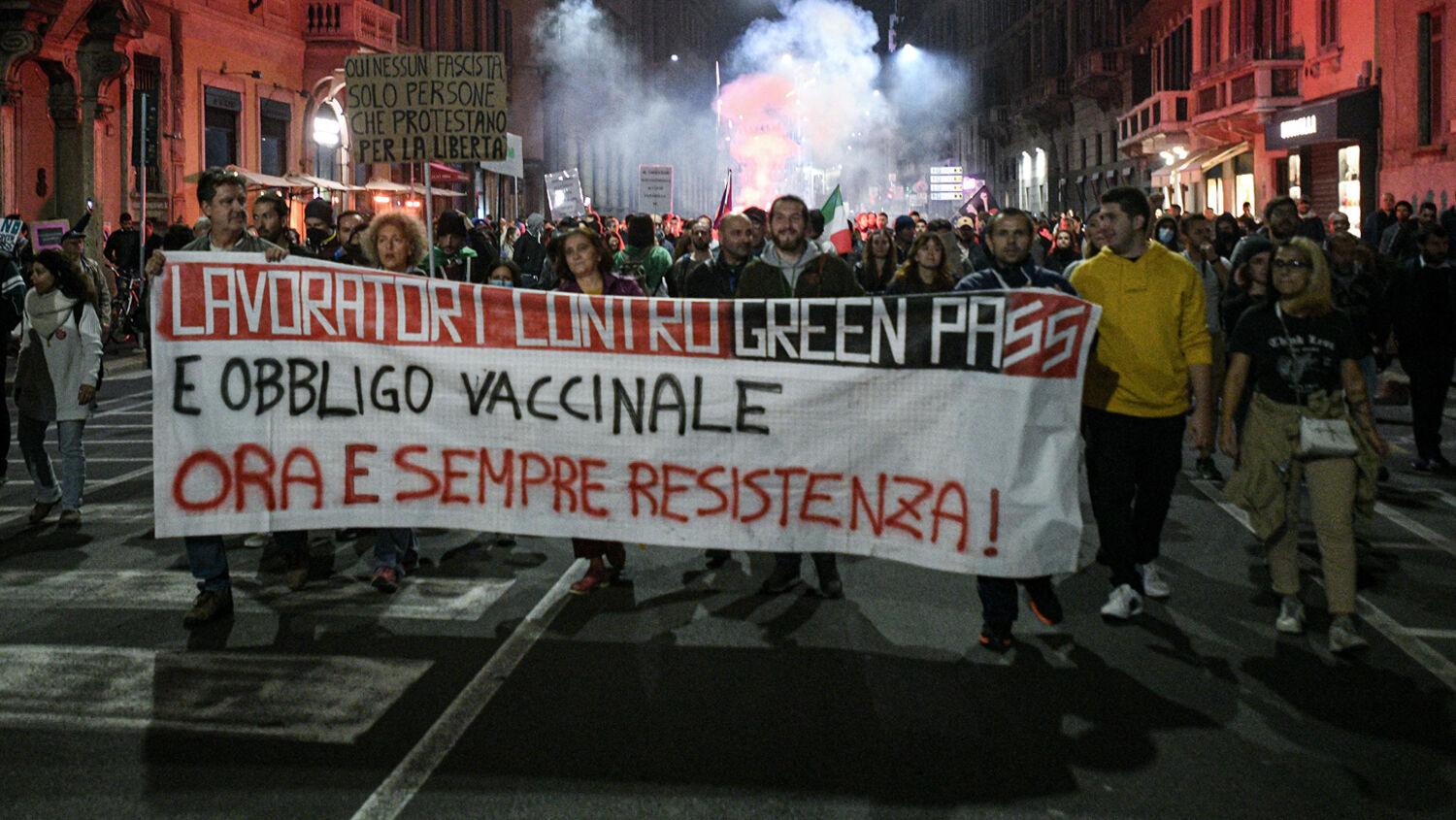 The strictest vaccine mandate on the planet went into force in Italy last Friday. Vaccine passports are now required to hold a job—any job. It’s not just health-care workers or hospitality or those working for large companies

All workers have to show their “green pass” to come into work, go to a restaurant, see a movie, or use long-distance travel. There are other ways to get the “green pass.” If you can prove you’ve recovered from covid-19 in the last six months you can get one. Or you can get tested—at your own expense—every 48 hours. One unvaccinated worker said it would cost him €200 (us$233) a month. And who knows how long these alternatives will be allowed.

Refuse a green pass and you won’t get fired—that would allow you to claim social security payments from the government. Instead, you’ll be suspended without pay.

In Italy, it’s get a green pass or starve.

But Italy isn’t the only place in Europe going to such extremes. The German state of Hesse passed a law allowing all businesses—including supermarkets—to bar the unvaccinated from their premises. The government is actively encouraging them to take this “opportunity.” Businesses that bar the unvaccinated will be able to forgo the costly social-distancing measures. Could the unvaccinated soon be unable to buy basic necessities?

Pushback has, understandably, been strong. But this brings us to another worrying element to the vaccine story.

The far right has been taking advantage of the backlash. At anti-vaccination mandate protests, some have shown up with swastika tattoos. Others carried Mussolini-era fascist slogans. Forza Nuova, a neo-fascist political party, is outspoken in its opposition to vaccine mandates. It’s one of Italy’s most extreme parties and is linked to anti-Semitism. It wants to repeal anti-fascist laws and aims to resurrect the type of close relationship with the Catholic Church that Benito Mussolini established. Its leaders have attended the major anti-mandate protests. Some of their leadership were arrested after demonstrations turned violent, with protesters storming a left-wing trade union headquarters and a hospital.

Germany faces a similar dynamic. The only party that opposes lockdowns and vaccine mandates is the Alternative für Deutschland (AfD). Some senior leaders in the party are outright neo-Nazis. Some have said that Germany should be proud of the “accomplishments” of its soldiers in World Wars i and ii; they’ve called for Holocaust memorials to be torn down. The idea that Germany should be proud of its military heritage and must revive that tradition is part of what this party is.

An even more extreme movement, the Reichsbürgers, have played a major role in the anti-mandate, anti-lockdown movement in Germany. They claim that the federal government is illegitimate and the German empire is the true, rightful German state.

As you can probably tell, I have a lot sympathy for the anti-mandate protesters. Forcing people to choose between a vaccine they don’t want and their family starving is pure evil. I’m sure the governments and mainstream media are exaggerating the far-right presence at the protests to try to discredit the whole movement.

But the far-right presence is undeniable. It’s not the protesters’ fault; they can hardly stop the neo-fascists showing up. Once they’re there, they grab the limelight.

Merriam-Webster defines fascism as “a political philosophy, movement, or regime … that exalts nation and often race above the individual and that stands for a centralized autocratic government headed by a dictatorial leader, severe economic and social regimentation, and forcible suppression of opposition.” Most of that applies directly to pro-lockdown governments around the world. For years, the Trumpet has warned that in times of crisis people tend to look for a strong government, which they will allow to take extreme actions far beyond the usual norms. We’ve seen this exactly. The threat of this type of fascism is clear.

But it is not the only threat.

However, the government continued to lie and cover it up. As theTrumpet.com managing editor Brad Macdonald and I wrote at the time: “Think about the consequences of German officials’ deception. It is destroying the trust between Germany’s government and the public. What happens when the majority of Germans realize they have been deceived? What happens when the majority of Germans lose confidence and trust in mainstream leaders?”

Yet the effect of the vaccine mandates could be even worse.

Already it is clear that the vaccines are not as effective at stopping covid-19 as advertised. Nor are they as safe as the public was led to believe. This is now being acknowledged by mainstream experts, even if it isn’t being picked up by the mainstream press. The United Kingdom’s expert committee on vaccines refused to recommend usage for 12-to-15-year-olds. The United States Food and Drug Administration refused to endorse booster shots for all U.S. adults. At a public hearing, experts talked about the risks of the vaccines.

What if they turn out to be a mistake—one too big to be hidden? Then every mainstream, established, elite source will have been proved wrong. And the only institutions proved right, in Italy and Germany, will be the neo-fascists and neo-Nazis.

What happens if people come to believe they’ve been forced by their government to inject a dangerous substance into themselves and their children? If that happens, it will shake the whole world.

But Europe has embraced vaccine mandates and lockdowns much more widely. It will shake Europe most of all. Here is another path to fascism. A public failure of the vaccine would discredit every major institution and all of mainstream politics. It would be the biggest political crisis since the end of the Cold War. It would mean a radical shakeup in the media, in government—even in the Catholic Church, which has generally been supportive of Italy’s green pass.

Whichever path it takes, Europe is heading in a dangerous direction.

The coronavirus has proved to be a world-changing catastrophe, mostly because of the political response to it. But as Trumpet editor in chief Gerald Flurry wrote in July 2020: “One of the most important effects of the global panic over covid-19 has been almost overlooked. Europe’s response to the pandemic is accelerating the fulfillment of one of the most crucial end-time prophecies of your Bible! The coronavirus is hastening the arrival of the prophesied Holy Roman Empire.”

“The Bible says 10 kings will rise in Europe in this end time, led by one overarching strongman,” he wrote. “These kings will form the Holy Roman Empire. The coronavirus pandemic is helping usher in these 10 kings! We need to be thinking about these prophesied kings, who are rising now. As a result of the recent crisis, various European leaders have taken dictatorial measures.”

The Bible prophesies a radically different Europe—one led by dictators not democrats—a Europe so powerful that it prevents you from buying or selling without the approval of the government. (Read “Coronavirus and the Mark of the Beast” for more information on what exactly this prophesied mark is.)

Whatever happens next, Europe is moving in that direction. Those demanding vaccine mandates are looking for strong leadership that will defy all the usual norms of democracy. Many of those on the other side want similar strong leadership; they just want to lead in a different direction.

In both Germany and Italy, the danger of neo-fascism is real. In Italy, it crops up regularly in mainstream politics. The center-right candidate in Rome’s mayoral elections, Enrico Michetti, complained that the Holocaust was given more publicity than other atrocities because the Jews “control banks and a lobby capable of deciding the fate of the planet.” He also called for the Nazi-style Roman salute to be used as a typical greeting, as it is more hygienic than handshaking. And he has called for dictatorships to be set up in times of crisis. “When the situation degenerates, it enters chaos, a strongman is needed to put the country back in order,” he said in one of his podcasts.

A deputy economy minister was forced to resign over the summer after calling for a park to be renamed after Mussolini’s brother.

But it isn’t just the fringe. Matteo Salvini, one of Italy’s most popular political leaders, echoes Mussolini without actually endorsing him. He’s used famous Mussolini quotes, spoken from the same balcony as Mussolini, and copies Mussolini’s photo ops and interactions with the public. Meanwhile, Mussolini’s granddaughter and great-grandson are both politicians for a leading fringe-right group. Caio Giulio Cesare Mussolini told the Associated Press, “I met a 95-year-old person who had a version of that period very different from the one you find in public opinion.” Mussolini’s birthplace is a popular tourist destination, where you can buy souvenirs of the dictator.

Few Germans venerate Adolf Hitler that way. But the far right is rising. The AfD won 10 percent of the vote in last month’s federal election. But this hides major regional variations. In two states, they were the largest political party. A series of scandals have exposed a strong undercurrent of far-right extremism in the German armed forces. Its special forces have had so many that the whole unit has been threatened with dissolution. Germany’s intelligence agencies are suspected of funneling money to far-right groups instead of investigating them. The police have been caught using official databases to send threatening letters to left-wing politicians. The exact culprit was never found, suggesting others in the institution were covering for him. Far-right extremism is clearly bubbling below the surface. And as Hesse shows, it doesn’t take much for people to reach for an extreme solution.

The book of Daniel describes this coming strongman: “And in the latter time of their kingdom, when the transgressors are come to the full, a king of fierce countenance, and understanding dark sentences, shall stand up. And his power shall be mighty, but not by his own power: and he shall destroy wonderfully [mightily, it should read], and shall prosper, and practise, and shall destroy the mighty and the holy people” (Daniel 8:23-24). He’s going to be a very different leader from the ones we’ve seen for the last few years.

covid lockdowns and vaccine passports have shown us how easily such a leader could come to power. However he gets into office, this type of European leader will shake the world. To learn more about him, read our article “Coronavirus and the Holy Roman Empire.” This leader plays a critical role in Bible prophecy and will change the world. These changes will lead Europe in a dark direction. But they’re part of a plan laid out in the Bible for a wonderful purpose.