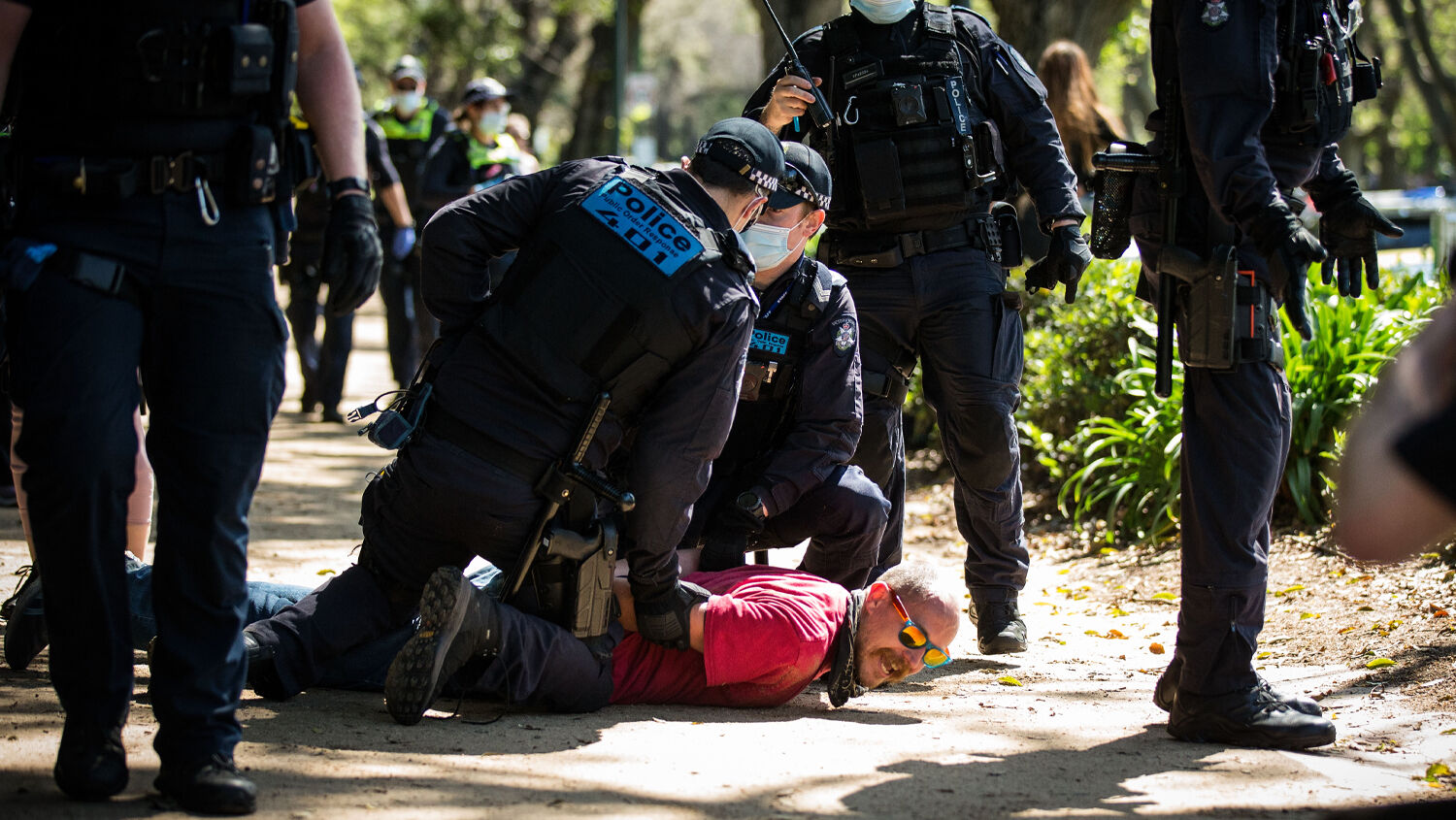 A protester is arrested by members of Victoria Police on October 02 in Melbourne, Australia.
Darrian Traynor/Getty Images

Video footage of Australian police beating, choking and body-slamming ordinary citizens for violating lockdown decrees looks like something you would expect from a Communist dictatorship.

Australia is beginning to look like Communist China. Remember the disturbing reports coming out of China at the beginning of the covid-19 pandemic? We saw images of government agents in hazmat suits forcing people into quarantine boxes, images of people literally welding apartment doors closed with people inside. At the time, Dr. Anthony Fauci reassured us nothing like that could ever happen in a Western democracy. Yet he was wrong. Similar things are already happening in Australia, and many people realize that if the government gets its way, the United States will be next.

Australia is still nominally a democracy, but millions of its citizens are being tracked with apps to make sure they are not violating covid-19 lockdowns. In some Australian states, you must have your phone scanned before entering a church. Out-of-control law enforcement officials in cities like Melbourne and Sydney are beating, choking, body-slamming, pistol-whipping and wounding ordinary citizens with rubber bullets for not wearing masks outside or for violating lockdown decrees. A pregnant mother was handcuffed, arrested and hauled away in front of her children for simply making a Facebook post about a planned anti-lockdown protest. Another woman wearing a sign appealing to the constitution of her country was arrested and put in a police vehicle with her child screaming beside her.

Australia has deployed hundreds of soldiers to help enforce covid-19 lockdowns, and disturbing video footage shows people without masks being tackled by mobs of police officers. Armed police teams are raiding buildings where people have broken social distancing protocols, arresting people inside at gunpoint. This is the type of footage that comes out of socialist dictatorships like Cuba, China and Venezuela, but nothing like this has ever occurred in Australian history. People are being locked in their homes at the will of their state governments, while those who are brave enough to stand up for the freedoms they thought they had are being aggressively pursued, beaten, arrested, fined and imprisoned.

All of this is being done in the name of health and well-being. But oppressive and tyrannical governments always put nice-sounding names on their policies. And as we watch the beatings and imprisonments of ordinary people very similar to us, we are left with this question: Is “democratic” Australia actually any more free than the Communists?

“Yet again today, on the streets of Melbourne, we see extraordinary police brutality and violence against ordinary citizens,” said federal Member of Parliament Craig Kelly. “The police force in Victoria is out of control. … We need an urgent judicial inquiry to find out what has gone wrong and what has happened that resulted in a police force in Australia using such extreme violence against unarmed citizens.”

As Americans watch in disbelief, Florida Gov. Ron DeSantis questioned whether the United States should change its diplomatic relationship with Australia. In a recent speech in Tampa, he pointed out that after 18 months, the Australian government continues to enforce lockdowns using its military. “That’s not a free country. It’s not a free country at all,” he said. “In fact … I wonder why we would still have the same diplomatic relations when they’re doing that. Is Australia freer than China—Communist China—right now? I don’t know. The fact that that’s even a question tells you something has gone dramatically off the rails with some of this stuff.”

Despite Governor DeSantis’s concern about Australia’s drastic turn toward tyranny, Joe Biden’s regime seems to be looking to Australia for inspiration. Barack Obama praised Australia’s gun ban in 2015, and Joe Biden’s new, unconstitutional covid-19 vaccine mandate for 100 million Americans is tailored to bring Australian-style tyranny to the United States. In fact, the high level of gun ownership in the United States is probably the main reason the Biden administration has not been more authoritarian than it already has been. Americans have a means to push back against tyranny in a way Australians and Chinese do not.

In both Australia and the United States, politicians, bureaucrats and public health officials are using the existence of covid-19, a slightly more potent version of the flu, as an excuse to blot out freedom of speech, freedom of assembly, freedom of religion, and many other freedoms. Millions of people are going along with this sinister attack on their freedoms because the “experts” tell them it’s the only way to save themselves from a devastating pandemic. There is no evidence to support these claims as can be ascertained by the fact that the covid-19 pandemic is no worse in western Australia (where there are minimal lockdowns) than it is in eastern Australia (where there are draconian, Communist-style lockdowns). But society is entering a dangerous time where people worship the whims of their leaders more than they rely on factual logic.

“There is a deadly reason so many people are adopting insane ideas,” my father wrote in “A Dangerous New Age of ‘Worshiping the Will.’” “The Apostle Paul wrote about this very subject: ‘Let no man beguile you of your reward in a voluntary humility and worshipping of angels [demons, it should read], intruding into those things which he [has] seen [that is the correct translation], vainly puffed up by his fleshly mind …. Which things have indeed a shew of wisdom in will worship …’ (Colossians 2:18, 23). … Paul reveals what happens when you worship the human will: It leads to essentially worshiping demons! That is because the human mind is so vulnerable to Satan’s broadcasting, deception and influence, especially when full of vanity. … The radical left is casting aside the foundational law of the land, telling us that it is just getting in the way. We don’t need that old law, they insist. We know what justice is. You can trust us! Such reasoning paves the way for tyrants!”

Such will worship has already stripped Australians of most of their God-given rights, and the United States is not too far behind. The only way to inoculate yourself against this type of will worship is to be rooted in the truth (see Colossians 2:6-8). At this point, only God can save Australia, the United States, and the other nations that descended from ancient Israel, from the tyranny of the radical left within and lurking enemies without. Scripture indicates that He will do so one more time to give people a chance to repent (Amos 7:8).

When the United States surges one last time, as prophesied, do not let that unmerited pardon go to waste! If the tyranny raging toward you hasn’t already affected your life, it soon will.