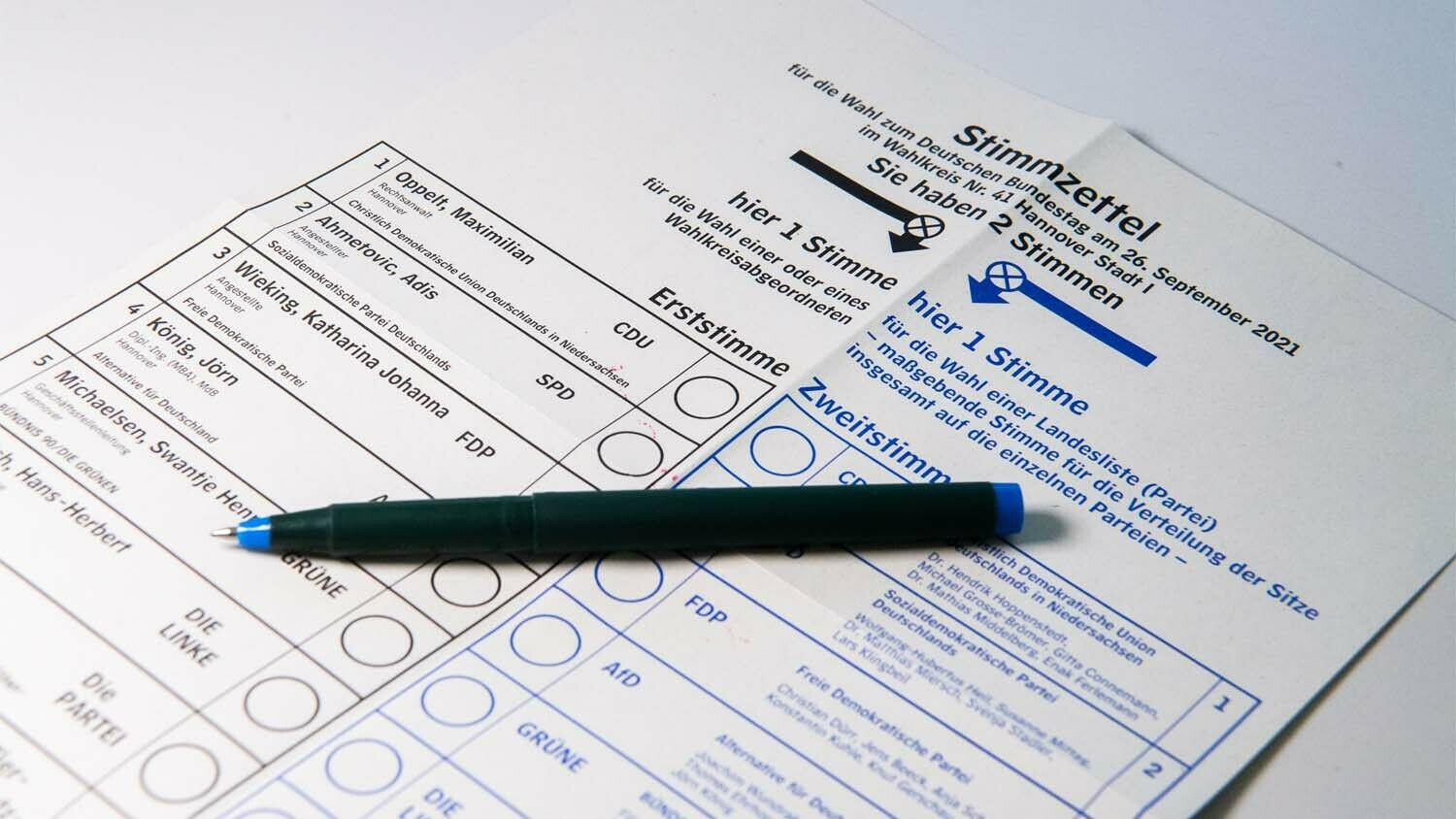 A sample ballot for the 2021 federal election lies on a table.
Julian Stratenschulte/picture alliance via Getty Images

In just under a fortnight, Germany faces an election unlike any in its history. The mainstream media spent the run-up to the last election, in 2017, talking about how “bland” and “boring” the election campaign was. Afterward, they called it an earthquake.

This time, they’re talking about the earthquake already. “Is Germany on the Verge of a Political Earthquake?” asked a headline in National Interest this week.

Usually, the only question is, Which of two main parties will be running Germany after the election. This time, it’s more like, Which combination of three parties will run the country—for how long, and how long will the coalition negotiations take? Will a stable government even be possible? Voters face what the Economist called a “bewildering array of possible coalitions.”

The one gaining the most attention is that the East German Communist Party could return to power. Rebranded as Die Linke, or the Left, the Communists could be a junior partner in a socialist-green coalition. Its leader, Janine Wissler, only gave up her membership of a radical Trotskyist group a few months ago.

This coalition already governs Berlin, Germany’s capital, where it has waged war on the rule of law. National Interest wrote:

[T[he three parties in Berlin passed a law that forced landlords to massively reduce rents on existing leases. In fact, the law represented nothing less than the partial expropriation of real-estate owners. Germany’s highest court declared the legislation unconstitutional, but the spd [Social Democratic Party] and Die Linke now want to introduce a similar law that would apply to the whole of Germany. Political freedom in Berlin is also coming under intense pressure, especially the right to demonstrate. While left-wing demonstrations are generally approved, demonstrations by critics of the government’s coronavirus policies, for example, are banned or broken up with brutal police force. What is happening in Berlin provides a foretaste of how Germany as a whole will change if the spd, Die Linke, and the Greens come to power.

The polls point to a conflicted Germany. A large number want something radically different—even to the point of going back to East Germany’s Communists. They’re rejecting the standard left and right parties. On the left, people have been quitting the Social Democrats for the less conventional Greens or the Left party. The right has seen the rise of the Alternative für Deutschland and now the Free Voters, another fringe-right party starting to make waves.

But there’s also many who crave stability. When polls ask voters who they want see as Germany’s next chancellor, Social Democrat leader Olaf Scholz has a commanding lead. One former United States ambassador reportedly said that Scholz’s personality “makes watching water boil seem exciting.” Yet he’s the only candidate not to have made any major gaffes. There’s clearly a yearning for stability and competence.

We have spent years forecasting radical political change in Germany. That change has not yet come. But with each election cycle, Germans’ discontent with the status quo and current system becomes more obvious. A country that historically has prized stability and consistency risks coming close to becoming ungovernable—where there are no straightforward coalitions, and all the options are “bewildering.”

Germany wants both radical solutions and stability. They want to be rid of the standard politicians, yet still want an experienced, competent leader. But all they’re getting is a bewildering array of coalition options. How do you satisfy these contradictory demands?

The Bible tells us how they’re going to try.

Daniel wrote his prophetic book for the end time (Daniel 12:9). It prophesies events that have now happened; they were prophecy for him, but now history for us. But even these historical events are types of what is still ahead.

Daniel 8:23 describes the rise of “a king of fierce countenance, and understanding dark sentences.” Verse 25 says he will be defeated after he stands up “against the Prince of princes,” revealing the time frame for this fierce king’s reign: He will come to power in the very end time, right before Jesus Christ’s Second Coming. Another passage in the same prophetic book tells us how this man will come to power (Daniel 11:21-31).

Most Bible commentaries correctly say this passage refers to Antiochus Epiphanes, who reigned around 175 to 164 b.c. Jesus Christ clearly refers to these verses in Matthew 24:15, but He talks about them not as something that had already happened but as something that will happen in the future.

If this prophecy were entirely fulfilled by Antiochus Epiphanes nearly two centuries earlier, why did Christ tell His disciples to watch for this event? This prophecy had an ancient fulfillment, but it will also have a modern one. Like many other prophecies, it is dual. This refers both to the ancient Antiochus and to a modern Antiochus.

Daniel 11:21 prophesies that the European people “shall not give” this Antiochus “the honour of the kingdom: but he shall come in peaceably, and obtain the kingdom by flatteries.” The Jamieson, Fausset and Brown Commentary says that “the nation shall not, by a public act, confer the kingdom on him, but he shall obtain it by artifice, ‘flattering.’” Barnes’ Notes on the Old and New Testaments states, “[I]n other words, it should not be conferred on him by any law or act of the nation, or in any regular succession or claim.”

Look at Germany right now. In your lifetime, have Germans ever been more worried about their political situation? They see that they are beset by potential crises. They could soon be hit by a new wave of migrants from Afghanistan or a renewed economic crisis.

They want a strong leader; yet the standard political system shows no promise of giving them one.

Circumstances are almost perfect for someone to come to power in an unorthodox way.

“This is revealing insight,” wrote Trumpet editor in chief Gerald Flurry in the January 2020 Trumpet issue. “The prophesied strongman operates on a high social level; he is capable of understanding and solving complex issues and questions. He is brilliant and sophisticated, and he has intellectual depth and power. The context shows he enjoys notoriety and fame for it.”

This leader could fulfill both the desire for competence and radical change.

“This prophesied leader may well exploit this frustration and confusion by rallying a coalition behind him and vaunting himself to power,” he continued. “This would take a lot of intelligence and calculation; it would require unusual skill to deceive people in high places with flattery. But the prophesied Daniel 8 man will do it magnificently. Adolf Hitler was a man of mental strength, but he was not as adept at deceiving people as this coming strongman will be! This leader will come as an angel of light.”

The stage is perfectly set for a key part of end-time Bible prophecy swiftly to be fulfilled.

To understand where Germany’s radical changes are leading, and how it fits into God’s plan, read our free booklet A Strong German Leader Is Imminent.