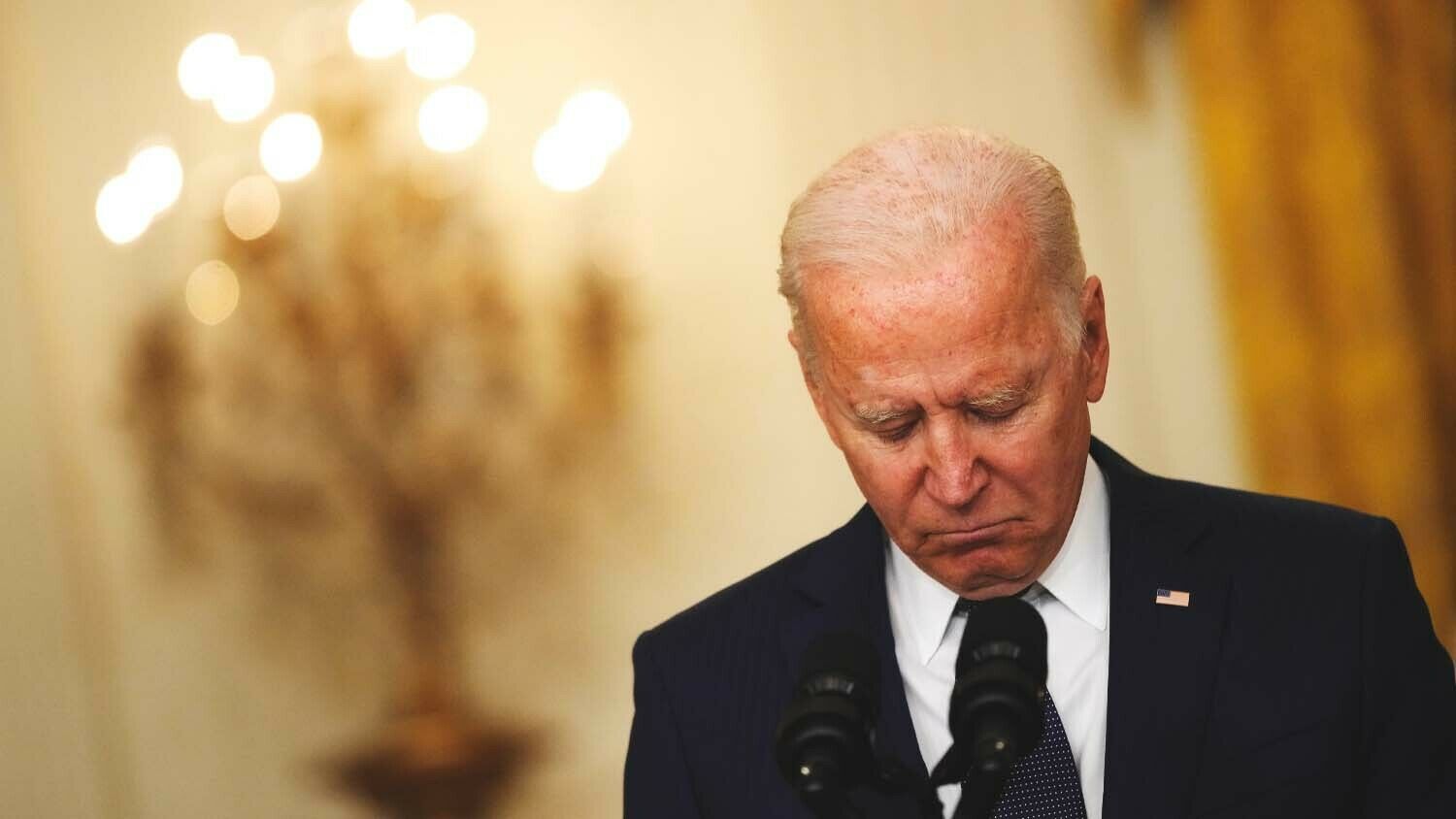 The difference between Kabul and Saigon is that the American president rescued all the Americans in Vietnam.

“Can Joe Biden save the world?” That’s what an interviewer asked Biden during his second campaign for president in 2008. He answered without hesitation: “Yes.” He failed to win enough votes in 1988, in 2008 and in 2020, but on the third attempt, his campaign seized power regardless. Joe Biden now has what he has desired for decades: the power to change the world. With it, he has created a catastrophe worse than the fall of Saigon.

And now it’s official. The United States military declared its withdrawal complete yesterday with a Marine general announcing that the last U.S. plane had departed Afghanistan. Dozens or hundreds of Americans are still there. Thousands of Afghan allies are still there. And so is a radical Taliban regime more powerful than it was when the first U.S. troops arrived 20 years ago. August 31, 2021, is a date that will live in infamy.

Biden’s unnecessarily disastrous retreat was punctuated last week on August 26, when the ongoing mayhem at the airport in Kabul erupted in mass murder. Terrorists easily penetrated the city and the Taliban checkpoints, and one approached a gate where American troops were checking evacuee documentation. Then he detonated his bomb. The blast and subsequent gunfire from other terrorists killed 169 Afghan civilians and 13 American Marines, soldiers and a Navy corpsman.

Biden’s Afghanistan withdrawal was already a fiasco. Islamist Taliban terrorists smelled blood and conquered the country in almost a weekend. Islamist isis-Khorasan terrorists smelled blood and blasted apart the loved ones of hundreds of Americans and Afghans. America repeatedly responded with abject weakness. He has officially presided over, not the saving of the world, but a debacle more humiliating than almost any other in U.S. history.

America still remembers the shameful black-and-white scenes: A sea of Vietnamese pushing against the gates, trying to climb the walls. American Marines pushing them back. A grainy shot showing a single U.S. helicopter atop a building—and impossible numbers of Americans filling the rooftop and a narrow ladder toward safety. Later we read in black and white that the victorious Communists murdered tens of thousands of those desperate Vietnamese.

Now we have seen our own full-color fiasco. It’s Saigon times a hundred, at least, in terms of shame, injustice and weakness. And whereas President Gerald Ford’s shameful evacuation rescued all American civilians, Joe Biden and his staff have said for weeks that the U.S. will leave many behind in a country that is dominated by the Taliban. This is under the active decision-making of the man who said he could “save the world.”

Biden blamed Donald Trump for making the agreement with the Taliban to withdraw U.S. troops from Afghanistan. He blamed Afghan President Ashraf Ghani for failing to unite his people against the Taliban. He blamed his own generals for the bizarre decision to pull the military out of Bagram Air Base. But we are now learning that the Central Intelligence Agency warned him that the Afghan Army might collapse to the Taliban in a matter of days, and Gen. David Petraeus (Ret.) warned him to keep at least 2,500 troops in the country for security reasons.

We are learning that Biden rejected Pentagon and cia proposals for conducting an orderly retreat. So who is he listening to? Two anonymous sources have told Politico that behind the scenes, Secretary of State Antony Blinken and National Security Adviser Jake Sullivan are the ones truly “running the Pentagon.” Both men are Obama administration alumni who were intricately involved with Iran nuclear negotiations. It looks like Obama’s people have enough power to overrule other high-ranking leaders.

“We are slowly learning the full extent of Joe Biden’s culpability for the Afghanistan debacle,” the Telegraph’s Nick Allen wrote. “Joe Biden now has not only Afghan, but American, blood on his hands. And it will stain his presidency forever. … Kabul airport will be Mr. Biden’s Saigon. His Iran hostage crisis. His Watergate. And it is no one’s fault but his own.”

Biden rejected alternatives to his hasty withdrawal plan. He was determined to quit the country before the 20th anniversary of the 9/11 terrorist attacks. When the Taliban said to make it August 31, he complied.

When it comes to shameful American evacuations conducted disastrously, Biden’s Kabul stands out.

But instead of following this basic, logical plan, Biden left $85 billion in weaponry, equipment and actual cash in Afghanistan, knowing full well that the cia believed the Taliban was about to take over. America even reportedly allowed the Taliban to capture its database, which is believed to identify thousands of people who worked with the U.S.: translators and drivers—and troops and pilots.

Instead of taking responsibility for this debacle and the 13 U.S. troops and 169 Afghans killed in the Islamic State attack, Biden is blaming others and trying to focus us instead on America’s opportunity to partner with the Taliban against the Islamic State.

Is that his next step to “save the world”?

None of this makes any sense until you realize what is motivating these decisions. Since Biden moved into the White House, the Trumpet has been telling you to watch his former and current boss, Barack Obama. Obama has been quiet about the current Afghan catastrophe, but if you understand Obama, you will understand Biden’s foreign policy.

Obama spent eight years as president enacting one counterproductive policy after another, confusing and infuriating many Americans. One example was his 2014 prisoner exchange of five Taliban members from Guantanamo Bay in return for one U.S. Army deserter, Bowe Bergdahl.

Political commentator Dinesh D’Souza was one of those who said at the time that there is a difference between doing something disastrous because you are incompetent and doing something disastrous because you intend to. He used the example of former U.S. President Jimmy Carter forcing the shah of Iran out of power, which created the current Iranian fanatical terrorist regime that is radicalizing Egypt, Iraq, Afghanistan and the entire region as it also pursues nuclear weapons. Carter, he said, was incompetent: Obama is not.

“Obama has an ideology,” he said, “and his ideology is ‘We the United States, in Iraq and Afghanistan, and then historically, in Cuba and Guatemala, and on and on: We’re the bad guy.’ … And if we are the bad guy, the people fighting against us, must be from their point of view, freedom fighters.”

Like his father, Barack Hussein Obama Sr., his mentor, Frank Marshall Davis, his pastor, Jeremiah Wright, and his friend Bill Ayers, Barack Hussein Obama Jr. views Anglo-American domination as wrong and as the greatest threat to the rest of the world. He dedicated his political life and his presidency to “fundamentally transforming” the United States from what it has been into something humbler, weaker and wildly more liberal.

Bowing before other world leaders, promising “outreach” and compromise, helping force out Egyptian President Hosni Mubarak to the benefit of the Muslim Brotherhood, empowering Iran by withdrawing from Iraq, propping up Iran’s fanatical regime with a nuclear deal, propping up the Communist Cuban regime with diplomatic outreach, making “red lines” meaningless in Syria, opening the American border, allowing Russia to annex Crimea, weakening America’s relationship with Britain and Israel, tying America to hurtful trade deals and climate agreements, spying on Americans and their leaders, turning Americans against each other: These were accomplishments for Obama.

Now he controls much of the Biden team. Making the $2 trillion spent in Afghanistan pointless, with an $85 billion tip for the Taliban, is also an accomplishment if you are intentionally trying to weaken a power you hate: America.

Perhaps the most brilliant part of this strategy is that Obama’s accomplices pulled it off at a time when Obama himself is unlikely to be held responsible. Pulling out of Afghanistan is one policy Biden has consistently insisted upon, and although Obama largely controls Biden’s team, he appears to have allowed Biden to push himself deeper and deeper into disaster in Afghanistan. Republican and Democrat insiders in Washington, D.C., say that Obama would probably be happy to let his former vice president crash out of the White House. That would leave Kamala Harris to take power, and we know that her political support has to come from somewhere other than voters, only 3 percent of whom ever supported her 2020 presidential candidacy.

Catastrophes like the fall of Saigon and the fall of Tehran may have resulted from political incompetence. The fall of Kabul did not. It resulted from an intentional, orchestrated attack on the United States of America from within. You are going to see this hidden fact revealed more and more in the coming months.

“Many people can see that these are disastrous decisions,” my father writes in America Under Attack. “But we must understand that this isn’t simply the result of ineptitude on the part of this administration, or naivety about how the world really works. We are seeing the aftereffects of a calculated, aggressive, satanic attack aimed at weakening and ultimately destroying the nations of Israel, starting with the world’s most powerful nation!”

America is under attack. Saving it would take more than just logical thinking, smarter strategy or even a surge in courage. It would take literal divine intervention.

Request your free copies of America Under Attack and Great Again.