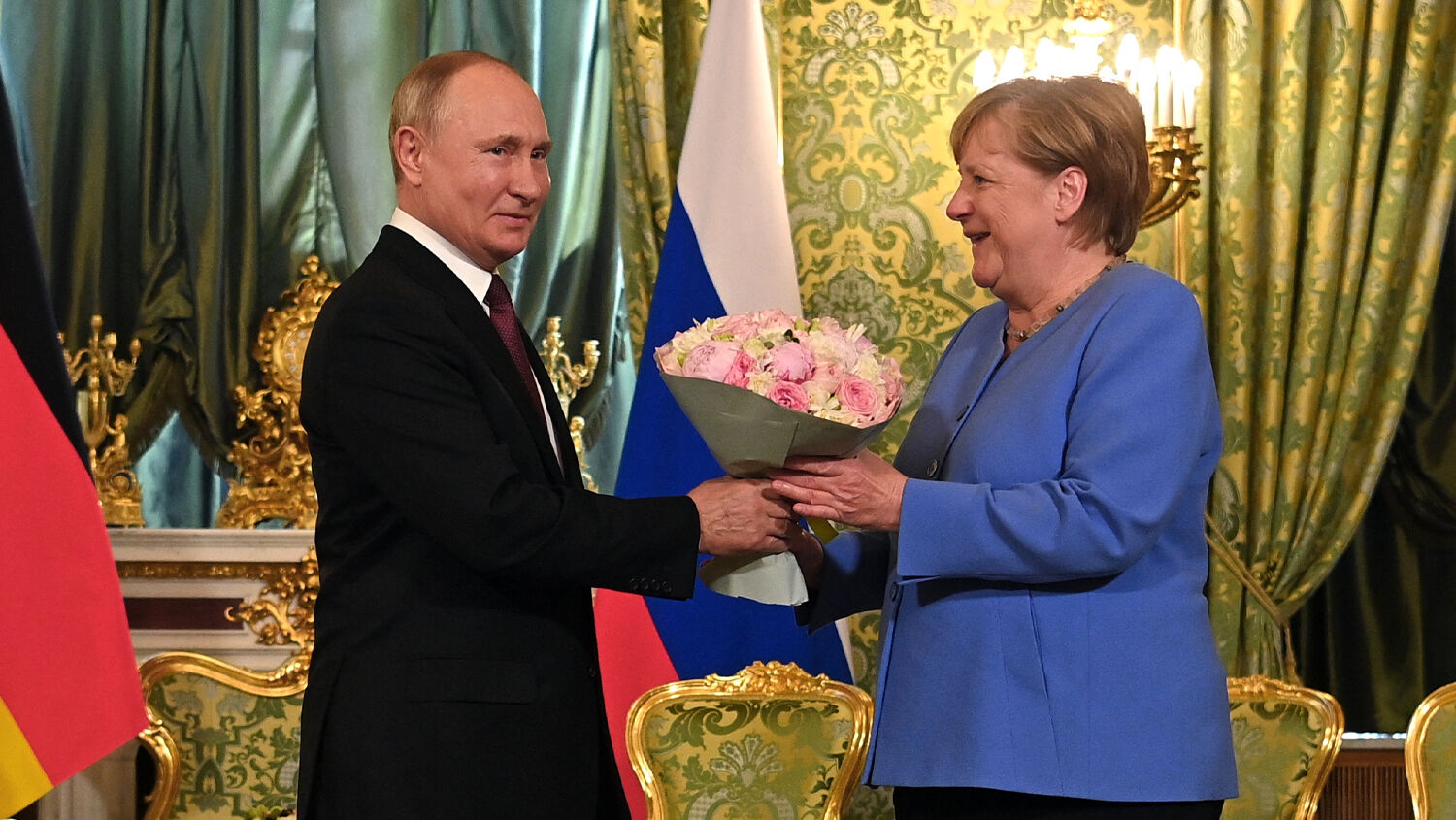 Who do you call in a crisis? For British Prime Minister Boris Johnson, the answer is the United States president. After Kabul fell, he spent 36 hours trying to contact the White House.

The meeting took place on August 20; more than just the timing was symbolic.

Putin rolled out the red carpet, hosting Ms. Merkel in the Hall of the Order of St. Alexander Nevsky—one of the most opulent rooms in the Grand Palace of the Kremlin, just outside the throne room. It was the first time any foreign leader had been hosted there. In the venue choice alone, Putin was sending a message, or maybe an invitation: Germany and Russia can have a special relationship.

Even more interesting, the EU Observer reported that the two came to a deal over Afghanistan: Russia would help Germany in return for Germany stabbing Ukraine in the back.

It reported that a “Ukrainian government source” said that “in Moscow, Putin convinced Merkel of Russian influence with the Taliban, including when it comes to dynamics that will determine how large the flow of migrants is from Afghanistan to Europe, especially Germany.”

“Ukraine and its territorial integrity are being used as a bargaining chip by Germany and Europe in their relations with the Kremlin,” the source said.

The source claims to be able to prove what he said, but didn’t hand it over, citing the need to protect his sources. But the EU Observer is a reputable outlet. It would be unlikely to publish the story unless the individual giving them the information had some credibility.

It also pointed out some compelling circumstantial evidence.

Ukraine had been planning to host an important event with various European foreign ministers, August 23 to 24, called the “Crimea Platform.” It was supposed to be a show of support for Ukraine and opposition to Russia. German Foreign Minister Heiko Maas was scheduled to attend.

“Putin demanded of Merkel the withdrawal of minister Maas from the Crimea Platform and she abided by his wishes,” said the EU Observer’s source. Maas canceled shortly after Merkel’s meeting with Putin; his place was taken by a more junior minister. Shortly afterward, the French and Italian foreign ministers followed Germany’s lead and also canceled. An event that was meant to show Europe’s support for Ukraine over Russia ended up sending the opposite message.

It’s also just the latest event in a long-standing pattern. In 2018, when U.S. President Donald Trump upset Germany by pulling out of the Iran deal, Merkel immediately booked a trip to Russia. And their Nord Stream 2 pipeline is a major strategic project for the two of them.

Here at the Trumpet we’ve speculated before about behind-the-scenes Russian and German dealings.

In our November-December 2008 Trumpet, editor in chief Gerald Flurry wrote: “[D]id you know that Germany and Russia have probably already dealt with their most urgent differences? … I believe that Germany’s leaders may have already agreed to a deal with Russia, a modern Hitler-Stalin pact where Germany and Russia divide countries and assets between themselves. This agreement would allow each to turn its sights on other targets. Any such deal that may have been struck between Germany and Russia is a precursor to war!”

Germany’s backroom deals with Russia have long been a concern to American strategists. Even during the Cold War days, they knew Germany had the option to switch allegiances and join Russia to oppose American dominance. Writing during the Cold War, international relations theorist Hans Morgenthau warned that Europe, “ambivalent toward the United States, whose support they need but resent,” could switch sides. If Germany were to do this it “would signify a drastic change in the distribution of world power.” Germany is a developed nation, with an export-focused economy. “Once the political, military, and economic ties among the Western European nations and between them and the United States were loosened, the Soviet Union could offer a profitable alternative,” wrote Morgenthau.

These kind of concerns have not gone away. Tim Marshall notes in his book Prisoners of Geography: “Through the EU and nato Germany is anchored in Western Europe, but in stormy weather anchors can slip, and Berlin is geographically situated to shift the focus of its attention east if required and forge much closer ties with Moscow.”

There’s plenty of historic precedent for such a shift. At the end of the 18th century, Germany, Austria and Russia divided Poland between themselves. More famously, Adolf Hitler and Joseph Stalin did the same thing 150 years later.

As Mr. Flurry has explained, there are plenty of prophetic reasons to expect history to repeat itself. He wrote in the September 2018 Trumpet:

The biblical book of Jeremiah is full of prophecy that is focused on the end time. You can see this plainly in Jeremiah 30. Historically, Jeremiah gave his warning message directly to the nation of Judah only. Yet so many of the prophecies in his book are directed to Israel, which was already in captivity at the time. That is because these prophecies were aimed mainly at the modern descendants of Israel, which, we can prove to you, are America and Britain today. …

Jeremiah 1:13 records God showing the prophet a vision of “a seething pot; and the face thereof is toward the north.” This symbolic language is describing modern Germany. Beneath the surface, that nation is full of simmering dissatisfaction with the current world order. Germans are angry at the U.S., and especially furious with President Trump. The imperialistic ambition that prompted Germany to start both world wars is alive and well. It is “seething”!

Never before in recent history has Germany been so “seething”—and never with better reason. Germans are angry about what happened in Afghanistan, and many other grievances, real or imagined. Mr. Flurry continued:

America, Britain, the Jewish nation (biblical “Judah”) and others should be alarmed by what is happening in Europe. Cooperation between Germany and Russia is setting the scene for a huge “seething pot” to spill over onto these nations! This boiling cauldron will scald everybody in America and Britain! This is prophesied to be the worst suffering ever known to man! And it will occur by God’s hand because of His extreme wrath over the sins of these peoples.

Do you really see what is happening in Europe? Do you see the stage being set for a world war like never before? Do you understand it?

God spells it out for us, and we can see events lining up with His prophecies. And anyone who sees it—and heeds the warning and obeys God—can be protected and lead a happy, stable and fulfilled life!

America’s withdrawal in Afghanistan is a geopolitical thunderclap. Its echoes will reverberate around all parts of the world. We’re devoting most of our upcoming Trumpet issue to this subject.

All of the changes brought in by that fall tie in with the prophetic picture we’ve spent decades painting. Study Bible prophecy and you see that the disturbing events being broadcast daily are part of a larger plan with a glorious ending.

To learn more about the Russo-German relationship and how it fits in with that plan, read Mr. Flurry’s article “Germany and Russia’s Secret War Against America.”