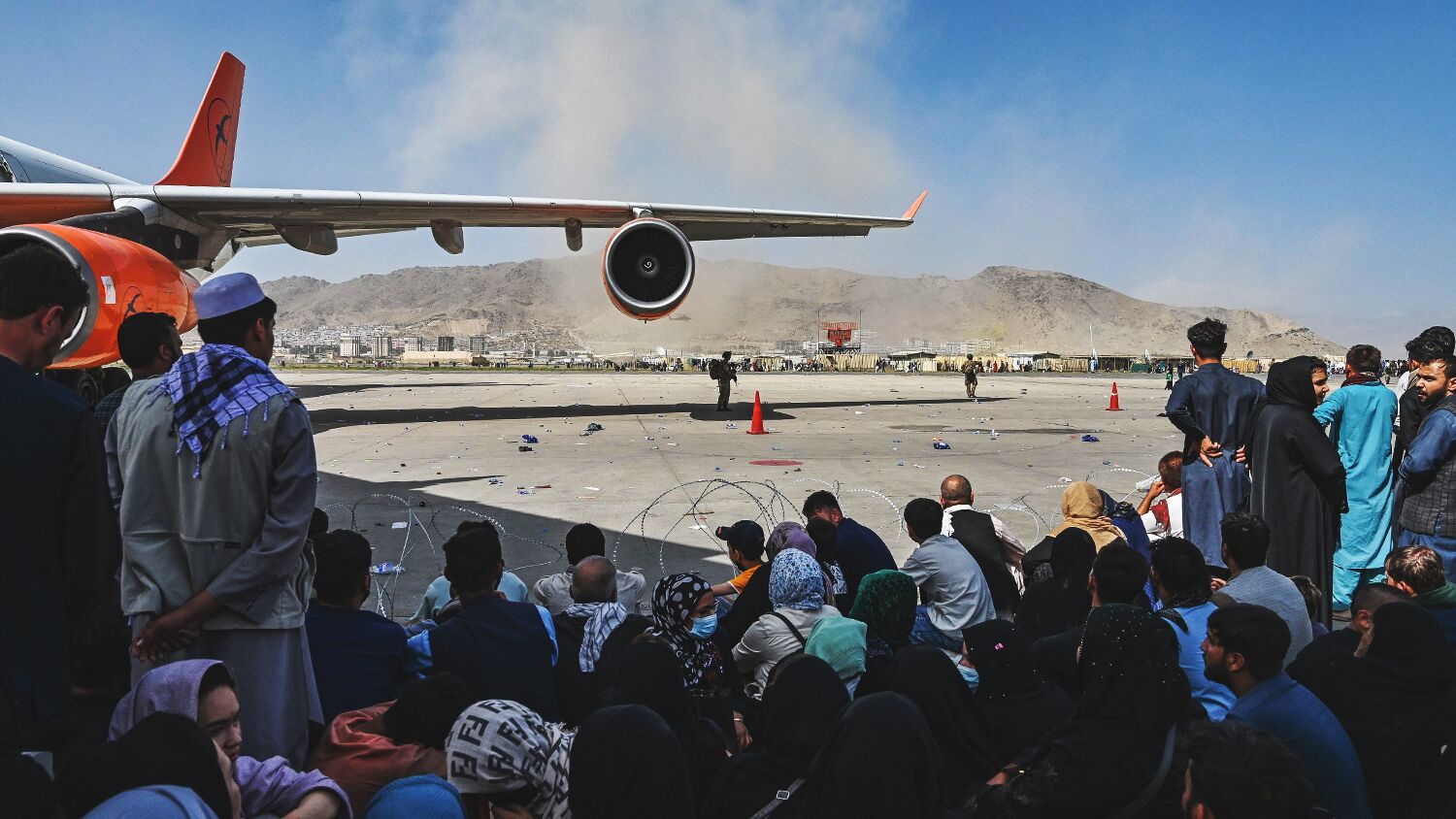 The Biden administration’s military withdrawal from Afghanistan is more sinister than you think.

Thousands of Americans have been reduced to only one hope right now: the Hamid Karzai International Airport in Kabul, Afghanistan. The United States government estimates that up to 15,000 Americans are still in the country that the U.S. military has vacated and the Taliban has completely overrun. Now the remaining staff at the U.S. Embassy in Kabul have warned American citizens, Stay away from the airport.

It seems Americans in Afghanistan have been told by their own government—the government that inexplicably pulled out its military and left them stranded—that their last hope might be fading.

You would never know this if you get your news from Joe Biden. You would think that Americans are freely traveling past the Taliban machine-gun checkpoints to the safety of American and allied soldiers at the airport gates. A day before the embassy made that announcement, a reporter asked Biden whether he would send U.S. troops into Kabul to evacuate Americans who haven’t been able to get to the airport safely. Biden’s response? “We have no indication that they haven’t been able to get—in Kabul—through [to] the airport. We’ve made an agreement with the—with the Taliban. … It’s in their interest for them to go through.”

Yet just a couple days before that, Biden said the silent part out loud and admitted that the withdrawal is chaotic and that he had always anticipated it would be. When a reporter asked him whether this exit could have been handled better, he said, “The idea that somehow there’s a way to have gotten out without chaos ensuing, I don’t know how that happens.”

America’s retreat from Afghanistan is indeed chaotic. The part that hasn’t yet been admitted out loud is that it is chaotic by design.

Ryan Crocker, a former ambassador to Afghanistan, said, “I’m left with some grave questions in my mind about Biden’s ability to lead our nation as commander in chief, to have read this so wrong or, even worse, to have understood what was likely to happen and not care.”

But it’s even worse than that.

In a recent interview, former war correspondent Lara Logan said the Biden administration wants you to believe “that Afghanistan is complicated,” but, in reality, “the United States wants this outcome.” Those who are pulling strings, she argues, “could do anything they want to change this. And they’re not.”

Logan is correct. The United States is the most powerful nation on Earth. It has been in Afghanistan for 20 years. It has built some of the largest military bases in the world in that country. But suddenly, this great army has rapidly retreated in partial disarray because a group of nomadic tribesmen says it must get out. As Joe Biden says about so many things—and should say about Afghanistan, Come on, man!

On the night of July 6, the U.S. suddenly abandoned its largest base in Afghanistan without even telling the incoming Afghan commander they were leaving. The Biden administration is deliberately trying to humiliate the U.S. and show the world that the age of American power is over!

Biden’s implementation of the Afghanistan withdrawal seems illogical, but it isn’t. In fact, it is the logical continuation of a foreign-policy objective. That policy started with the administration of Barack Obama, was stopped cold by the administration of Donald Trump—and now continues with the new administration of Barack Obama, through Joe Biden. This is the same policy that inexplicably supported the Muslim Brotherhood in Egypt and intervened to save the terrorist-sponsoring fanatics in Iran from losing their grip on the nation. This is the same policy that openly sent literal stacks of cash to Iran and worked to legitimize the regime to the point of giving it a path to obtain nuclear weapons! This is the policy that helps regimes that chant “Death to America!”

You will keep going around in circles trying to understand the Afghanistan catastrophe until you realize that it comes from this same policy. It empowers America’s enemies. It is anti-American. And it comes from America.

My father gives even more examples in America Under Attack:

America has done nothing helpful about Syria, with its witch’s brew of wmd. We really have done nothing in Libya—we won’t even go in and fight for our own ambassador and his American supporters. We won’t speak out against what’s happening in Libya. In Egypt, after that nation had peace with Israel for 30 years, we helped kick Hosni Mubarak off his throne, and we would not speak out against Mohamed Morsi essentially declaring himself pharaoh of Egypt and a bitter enemy of the Jewish nation.

Can you explain these decisions with any logic?

America had a robust military presence in Afghanistan, so no one is forcing the U.S. military to pull out of Kabul by August 31. America has plenty of time and resources to protect its citizens and conduct an orderly withdrawal from Kabul. Instead, the U.S. military rushed out early, in the middle of the night, left Bagram Air Base to the Taliban, left 5,000 terrorists in its prison to be freed by the Taliban, left billions in assets to the Taliban and left not just a stranded ambassador and his team, as Obama did in Libya, but left 15,000 Americans to the Taliban.

Days after the U.S. government inexplicably ordered its military out of Afghanistan, that same government called China for help, willing to give it concessions in Afghanistan and beyond.

Weakening America in Afghanistan, in Iraq and in relation to Iran; weakening American leadership in Europe and its special relationships with Britain and Israel: These are not consistent accidents. This is a consistent design. This is the policy of someone motivated not to save America but to blot it out. And it was prophesied in 2 Kings 14:26-27.

America Under Attack shows the ultimate motivation for the decisions coming out of the White House. Barack Obama is the president who announced that “our combat mission in Afghanistan is ending” on Dec. 28, 2014, and the true architect of the Afghanistan mess. Is he now using Joe Biden as his fall guy? It appears so. Former Obama officials are calling for members of Biden’s team to resign, but almost no one is even mentioning Barack Obama.

In his memoir Dreams From My Father, Obama describes his absentee father, Barack Hussein Obama Sr. He was a Luo tribesman from Kenya who preached an anti-colonialist perspective and viewed the United States as the invader, occupier and terrorizer of the world. By his actions, Obama has shown he too despises what America is and has been and wants to humble it, fill its government with anti-Americans, and ultimately destroy it by forcing it to become something different, something weaker, something where the biblical influence especially has been blotted out.

The U.S. military has been ordered to leave behind an estimated 2,000 armored vehicles, 45 Blackhawk helicopters, at least 600,000 rifles, 20,040 grenades, millions of rounds of ammunition, and pallets with millions of dollars in U.S. currency. The estimated value of assets is $85 billion. The Taliban controls 85 percent of the country and will control this enormous trove as well, if it doesn’t already. Why leave it behind? Why fall back in such disarray and dishonor? Why endanger Americans in Afghanistan and those working in countries around the world by displaying such weakness? Truly, we are witnessing “the aftereffects of a calculated, aggressive, satanic attack aimed at weakening and ultimately destroying the nations of Israel, starting with the world’s most powerful nation!”

Although Barack Obama has kept very quiet about the current Afghanistan fiasco, Americans are waking up to the fact that Joe Biden is not running the show. Since Biden moved into the White House, the Trumpet has been telling you to watch Barack Obama. When you understand Obama’s real dream for America, the events of the past seven months start to make sense: America is under attack from within.

In the February issue of the Trumpet, my father wrote that Obama was “at the epicenter of the election crisis and the radical left’s effort to prevent Donald Trump from being reelected!” He based his analysis on Bible prophecy: 2 Kings 14:23-29, which describe a Satan-led movement in the end time to “blot out the name of Israel from under heaven,” as well as Daniel 8:12, which exposes an end-time Antiochus who “cast down the truth to the ground,” and Revelation 12:9, which reveals that God has cast down Satan to Earth.

Please read my father’s article “Barack Obama in Bible Prophecy.” It exposes the “mastermind behind the vast, elaborate network of lies and lawlessness aimed at destroying America.” It also shows that God will still save the nation through President Trump, an end-time type of King Jeroboam ii, so that people have one last chance to repent. But things might get a lot worse before they get better.