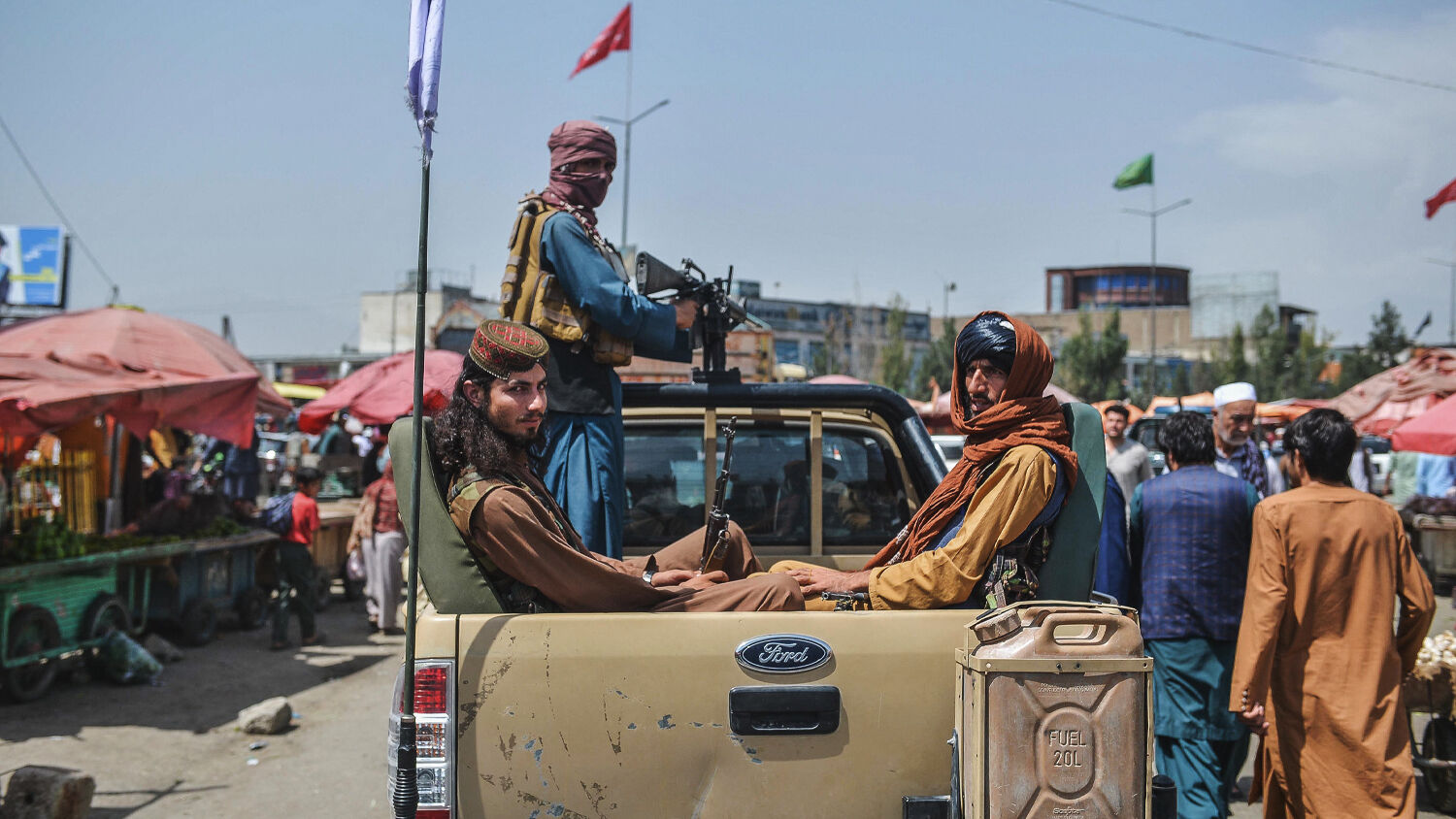 Taliban fighters on a pick-up truck move around a market area flocked with local Afghan people at the Kote Sangi area of Kabul on August 17, after Taliban seized control of the capital following the collapse of the Afghan government.
HOSHANG HASHIMI/AFP/Getty Images

The world is witnessing the disintegration not only of hope in Afghanistan but of the American empire!

What a milestone this is. We have just started our 21st academic year at Herbert W. Armstrong College. Students here are taught God’s way of life, including understanding and proclaiming Bible prophecy. And here we are, watching a shocking fulfillment of prophecy about Islamist terror unfold, just as we did 20 years ago.

My father, Trumpet editor in chief Gerald Flurry, announced in May 2001 that human civilization had entered the “last hour” prophesied by the Apostle John. (Request your free copy of The Last Hour.) About three months later, we opened the college. And almost immediately the world watched in terror, live, as 19 Islamist terrorists flew three hijacked jetliners into the World Trade Center in New York and the Pentagon, and a fourth crashed in Pennsylvania. With the rest of the world, a changed world, we watched it on television in shock. That day, 2,996 Americans were murdered. Now images are out there of the carnage being wrought by the same Islamist regime that helped perpetrate 9/11.

What a sobering sign that we really had entered the last hour. And now, 20 years into a war spawned by that atrocity—which is ending with even more atrocities—we see how bad it is getting—and how bad it’s going to get.

The 9/11 terrorist attacks shocked Americans into action. Church attendance spiked, patriotism surged, political parties temporarily set aside their differences, allies lined up, and President George W. Bush delivered a rousing speech, saying, “The terrorists are traitors to their own faith, trying, in effect, to hijack Islam itself. … Our enemy is a radical network of terrorists and every government that supports them. Our war on terror begins with al Qaeda, but it does not end there. It will not end until every terrorist group of global reach has been found, stopped and defeated.”

President Bush targeted al Qaeda, the Islamist terrorist group led by Osama bin Laden, and told Afghanistan’s Taliban regime to hand him over and expel members of his group. The Taliban refused, and on Oct. 7, 2001, United States forces invaded Afghanistan. Operation Enduring Freedom forced them from power. By Dec. 17, 2001, Time magazine ran a cover reading “The Last Days of the Taliban.”

Yet the Trumpet boldly forecast that America would lose its war in Afghanistan. We based that not on troop numbers, weapons superiority, war strategy or even morale: We based it on Bible prophecy.

We wrote that America would lose in Afghanistan because Americans had not repented from their sins, and therefore even though we had amazing military power, our pride in that power was broken. We also pointed to specific prophecies about radical Islam.

“The Trumpet has often spoken of the king of the south (Daniel 11:40) likely being a potent Middle Eastern country leading a coalition of nations united by radical Islam,” wrote managing editor Joel Hilliker in the November 2001 Trumpet issue. “It is religion that feeds the murderous aims of the terrorists—and, as we have often said, religion that will bind together this diverse, generally fractious international power. No Bible prophecy speaks expressly of a direct conflict between the U.S. and the king of the south. Prophecy instead explicitly tells of the demolition of this Mideast power by the ‘king of the north’—the European Union. Realize what this means: The U.S. won’t be the victors in this war. Europe will!”

In the 20 years since those words were written, the U.S. has spent $2.3 trillion on the War in Afghanistan. It has sacrificed more than 6,000 American soldiers and military contractors. The goal was to stop the Taliban from returning to power.

Now the Biden administration has abruptly pulled the plug.

“We did not go to Afghanistan to nation build,” Joe Biden said on July 8. “It’s the right and the responsibility of the Afghan people alone to decide their future and how they want to run their country.” He then set a September 11 deadline for troop withdrawal from Afghanistan.

Many people immediately thought of the historically shameful and embarrassing American retreat from Saigon, Vietnam, 46 years ago, and the iconic image of dozens of people crowding onto a roof to try to board a single helicopter to escape. When asked about it, Biden said, “There’s going to be no circumstance where you see people being lifted off the roof of an embassy of the United States from Afghanistan. It is not at all comparable.”

That was in July. Now it’s August. We are now seeing U.S. helicopters reportedly lifting people off of the roof of an embassy of the United States in Afghanistan.

The U.S. military left Bagram Airfield in the dead of night without even notifying the Afghan military and government that we helped set up. We left so fast that we left behind thousands of civilian vehicles and hundreds of armored vehicles. Now the Taliban has conquered the capital of Afghanistan and terrorist insurgents are posing with ammunition, Humvees and even Black Hawk helicopters.

So much for “our war on terror … will not end until every terrorist group of global reach has been found, stopped and defeated.” After 20 years of war, the only thing the U.S. has accomplished in Afghanistan is to provide the terrorists who blew up the World Trade Center with new and better weapons for future attacks and to show the world we really are as weak as we seem.

The official newspaper of the Chinese Communist Party said America’s defeat “proves that Washington is an ‘unreliable partner’ that always abandons its partners or allies to seek self-interest.” Both American allies and its enemies know that the most powerful military on Earth does not have the will to defeat a group of nomadic tribesmen. This fact will certainly embolden Iran, China, Russia and other enemies to stand against America. And why wouldn’t it? What a shameful debacle we are perpetrating.

“In the unholy armory of the enemies of the West, their single-most important weapon is their understanding that the West is no longer willing to do what it needs to do to defend itself,” wrote political commentator Melanie Phillips in “The Rout of America.” “It is no longer willing to be in it for the long haul. It no longer has the stomach for a fight. In baleful contrast, jihadis take the longest possible view. They have been waging holy war against the enemies of Islam—as they view them—since the seventh century; and for them this holy war won’t end until the whole world is under Islamic rule or the world itself ends, whichever comes first.”

Now those jihadis are taking over Afghanistan, promising their fighters “wives” (as young as 15) from among the people they conquer, and executing Afghans who helped America and its allies in an attempt to build a better nation for themselves.

What the whole world is witnessing is the moral, societal, political, financial, military disintegration of the American empire!

This disintegration has intensified dramatically in these 20 years since my father announced that humanity had entered the “last hour.” That prophecy was built on the prophecies Herbert W. Armstrong first began publishing after the Korean War. He wrote in the October 1961 Plain Truth that “unless or until the United States as a whole repents and returns to what has become a hollow slogan on its dollars: ‘In God we trust,’ the United States of America has won its last war! I said that when we failed to win in Korea! … I say it again, now that the United States government endorsed this Cuban fiasco—its president gave the ‘go ahead’—and God, the God America has deserted, gave it its most humiliating defeat! What does the Cuban debacle mean? It means, Mr. and Mrs. United States, that the handwriting is on your wall!”

These forecasts by Mr. Armstrong and my father are based on revealed Bible prophecy! The Holy Bible contains hundreds of prophecies about specific nations, most specifically the decline and fall of the United States and other modern descendants of ancient Israel. You can read these prophecies for yourself in Mr. Armstrong’s book The United States and Britain in Prophecy. The fact that the Biden administration unilaterally surrendered to the Taliban is living proof of how far America has fallen. And if the nation does not repent, the handwriting truly is on the wall!