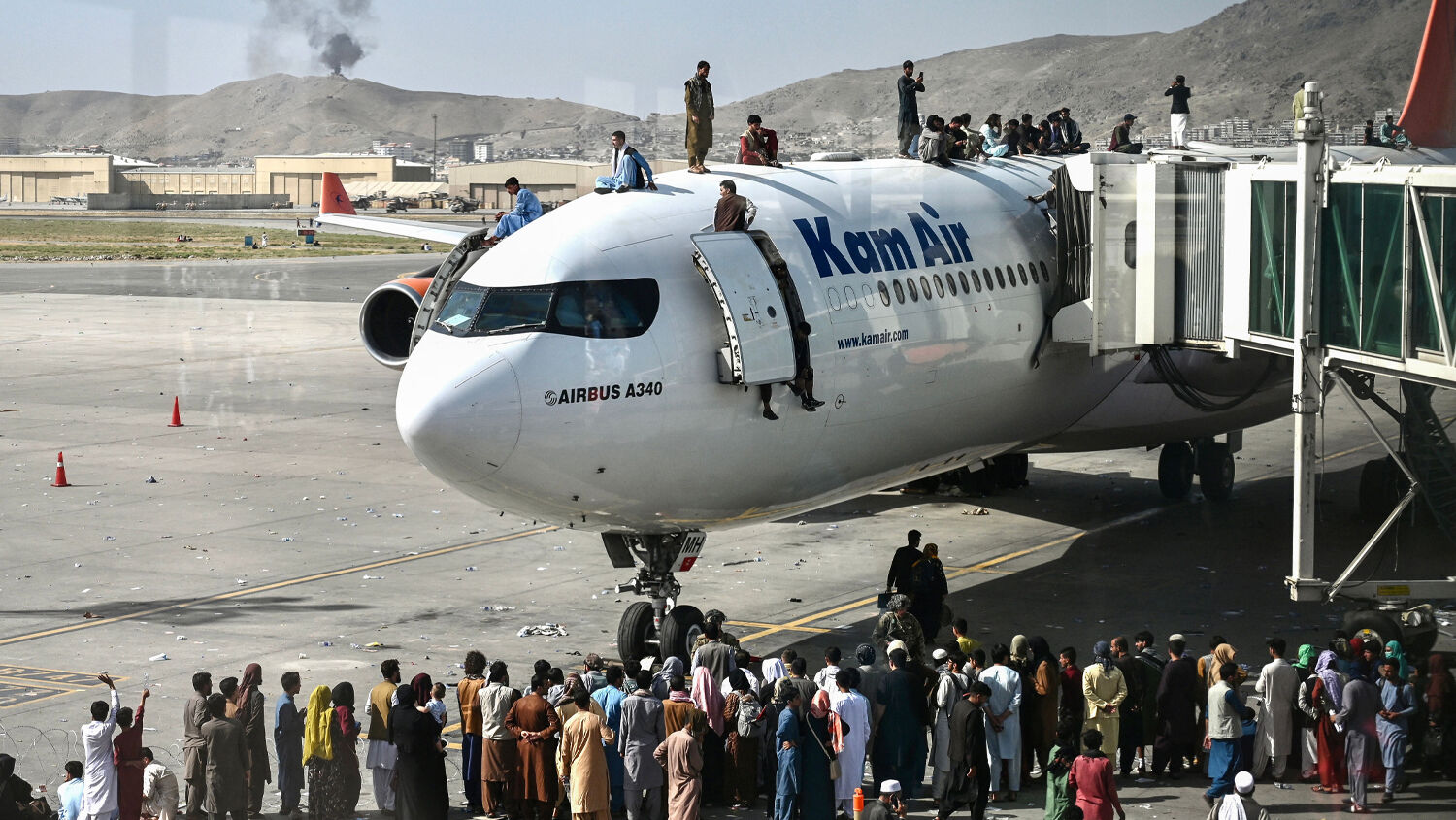 Afghan people climb atop a plane as they wait at the Kabul airport in Kabul on August 16.
WAKIL KOHSAR/AFP via Getty Images

How did a ragtag group of jihadists defeat the world’s greatest superpower?

The Afghan capital, Kabul, fell to the Taliban yesterday, as the militant group completed its takeover of the country. Afghan President Ashraf Ghani fled the city. In Ghani’s palace, a Taliban commander who claimed he spent eight years as an American prisoner in Guantanamo Bay, declared an Islamist state of Afghanistan.

The Taliban took the first city less than two weeks ago. The West holds the airport, for now, as thousands try to flee. United States troops had to fire into the air to prevent civilians stampeding the runway. Some Afghans were so desperate they clung to planes as they took off. American forces are working to evacuate over 10,000 U.S. citizens, while other nato members are sending in troops to get their staff out.

nato countries have tried to evacuate interpreters and others who helped them. But many American allies will not make it out—they will be left to the mercy of the Taliban.

nato’s withdrawal from the country has left the Taliban in possession of U.S. abandoned equipment. Taliban insurgents have posted videos, posing with Black Hawk helicopters, Humvees and ammunition.

Meanwhile a Chinook helicopter was photographed evacuating staff from the U.S. Embassy. Just over a month ago, U.S. President Joe Biden told a press conference: “There’s going to be no circumstance where you see people being lifted off the roof on a embassy … of the United States from Afghanistan. … The likelihood there’s going to be the Taliban overrunning everything and owning the whole country is highly unlikely.”

His statements now make America look even weaker. The world has united in criticism of the United States. The official newspaper of the Chinese Communist Party said America’s defeat “proves that Washington is an ‘unreliable partner’ that always abandons its partners or allies to seek self-interest.”

Pakistan’s former ambassador to the United States, Husain Haqqani, agreed. “America’s credibility as an ally is diminished,” he said.

How can it be that just a few days ago, so-called experts in the White House were claiming that Kabul would not fall anytime soon? Now there is sheer panic in the capital because, of course, the Afghan military has immediately changed its flags. … What does that say about the quality of the intelligence services and their knowledge of the country? And against this backdrop, what value are the words of Joe Biden, who recently declared that Afghanistan no longer posed a terrorist threat and that the country could therefore be left to its own devices?

Unless America acts quickly to rescue the situation, Aug. 15, 2021, could become a milestone in global politics. Just as Britain’s withdrawal from Suez in 1956 officially signaled the end of the British Empire as a world power, 2021 will likely fundamentally change the world’s view of America.

“America’s allies can now see that the U.S. is a faithless friend, the weak link in the chain of Western defenses and with untold consequences for their own security,” wrote Melanie Phillips. “With America on its knees, other enemies of the west—Iran, China, Russia—must be rubbing their hands in glee over the opportunities for evil now opening up for them as a result. … We are today not just staring at the abandonment of Afghanistan. We are staring at America’s abandonment of itself.”

The Trumpet forecast this tragic situation 20 years ago. As America entered Afghanistan in the wake of the September 11 attacks we asked: “Does America have the will to see it through? What happens when the war spreads from Afghanistan to other, less-isolated governments—when world opinion begins to turn on the U.S.? What happens if American soldiers begin to die—or if retaliatory terrorist attacks on American soil intensify? Would the unanimity of public opinion fracture? Would fear intensify and determination falter?”

The answer was already clear: “While the U.S. wants to eliminate terrorism and is becoming much more aggressive in trying to do so, its efforts will fall short. It frankly does not have the necessary will to tackle the enormity of the problem!”

Instead of going directly after the head of the terrorist snake—Iran—the U.S. resorted to “clever half-measures.”

This forecast of failure is based on promises in the Bible. Leviticus 26 spells out the blessings America would receive if they obeyed God, and the curses that would come if they did not. In verse 19, God warns, “I will break the pride of your power.” As the world clearly sees, God is breaking America’s will.

In the next verse he warns, “[Y]our strength shall be spent in vain.” The Costs of War project put the total cost of the Afghan war at around $2 trillion. Also 3,500 allied soldiers have died—2,300 were American. With state-of-the art military bases and equipment falling into the Taliban’s lap, this prophecy has been fulfilled exactly.

This is the unseen reason why a ragtag group of Islamic extremists have defeated the world’s greatest superpower: America is being cursed by God.

This unseen reason also carries great hope. A loving God is in charge. He’s correcting America and the world to turn them back to Him. To understand why and how America is receiving these curses, read our article “America Has Won Its Last War.”