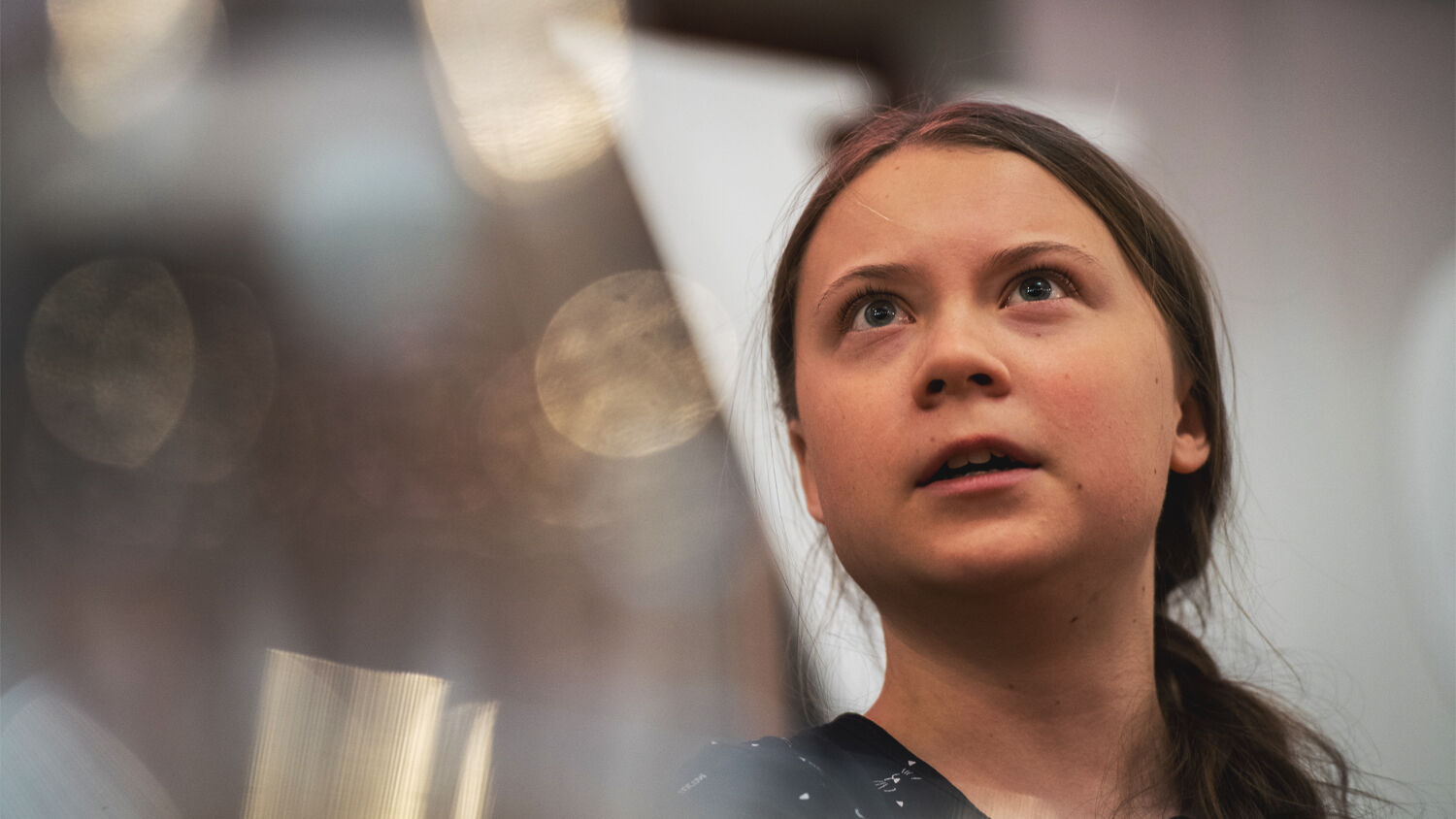 “God has raised up a prophet in Greta Thunberg in a way that no one could predict.” That’s the verdict of the former head of the Anglican Church, Rowan Williams. “She has said things no one else could have said. Thank God for her!” he continued.

His comments came at an ecumenical festival in Norway last week. There, in Scandinavia, many religious leaders have hailed her with similar language. In 2019, the head of the protestant Church of Sweden, Antje Jackelén, said, “I believe she is actually prophetic in the same way that the Old Testament prophets were persistent with their message.” A deaconess in the Uniting Church in Sweden wrote in an article for the Christian newspaper Kyrkans Tidning, “We want to claim that Sweden has a prophet who is active—right now. Her name is Greta Thunberg and she is fully comparable to the prophets of the Bible.” A local branch of the Church of Sweden even tweeted: “Announcement! Jesus of Nazareth has now appointed one of His successors, Greta Thunberg.”

“With raging wildfires, floods and pandemics, it seems like end times—and it’s our own … fault,” read the quip. The author warned that all the plagues and prophecies of the book of Revelation are about to descend on Earth.

“What if the heat of the world, the fires in the Amazon, Australia, the Arctic fires, the changing of the Gulf Stream were the incipient stages of a wholly different order?” the author asked. “The beginning phase of a wholly changed planet. Maybe the true meaning of the apocalypse as it was used in the New Testament meant a revelation, a revelation about an entirely novel geologic era of being—a wholly man-made epoch, with no need for a godhead, the Anthropocene, forged by far too many greedy, consuming humans.”

This apocalyptic language has only worsened since the Intergovernmental Panel on Climate Change unveiled its report on Monday. “If we do not halt our emissions soon, our future climate could well become some kind of hell on Earth,” said Prof. Tim Palmer at the University of Oxford (no relation to this author).

The solution? “Immediate repentance,” according to the Guardian. But not repentance toward God—instead it must come “in the form of immediate and deep emissions cuts.”

Maybe this is the inevitable result of language inflation. The polar ice cap was supposed to disappear by 2013, 2014, 2015 and 2016. We had only 50 days to save the climate in 2009, and 500 days to save it in 2014. Britain is supposed to be “Siberian” by now, due to climate change. Snow is also supposed to be so rare that British children have no idea what it is—also due to climate change. If you constantly predict catastrophe, people get used to it. So with each failed prediction, they must resort to language that gets more and more extreme.

But there is a much more serious problem here. Despite all the failed predictions, there is something wrong with the weather. Wildfires are burning around the Mediterranean. Dozens have been killed in Algeria, while scenes from Greece genuinely are apocalyptic. China’s streets have been turned to rivers, while buildings were washed away in Germany. Even Siberia is on fire.

People are right to sit up and take note. But climate “science” struggles to explain how all these varied catastrophes are caused by carbon dioxide emissions.

Science is about making a prediction and comparing it with the evidence. Climate models predicted that Germany would receive less summer rainfall due to climate change—not more. Last year’s dry summer was blamed on climate change. The Spectator noted, “If you want to try to blame last week’s floods on climate change it is first necessary to argue that the models have been wrong all along—and that actually Germany will suffer greater summer precipitation.”

Pointing to every unusual event and claiming it’s climate change is not science.

Here’s a “theory” that most scientists would scoff at, but one that fits the data much better: An all-powerful God exists, He is concerned with what man does on Earth, and He uses the weather to get man’s attention.

The Bible makes a lot of specific forecasts. It’s not just less rain or a warmer planet—but a whole variety of curses, including disease pandemics, earthquakes, fires and floods. In fact, its forecasts emphasize the variety of curses. God says in Amos 4:7, “And also I have withholden the rain from you, when there were yet three months to the harvest: and I caused it to rain upon one city, and caused it not to rain upon another city: one piece was rained upon, and the piece whereupon it rained not withered.” This is a prophecy about drought and floods hitting different places at the same time.

If we are truly being scientific, shouldn’t we accept the theory that best fits the evidence?

The church of climate change is doing great damage by ignoring the Bible and instead pushing man’s ideas of what we should and should not be doing. God says, “[T]he Lord hath his way in the whirlwind and in the storm, and the clouds are the dust of his feet” (Nahum 1:3). If a Christian leader really believes what the Bible says, how can he teach that Greta is a prophet and these weather disasters come from our climate sins, not from our much more serious moral sins?

The book of Nahum, which contains that warning, is specifically addressed to Assyria—modern-day Germany in Bible prophecy (for proof, read our reprint article “The Remarkable Identity of the German People”). Anciently, when the Prophet Jonah warned the Assyrian city of Nineveh, the Assyrians did something incredibly rare: They listened to him and repented.

The floods last month in Germany killed nearly 200 people. It was the worst natural disaster the country had seen since the North Sea floods in 1962. It got the nation’s attention. There was a real sense of a need to change. Germans knew this was not normal.

But because of the church of climate change, many are convinced only of the need to change carbon emissions. Trumpet editor in chief Gerald Flurry called this “the deadly climate change deception.” They’re completely deceived on the cause of the crisis.

There’s another terrible side effect to this approach. The Hill described the etymology of the word “apocalypse,” writing, “Apo, meaning to take away, and kalypto, meaning to cover or to hide. So really we are lifting the veil of illusion or untruth. … The Earth is forcing us to lift the veil of illusion from our eyes. Pray that humanity listens.”

That’s not what the Bible’s “apocalypse” is about.

As Mr. Flurry writes in his booklet Unveiled at Last: The Royal Book of Revelation, “[T]he word actually means an uncovering or disclosure—to enlighten or give light! Revelation should reveal light to men.”

Pointing people to the apocalypse of the Bible gives a warning, but it is also full of light and hope. Changing the apocalypse to some kind of creation of man leaves us with only a bleak future.

“What the authorities of this world are saying about climate change destroys faith!” wrote Mr. Flurry in “The Deadly Climate Change Deception.” “It destroys our hope!”

The church of climate changes covers the true cause of our weather curses. But it also hides the solutions, and the hope behind them.

“God wants to give us every blessing imaginable, but first we must turn to Him in humble obedience,” wrote Mr. Flurry. “This is the major lesson that God wants to teach us in these weather disasters. That is why it is such a dangerous deception to remove God from the equation and blame all these problems on carbon emissions causing climate change.”

Don’t allow your vision of these events to be clouded by those who preach from the church of climate change. To understand the real light of what the Bible says on this subject, read our free booklet Why ‘Natural’ Disasters?