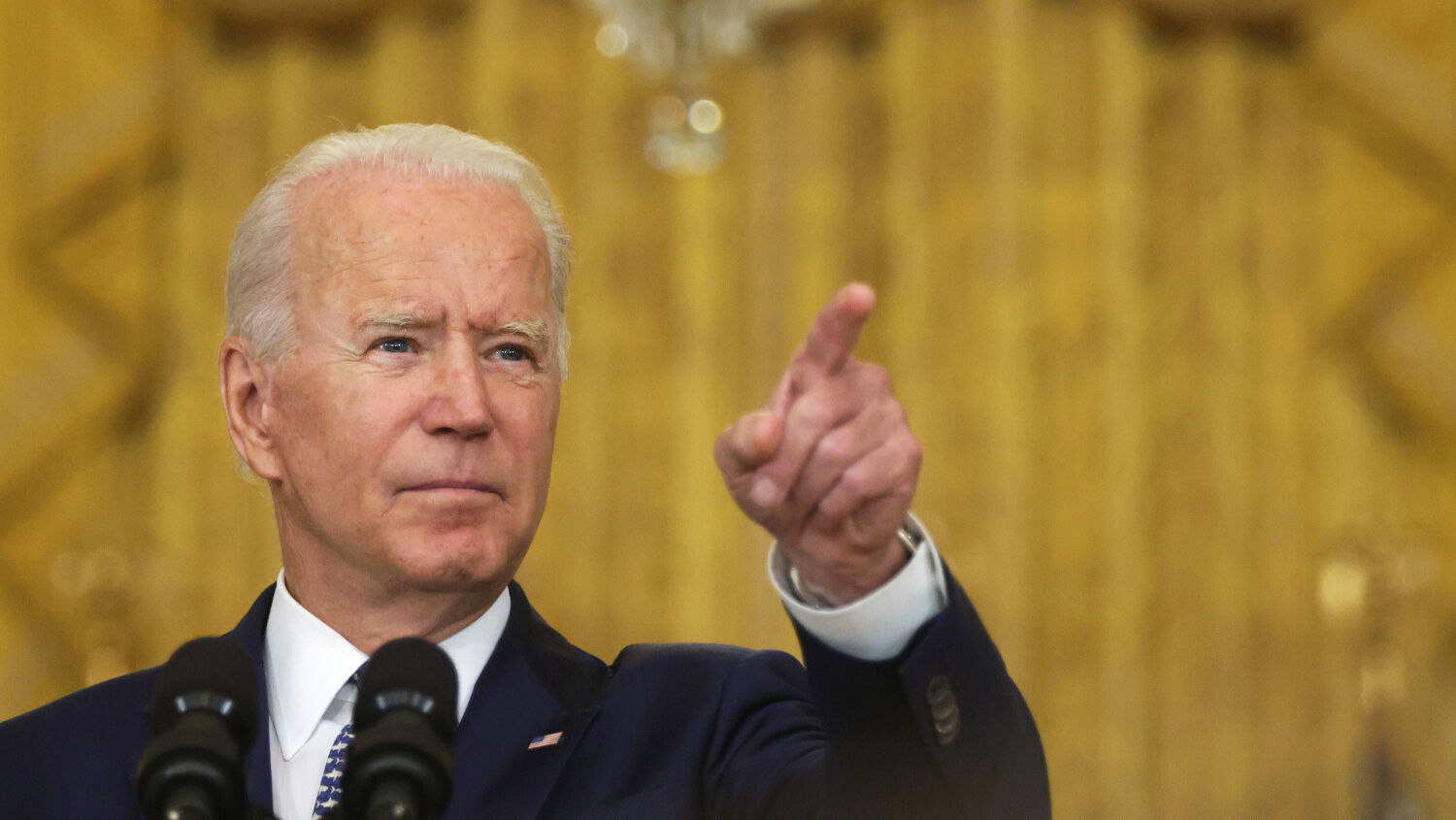 ‘Rent control appears to be the most efficient technique presently known to destroy a city—except for bombing.’

Joe Biden is now essentially confiscating property from its legal owners. On August 4, Biden’s Centers for Disease Control and Prevention extended a moratorium on evictions. If a tenant refuses to pay his rent, this decree states that the owner of the home cannot evict him, even if the owner needs that rent money to pay his own mortgage. The original eviction moratorium was imposed by Congress last year as part of a law that tried to soften some of the effects of record unemployment due to government-imposed lockdowns. Now, jobs are plentiful, so this measure is not needed. More importantly, Biden and the cdc bureaucrats have no constitutional authority to do this. So why are they forcing it through?

Biden and the radical left are consolidating their power. They are weakening and bankrupting middle-class Americans, worsening the divisions in our society, and moving us away from the rule of law and toward the rule of whoever grabs power.

The original eviction moratorium was a violation of private property rights and therefore unconstitutional. But at least it had a veneer of legitimacy since it was implemented not by executive branch bureaucracy but through a law passed by the representatives of the American people in Congress. It was contested all the way to the Supreme Court, but Justice Brett Kavanaugh weakly sided with Chief Justice John Roberts and the three other liberals to uphold it. He tried to have it both ways by saying that he would not uphold the moratorium again after it expired on July 31 unless it was in a law passed by Congress. Now the court gets to watch Biden and those behind him as they grind away the rule of law even more.

The radical leftists are replacing the rule of law with the rule of their will! Anthony Fauci is the science, and radical Democrats are the law.

Even the leftist Washington Post admits this eviction moratorium is illegal. Biden knows that he and the federal bureaucracy are grabbing powers that the Constitution does not grant them. He admitted as much at a press conference, saying, “The bulk of the constitutional scholarship says that it’s not likely to pass constitutional muster. But there are several key scholars who think that it may and it’s worth the effort. … At a minimum, by the time it gets litigated, it will probably give some additional time while we’re getting that $45 billion out to people who are, in fact, behind in the rent and don’t have the money.”

What a statement! This is the man in the White House admitting publicly that he governs in ways that likely violate the Constitution, but he pushes ahead as long as he can get away with it before the courts can make an official ruling.

You now live in an America where a president of questionable legitimacy has decreed a modern-day Quartering Act forcing you to pay the bills for other people who refuse to pay—even if it bankrupts you. If the radicals can violate this constitutional principle, what principle is off limits? When you can’t appeal to the highest law in the land, you are left to appeal to the will of tyrants.

You have to ask yourself: What is coming next? Will this administration suddenly get its fill of destroying the Constitution and the rule of law and then start building it back up again? Will it suddenly start giving up the power it has seized and return it to the people? Will it suddenly respect the rights of individuals, like the small-scale landlords it is bankrupting? Or does it have its sights set on the last remaining constitutional principles still intact?

You can see the answer in the radical-left progressives in the Democratic Party who pushed for this specific moratorium extension. Mississippi Representative Cori Bush, a member of the so-called “squad” of Rep. Alexandria Ocasio-Cortez, staged a sit-in on the U.S. Capitol steps to pressure Biden into extending the moratorium. This stunt and other pressure appear to have worked.

Biden, a 48-year career politician and former vice president, learned next-level constitutional violation from his boss, Barack Hussein Obama. As president, Barack Obama regularly violated the Constitution. He regularly seized power that our law did not give him. He abused his power in the Fast and Furious scandal (when the government intentionally smuggled firearms to drug cartels). He decreed that he would not enforce parts of immigration law he did not like. He forced through Obamacare. He conducted massive and illegal surveillance. He appointed federal bureaucrats without approval from Congress. He sent the military into Libya without consulting Congress. His Department of Justice introduced a rationale for killing United States citizens with drone strikes. He violated Americans’ free speech, freedom of the press, due process and other constitutional rights.

When President Obama wanted to do something unconstitutional, he just did it. He did not worry about the consequences. He did so many blatantly unconstitutional things during his presidency that the Supreme Court—even with four leftist justices—ruled against his administration unanimously 44 times, far more than any president in history. Yet he kept pushing. Now he keeps pushing, through his former vice president.

Practically every constitutional scholar says the government cannot force people to let tenants live on their land for free, but Representative Bush slept in front of the Capitol with a bag of Doritos like a homeless person for four nights, so Biden instructed the cdc to extend the moratorium. This is all pure theater to convince Americans to surrender their private property rights.

It is shocking how brazen the Biden administration has become. Not long ago, Democrats still tried to find some loophole to justify their unconstitutional power grabs. But with this extended eviction moratorium, they are openly declaring it is unconstitutional and they don’t care.

“The eviction moratorium is one of the most important stories of the covid-19 lockdowns but also one of the least covered, partly because its effects are so diffuse and partly because the left doesn’t want to draw undue attention to its evisceration of property rights under the guise of public health,” wrote John Daniel Davidson at the Federalist. “But the way all this has gone down illustrates a deeply disturbing reality about the Democrats running the pandemic response in Washington: They’re lawless, and as the pandemic drags on, they’re becoming bolder about it. … It should be clear by now that whatever else is constraining the Biden administration and Democrats in Congress, it isn’t the law. The law, for now, is whatever they say it is.”

As long as the eviction moratorium is in place, the government controls who gets to live on private property. Representative Bush claims the government must do this to help the poor, but this will only make the poor more numerous by crushing hundreds of thousands or millions of middle-class landlords. The Brookings Institution estimates that “40 percent of residential property units are owned by individual investor landlords. Among those owning residential investment property, roughly a third are from low- to moderate-income households; property income constitutes up to 20 percent of their total household income.” The bigger landlords in America, like Bill Gates, will be able to weather this moratorium and perhaps even profit from the losses of small “mom and pop” landlords.

Swedish economist Assar Lindbeck once wrote, “In many cases rent control appears to be the most efficient technique presently known to destroy a city—except for bombing.” When you let people live someplace for below market price, new home construction stops, housing shortages start, and societal problems worsen.

The Democrats pride themselves on being the party of the poor, so they are now pulling out all the stops to obliterate middle-class people, who don’t need them as much, and multiply the number of poor people. America is coming to resemble a Communist dictatorship, where a small clique of wealthy central planners makes decisions for the impoverished masses dependent on their will.

“Actually, the Communist Party is not a mere political party in the sense that Americans think of the term,” the late Plain Truth editor in chief Hebert W. Armstrong wrote in 1962. “It is a ruthless, totalitarian dictatorship. It is run with absolute power by a few men at the top, all of whom are completely subservient to one man who is a dictator-absolute! This one-man dictatorship is supposed to be necessary because there are many different interpretations of the Marxist philosophy. Therefore, to prevent division, they must have a supreme interpreter.”

Barack Obama was a self-avowed Marxist in college. His administration tried to govern America like a Communist dictatorship as much as possible. Now his vice president is continuing his work by trying to crush middle-class landowners out of existence and create a huge lower class completely dependent on the government.

This type of bitter affliction on America is actually prophesied in your Bible. 2 Kings 14:26-27 say, “For the Lord saw the affliction of Israel, that it was very bitter: for there was not any shut up, nor any left, nor any helper for Israel. And the Lord said not that he would blot out the name of Israel from under heaven: but he saved them by the hand of Jeroboam the son of Joash.” Anyone who knows anything about history, politics, or economics can see that America is in bitter affliction today, but to see how these verses are actually a prophecy that God will save America—temporarily—by the hand of a Jeroboam-like figure, please read “What Will Happen After Trump Regains Power,” by Trumpet editor in chief Gerald Flurry.