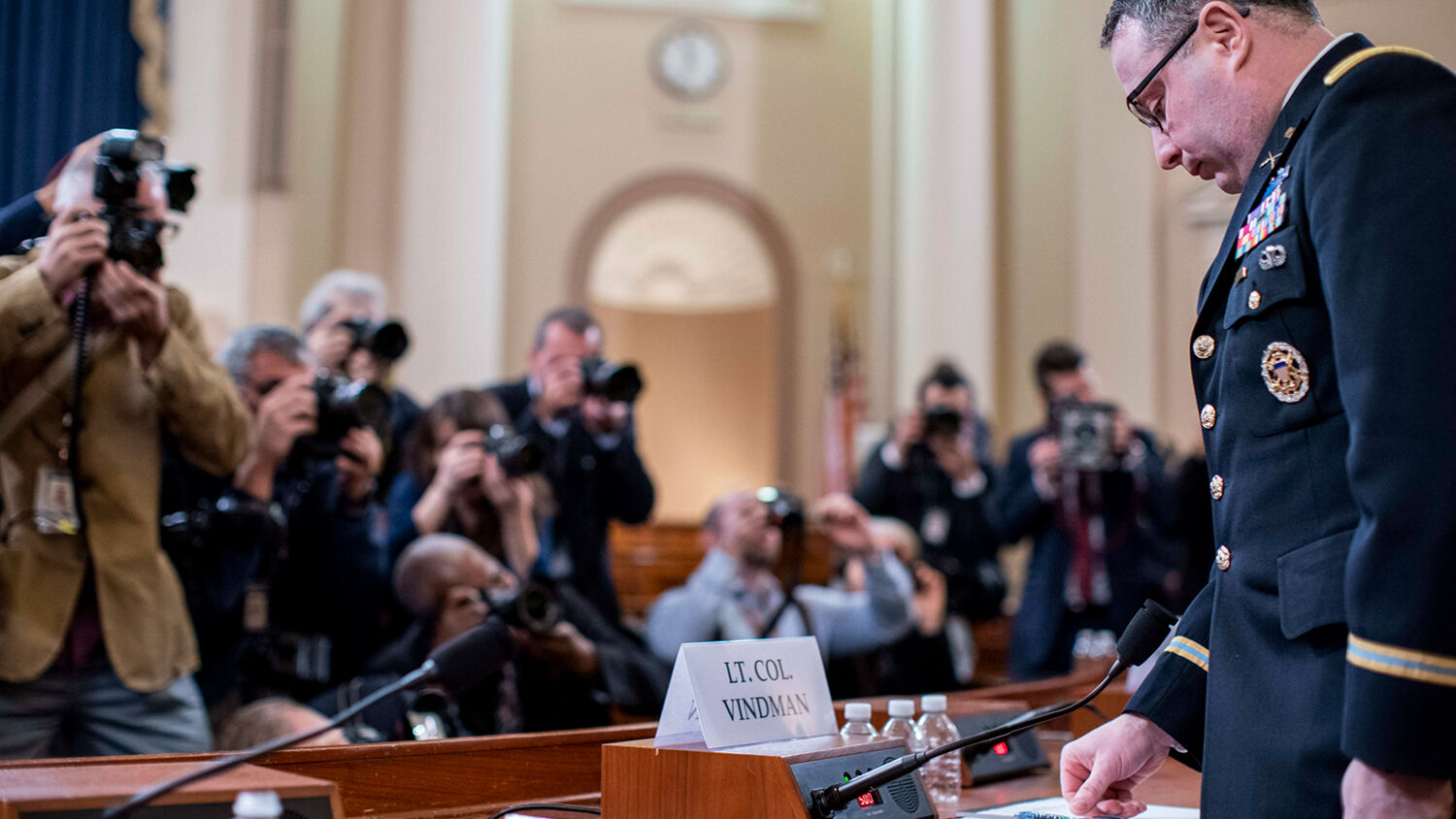 Lt. Col. Alexander Vindman has a new book out about the infamous phone call that saw President Donald Trump impeached. The Atlantic has an article adapted from the crucial section.

There’s a lot I could say about it. But the thing that stood out the most was Vindman’s absolute confidence in himself as the expert. He was the Ukraine guy. He’d studied the country. He’d been trained in foreign policy. He knew the way to handle it.

And so he told the president what to do. Most of his frustration came from the fact that President Trump didn’t do it.

“I knew the president had clear and straightforward talking points—I’d written them,” he writes. If President Trump followed his instructions all would be good. But as soon as the phone call started, Vindman “knew right away that everything was going wrong.”

“The president wasn’t using my talking points at all,” writes Vindman. “As the conversation progressed, my worst fears about the call kept being reconfirmed. Off on a tangent of his own, the president was aggravating a potentially explosive foreign-policy situation.”

To Vindman, he alone knew the best way to deal with Ukraine. Any alternative was not the best. Why would a president do something other than the best for America? It must be treason.

Of course, many people were looking for any possible excuse to attack President Trump. But his refusal to leave foreign policy, and the government in general, to the “experts” was a good part of the reason many hated him.

Here in the United Kingdom, a very different controversial figure demonstrates a similar belief in the experts. Until November last year, Dominic Cummings, the prime minister’s chief adviser, was one of the most powerful men in the country.

Cummings sees that the world is a precarious place. He explained to the Spectator that he’s “pessimistic about the system.”

“The system is prone to disaster,” he said. “I mean we got lucky with [Adolf] Hitler in all sorts of ways, and lucky that we didn’t have nuclear war later, and people tend to think that’s all in the past, but I think we’re going to keep having horrific problems, and there’s no one in politics or the civil service equipped to deal with them.”

He’s right. But his solution is to bring in smarter people. He’s looking for a different set of experts than those like Vindman. Cummings isn’t a believer in the conventional wisdom or the status quo. Instead, he wants the outsiders and mavericks who are smart enough to see the solutions everyone else misses. But can maverick experts save us?

Both of these worldviews miss a critical truth. The fact is, the experts can’t save us—for a very important reason.

More expertise and training doesn’t lead to consistently better results. And it’s not just me saying that. In his 2018 article “America’s IR Schools Are Broken,” Stephen M. Walt, professor of international relations at Harvard University, described the growth of foreign policy education at America’s best universities over the last 50 years.

Walt concluded that “the vast expansion of professional expertise does not seem to translate reliably into more sensible and effective policies.”

I teach International Relations at Herbert W. Armstrong College. We use a textbook first published in 1948. With all the study of the subject that has gone on over the last 70 years, surely there would be a better, more modern book out there. Instead, modern textbooks are generally worse.

Imagine if man had made zero progress in flying to the moon since 1948, or if we knew no more about the universe now than we did in 1948, or if an astronomy textbook of that era were better than one today: We would acknowledge that something was seriously wrong with our expertise in that field. Surely we should do the same for experts in foreign policy and governance.

Of course, study and knowledge aren’t irrelevant. If you think Ukraine is a small island in the Pacific Ocean, you’re unlikely to be able to give good policy advice. But time and again, Donald Trump ignored the experts and brought success when they forecast disaster. He moved the U.S. Embassy to Jerusalem, took care of Iranian Gen. Qassem Suleimani, and signed the Abraham Accords—all while the experts predicted his actions would lead to World War iii.

I’m sure the so-called “experts” did indeed have a more detailed knowledge of the complex situations. Yet President Trump was right while they were wrong. Why didn’t all that detailed understanding help them?

Herbert W. Armstrong often talked about this failure in man’s civilization. He talked about an “astonishing paradox, a world of human minds that can send astronauts to the moon and back, produce the marvels of science and technology, transplant human hearts—yet cannot solve simple human problems of family life and group relationships, or peace between nations” (Mystery of the Ages).

The Bible gives a clear and simple reason for this paradox. 1 Corinthians 2:11 asks, “For what man knoweth the things of a man, save the spirit of man which is in him?” This verse tells us that every human being has a spirit within him. This spirit allows him to know “the things of a man.” Physically, a man’s brain looks very similar to an animal’s. But it is this spirit that makes all the difference and allows man to understand art, literature, music, etc.

“The system of modern education has become entirely materialistic,” wrote Mr. Armstrong. “The modern scientific concept denies the invisible and the spiritual as having existence. Yet all our seemingly unsolvable problems and the evils in this world are spiritual in nature” (ibid).

It doesn’t matter how much of this materialistic education one may imbibe, it brings him no closer to solving these evils. Someone like President Trump may not have the years of education into Ukrainian politics possessed by someone like Vindman, but his view of the world is closer to some fundamental biblical truths—and so he achieves better results.

As Trumpet executive editor Stephen Flurry explained in the cover article for our latest issue, the exalted education of today’s medical experts leaves them prone to arrogance and catastrophic mistakes. This problem pervades all levels of government.

The fact is, to bring peace to families, societies and the world takes more than material knowledge; it takes spiritual understanding, which comes from God.

“God is teaching men even as they rebel,” writes Trumpet editor in chief Gerald Flurry in his free booklet Daniel Unlocks Revelation. “They are learning that man cannot rule himself—only God can bring men peace, prosperity, happiness and joy.” God rules, and man cannot. Mr. Flurry says that is “the greatest lesson mankind could possibly learn.”

Today’s world gives us a clear demonstration of why looking to experts cannot save us. Some are waking up to that fact. But few are looking to God.

If you want to understand God’s solution, our free book Mystery of the Ages, by Herbert W. Armstrong, is a great place to start.

“I learned that the Bible is like a jigsaw puzzle—thousands of pieces that need putting together—and the pieces will fit together in only one way,” wrote Mr. Armstrong. “Then the picture becomes crystal clear to the one willing to believe what God our Creator says. This present book [Mystery of the Ages] merely puts the many pieces of the great puzzle together so they can be clearly understood.”

Mystery of the Ages is the best source for understanding the spiritual dimension needed to fix this world and to fix the individual lives of everyone living in it. As usual, you can order your own free copy, or read it online.