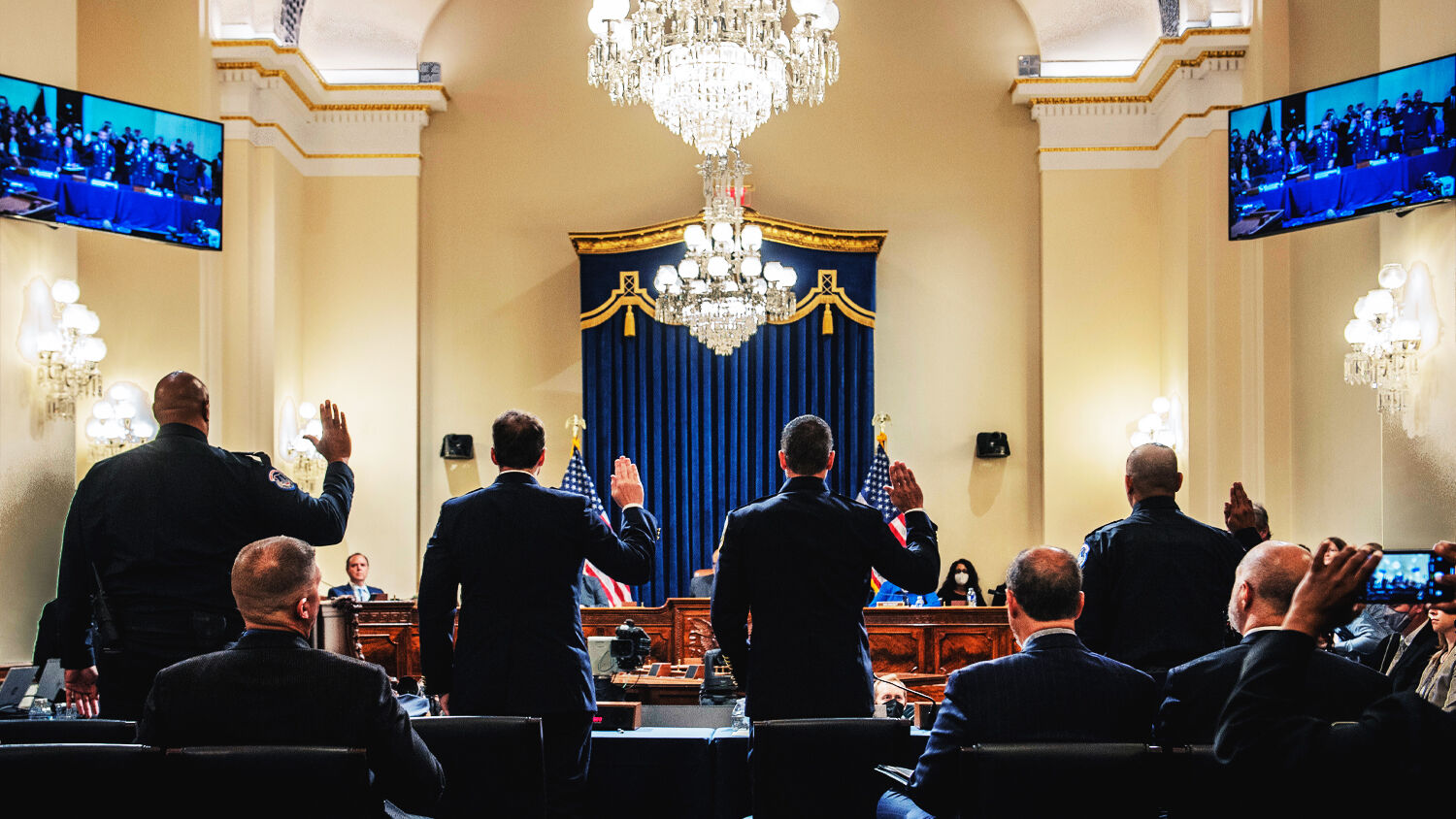 Some investigations are for exposing crime; some are for covering up crimes.

The January 6 committee hearing last week made for good theater: the tears, the sniffles, the tissues, the pregnant pauses. But those directing the theatrics are not interested in finding the truth about the protest.

For an idea of how radical these prescreened officers were, Dunn defended the Black Lives Matter riots in Kenosha, Wisconsin, last year, saying: “Why is murder an appropriate response to property damage, but property damage isn’t an appropriate response to murder?” Those riots killed two people and caused $50 million in property damage, according to the Kenosha Area Business Alliance. But this U.S. Capitol Police officer had nothing negative to say about the violence because it was perpetrated by radical leftists.

Yet during Dunn’s testimony about the January 6 protests, he said he is “still hurting from what happened that day” and that “we can never again allow our democracy to be put in peril as it was on January 6.” The other officers made even more alarmist statements. Gonell likened the violence to “a medieval battlefield” and tearfully recounted how he and his fellow officers “were punched, pushed, kicked, shoved, sprayed with chemical irritants, and even blinded with eye-damaging lasers by a violent mob who apparently saw us law enforcement officers, dedicated to ironically protecting them as U.S. citizens, as an impediment in their attempted insurrection.” Fanone said he was “grabbed, beaten, tased, all while being called a traitor to my country.” Hodges said the protesters were “terrorists” who told him: “You will die on your knees!”

All this made for award-worthy theater, yet there is no video or medical evidence showing that any of these officers actually suffered the physical and verbal abuse they described. It reminds you of Rep. Alexandria Ocasio-Cortez, who said she feared being raped and killed during the Capitol protests when she was not even in the building that day.

Dunn also perpetuated the claim that Officer Brian Sicknick died from injuries he received during the Capitol protests when it has been known for months that Sicknick died from a stroke. Why would he say something both he and his audience know is a lie? Because the purpose of this sham hearing was to blame the Capitol breach on President Donald Trump. That is why Dunn likened the protesters to hit men and President Trump to a crime boss. It is also why Gonell said that the mob “was not Antifa. It was not Black Lives Matter. It was not the [Federal Bureau of Investigation]. It was [Trump’s] supporters. He sent them over to the Capitol that day.”

Despite the myriad of lies told during the January 6 committee hearing last week, we have obvious video and social media evidence of President Trump’s role.

We have video evidence from the night before of a man wearing a red Trump hat inciting the people around him to storm the Capitol the next day. Yet the crowd of Trump supporters around him yells, “No!” and begins chanting, “Fed, fed, fed.” They immediately suspected someone trying to incite lawlessness of being an informant or agent of the federal government. This suspected informant’s name is Ray Epps, and he has not been arrested like so many other agitators have been. Maybe it has something to do with a man he was photographed with that same night: Antifa terrorist John Sullivan. Sullivan infiltrated the protest posing as a Trump supporter and entered the Capitol. He was near protester Ashli Babbit when she was fatally shot by law enforcement.

We have video of President Trump’s entire speech at the Save America Rally. He told the crowd that they had to oppose the lawless election with a strong, lawful protest. He told them he knew they would walk to the Capitol to “peacefully and patriotically make your voices heard.” Less than 90 minutes after he finished his speech and less than 30 minutes after the first unauthorized people entered the Capitol, he tweeted, “Please support our Capitol Police and Law Enforcement. They are truly on the side of our Country. Stay peaceful!” And 35 minutes after that he tweeted, “I am asking everyone at the U.S. Capitol to remain peaceful. No violence! Remember, WE are the party of Law & Order—respect the Law and our great men and women in Blue. Thank you!” Barely 60 minutes later, he recorded and posted a video stating, “[Y]ou have to go home now. We have to have peace. We have to have law and order. We have to respect our great people in law and order. We don’t want anybody hurt.”

Dishonoring our Capitol is something our forefathers would oppose. Scuffling with police is foolish, counterproductive and illegal. Lawlessness, especially lawless violence, is wrong. A good government should respond—not in excess or with cruel and unusual punishment, but appropriately. This is true whether the offender is a misguided Trump supporter—or whether he is an infiltrator belonging to a radical-leftist faction or a radical-leftist government agency. As President Trump said in that same video, “[W]e can’t play into the hands of these people.”

“These people” likely included fbi agents and informants. Gonell’s claim that they were not involved is demonstrably false.

“The so-called Proud Boys, often cited as a ‘far-right’ organization and said to be somehow responsible for January 6, was led by one Enrique Tarrio, an fbi informant,” wrote Angelo Codevilla, a professor emeritus at Boston University. “The so-called Oath Keepers, the group most cited and said by government sources to be most involved in that day’s events, is led by one Stewart Rhodes, another fbi asset. In fact, the Justice Department lists some 15 participants in the event against whom it brings no charges, either for ‘insurrection’ or even for trespassing, because these individuals are paid infiltrators. They work for the fbi or other U.S. intelligence agencies. The U.S. government refuses to expose what these persons did because they did it on the government’s behalf.”

If Pelosi and her committee want the truth of what happened on January 6, they need to stop trying to attach it to the man who actively instructed those involved to be peaceful, nonviolent and respectful of the law and of law enforcement. They need to start investigating the role of leftists, including those in the fbi, of inciting violence. Surely the 14,000 hours of surveillance video the government has kept secret might help in such an investigation.

But this will not happen because, like the investigation of Special Counsel Robert Mueller, the entire point of the January 6 committee is to cover up fbi corruption and provide the federal government with an excuse to target Trump supporters.

Regarding the time we are living through now, the Prophet Isaiah wrote, “And judgment is turned away backward, and justice standeth afar off: for truth is fallen in the street, and equity cannot enter. Yea, truth faileth; and he that departeth from evil maketh himself a prey: and the Lord saw it, and it displeased him that there was no judgment” (Isaiah 59:14-15).

Everything is upside down. Those who call out election theft are condemned as insurrectionists, while those who actually stole the election are called champions of democracy. Those who tell violent protesters to go home are accused of treason, while those who stir up violence go unpunished.

If people are to have one last chance to repent of the sins that led this nation into such dire straits, God is going to have to perform a mighty miracle to temporarily cleanse our government of such vile corruption!

For an explanation of one sobering prophecy that will help you understand the crisis in this country, please read my father’s article “America Has No Helper” from the April 2021 issue of the Philadelphia Trumpet.