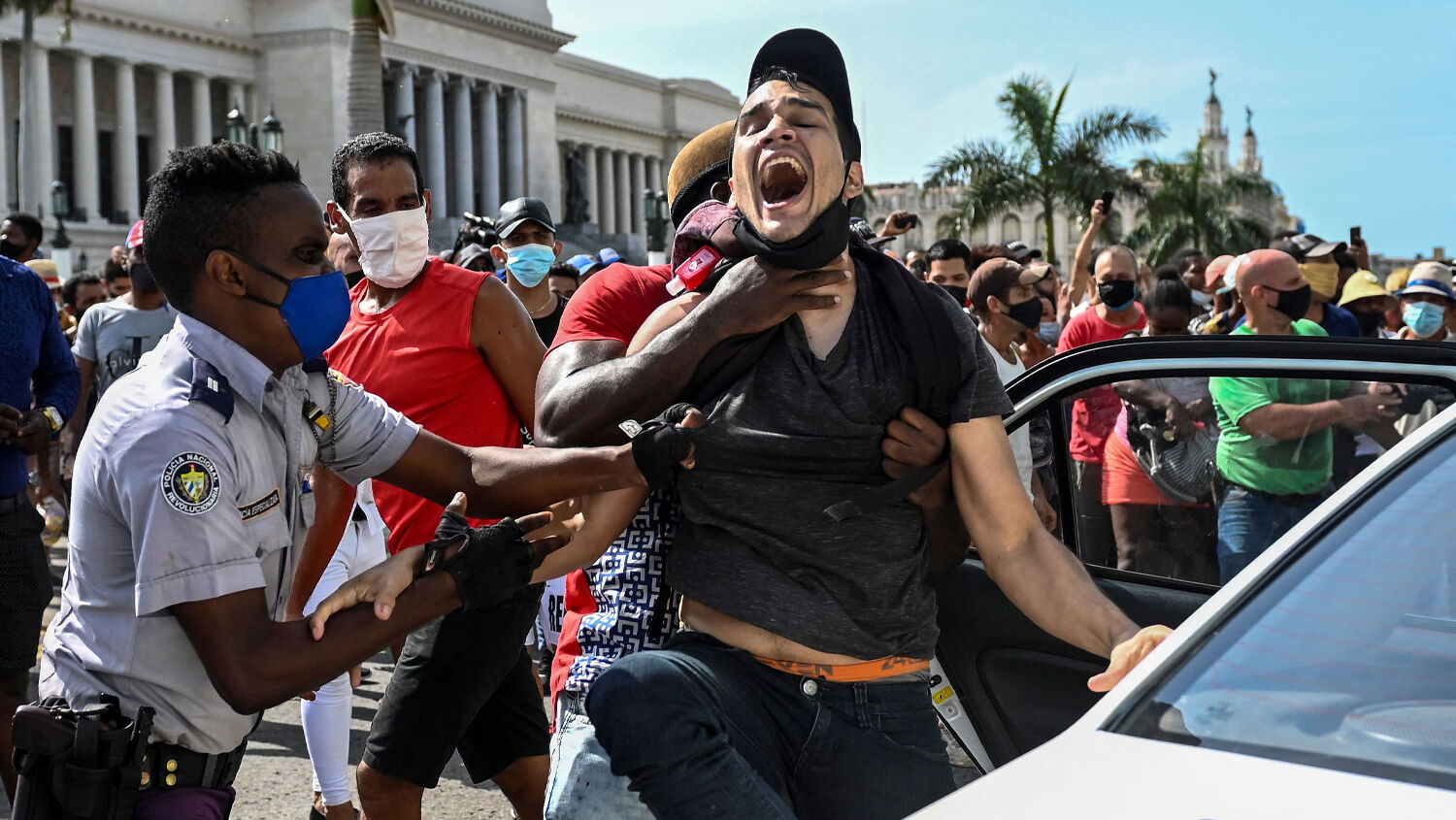 A man is arrested during a demonstration against the government of Cuban President Miguel Diaz-Canel in Havana, on July 11, 2021.
YAMIL LAGE/AFP via Getty Images

Unprecedented protests broke out in Cuba yesterday. Chanting “freedom” and “down with the dictatorship,” thousands marched in cities across the country. “I have never seen such a protest in my life,” one demonstrator told the Washington Post.

“This is pretty massive,” said another. “My sense is that this is a combination of social unrest based on a lack of freedoms, and covid, and economic conditions. The lack of access to electricity. The blackouts. … People are screaming for freedom.”

But until recently, the silence from the White House has been deafening. The first statement came from Julie Chung, acting assistant secretary in the State Department Bureau of Western Hemisphere Affairs: “Peaceful protests are growing in Cuba as the Cuban people exercise their right to peaceful assembly to express concern about rising covid cases/deaths and medicine shortages. We commend the numerous efforts of the Cuban people mobilizing donations to help neighbors in need.”

Many, including Florida Sen. Marco Rubio, were outraged. There’s a lot more to these protests than people expressing “concern about rising covid cases.” “Why are they so uncomfortable coming forward and just condemning this evil socialist, Marxist regime?” asked Rubio.

Perhaps due to this pressure, United States President Joe Biden finally commented on the protests today. “We stand with the Cuban people and their clarion call for freedom and relief from the tragic grip of the pandemic and from the decades of repression and economic suffering to which they have been subjected by Cuba’s authoritarian regime,” he said.

But does he really? The facts show this administration does not stand with the Cuban people.

In 2014, the Obama administration stepped in to save, not the Cuba people, but the Communist government. Trumpet editor in chief Gerald Flurry wrote at the time:

When Russia and Venezuela, the main sponsors of the Castro regime, started suffering in the last few months due to falling oil prices, it looked as if the Castro government could finally collapse. That could have paved the way for democracy to finally prevail for Cubans. What the Castro brothers needed in order to survive was an economic lifeline from their enemy, the United States.

Then President Barack Obama provided that lifeline. Urged by Pope Francis, he concluded a deal with the Cuban administration. It required no reforms from the government of Cuba. Instead, it gave the regime international legitimacy. It ended the trade embargo and allowed mail and flights between Cuba and the U.S. to resume. Tourists—and their cash—flooded in. The Castros were saved.

“Anybody familiar with the Castro regime’s track record knows that legitimizing and propping it up is not in the interest of the people of Cuba!” wrote Mr. Flurry. “This is a bad deal for the Cubans.”

It was also a bad deal for the United States. “Under the Castro regime, Cuba has acted as one of the Western Hemisphere’s major sponsors of terrorism and drug trafficking,” Mr. Flurry continued. “For America, this was a disgraceful surrender. The president undid a strategy that the nation had been using for 53 years, a strategy that might have been on the verge of toppling one of the world’s most renowned criminal regimes.”

Now though, the pressure on the Communist government is stronger than any time in recent history. Surely a U.S. administration wouldn’t stand still and let this opportunity pass it by.

The Obama administration ignored a similar opportunity in 2009 when protests swept across Iran in what is now known as the Green Revolution. “The agency has contingency plans for supporting democratic uprisings anywhere in the world. This includes providing dissidents with communications, money and, in extreme cases, even arms,’ writes Jay Solomon in his book The Iran Wars. “But in this case. the White House ordered it to stand down.” A golden opportunity to topple one of America’s greatest enemies in the Middle East was neglected.

In February, Geopolitical Futures founder George Friedman warned that China could use Cuba “as a lever that threatens the U.S. as the U.S. threatens China.”

“It must be a threat near the U.S. and one that involves maritime access to the globe,” he wrote. “The only point from which this can be achieved without placing a major fleet off of Long Beach would be Cuba.”

Cuba is the cork in the bottle that can shut off the bulk of America’s overseas trade. It’s a convenient base for striking at the heart of America.

America’s enemies know the strategic importance of Cuba. How could the Obama administration be ignorant of it?

The answer is that it isn’t.

The Obama administration, which is really governing America today through Mr. Biden, does not have America’s best interests at heart. It’s the only way to explain their repeated decisions that harm America.

The Cuba protests provide another opportunity to watch this play out. European leaders, and especially Pope Francis, wanted America to open up Cuba. Mr. Obama went along. This is allowing Europe to gain a foothold on this critical island.

What will happen this time?

The Biden administration’s response will be driven by the same considerations. It’s possible Europe, and the pope, may consider a switch in sides to be in their interest. The pope lobbied strongly to open up Cuba; he might be disappointed by the Castro regime’s response. In this case, the European Union, the pope and even the Biden administration may back the protesters.

But just as under Mr. Obama, the welfare of the Cuban people and the interests of the United States won’t be the dominant considerations.

Why would a presidential administration work against its own country? It sounds improbable.

It’s a reflection of an unseen spiritual dimension of America’s decline. “The nation’s foreign policy is utterly transformed,” writes Mr. Flurry in his booklet Great Again. “We have seen apologies, concessions and surrenders made to dictators and despots, while longtime alliances, like those with the United Kingdom and the Jewish state of Israel, have been cast aside. Nations that have relied on America for leadership, strength, security, protection and largesse face a new reality and are having to forge alternate relationships, even if they undermine America.

That booklet explains what is happening in America. It has a chapter on Cuba. But more importantly, it describes the real roots of America’s decline, where it is leading, and what you can do about it. As with all of our material, we wouldd be happy to send you a free copy of Great Again today.