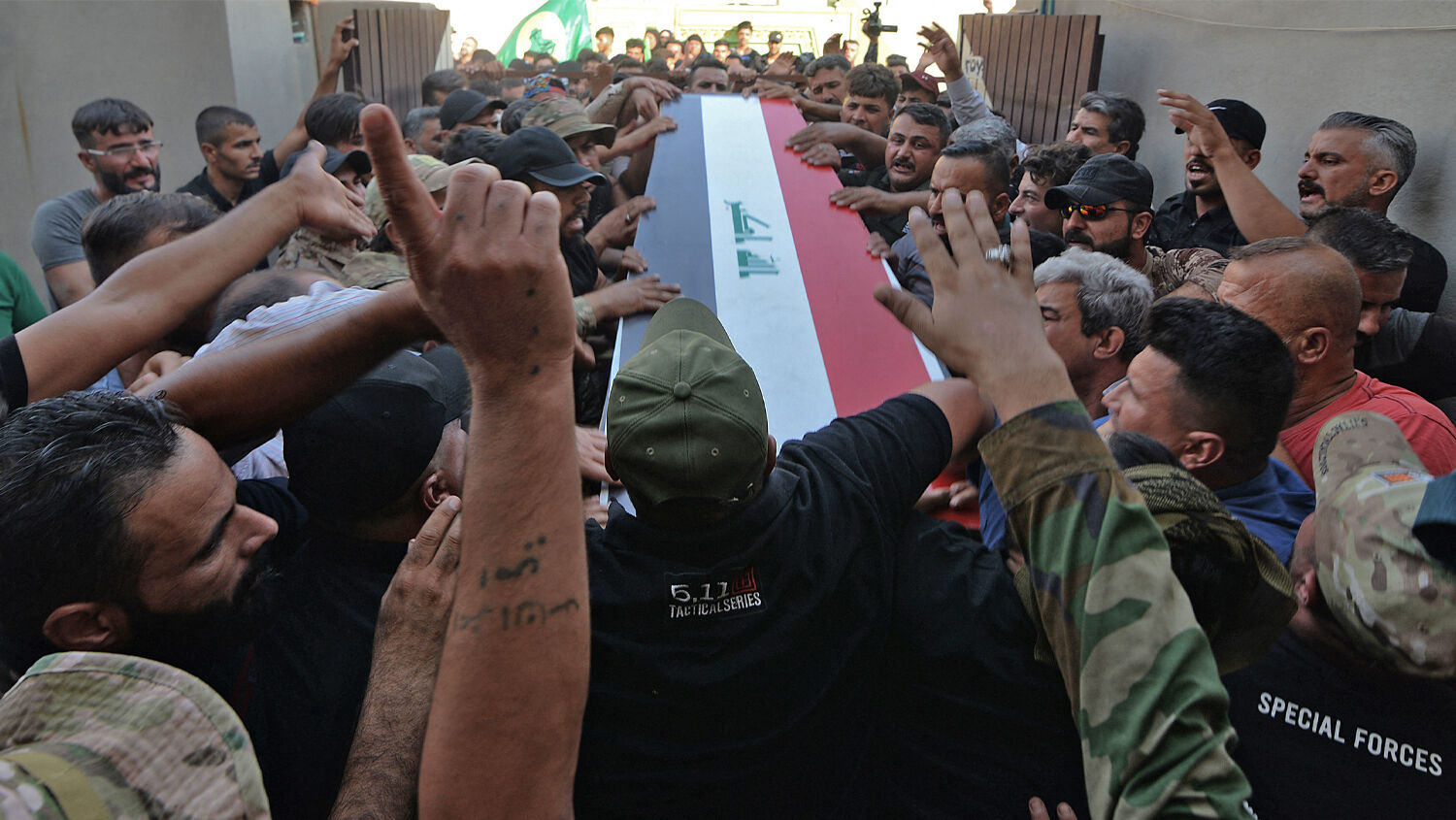 Iraqi mourners attend the funeral of a fighter of Hashed al-Shaabi paramilitary alliance following US air strikes on the Syrian-Iraqi border, on June 28, 2021 in the northern Nineveh province.
ZAID AL-OBEIDI/AFP via Getty Images

What was the real purpose behind the Biden administration’s latest air strikes?

According to the Pentagon, the strikes were in response to the “ongoing series of attacks by Iran-backed groups targeting U.S. interests in Iraq.” Their purpose was to “send a clear and unambiguous deterrent message.” Did the militias and Iran receive that message?

Far from being deterred, the militia groups, vowing revenge, fired rockets at a U.S. military base in Syria the next day. No U.S. casualties were reported. Then, overnight on July 6, American forces at a base adjacent to the Erbil international airport in Iraqi Kurdistan faced a barrage of missiles and armed drones. This followed a July 5 attack where the U.S. embassy in Baghdad was targeted by an armed drone. Time will prove that these attacks were ordered by Iran.

Michael Knights, Bernstein Fellow of the Washington Institute, wrote, “[T]hus far, [the Biden administration] has struck back just twice in response to 24 rocket and drone attacks over the past five months. If this response ratio continues, militias will simply keep escalating, and American lives will be lost.”

The Biden administration has been hesitant to respond to provocations and unwilling to respond as strongly as President Donald Trump. “This is the way to achieve real deterrence—by making leaders accountable through their property or lives if attacks do not cease,” Knights wrote. President Trump proved this when he ordered the strike against Islamic Revolutionary Guard Corps Cmdr. Qassem Suleimani.

The recent air strikes were too weak to be a deterrent. So what was their goal?

Pelosi said, “Protecting the military heroes who defend our freedoms is a sacred priority.” Yet if protecting U.S. troops was the goal of these air strikes, why is the Biden administration withdrawing anti-missile batteries from several Arab states, including Iraq? Removing these batteries will only put U.S. troops and allies in greater danger.

The reality is, the Biden administration is trying to save face.

Many of the attacks on U.S. forces in Iraq have come from Iran-backed Shiite militias. These proxies allow Iran to attack U.S. personnel and bases with a thin cloak of deniability. Yet when the Biden administration chooses to retaliate, it strikes targets of little actual value as far away from Iran as possible.

Also, the United States has started to lift sanctions on Iran even without a nuclear deal. On June 10, the U.S. agreed to remove sanctions on several energy companies and former officials. U.S. State Department spokesman Ned Price suggested that the removal of sanctions was a reward for good behavior. In addition to lifting these sanctions, Washington unfroze $16.2 million. Iran used the money to pay its late United Nations dues, so it could vote once again.

Despite ongoing nuclear negotiations with the United States, Iran “elected” one of its most radical presidents yet. Ebrahim Raisi earned the title “butcher of Tehran” for executing thousands of political prisoners. Trumpet Jerusalem correspondent Brent Nagtegaal summed up Raisi’s appointment, writing:

[T]he ayatollah is telling the world—and particularly the West: Yes, we are a religious regime that won’t let anything overthrow our clerical rule. Yes, we will continue exporting the Islamic revolution across the world, supporting and arming like-minded terrorist organizations as we see fit. And yes, we also have a nuclear program and are on route to obtaining nuclear weapons and the delivery systems to use them. What are you going to do about it?

Upon the election of this radical, the U.S. carried on with the negotiations as if nothing happened.

The Biden administration has been surrendering to Iran in area after area. But the rest of the world is not blind to the administration’s weakness. It had to do something to save face. As the Jerusalem Post concluded, “The strikes may be more of an example of doing something just so that the U.S. can say it did something.”

The message the administration is sending by its actions is clear: The United States is weak and desperate for a nuclear deal with Iran. The current administration is packed with people from Barack Obama’s time in the White House, and they will do anything to revive the cornerstone of his legacy: the Joint Comprehensive Plan of Action.

Why would God do this? There is a hope-filled reason! Mr. Armstrong continued:

Notice now verses 23-25 [Revised Standard Version]: “And if by this discipline you are not turned to me, but walk contrary to me, then I also will walk contrary to you, and I myself will smite you sevenfold for your sins. And I will bring a sword upon you … and you shall be delivered into the hand of the enemy.” …

Get the real meaning of this! Our sins have brought punishment. …

God is going to keep multiplying chastening—correction—upon our peoples until they do turn from their evil ways—until they turn to the ways that cause peace, happiness, prosperity, all the good things! …

How great is our God—and what love for our peoples He expresses, in patiently tolerating and correcting us until we accept His boundless blessings!

America is continually exposing its weaknesses for all the world to see, proving that God has in fact broken the pride of our power. Yet eventually, America will turn back to God. To learn more about the immediate future of our nation, and the hope just ahead, read The United States and Britain in Prophecy.