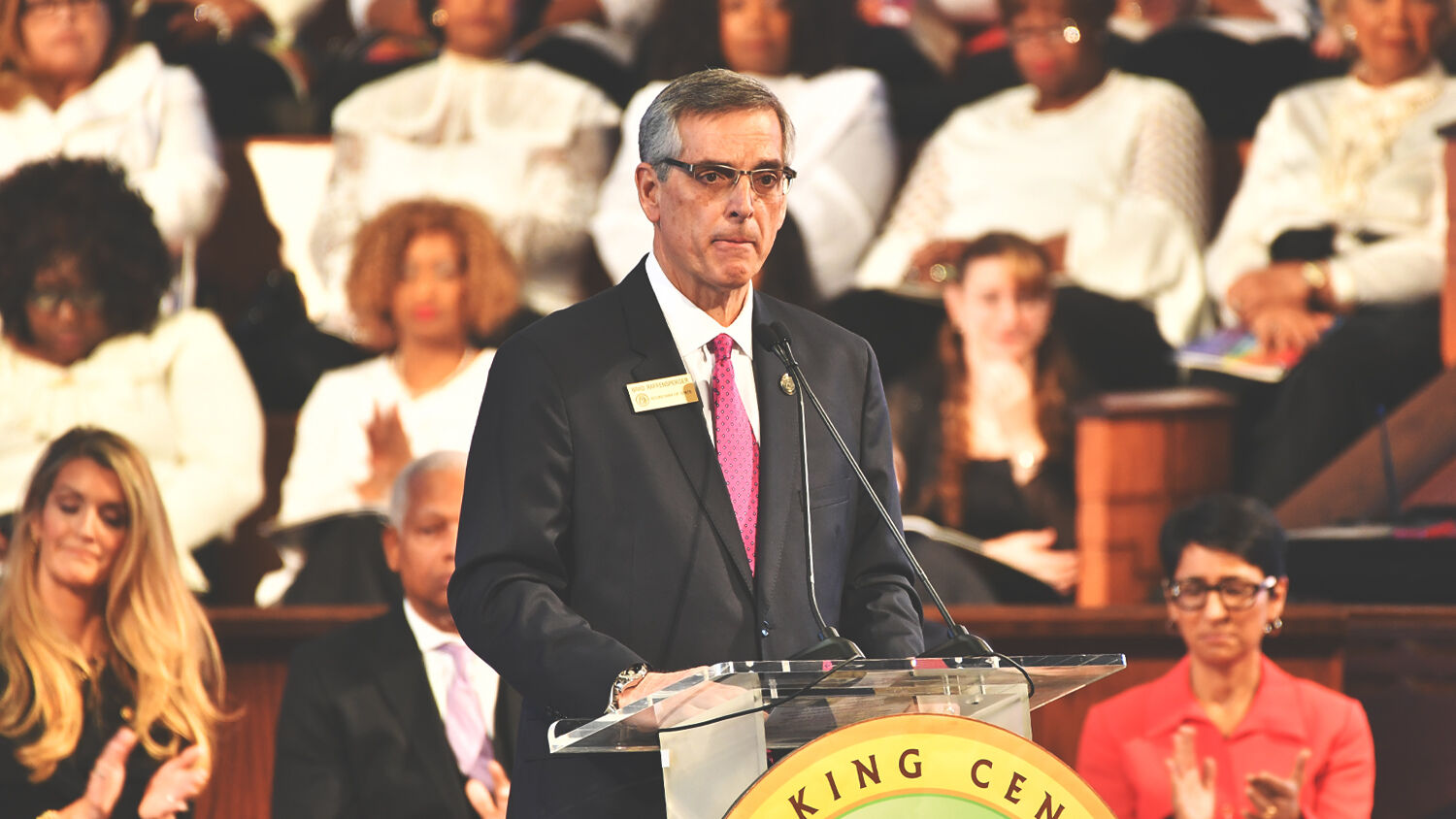 Georgia’s secretary of state knew about thousands of potentially invalid ballots in one county, but said nothing until now.

Georgia Secretary of State Brad Raffensperger has misrepresented facts to bolster his claims that the 2020 United States presidential election results have been thoroughly vetted. He hired an independent contractor to monitor the ballot counting at the State Farm Arena in Atlanta, Georgia, on election night. (This is where evidence, some of which is on video, shows election workers sending journalists and Republican monitors home, then continuing to count ballots and even pulling out boxes of ballots from beneath a table and begin counting them.) The contractor observed hundreds of other irregularities, documented them, and handed a report to Raffensperger on November 13. Seven days later, Raffensperger wrote an opinion piece for the Washington Post titled “Georgia’s Election Results Are Sound.”

Why did he lie?

The report given to Raffensperger and other Georgia officials highlighted significant irregularities, ranging from identical vote tallies repeated multiple times to large batches of absentee ballots that appear to be missing from the official ballot-scanning records. According to Just the News investigative journalist John Solomon, “The problems in predominantly Democratic Fulton County potentially impacts thousands of ballots in a presidential race that Joe Biden was certified as winning statewide by fewer than 12,000 votes. The memos reviewed by Just the News include the handwritten tally sheets for all absentee ballots counted by the county as well as a private report from a contractor hired by Secretary of State Brad Raffensperger to monitor the Atlanta-area election process. The report, which chronicled seven days of problems, recorded troubling behavior like the mysterious removal of a suitcase of sensitive election data known as polls pads, used to authenticate voters.”

One official working for Raffensperger told Just the News that there was evidence of human failure in Fulton County’s election administration, and identical ballot batches likely resulted in 1,000 extra votes being tallied.

“Restoring confidence in our elections is going to be impossible as long as Fulton County’s elections leadership continues to fail the voters of Fulton County and the voters of Georgia,” Raffensperger posted to Twitter on June 14. “They need new leadership to step up and take charge.” Later he posted, “New revelations that Fulton County is unable to produce all ballot drop box transfer documents will be investigated thoroughly, as we have with other counties that failed to follow Georgia rules and regulations regarding drop boxes. This cannot continue.”

So Raffensperger oversaw an election full of potential fraud. He received the Fulton County report on hundreds of ballot irregularities. Then he wrote a Washington Post article saying that Georgia’s election results were sound and that, in fact, its process for verifying the accuracy of ballots was “the gold standard in election integrity.”

But then he found out that an investigative journalist had gotten hold of that same report. Now he tells the world that people have lost confidence in the election results. And who does he blame? Definitely not himself!

Joe Biden won Georgia by fewer than 12,000 votes, so a few big irregularities in the state’s most densely populated county could have changed the election result. On June 24, Henry County Superior Court Chief Judge Brian Amero allowed a lawsuit alleging fraud in Fulton County to move forward; county officials are now preparing for a forensic audit of 147,000 absentee ballots to determine how many illegitimate ballots are among them. If this audit proves that there really were thousands of fake ballots, it could open the door to overturning the whole election.

“We had safe, secure, honest elections,” Raffensperger told 60 Minutes in January. “The results are disappointing if you are a Republican, but those are the results.” Yet now he says that Fulton County election officials did such a bad job that they should be fired! But somehow the election results are still sound? Sounds like Raffensperger knew there were serious problems but lied to the American people because he was desperate to oust Donald Trump from office and move on as quickly as possible.

Raffensperger defended himself to Just the News, saying that his private monitor’s assessment was that fraud did not occur at a scale large enough to impact the election’s outcome. “It is no secret that Fulton has had issues in their elections department for decades, which is why I insisted on a state monitor being present to be eyes and ears on the ground,” he said. “He did not see any evidence of fraud despite having full access, but he saw continued mismanagement, miscommunication, unpreparedness and sloppiness. Georgia voters deserve better.”

Yet this comment is far different from his earlier remark that Georgia’s process for verifying the accuracy of elections was “the gold standard in election integrity.” And when Just the News reviewed the private monitor’s assessment, they found that more than 10,000 absentee ballots were assigned tracking numbers, but were not subsequently recorded in the handwritten logs, which means those ballots may be missing. They also found that more than two dozen batches of absentee ballots (roughly 2,400 ballots) were double-scanned on the tally sheets, and that five batches of absentee ballots each appeared with the exact same vote count of 392 for Biden, 96 for President Donald Trump, and 3 for Jo Jorgensen (officials say this is a statistical impossibility).

That is roughly 13,000 improperly processed ballots (and Biden won Georgia by less than 12,000 ballots). Raffensperger received this report six months before Just the News obtained a copy. So, his self-righteous platitudes about firing Fulton County officials are just a way of deflecting blame from himself. He knew about the ballot fraud in Fulton County and he knew it was widespread enough to steal the election. Yet he did nothing until after Biden’s first 100 days in office so that Donald Trump would be unable to challenge the result until it was too late.

No reasonable person can honestly conclude the 2020 presidential election was free and fair. And no observant person can honestly reason that fraud made no difference. Brad Raffensperger and the propaganda media know Fulton County was rigged, so they are doing everything they can to discredit attempts to expose election fraud.

We at the Trumpet know that widespread election fraud will be exposed. We base that on Bible prophecy.

In his article “Why I Still Believe Donald Trump Is Coming Back,” my father explained that Donald Trump is an end-time type of Israel’s King Jeroboam ii. He also explained a Bible prophecy in which God promises to save America from destruction, temporarily, through such a man.

“And the Lord said unto me, Amos, what seest thou? And I said, A plumbline. Then said the Lord, Behold, I will set a plumbline in the midst of my people Israel: I will not again pass by them any more” (Amos 7:8).

“We have been watching this prophecy since June 1990, in the second issue of the Trumpet we ever produced,” my father wrote. “It speaks of a time when God is preparing to measure the destruction of end-time Israel—the United States and Britain—and He says, ‘I will not again pass by them any more’ (verse 8). This is just before severe correction comes on these nations if they don’t repent. They are receiving their final warning. … So the entire context of God saying I will not again pass by them anymore is the time of ‘Jeroboam’—an end-time antitype of King Jeroboam ii of Israel.”

This prophecy is why we continue to insist that President Trump will return to power. We do not know exactly how this will unfold, but there is a good chance that nation-shaking election fraud in Georgia and beyond will be exposed this summer.