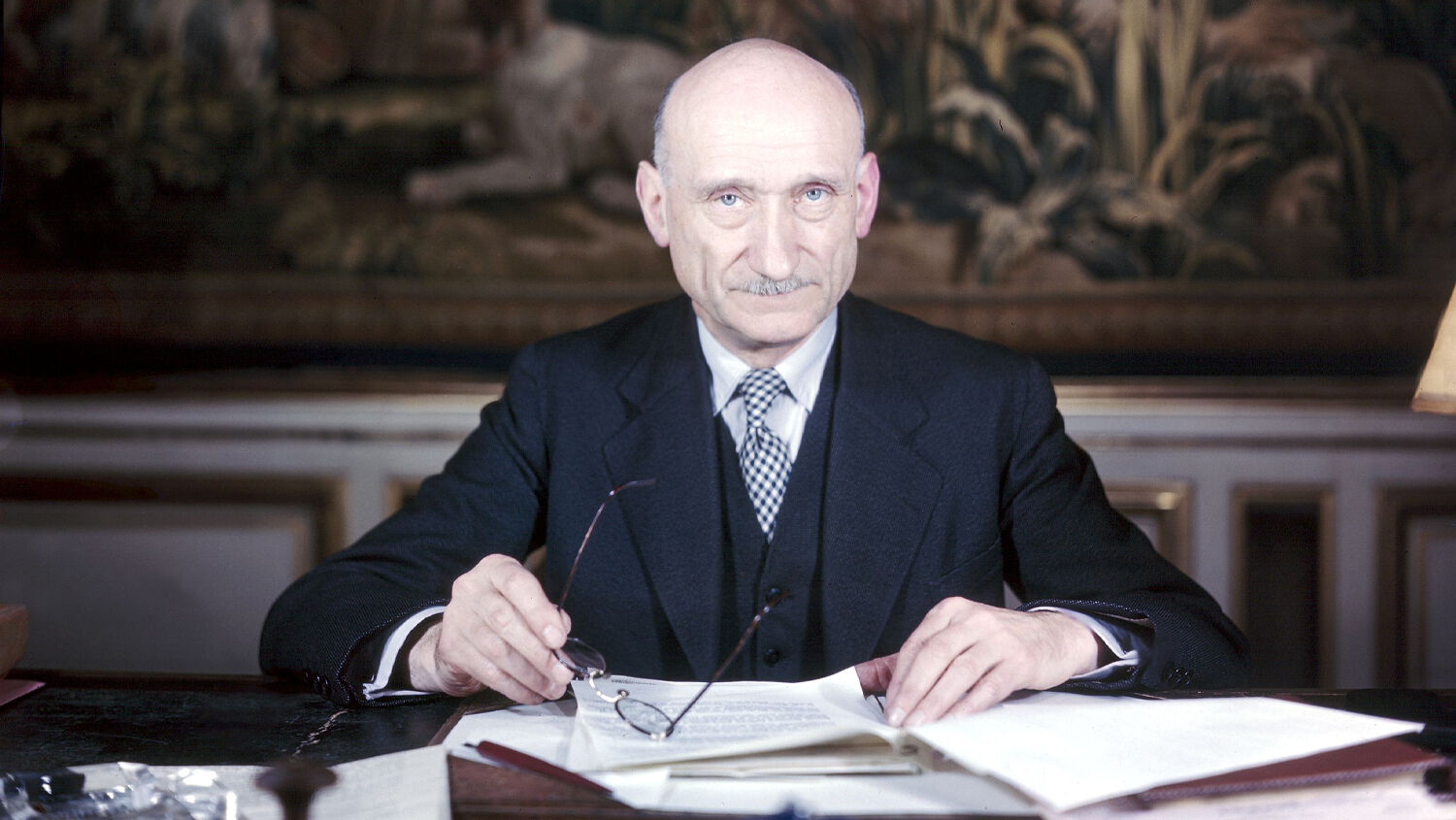 Robert Schuman, president of the European Parliamentary Assembly, at his desk in Strasbourg around 1960
Keystone-France/Gamma-Keystone via Getty Images

It’s not every day a politician is made a saint. In fact, the last man canonized for his political work was Sir Thomas More, who opposed Henry viii’s marriage to Anne Boleyn. That was quite a while ago: Sir Thomas died in 1535 and was made a saint in 1935.

On Saturday, Pope Francis put the former French Prime Minister Robert Schuman on the path to sainthood by recognizing his “heroic virtues.” The Vatican will have to recognize one miracle by Schuman for him to be beatified, and a second to become a saint.

What does a politician have to do to be made a saint? The answer reveals something critical about the modern world.

Schuman is one of the “founding fathers” of the European Union. His “Schuman Plan” proposed the European Coal and Steel Community—a trading union that would pave the way to political union.

Schuman, a Catholic, saw his work in Europe as part of his religious duty. All of the European founding fathers were Catholic. Several others are also in the early stages along the path to sainthood.

Deutsche Welle noted in its article on Schuman: “Since Pius xii, the pontiff during World War ii, popes have supported the principle of a European project while criticizing its secularism.” It’s something too many have forgotten or never realized.

In 1962, Britain’s Topic magazine wrote: “The Vatican, usually cautious over political changes not of its own inspiration, now considers the Common Market the work of divine providence. Not since the times of Spain’s Charles v has a Roman Catholic political force been so strongly welded. Not since the end of the Holy Roman Empire has the Holy See been offered a Catholic rallying point like the Common Market. If the ‘Pact of Rome,’ which created the Common Market, had been signed within the Vatican walls, it could not have favored the church more.”

In The Principality and Power of Europe, a book exposing the origins of the European Union, Adrian Hilton writes, “Europe’s leaders and the Roman Catholic Church are still working together towards the common goal of unity. Many of Europe’s political leaders … see a crucial role for the Roman Catholic Church in their efforts, providing a powerfully cohesive common religion to hold Europe together politically” (emphasis added).

Pope John xxiii said that Catholics should be “in the front ranks” of those supporting the European project. Pope Paul vi said, “Can it not be said that it is faith, the Christian faith, the Catholic faith that made Europe? It is there that our mission as bishops in Europe takes on a gripping perspective. No other human force in Europe can render the service that is confided to us, promoters of the faith, to reawaken Europe’s Christian soul, where its unity is rooted” (emphasis added).

The current pope is simply the latest to remind Europeans of their religious history and encourage them to revive it. “Europe, find yourself!” he wrote in a letter published Oct. 22, 2020. “Rediscover your most deeply rooted ideals. Be yourself! Do not be afraid of your millenary history, which is a window open to the future more than the past.”

More people should be aware of the European project’s religious origins. There is a long history of the Catholic Church and politics not mixing—or rather, of them mixing and it not working out well. As recently as World War ii both Benito Mussolini and Adolf Hitler signed critical agreements with the Catholic Church, gaining Catholic support for their rule. They were following the example of Napoleon Bonaparte, who signed a similar deal 150 years before. And he was following the example of the medieval Holy Roman Empire, a system of rule going back centuries, where the Catholic Church worked hand in glove with secular kings.

If we’re considering the actions of a church, we should judge them by what the Bible says.

But the Bible does describe another church—symbolized by a woman—in Revelation 17. This church is a superpower. It deals with “the kings of the earth” and has great wealth and power. But God does not approve of its behavior. A church should choose Him over this world’s governments, but this church has “committed fornication, and the inhabitants of the earth have been made drunk with the wine of her fornication” (verse 2).

Revelation 17 describes this church riding and steering a beast, an empire in Bible prophecy. This beast has seven heads—it rises and falls seven times, one after the other. At times it appears to be dormant, only to return.

Revelation 13 describes the same picture with different symbols. Here, this woman is described as another beast, one which looks like a lamb (verse 11). It looks like Christ—and many people believe it’s His Church, but it teaches the world to worship the Holy Roman Empire (verse 12). It patterns itself after Roman-syle government and teaches the world that the Holy Roman Empire is part of God’s plan for man.

In the November 1965 Plain Truth, Herbert W. Armstrong wrote about one “hard, stern fact” that the nations of Europe must face: “That crucial fact is this: The nations of Europe are utterly unable to unite themselves by their own political maneuvering.”

“How, then, can they agree together and unite?” he asked. “For years the Plain Truth has said these nations are going to have to realize their inability to unite themselves politically—to choose a common political-military leader that all can trust. They are going to finally face the fact they must look to a supreme authority they can all trust! That supreme authority cannot be a politician or a general …. The only possible answer is a religious leader!”

“Watch for developments suddenly to speed toward European political and military union, through religious union!” he wrote.

It’s only through the Vatican’s role as a mediator and peacemaker that the bickering nations will come together.

History alone sounds a powerful warning on what is happening in Europe. But Bible prophecy gives an even more specific warning. It prophesied the history of this church-state combine in great detail. You can study that history and see so much of that prophecy proved true already. Our free book The Holy Roman Empire in Prophecy will show you what the Bible prophesies and how world events over the past 2,000 years have matched exactly.

This Bible prophecy gives you something else history cannot. So many of these prophecies come from the book of Revelation—a book God the Father Himself gave (Revelation 1:1). Understanding this prophecy shows us that the Father is in control of all these events, and He is working them all out according to a definite plan. There is tremendous hope in knowing that the loving God is in charge of these world events and He is closely watching and shaping them according to His purpose.