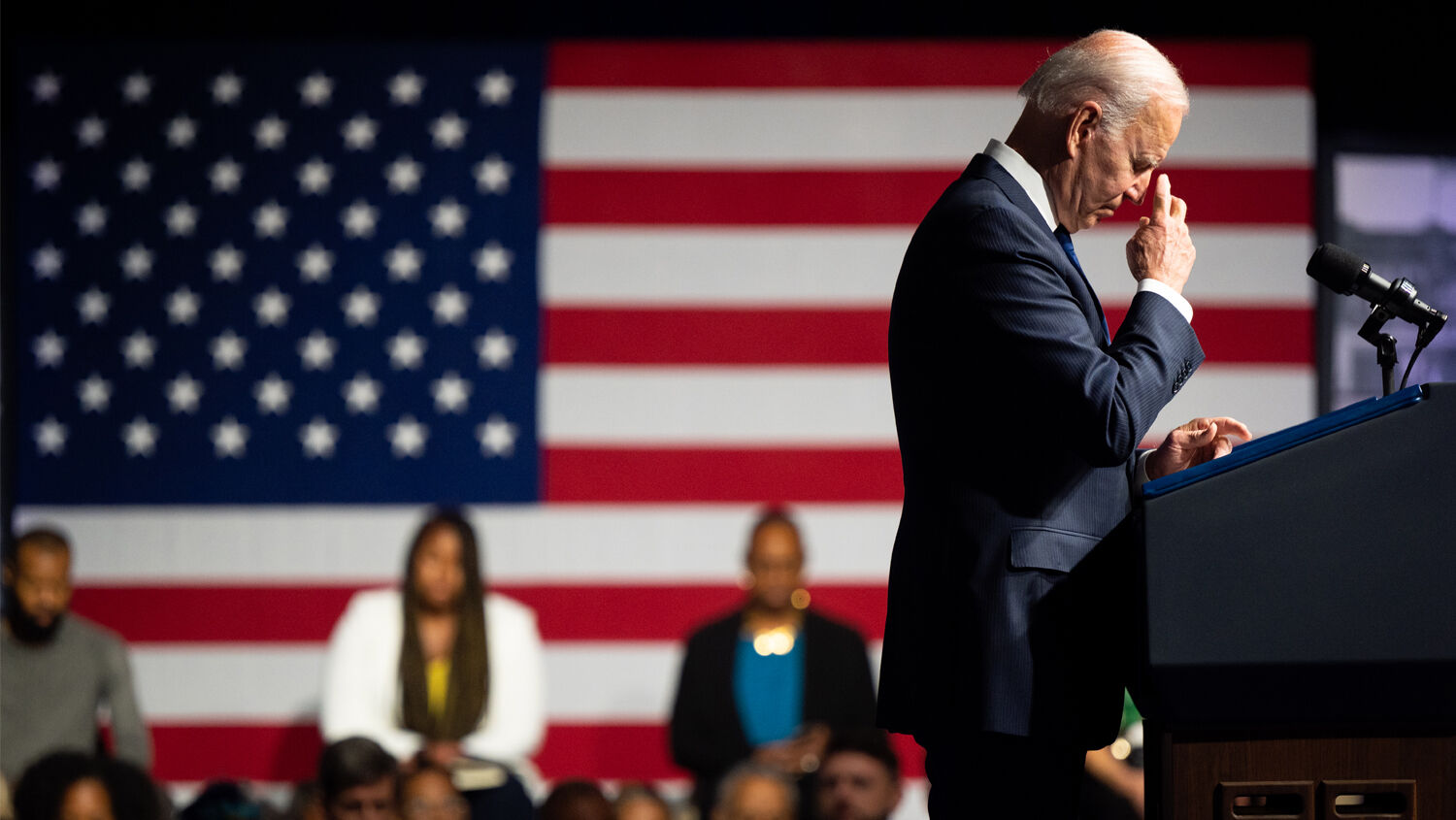 Race-baiters are accusing white Americans of harboring the kind of hate shown during the 1921 Tulsa massacre.

Sunday was the 77th anniversary of the World War ii D-Day invasion. It was the largest seaborne invasion in history, it liberated Western Europe, and it was the beginning of the end for Nazi Germany and Adolf Hitler. Yet there was no mention of this historic event or the brave soldiers who fought in it on any of Joe Biden’s Twitter accounts. When you have an entire team of high-level people helping you with such things, it’s hard to imagine that this was a mistake.

What he did share online was a video about a riot that occurred a little over 100 years ago in Tulsa, Oklahoma. This too was by design, of course. Why? Because it was a race riot and one in which white residents attacked and killed black residents and destroyed their district, Greenwood.

One Homeland Security source told Fox News that service members and veterans were upset that Biden snubbed such a momentous, deadly day in armed forces history. But his decision to spotlight the Tulsa riot above D-Day is directly from his administration’s priorities! Joe Biden and those around him have the priority of convincing Americans that their nation is systemically racist. So he focuses on incidents like the Tulsa riots above things like America’s role in liberating a continent from a man who murdered 6 million people due to their race.

This is not the first time Biden has used the 1921 Tulsa riot to fan flames of hate. On June 1, he visited Oklahoma to mark the 100th anniversary of the riot alongside racial activist Jesse Jackson and to give a speech in which he said, “Look around at the various hate crimes against Asian Americans and Jewish Americans. Hate that never goes away. Hate only hides. Jesse, I think I mentioned this to you: I thought after you guys pushed through with Dr. King, the Voting Rights Act, and the Civil Rights Act, I thought we moved. What I didn’t realize—I thought we made enormous progress, and I was so proud to be a little part of it. But you know what, Rev? I didn’t realize hate is never defeated; it only hides. It hides. Given a little bit of oxygen, just a little bit of oxygen by its leaders, it comes out of there from under the rock like it was happening again, as if it never went away.”

The Tulsa race riot was undoubtedly a dark episode in American history. But Joe Biden was not giving just a history lecture on what we can learn from the Tulsa riots: He was accusing modern white Americans of engaging in the same kind of hate demonstrated during those riots, and he was doing so while deliberately taking pains to neglect positive eras of American history like liberating all of Europe from Hitler and the Nazis!

“Marxism was built on the theory of class conflict,” wrote Andrew Miiller in “Why Does Joe Biden Want Schools to Teach That America Is Systemically Racist?” “Karl Marx believed that the only way to end poverty was for the working class to overthrow the capitalist class in a violent revolution. But Marxism only became popular in feudal societies like Russia and China, where the people were poor and desperate enough to risk everything in a people’s revolution. In free-market societies like the United States, people could escape poverty through education, hard work and good citizenship. So the theory of class conflict never took root in the U.S. like it did in Asia, Africa and Latin America. Rather than give up on their dream for a socialist society, Marxist scholars in the U.S. substituted race for class and sought to create a revolutionary coalition of ethnic minorities against a white majority. In 1989, Kimberlé Crenshaw organized a retreat titled New Developments in Critical Race Theory that effectively created a new kind of communism where race conflict replaced class conflict in the quest to overthrow free-market capitalism and replace it with socialism.”

That is why Biden has race-baiters like Jesse Jackson, Al Sharpton and the usual suspects sitting behind him during his speech. Critical race theory teaches that racism is in the dna of white people; it was bad in 1921 and it is bad today. In that quote, Biden used the word “never” three times. He said he realizes that hate never goes away. That fits perfectly into critical race theory. The sentiment is: You are never going to stop being white, so you are never going to stop being hateful. You are not so different from the Tulsans of a century ago.

Biden and those with him are using events like the Tulsa anniversary not to mark progress in race relations or to learn lessons but to stir up racial hatreds! They are fanning the flames into race warfare. Only when America is weakened and plunged into crisis will they be able to overthrow the entire system so they can try to replace it with a new one!

Look at what he said and ask yourself if this man is using his prominence to heal America or to hurt it. He said in that same speech: “Just close your eyes and remember what you saw in Charlottesville four years ago on television. Neo-Nazis, white supremacists, the kkk coming out of those fields at night in Virginia with lighted torches—the veins bulging on their—as they were screaming. Remember? Just close your eyes and picture what it was. … As I said in my address to the joint session of Congress: According to the intelligence community, terrorism from white supremacy is the most lethal threat to the homeland today. Not isis, not al Qaeda: white supremacists.”

While he was campaigning for the presidency, Biden talked quite a lot about the 2017 rally that occurred in Charlottesville, Virginia, in which a white supremacist rammed into a crowd of liberal protesters, killing one. Biden basically promised that he would restore decency and honesty to America. But during his first 100 days in office, he has done everything in his power to promote critical race theory and tell millions of Americans not that a few thousand Ku Klux Klan members and others are racist, but that their entire country is systematically racist. His message isn’t bringing people together. It is balkanizing America into feuding factions.

Biden even tried to equate the Capitol Hill protest from this past January with the Tulsa massacre. Yet the only person killed at Capitol Hill on January 6 was a Trump supporter. These two events have nothing in common. In fact, much of the video footage of the Capitol Hill protests shows people nonchalantly roaming the halls of Congress being supervised and unimpeded by police.

But leftists need people to think white supremacy “is the most lethal threat to the homeland today,” or they will lose their power.

James Taranto wrote in his 2010 Wall Street Journal editorial “Why the Left Needs Racism”: “The political left claims to love racial diversity, but it bitterly opposes such diversity on the political right. This is an obvious matter of political self-interest. … To keep blacks voting Democratic, it is necessary for the party and its supporters to keep alive the idea that racism is prevalent in America and to portray the Republican Party (as well as independent challengers to the Democrats, such as the tea party movement) as racist. The election of Barack Obama made nonsense of the idea that America remains a racist country and thereby necessitated an intensifying of attacks on the opposition as racist.”

This is what racial Marxism looks like, and it’s only getting worse under Biden. Tens of millions of white voters brought Barack Obama into the highest office in the land and the most powerful office on Earth. He then used his power to insinuate that the whole nation was racist and to exacerbate racial divisions. Now Biden is in the White House, surrounded by many of Obama’s staffers, as the former president proudly pointed out in a recent interview. He also said Biden is there to “finish the job” he started.

Eleven years on from that editorial, polls show Democrats have been losing black male support since 2008, the same year Obama was elected president. So Democrats are resorting to scaremongering about things that happened 100 years ago to keep their voting base mobilized. While radical liberals like former Central Intelligence Agency Director John Brennan say the Capitol Hill protest highlights the need for the Biden administration to move in “laser-like fashion to try to uncover as much as they can about” a pro-Trump “insurgency,” the reality is that the walls are closing in on the neo-Marxists in America. Black and Hispanic Americans are waking up to the fact that conservatives who believe in the basic rights and freedoms of the Constitution are not really their enemies, and liberals who believe in infinite race-baiting in service of amassing more and more power to themselves—far beyond the limits of the Constitution—are not really their champions.

New York Times reporter Maggie Haberman posted on Twitter that Donald Trump is telling his closest supporters that he may be reinstated as president in August. That is how fast he believes the walls are closing in on the radical leftists. Election fraud is being exposed, like in the election audit in Arizona, and people are getting fed up with corruption, like the truth we are learning about the Wuhan lab leak. Radical leftists are getting desperate—and they are willing to agitate for race war.

My father, Trumpet editor in chief Gerald Flurry, wrote in a 2012 co-worker letter: “Those in the radical left know that they have a huge army of white and mostly nonwhite supporters that they could ignite into race riots and race wars! And they would not hesitate to do so, if it served their purpose. Soon that horrendous reality will explode in America. It was prophesied to happen.” The George Floyd riots from last summer prove he was right about this. Maybe it was not just one color against another, but the radical left exploited a police killing to stir up a violent movement agitating for the abolishment of America’s local police forces and the establishment of a new system—controlled by the radical left.

Biden is not preaching a message about healing and reconciliation. He is stirring up race war. We have to understand why this is. Critical race theory was invented to pit races against each other, but the root cause of this hatred and division goes deeper than critical race theory and all other forms of Marxism.

“Satan and millions of powerful demons have been cast down to Earth (Revelation 12:9-12). Satan knows his time is short and that Christ is about to return,” my father wrote. “He is a master at working on emotions, moods and attitudes. He is in his worst wrath and is stirring all this race hatred to tear the American superpower to pieces. Most people will never accept this truth until they are in the worst suffering ever on this Earth. That is because they don’t know God—and they don’t know the devil! All this bad news is a sign of the imminent coming of Christ, the best news we could hear!” (ibid).

The Bible prophesies that America’s cities are going to burn with fire. This is a punishment for sin (Isaiah 1:7; Ezekiel 5:1-4). The type of burning we have already witnessed may drive more and more Americans to Donald Trump and the Republican Party. But the only real solution is for people to repent toward God!

Request your free copy of Ezekiel—The End-Time Prophet for a detailed explanation of the Bible’s prophecies about the terrorism and race riots that will beset America just before the return of Jesus Christ.