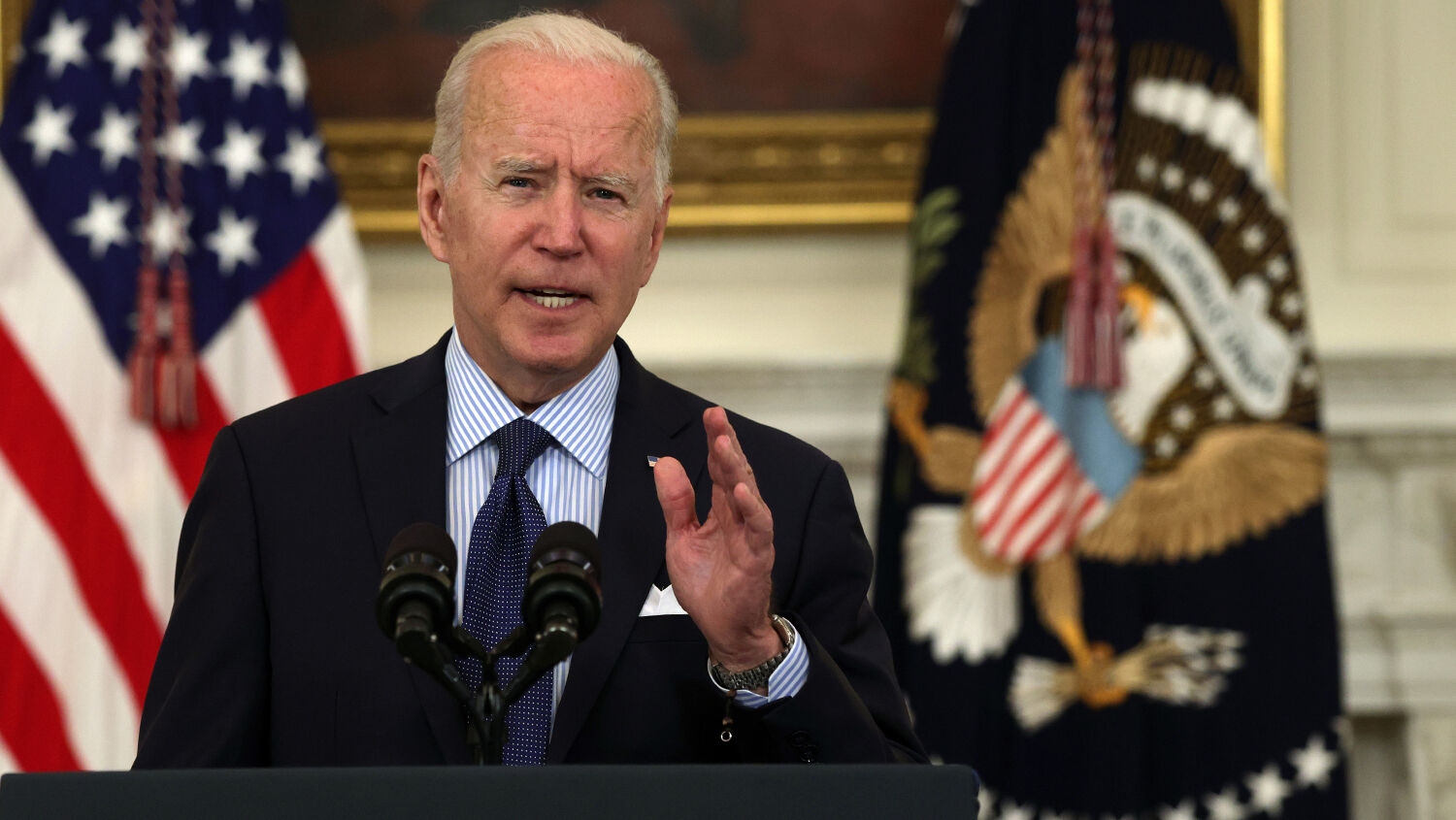 U.S. President Joe Biden delivers remarks on the covid-19 response and the vaccination program during an event at the State Dining Room of the White House May 4 in Washington, D.C.
Alex Wong/Getty Images

The government is taking a somewhat standard flu epidemic and manipulating it to expand its power.

By Stephen Flurry • May 6

Now that 147 million Americans have been vaccinated, public interest in the covid-19 vaccine is sharply declining. So the Biden administration is looking for new ways to pressure 80 million more reluctant Americans into getting their shots.

“Now we are going to have to bring the vaccine to people who are less eager,” Joe Biden said on Tuesday. “So, we also know that there are millions of Americans who just need a little bit of encouragement to get the shot.”

What’s coming right now is the Biden administration calling on businesses to offer paid time off to employees who get vaccinated and giving away tax credits to reimburse these businesses with taxpayer dollars for the associated costs. The government also started airing television ads in English and Spanish telling people to get vaccinated. Biden said the government is even helping launch merchandise discounts and ticket giveaways with major sports leagues and is getting involved with businesses like grocery stores to provide special discounts to shoppers who get vaccinated in their shops. Yes, you now live in a world where the federal government is literally mixing mass experimental vaccination coercion with $5 off your next in-store purchase at Target.

The government is also considering making vaccination mandatory for U.S. troops. (This requires direct presidential intervention, since the U.S. Food and Drug Administration has given the covid-19 vaccines only its emergency use authorization and not its full approval.)

Functioning pretty much as part of the government, or more specifically, the Democratic Party, the propaganda media is also pushing against the “less eager.” Morning talk show host Sunny Hostin took the authoritarian approach and urged people to shun and “cancel” people who refuse vaccinations, specifically white evangelicals and Republicans. Demands like these are dangerously totalitarian!

Meanwhile Dr. Frederic Bertley has been airing commercials telling people: “There’s a lot of misinformation about what’s inside the covid-19 vaccine. Truth is, there’s just a few simple ingredients: water, sugar, salt, fat and, most importantly, the building blocks for proteins that teach your body how to recognize and fight covid-19. That’s less stuff than a candy bar or a can of pop.”

Bertley’s portrayal of the vaccine as basically an all-natural remedy you would be a lunatic not to take is outright misinformation. According to Hackensack Meridian Health, both the Pfizer-BioNTech and the Moderna vaccines do contain water, a bit of sugar to help molecules maintain their shape if the vaccine is frozen, and a few different types of salts to help balance the acidity in your body. But the fats these vaccines contain include polyethylene glycol, a PEGylated lipid known to cause skin rashes, nausea, vomiting, difficulty breathing and shock. And the “building blocks from protein” are experimental messenger ribonucleic acids that hijack a cell’s protein-making machinery and make it produce the spike protein (the protein that gives coronavirus its sun-like appearance).

There is a reason even the U.S. government’s own Centers for Disease Control and Prevention posts warnings on its website notifying you that each of the big three vaccines currently in use are “unapproved” and that “there is no fda-approved vaccine to prevent covid-19.”

Meanwhile, the cdc says that it has received reports of 3,544 deaths linked to an allergic reaction to a covid-19 vaccine.

Watch the news closely and ask yourself: Is this truly giving me both sides, or is it functioning as propaganda?

“Most vaccines have side effects and covid vaccines are no different,” writes Veenu Manoharan for The Conversation. “The public are being reassured that if they experience a sore arm where the needle went in, or tiredness, a headache, fever or nausea, these are merely signs that the immune system is working as it should. This has left some people wondering: if that’s the immune system doing what it’s supposed to do, does a lack of side effects mean my immune system hasn’t been primed to protect me? Rest assured, it means no such thing. The vaccine clinical trials conducted by Pfizer show that 50 percent of the participants did not experience significant side effects during the trial, yet 90 percent of the participants developed immunity against the virus.”

Are you following the warped logic? Despite claims to the contrary, scientists still have no real idea what will be the medium- and long-term unintended consequences of injecting people with these hastily developed, “emergency use” vaccines, especially the ones involving altered messenger ribonucleic acids that are, for all intents and purposes, experimental.

“There is a race to get the public vaccinated,” Tal Brosh, head of the Infectious Disease Unit at Samson Assuta Ashdod Hospital, admitted to the Jerusalem Post, “so we are willing to take more risks” (Nov. 17, 2020).

The warped logic seems to be this: Use the same deceitful techniques that were used for the “two weeks to stop the spread,” “mask up,” and “submit to lockdown” campaigns. Rush out an experimental vaccine, do not subject it to the time and testing required for full approval by the Food and Drug Administration, spend large amounts of deficit taxpayer dollars, publicly shame people, attack their incomes, kick them out of restaurants and off planes, deny them access to public places without vaccine passports, and apply other governmental and propaganda pressure to push both the willing and the “less eager” to get injected.

Bill Nye, a mechanical engineer known for his role as a television science presenter, recently criticized Americans who refused to jab themselves with polyethylene glycol and ribonucleic acids, saying “it’s not fair to everybody else if you become an incubator for a variant.” Last week, Connecticut became the sixth state to remove religious exemptions for immunizations at schools in preparation for making covid-19 vaccines mandatory for school-age children (covid-19 vaccines that are still “emergency use only”).

America is becoming unrecognizable. It has even deployed National Guard troops on missions to help millions of Americans inject themselves with rapidly developed, rapidly approved, emergency-authorized vaccines that are still partially under trial. This is not just the government doing its best with a bad situation. This is the government taking a fairly standard flu epidemic and manipulating it to expand its power and prepare for even greater manipulation. Even when doing so could already be killing some people.

In America Under Attack, my father emphasizes that the Obama administration’s habit of forcing its will on the American people was inspired by the same evil spirit that has animated other authoritarians, particularly the ancient king Antiochus Epiphanes.

“This government is showing its tendency more and more to force its will on the public,” he writes. “It passed its health-care plan even though most of the people said they didn’t want it, and not one Republican voted for it. It made all its decisions behind closed doors, and assured us, Don’t worry—we’ll take care of it. We know what’s good for you.”

That chilling statement gets to the heart of the issue America is dealing with today. The Biden administration made covid-19 vaccines freely available. Only 45 percent of Americans chose to get injected. Now the radical left is looking for more and more ways to force people to get vaccinated—or else!