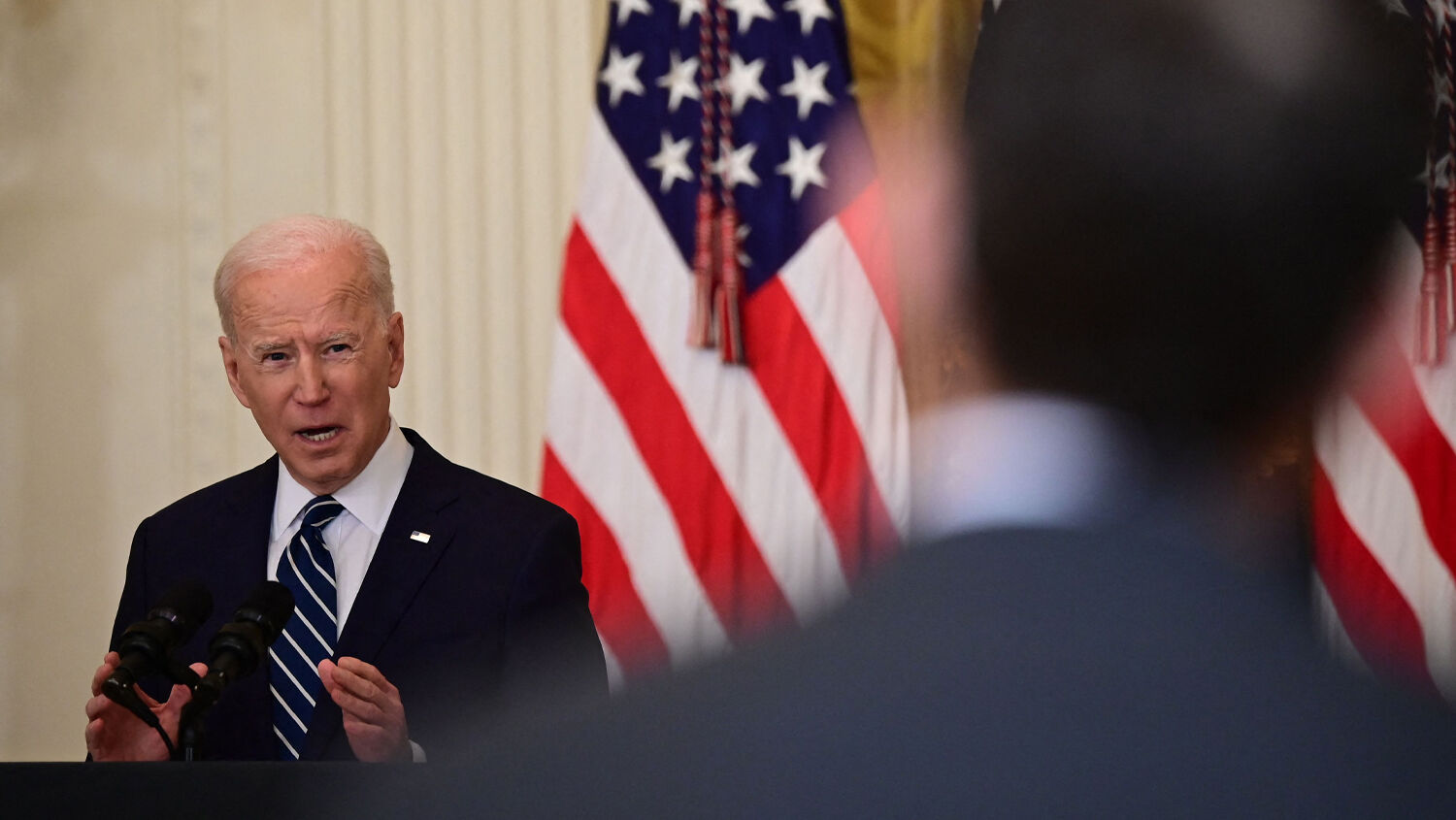 U.S. President Joe Biden answers a question during his first press briefing in the East Room of the White House in Washington, DC, on March 25, 2021.
JIM WATSON/AFP via Getty Images

The humanitarian crisis on the southern border has gotten so bad that federal employees want Donald Trump to intervene.

“Transparency” apparently means barring reporters from photographing or videoing events at the southern border and even blocking United States senators from documenting conditions in holding facilities.

The situation at the southern border has been a crisis for decades. Successive congresses and presidents have used it in different ways for different purposes but have all failed to solve it with good laws and good enforcement—or they have intentionally avoided solving it. But those in the Obama-Biden administration and now Obama’s Biden-Harris administration are intentionally breaking the border wide open.

One of Biden’s first priorities was to undo the immigration policies of President Donald Trump. On his first afternoon in the White House, he reinstated an Obama executive order allowing illegal immigrants to stay if they arrived as children, and, of course, ordered construction on the border wall to halt. Other Obama-style measures have been taken.

The obvious result is that tens of thousands of migrants have started heading toward America. And it appears that border agents have been told to let them in.

Border agents apprehended 100,000 migrants last month, and detention centers are way over capacity. One Customs and Border Protection facility in Donna, Texas, reached 729 percent of its pandemic capacity as more than 1,800 children were packed into a facility designed to hold 250. Yet we do not know the full extent of the migrant surge on America’s southern border, because the “transparent” Biden-Harris administration refuses to let reporters see its detention centers.

When asked about the escalating border crisis, White House Press Secretary Jen Psaki downplayed the situation, saying, “We’ve dealt with this before. It is often seasonal. It is often cyclical. And he [Biden] just wanted to convey that in his effort to communicate and be—provide educational information to the public.”

In other words, Psaki is saying that there is a surge in illegal immigration every spring, so there is nothing to worry about. The propaganda media seems to largely accept and repeat this story line and ignore any connection to the Obama-style policies signed by Joe Biden.

Yet when President Donald Trump was dealing with a much less severe migrant crisis and trying to actually solve it with legal and physical walls against illegal migration and access points for legal migration, the propaganda media compared these same detention facilities to Nazi concentration camps and splashed “children in cages” accusations and photos all over the news.

Yet media executives are now shielding Biden from responsibility for a crisis that is undeniably worse and undeniably a result of his radical policy changes.

The liberals’ brazen expectation that you accept this obvious double standard is shocking! When a reporter asked Joe Biden if he would commit to transparency at the U.S.-Mexico border, he said, “I will commit to transparency when my plan, very shortly, is underway to let you have access to not just them but to other facilities as well.” How long does the world have to wait for that transparency? He would not say.

Apparently, he has to clean up the crime scene before he can allow anyone in the media to see it.

Yet even though the media was kept out, Sen. James Lankford was able to visit a border facility in Arizona. “Ten days ago, I was in Arizona to be able to see the stoppage of the wall at that spot,” he said on March 25. “Here is what happened. On January 20, they turned off all the technology installations over there. What my Democrat colleagues have said is that we just need technology, not a wall, not a fence. That day on January 20 they were doing preparation to lay down ground sensors, install cameras, and install lights across the border. All of that stopped on January 20.”

So, the Biden-Harris administration not only stopped building the border wall on Day 1, they also stopped installing security technology. They basically opened America’s doors to illegal immigrants and said, Welcome to America.

This makes sense when you consider that one migrant camp was spotted flying a Biden presidential campaign flag. To the radical left, the border crisis is a giant, thinly veiled voter drive.

“What remains in Arizona right now is a fence without gates,” Senator Lankford continued. “Literally, the gates were the only thing left to install, so we have miles and miles of fence on our southern border, right next to a town of 450,000 people in Mexico with no gates. There is no reason, except one, why you would install a wall with open gates and no technology: You want an open border. There is no other explanation, and the cartels clearly understand that as well.”

The administration and liberals want to frame their opening of the border as compassionate, righteous and noble. But look at the facts: It is craven, political, self-serving and ruthless!

They are responding to the current executive orders as predictably as they did when Obama was signing them. Tens of thousands more are giving up what little they have in exchange for putting themselves and their children in the hands of cartel smugglers and gang members who promise to bring them and their children on what Obama himself called an “unbelievably dangerous” journey to the border. They face dangerous terrain, hazardous forms of transportation, heat exhaustion, rattlesnakes and their human equivalents and worse sometimes before they even get to the criminal smugglers. Then what do you think criminals who commit theft, robbery, kidnapping, extortion, rape and murder do with this surge of desperate people? Women are being raped. People are being sold into slavery. Cartel bosses are allegedly ordering kidnappings and murders by the dozens. People are dying along the way, drowning in the Rio Grande.

Cartel criminals don’t have noble compassion toward the actual migrants. And neither does this administration! Those leading it are providing incentives for more people, for more children, to risk all of this! For them, the real threat is a Republican or a journalist who documents what is actually occurring.

Like Senator Lankford, Sen. Ted Cruz also tried to inspect the Biden-Harris administration’s detention facilities. But was blocked by a Biden staffer who repeatedly told him, “Please give dignity to the people. Please respect the people, the rules.” Senator Cruz responded that he wants to fix a situation where mothers and children are cramped into small outdoor areas with dirt floors during a pandemic. But the Biden-Harris administration is worried Republican solutions will discourage more immigrants from coming, so it bars people like Cruz from entering.

Last week, Joe Biden held his first and only press conference so far, shortly after putting his quite active vice president, Kamala Harris, in charge of dealing with the border. In it, he actually differed from his own press secretary, who tried to deny that there is a border crisis. He said that a crisis does exist, but it is Donald Trump’s fault. He said that migrants are surging because President Trump canceled $700 million in foreign aid to Central American nations. Speaker of the House Nancy Pelosi made a similar accusation, saying, “The president, then-president, had withdrawn the money that was allocated for the Northern Triangle. That was a mistake, and we have to restore that. They withdrew the money to punish those countries.”

Yet President Trump was not offended. In fact, he agreed with Pelosi.

When Fox News host Laura Ingram played a clip of Pelosi’s statement and asked him if he withdrew the money as a punishment, he said, “Absolutely, that’s right. On that, I agree with her. First time in a long time, years, I have agreed with her. We were paying them $500 million a year. Nobody knew what they were doing with the money, and they were sending criminals to our country. … They abused us in so many different ways.”

Now border agents and others are urging Trump to visit the border and to do something about the crisis, even though he is not in the White House.

“Thousands and thousands of people are coming up right now as we speak, and you could have millions of people pouring into our country, and it’s going to destroy our country,” Trump said in a recent interview. “I don’t know what they are doing, and they don’t know what they are doing. This is a very dangerous situation and I’d love not to be involved, since someone else is supposed to be doing it.”

The Trumpet continues to assert that President Trump will return to power. We do not know how this will unfold, but the border crisis may be part of it. A new Hill-HarrisX poll of 2,858 registered voters estimated that 76 percent of Americans view the border crisis as something that needs to be addressed immediately, but the radical Democrats are not going to do anything about it.

In the long term, the Bible shows that illegal immigration is going to get worse and worse unless Americans repent and turn to God.

Look at the southern border and think about Deuteronomy 28:43, which says, “The sojourner who is among you shall mount above you higher and higher; and you shall come down lower and lower” (Revised Standard Version). This scripture is an end-time prophecy about the United States and Great Britain. (Please request a free copy of The United States and Britain in Prophecy, by Herbert W. Armstrong, for proof.) All you have to do is look around to see that this prophecy is being fulfilled today. Sojourners, strangers, immigrants and aliens are taking over the United States.

Illegal immigrants are coming up from Central and South America by the tens of thousands—some say more than 200,000 per month. And drug cartels are exploiting this crisis to smuggle both drugs and people into America—likely including many from other countries as well who are interested in infiltrating and committing crime and terrorism in this country. The Prophet Isaiah says this crisis will intensify until the nation is destroyed, writing in Isaiah 1:7: “Your country lies desolate, your cities are burned with fire; in your very presence aliens devour your land; it is desolate, as overthrown by aliens” (rsv).

Currently, the sojourners and aliens flooding across America’s southern border are from Central and South America, but Bible prophesy shows that they will soon be joined by hostile illegal migrants from Europe (Isaiah 10:5-7). A future Trump administration will likely try to clamp down on border security, but without God’s help, the current open-border policies being pushed in America will weaken the nation to the point where it can no longer resist a foreign military invasion!