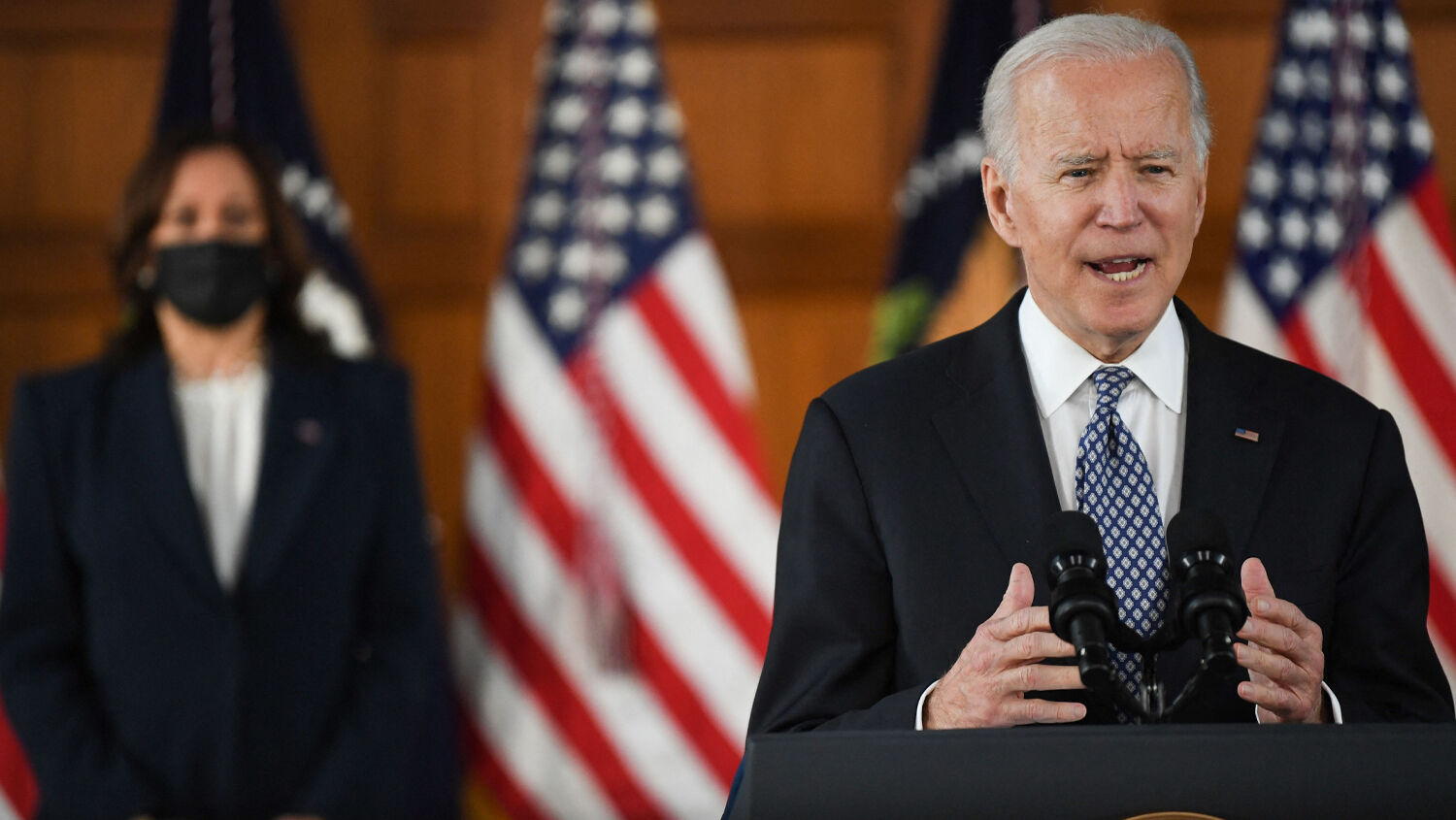 Joe Biden and Kamala Harris are delivering the lines, but the one writing them is Barack Obama.

Last week, Joe Biden slipped three times and fell while walking up the stairs to Air Force One. Photos and videos of the fall are all over the Internet. The White House blamed the wind, but leaders and everyday people around the world are noticing Biden’s declining mental and physical health.

“It’s a national security crisis, because our adversaries around the world—Iran, Russia, Venezuela, China—are watching this,” former Trump adviser Stephen Miller told Fox News. “They are looking at the United States, and its chief representative cannot even get through a simple interview without a cheat sheet and falls down, not once, not twice, but three times going up a flight of stairs. That is sad to watch. … It is extremely serious.”

It’s not just former Trump administration officials like Miller making these claims. Liberal feminist author Naomi Wolf has also expressed alarm at Biden’s current state of health. “As Americans, we would be remiss not to notice that this is a man who is struggling physically, and our national security kind of depends on our being grown-ups,” she said in an interview with Steve Malzberg. “When a very elderly president is struggling physically, it’s an important national security concern ….”

On the presidential campaign trail, Biden mocked President Donald Trump for slowly walking up and down ramps on some occasions, saying, “Look at how he steps, and look how I step. Watch how I run up ramps, and he stumbles down ramps.” Yet now Biden’s Air Force One fall is drawing the world’s attention to his physical gaffes—but they are nothing compared to his mental gaffes.

A United States president is breaking down before our eyes!

In October, he accidentally said, “We have put together, I think, the most extensive and inclusive voter fraud organization in the history of American politics.” On November 3, Biden introduced a crowd to his granddaughter, but referred to her as his son. On March 8, he forgot the name of Secretary of Defense Lloyd Austin, calling him “the guy who runs that outfit,” a reference to the entire United States military. On March 18, he referred to Vice President Kamala Harris as “President Harris.”

Anyone who speaks often publicly makes mistakes, but Biden’s extensive history of misquoted statistics, offensive comments, misstatements and telltale bewilderment is ongoing. Despite the fact that he was aggressively shielded from the public and especially from challenging questions while campaigning to become president of the United States—and now that he has been sworn in as president of the United States—he has still made blatant, public mistakes that are causing people to question not only whether he has the mental capability to lead the free world or the United States, but whether he has the mental capacity to lead his party or even his administration.

People are wondering who is really in charge.

Harris is likely the real power in the White House.

“The capacity of our commander-in-chief is a vital public issue,” political commentator Steve Hilton told Fox News after Biden referred to “President Harris.” “It’s not just this gaffe. There is one of these almost every day where he seems to forget where he is or what he’s doing. He stumbles and mumbles. He clearly, at the very least, doesn’t have the energy to do the job. But more seriously, on a substantive basis, you only have to look at the agenda that’s being pursued to see that Joe Biden is president in name only.”

The fact that Harris has spoken independently to at least six foreign leaders shows that heads of government around the world—and those at home who actually hold power over this administration—do not take Biden seriously. He is not running the country—or the presidency!

Instead, you should look closely at a woman who quit the presidential race 11 months before the election in sixth place among Democrats with support from only 2 percent of Americans. She had peaked at 15 percent—by painting as mildly racist the debate candidate who was standing next to her: Joe Biden.

Investigative journalist Lee Smith reported in November 2020 that Harris would likely be a tool of Barack Obama to run the White House from behind the scenes. “In political circles, it was no secret that Obama had thrown his support behind Kamala Harris,” he wrote in “Behind the Scenes, Obama Never Left.” “She’s ambitious and appealing and, without any strong ideas or opinions of her own, poses no threat to him. She was Obama’s ideal heir, but primary voters found her fake and unlikeable, and she was out of the race in early December. He’d find a way to restore her, but, in the meantime, needed a horse to ride through the primaries.”

Smith is inferring that Obama pressured Biden into choosing Harris as his running mate. This would enable Obama to seize the presidency through his apparently weak and controllable former vice president, then make Harris the real power to implement his radical agenda.

Harris is taking on more presidential duties as Biden’s health declines, and Obama is influencing policy behind the scenes. This is surely the reason Barack Obama never left Washington, D.C., the only modern president to do so besides Woodrow Wilson, who had suffered a stroke. Obama never gave up his agenda.

White House Press Secretary Jen Psaki told reporters on March 22 that Barack Obama and Joe Biden “are not just president and vice president. They are friends and they consult and talk about a range of issues.” She did not know exactly how many times these two men have spoken since Inauguration Day, but mentioned that “our teams are in regular touch about a range of issues.” That statement is extremely revealing!

Apparently, Obama has a whole team of people working for him that are distinct from Joe Biden’s team. What is his team? Is it like a second White House staff? Given Biden’s declining mental and physical health, it is not a stretch to say that Obama probably wields more influence in the Biden administration than Biden himself.

This is the type of arrangement Obama told comedian Stephen Colbert he wanted last year. “People would ask me, knowing what you know now, do you wish you had a third term?” Obama said. “And I used to say, if I could make an arrangement where I had a stand-in, a front-man or front-woman, and they had an earpiece in and I was in my basement with my sweats looking through the stuff and I could deliver the lines, but somebody else was doing all the talking and ceremony, I would be fine with that, because I found the work fascinating.”

People will say that’s a joke for a comedian, but do you think Obama hasn’t been manipulating things in the four years since he left office?

Biden and Harris are speaking the lines, but Obama and his team are the ones determining what those lines are. They have hijacked the government for the purpose of “fundamentally transforming the United States of America,” as Obama said prior to being elected in 2008.

Perhaps the clearest description of this hijacking appears in Daniel 8. Verses 9-12 describe an evil spiritual force to whom “an host was given … by reason of transgression [that is, God permits this because of the sins of the people], and it cast down the truth to the ground; and it practised, and prospered.”

Strong’s Concordance defines “host” as a mass of persons, especially one organized for war. It can refer to an army of demons, angels or men. Here it refers to demons and men who help cast truth to the ground.

As my father explains in America Under Attack, Barack Obama is a modern-day type of Antiochus Epiphanes, a wicked king who obtained the throne through lies. Then he betrayed the people of Judah, who were under his rule, slaughtered them, and desecrated the temple in Jerusalem with an idol of himself.

Although news about Obama went mostly silent after he left office, we at the Trumpet have kept an eye on him. In the February issue, my father wrote that Obama was the “at the epicenter of the election crisis and the radical left’s effort to prevent Donald Trump from being reelected!” He based his analysis on 2 Kings 14:23-29, which describes a Satan-led movement in the end time to “blot out the name of Israel from under heaven,” and Daniel 8:12, which exposes an end-time Antiochus who “cast down the truth to the ground,” as well as Revelation 12:9, which reveals that God has cast Satan down to Earth.

We are currently getting a clear look at Antiochus’s agenda. Radical leftists have taken off the mask, and God is exposing their full corruption. When people do not deeply love truth, they eventually come to believe lies (2 Thessalonians 2:9-12). Americans have allowed this sinful condition to worsen to the point where our presidency itself is a lie.