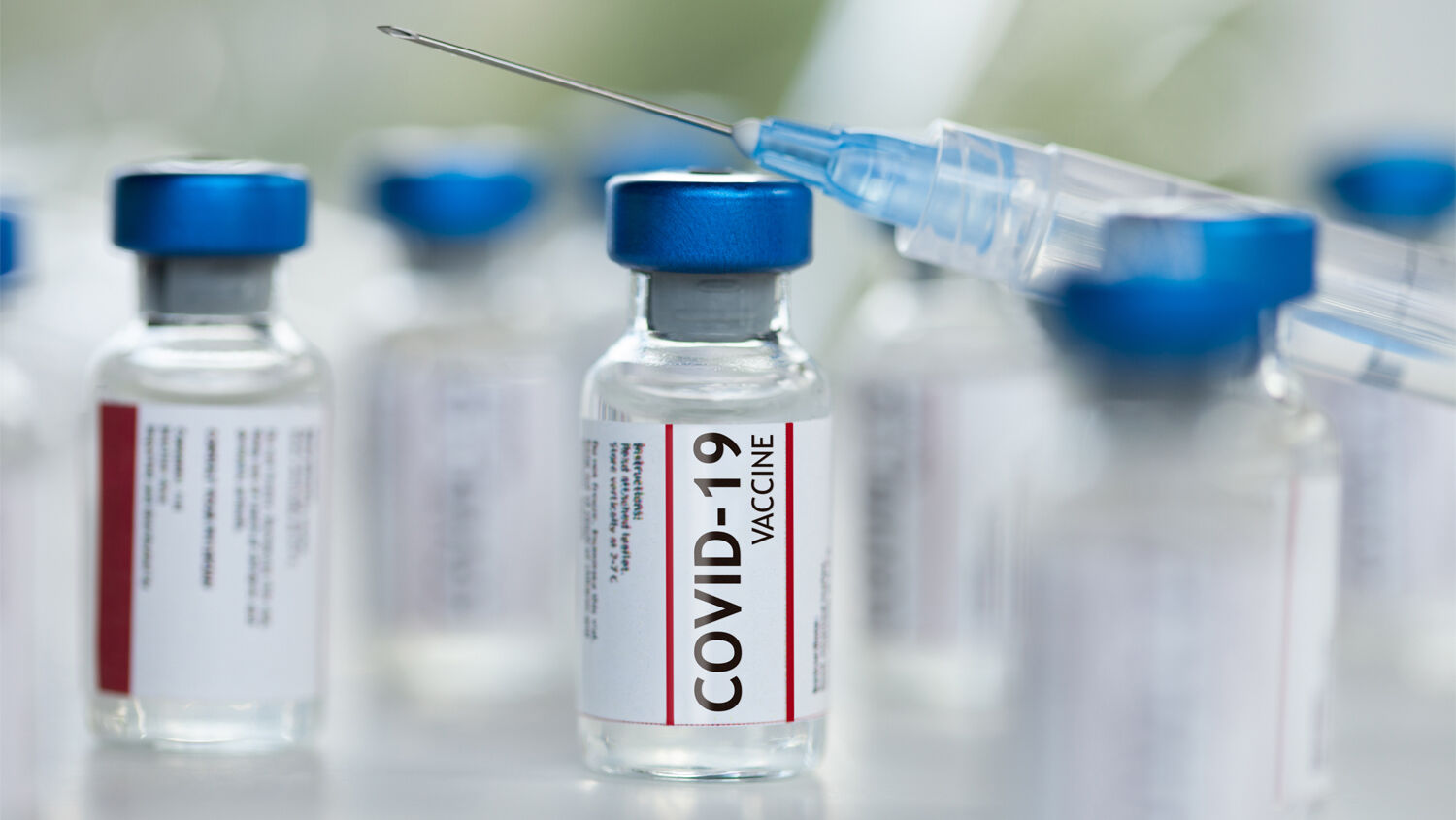 One poison plus one more poison equals … no poison?

Joe Biden has given his first speech since entering the White House. In it, he took credit for President Donald Trump’s coronavirus vaccination plan—while accusing President Trump of doing nothing in response to coronavirus—and said that if Americans are well behaved, he might benevolently allow them to celebrate Independence Day in small groups.

The propaganda media loved this speech!

msnbc analyst David Corn called the address “the speech that Donald Trump refused to give.” Washington Post contributor Jennifer Rubin praised it as being “a sober, sometimes poetic and hopeful speech mixed with Biden’s telltale expressions of empathy and sorrow for the losses we have suffered.”

Biden gave this speech on March 11, the one-year anniversary of governmental coronavirus lockdowns, as if to celebrate the central government’s unprecedented shutdown of America. He recounted how countless Americans lost their jobs, lost their businesses, lost their homes; how a generation of children was set back a year because of school closures; and how weddings, graduations and family reunions were canceled because of governmental lockdowns. But this was not an admission that the government is wildly exaggerating the actual danger. It was not an admission that the government is mishandling and intentionally manipulating the people for reasons that have nothing to do with a comparatively minor epidemic. This was not an admission that few to none of these lockdowns would have happened if his own political party had not aggressively pushed for them against Republican opposition.

Instead, it was praise for the lockdowns, punctuated by the sanctimonious statement that if every American obeys Dr. Anthony Fauci, masks up, gets tested and gets vaccinated, then maybe the government will let them enjoy a barbecue with their families on—ironically—Independence Day.

Liberals have been shaming Americans into wearing a mask, then two masks, standing like robots on floor markers 6 feet away from each other, staying inside their homes, giving up their businesses and incomes, and sacrificing their constitutional rights. Now they are using the same tactics to pressure you and me to get an untested, dangerous coronavirus vaccine.

“Now because of all the work we’ve done, we’ll have enough vaccine supply for all adults in America by the end of May. That’s months ahead of schedule,” Biden said. “And we’re mobilizing thousands of vaccinators to put the vaccine in one’s arm. [We are] calling on active-duty military, fema, retired doctors and nurses, administrators, and those to administer the shots. And we’ve been creating more places to get the shots. We’ve made it possible for you to get a vaccine at any one of nearly 10,000 pharmacies across the country, just like you get your flu shot.”

Four former American presidents have encouraged Americans to get injected: Barack Obama, George Bush, Bill Clinton and Jimmy Carter. That is every living former president, except Donald Trump. Yet neither they nor others who are pushing these injections urge caution or say much of anything regarding their effectiveness—or their dangerous side effects.

It would be illogical to think that a hurriedly developed, hurriedly approved, heavily politicized, potentially hugely profitable injection with vaguely defined contents wouldn’t be potentially dangerous. Especially if it is being distributed on an emergency basis and especially if the disease it is supposed to “cure” is anywhere near as dangerous as we’ve been told.

But the government is pushing it, the liberal chorus is shaming people into it, and people are taking it.

People like writer and actor Ben Stein, who said, “I had the covid booster by Moderna four or five days ago, and I am still feeling wild side effects from it—like I have the worst flu in the world, extreme shortness of breath, dizziness, fatigue, extreme irrational thinking. And it has just been devastating. … This booster is a killer. It’s not going to kill you literally, but it is very, very strong. Beware.”

People like Kassidi Kurill. Her father said she was “healthy and good, then she took the shot.” The 39-year-old got her second dose of the Moderna covid-19 vaccine, began feeling poorly, was bedridden for two days, and asked her father to drive her to the emergency room. Doctors told him that her liver had stopped functioning. Before they could do anything further, her kidneys and heart stopped functioning. A kutv investigation found that three other Utah families have reported vaccine-related deaths to the Centers for Disease Control and Prevention’s Vaccine Adverse Event Reporting System. There have been other scattered reports of vaccines apparently killing people, including miscarriages and stillbirths, in the U.S., Canada, Norway, Portugal, Italy and elsewhere. More than 20 countries have revoked their authorizations for the distribution of certain covid vaccines (while permitting and promoting others).

Yet experts like Utah’s chief medical examiner say that proving a vaccine as a cause of death almost never happens. Is that because a vaccine almost never causes death, or could there be other reasons? The interests of powerful pharmaceutical companies, the medical industry and big government, perhaps? Life insurance companies have their own interests too, and there are reports that due to the vaccines’ obviously experimental nature, they may not cover people who have been injected with it—whether the government acknowledges that as their cause of death or not—because it might be their cause of death.

This is the world you live in: Central governments are using agents and active-duty troops to inject people with a rapidly developed, rapidly approved, clearly dangerous, experimental, emergency vaccine.

This is not just the government doing its best with a bad situation. This is the government taking a fairly standard flu epidemic and manipulating it to expand its power and prepare for even greater manipulation—even with these consequences.

People are largely accepting what they are told, many are getting their injections, and some are dying.

Governments including the U.S. count anyone who died 28 to 60 days after having a positive covid-19 test as a covid death. That discounts the fact that many of the tests produce false-positives (including some people who signed up to take the test, never actually took it, then are told that they tested positive for covid). The government and media’s ominous “covid death” tickers literally include people who die from other causes as obvious as gunshot wounds. (Examples here, here and here.)

The government counts anyone who died with a positive covid test result as a “covid death.” They reject people who say that dying with covid is far different from dying from covid. They reject people who say that you have to put the death in context, look for complicating factors, realize that many who get tested are more at risk of death in the first place, realize that there are thousands of deaths from all causes every day in the United Sates, realize that many who die after a positive test result actually died from other causes, realize that they died with covid (if the test was right) but did not die from it.

Kit Knightly at OffGuardian, who brought this out, noted the bias apparent in the headlines: “Pfizer COVID Vaccine Probably Didn’t Kill Woman, 78, Who Died Shortly After Having It,” “Woman Dies From Brain Hemorrhage in Japan Days After Vaccine, but Link Uncertain,” “Macomb County Man, 90, Dies After COVID-19 Vaccine—but Doctors Say Shots Are Safe.” Knightly quoted a doctor and abc News contributor who talks about “spurious relationships” and says that sickness and death occurring “in proximity” to something does not necessarily prove that the thing caused the sickness and death. He is right, of course, that something happening before something else is often not its cause. But is he talking about being accurate with covid death counts? No, he’s helping the abc “fact-checkers” reduce the number of covid vaccine death counts.

Knightly also cited a Good Morning Britain interview with Dr. Nighat Arif who admits that there is technically always a 0.1 percent risk that the average person will get a blood clot. “If you’re on a flight, your risk of clot increases. If women are on the contraceptive pill, their risk of clot increases; people going to the hospital for surgery. However, we don’t stop doing any of those things.”

“The doctor is actually arguing that refusing to live your life based on a 0.1 percent risk of death is foolish and that nobody should be expected to do that,” Knightly wrote. “It is, literally, word for word a ‘covid skeptic’ argument, reproduced in the mainstream, without even the tiniest hint of irony or self-awareness.” These “experts” have “a deliberately employed double standard, and that is a tacit admission of intentional deception.”

Meanwhile, people are getting infected, suffering and dying from the covid-19 vaccine. Joe Biden’s plan to vaccinate every American makes as much sense as deliberately infecting every American with the coronavirus itself. Tens of thousands will likely die if the Democrats go through with this insane plan. And once the government grabs that much power over people’s rights, including their health, it won’t give it up.

Now is a good time to be thinking about health. It is a good time to be thinking about where you put your trust for health and healing. We all put our trust in something. The average person’s lack of reaction to what is happening with covid shows that most of us put our trust in the medical establishment to a large degree. Even when that medical establishment is inherently limited to what human beings can scientifically discover, even when what it discovers is then discovered to be wrong only years or months later, even when advancements in science are constantly outpaced by advancements in disease, even when the medical method of “healing” is not to return the body to its natural state but to make it even less natural with chemicals and scalpels, even when much of the medical industry has nothing to do with science or healing at all and has everything to do with the profit margins for pharmaceutical stockholders and the political agenda of politicians.

When it comes to your health, your body, your life, you really do need to understand the truth. The truth is that physical, biological laws exist. Obeying them, to your advantage, causes the effect of good health. Breaking them, whether by accidentally cutting your finger or injecting chemicals including synthetic mrna into your arm, causes the effect of poor health.

Herbert W. Armstrong wrote in The Plain Truth About Healing that the medical industry has “operated primarily on that method—trying, with medicines, to prevent God’s law from exacting its penalty. That theory says, in effect, we can transgress God’s law and then prevent God’s law from exacting its penalty. The theory is: The sufferer has in his body one poison, so we add another poison in the form of medicine. And one poison plus one more poison equals NO poison!”

The monstrosity that is the covid-19 vaccine rollout is a full expression of this distorted theory. It is amazing the lengths human beings will go to in order to “cure” themselves, so long as they can avoid submitting to the laws of the very Creator of human bodies and minds.

God’s arithmetic is one poison minus that one poison equals no poison. And yes, it requires the laws of the Creator and even the intervention of the Creator. If you are interested in trusting and obeying the Creator of human health, I urge you to request a free copy of The Plain Truth About Healing, by Herbert W. Armstrong. Many of us read it every year.