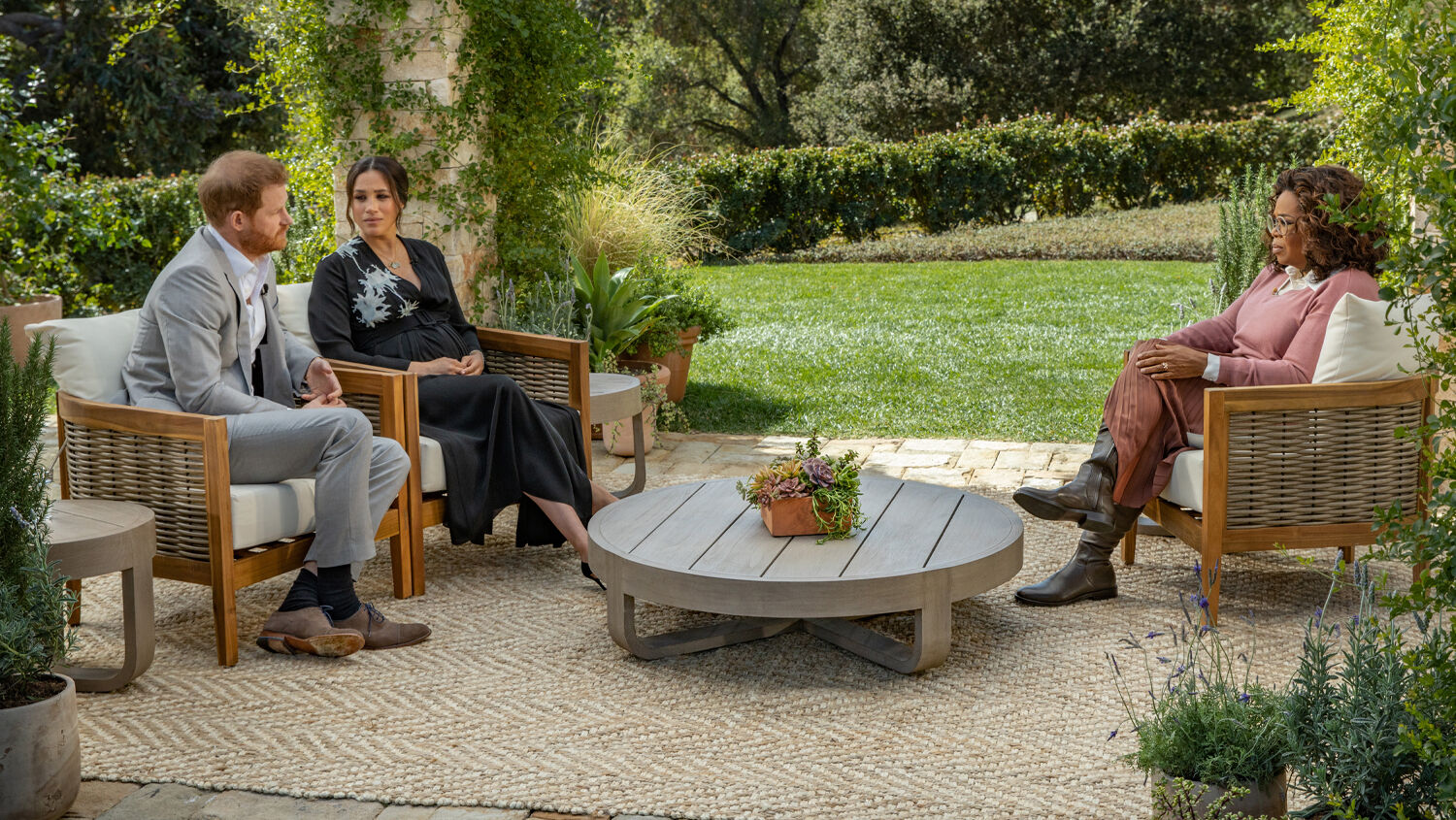 In this handout image provided by Harpo Productions and released on March 5, 2021, Oprah Winfrey interviews Prince Harry and Meghan Markle on A CBS Primetime Special premiering on CBS on March 7, 2021.
Harpo Productions/Joe Pugliese via Getty Images

Racism in the royal family left Meghan, the duchess of Sussex, on the brink of suicide. That’s the impression given by a two-hour interview the duke and duchess held with Oprah Winfrey.

In the interview, which aired last night, the two leveled incendiary accusations against the royal family. The duchess claimed that one unnamed member of the royal family had “several conversations” with Prince Harry about how dark the skin of their first child would be. She indicated that race is the reason why her son, Archie, is not a prince. She said she was distressed by the “idea of the first member of color in this family … not being titled in the same way that other grandchildren would be.”

That accusation is not true. King George v set down the rules of who would be given the title “prince” over 100 years ago—and race plays no role in those rules.

The British media are also racist, the couple hinted. Harry said that one of the “saddest” parts of his experience was that no one in the royal family criticized “the colonial undertones” of Meghan’s coverage in the media.

Again, it’s clearly not true. I think most living in the United Kingdom were like me: We didn’t even know that Meghan was part black until she brought it up. It’s not something the media ever talked about.

But Harry and Meghan claimed that things were so bad it almost killed her. Meghan said she reached the point that “I just didn’t want to be alive anymore.” She went to the royal family for help, she said, but got nothing: “I was told I couldn’t; it wouldn’t be good for the institution.”

Harry said that he was worried she’d end up dead. “My biggest concern was history repeating itself, and I’ve said that before on numerous occasions, very publicly. … And when I’m talking about history repeating itself, I’m talking about my mother,” he said. In fact, Meghan’s situation was worse than Diana’s, apparently. It was “far more dangerous, because then you add race in and you add social media in.”

When I wrote on the royal family last week, some responded asking why the Trumpet would report on such a seemingly gossipy story.

I sympathize with the question. Celebrity gossip is, at best, a waste of time. But the royal family has a much greater importance than actors or pop stars.

Whether they believe it or not, Britain’s family has a history with God. God promised King David that he would always have a descendant ruling over part of the biblical nation of Israel. This promise is behind the extraordinary staying power of Britain’s royal family. In his free book The United States and Britain in Prophecy, Herbert W. Armstrong proved that Britain’s royal family is descended from King David.

What happens around the throne in England matters. Trumpet editor in chief Gerald Flurry wrote: “There is a direct connection between the unrighteousness surrounding David’s throne in England and the death of America and Britain! … Just how important is that throne to us today? Our job is to tell the nations of Israel that they have David’s throne and that their fate is directly tied to the righteousness or unrighteousness of that throne! Ignorance is no excuse.”

Since Mr. Flurry wrote that, God has given important new truth about the throne. Mr. Flurry wrote that this new truth “was a signal of terrible things to come upon Britain, as well as a sharp decline of America and Judah. It was also an indication that we would see a rapid decline in Britain’s royal family.”

We continue to see that “rapid decline” in the latest Oprah documentary.

This subject is critical to learn about. But there’s a much better—and shorter—place to go than the two-hour Oprah video. Trumpet executive editor Stephen Flurry covered this at the start of his Trumpet Daily show today. He played some of the most remarkable clips and combined those with context from the Bible, along with footage from our own shows.

If you’re entirely new to this subject, Mr. Armstrong’s book The United States and Britain in Prophecy will help you prove how important this throne is to God. And our book The New Throne of David will update you with the latest inspirational truth.