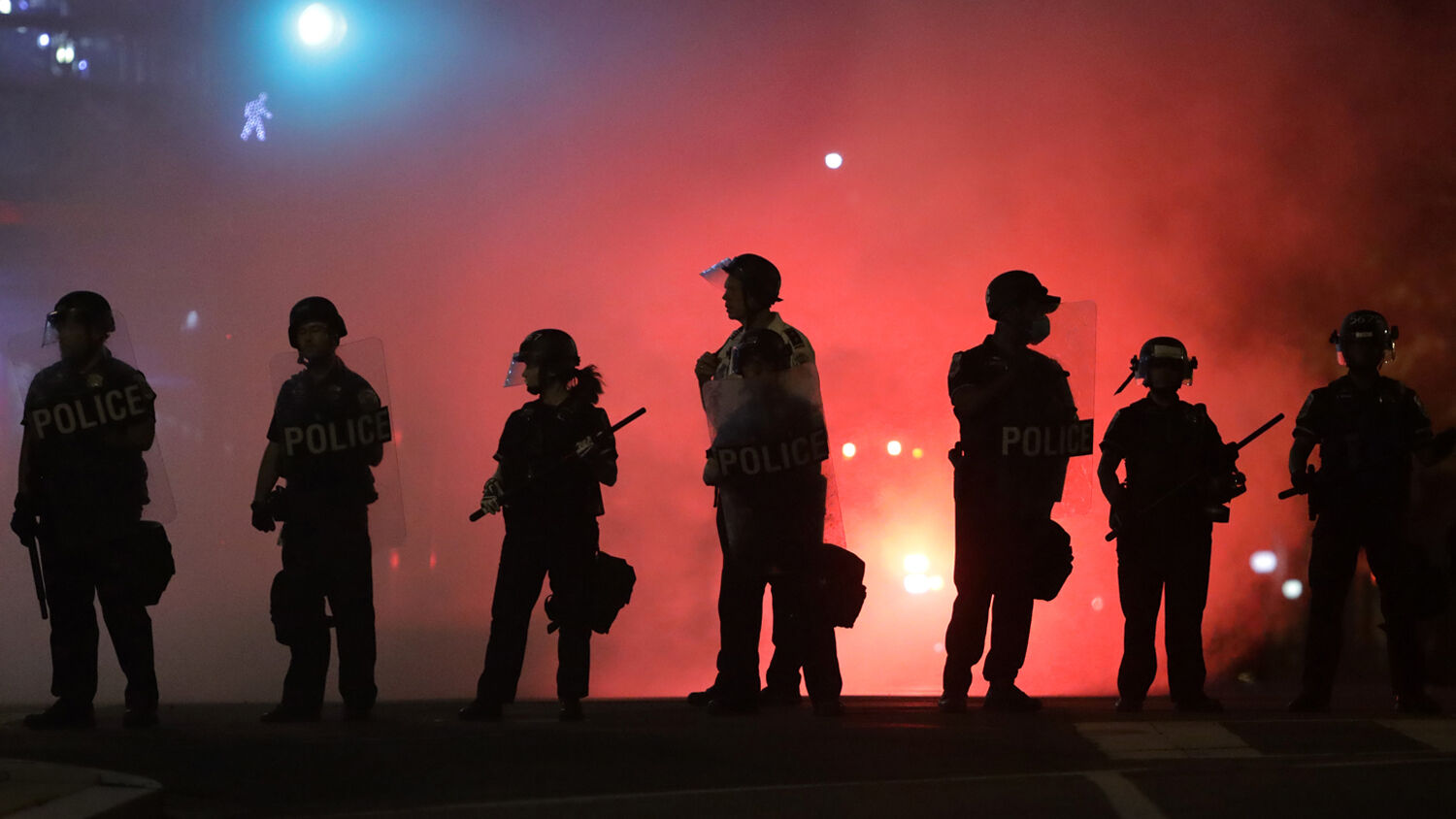 Police hold a perimeter near the White House as demonstrators gather to protest the killing of George Floyd in the morning hours on May 31, 2020, in Washington, D.C.
Alex Wong/Getty Images

2020 saw a “historic” increase in murders, according to data published by the National Commission on covid-19 and Criminal Justice (ccj). After comparing 2020 criminal data for 34 American cities to previous years, they concluded, “Homicide rates were 30 percent higher than in 2019, a historic increase representing 1,268 more deaths in the sample of 34 cities than the year before.” Although the official stats from the federal government are yet to be published, the ccj expects the increase in 2020 will eclipse the previous largest single-year increase of 12.7 percent in 1968. While it was the largest increase recorded, 2020 wasn’t the deadliest year.

The report also found that a number of other violent crimes against other people increased in the sampled cities through 2020: Aggravated assault and gun assault rates in 2020 were 6 percent and 8 percent higher, respectively. Meanwhile, property crime decreased: Residential burglary decreased by 24 percent, non-residential burglary by 7 percent, larceny by 16 percent, and drug offenses by 30 percent. The only property crime that increased was motor vehicle theft, which rose by 13 percent.

2020 was an unprecedented year of lockdowns, fear, riots and political turmoil. Some have used the pandemic to explain the rise in murder rate, citing a strain on police resources with staff out or quarantined because of the pandemic, combined with the stress on residents. Others say it was a combination of the pandemic plus the anti-police riots that took place over the summer. But one thing is certain: The liberal media does not want the public to believe that the 2020 summer riots alone led to the increase.

The data shows a clear, sharp spike in homicide rates after the death of George Floyd in late May, but there is a concerted effort to detach the “peaceful protests” from the increase in violence. The ccj report states (emphasis added):

As noted above, a precipitous rise in homicides coincided with the emergence of mass protests after George Floyd was killed in late May by a police officer in Minneapolis. In June through August 2020, the homicide rate was 37 percent higher than the previous year and higher than during any other period in 2020. That said, the connection between police violence, protests and social unrest, and heightened community violence remains uncertain.

As the authors have noted previously, it may be instructive to compare recent increases in violence to those that followed the August 2014 police killing of Michael Brown in Ferguson, Missouri, and the subsequent protests around the country. In the aftermath, homicides in large cities rose in 2015 and 2016 by nearly 22 percent—the largest two-year increase in 25 years.

Analysts at the time tied the heightened violence to two versions of a so-called Ferguson Effect, both of which remain plausible today. The first connects violence to “de-policing,” a pullback in proactive law enforcement by officers who fear they will be unfairly scrutinized and could lose their jobs. The second connects violence to “de-legitimizing,” positing that disadvantaged communities drew away from police due to breached trust and lost confidence. Reduced reliance on the police impedes crime investigations and increases “street justice” to resolve disputes, resulting in more violence. While it remains unclear how much these theories explain such increases, it is clear that no simple connection exists between police violence, protests against such violence, and community violence.

That is willful blindness to the facts. Yet many hold to that belief. The desire to support a supposed narrative that the police are the problem is so strong that they willfully reason around the truth. The reality is that when police are marginalized and demonized, a pullback is inevitable. And crime thrives in the void left behind.

Other facts suggest the pandemic and lockdowns did not contribute to the added violence. In fact, crime rates fell during the early part of 2020 as people were put into lockdown. One report from the University of Pennsylvania specifically noted, “Some types of serious violent crime seemed unaffected by the pandemic onset, notably homicide and shootings.”

When, then, did this sudden increase in murders begin? Paul Cassell, professor of Criminal Law at the University of Utah, took a more detailed view of the murder rates of major U.S. cities, rather than an aggregated view like the ccj report. In reviewing data for Chicago, Philadelphia, Minneapolis and New York City, he found an explosive increase in the number of homicides at the end of May, following the start of the anti-police riots. In addition, Cassell documented, following the protests there was a severe decline in arrests and police stops. The police pulled back.

Letting the data speak for itself, a clear picture emerges: The pandemic caused a decline in crime in the U.S., but May saw a spike in violence following the anti-police protests, during which the police were pulling back. And this is not a one-off event. Cassell wrote:

The Great 2020 Homicide Spike looks eerily similar to the pattern of crime increases during the 2016 Chicago homicide spike. [I]n 2016, stop-and-frisks fell dramatically in the Windy City following an agreement between Chicago Police and the aclu. And, as a consequence of that agreement, homicides and shootings dramatically increased, while most other crimes did not.

The exact same pattern keeps appearing. Whether it’s the 2020 riots, the 2015 riots, or the 2016 Chicago homicide spike, it always connects back to a pullback in policing. And with President Joe Biden in power, we can expect this trend to continue. Mr. Biden campaigned on the narrative that African-Americans are living in fear of the police. This in spite of the facts from the Washington Post’s police shooting database showing that more unarmed white people were killed by police in 2020 than unarmed blacks. Yet the narrative continues, and so does the violence. As Heather Mac Donald recently pointed out:

Shootings in South Los Angeles rose 742 percent in the first two weeks of the year. In Oakland, homicides were up 500 percent and shootings up 126 percent through January 17. In New York, murders were up 42 percent and shooting victims up 15 percent through January 17. Carjackings, already up 135 percent in Chicago in 2020, are spilling into the city’s suburbs.

America is waging war on its own law enforcement officers, and its cities are suffering as a result. Rather than going after the criminals, the radical left goes after the police. They do all they can to cover for the rioters, even when the facts prove that these protests were the cause of more violence.

For years, the Trumpet has forecast that the violence in America’s cities would get worse, with much of it stemming from racial hatred. In 2015, following the Baltimore riots, Trumpet editor in chief Gerald Flurry wrote:

It would be overstating it to say there is no racism among America’s law enforcement officers. But there are some few people who are scrutinizing and magnifying this issue for evil purposes. They are using it dishonestly to explain or excuse some terrifyingly dangerous behavior. They are stirring up emotion and anger—but none of it is truly intended to solve the problem.

The results are inciting evils that are quickly becoming far worse than those they purport to solve! The nation’s police are being undermined in ways that will prove devastating to our cities in particular.

That devastation is on full display with the ccj report, even if they refuse to see it. Violence is intensifying as police are marginalized and attacked. The facts bear that out. And Bible prophecy shows it will continue to intensify. Police, law and order are under attack in America. This attack is having a devastating effect on the nation. To learn the source of this attack, request your free copy of America Under Attack, by Gerald Flurry.