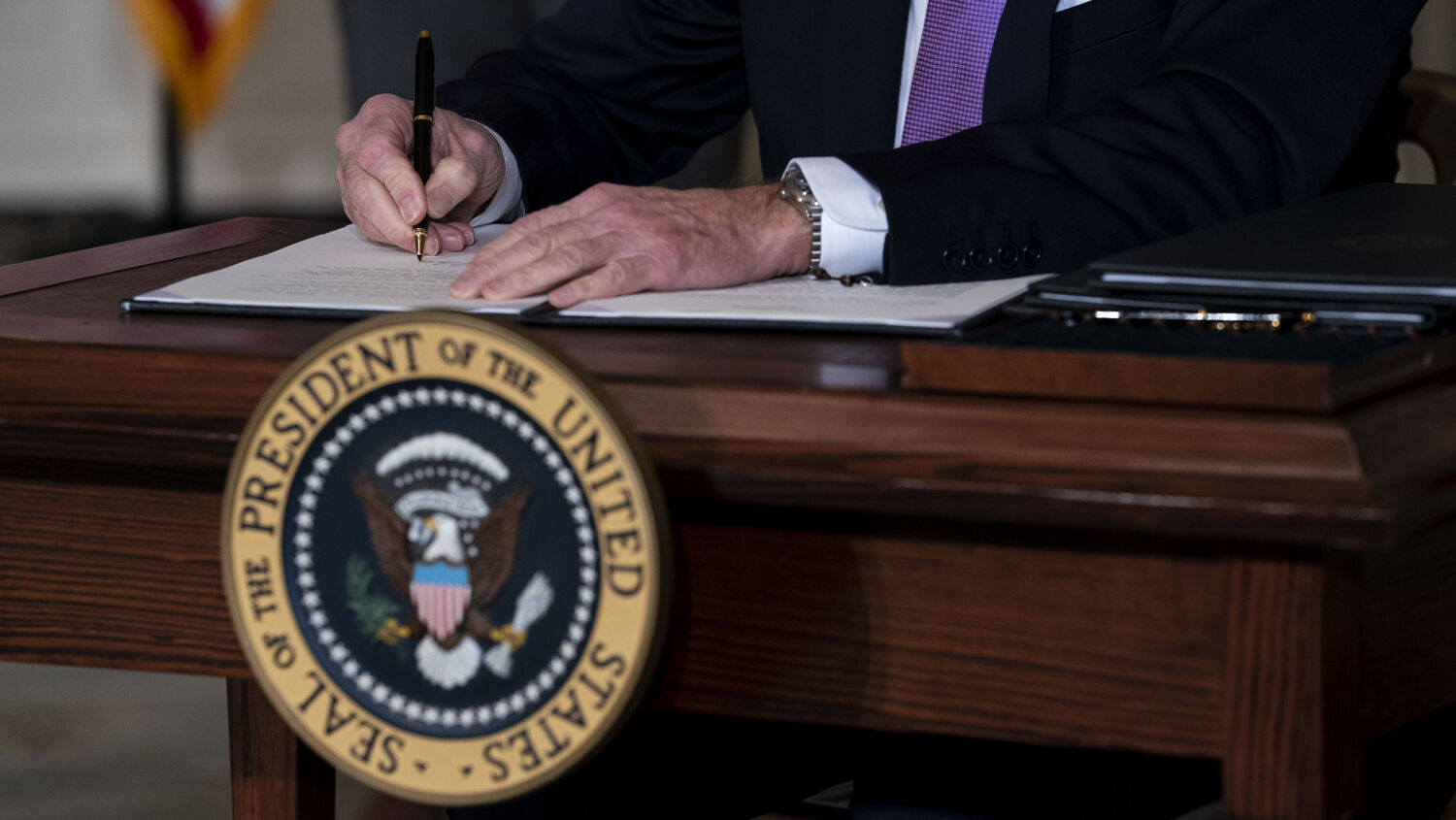 Once again, the radical left accuses its opponents of what it is guilty of doing.

Joe Biden has signed more executive orders during his first two weeks than any other president. He has signed a whopping 28 official executive orders, not counting other executive actions like proclamations and memorandums. Fifteen presidents never signed that many during their entire presidencies. Franklin Roosevelt, a radical progressive in his day, holds the all-time record for executive orders, but it took him almost a month to sign 28.

And these orders are not about minor governmental administrative issues. They are designed to drastically change America itself!

Biden’s onslaught of radical orders is extremely hypocritical. Less than three weeks before the presidential election, he told abc News, “I have this strange notion: We are a democracy. Some of my Republican friends and some of my Democratic friends even occasionally say, ‘Well, if you can’t get the votes, by executive order you’re going to do something.’ [Some] things you can’t do by executive order unless you’re a dictator. We’re a democracy.”

So Biden himself told the nation that you couldn’t legislate by executive order unless you were a dictator. Then he turned around and signed more than 40 executive orders and other actions during his first 14 days in office. President Donald Trump only signed 12 official orders during his first two weeks. Yet again, radical leftists have accused their opponents of exactly what they themselves are guilty of doing!

Executive actions are not always unconstitutional or dictatorial. They exist so that a president can order employees in the executive branch of government to execute laws passed by Congress. But Biden’s orders are enacting new laws and policies by executive fiat. He is literally doing things “you can’t do by executive order unless you’re a dictator.”

During his first afternoon in the White House on January 20, Biden reinstated an Obama-era executive order allowing illegal aliens to stay in America if they arrived here as children. He ordered workers to halt construction of a border wall on the United States-Mexico border. He ordered an end to “harsh and extreme immigration enforcement,” when his very job is to enforce the laws, immigration and otherwise, passed by the people through their representatives in Congress. But Democrats in Congress “can’t get the votes.” Not enough of them—and not enough voters—want to eliminate America’s national borders. So some conversation to the effect of “by executive order, you’re going to do something” has taken place, and Democrats controlling the White House are forcing the border open by executive order.

Biden has ordered the federal government to re-engage with the World Health Organization, despite the fact that this globalist institution helped China cover up the origins of covid-19. He has ordered the federal government to rejoin the Paris Climate Agreement, which mandates that America send money to socialist, Marxist-type governments around the world. Congress approved neither of these measures, and both of them actively harm America’s national sovereignty.

Biden also unilaterally revoked the permit for building the Keystone XL pipeline. This move sabotaged America’s quest for energy independence, made the nation more subject to Arab nations for oil, and eliminated 11,000 well-paying jobs. He also blocked new oil- and gas-leasing on federal lands and waters. Since federal lands account for 13 percent of the nation’s natural gas production, the American Petroleum Institute estimates that this “fracking ban” will result in 1 million job losses by 2022.

Biden also ordered that the government delete the Trump administration’s “1776 Project.” This report was put together under the direction of Hillsdale College President Larry Arnn to restore honesty to the teaching of American history and to show children that the defining fact of America’s founding was not the evil of slavery, as leftist radicals have aggressively taught, but the ideal of freedom. He also repealed a ban on transgender people joining the military, and issued a directive to “combat discrimination” on the basis of sexual orientation or gender identity.

These forceful orders are not just taking Americans back to the way things were before the Trump administration or before the Obama administration. They are plunging us into an unprecedented immediate future so radicalized that we must submit to destroying our own economy, to aiding enemy nations, to pretending that America was founded on hate, to pretending that a man is a woman.

Joe Biden is executive-ordering his way to fulfill Barack Obama’s goal of “fundamentally transforming the United States of America.”

My father wrote a startling booklet in 2012 titled America Under Attack. It revealed that Joe Biden’s boss, Barack Obama, was inspired by the same spirit that has empowered other leaders who have destroyed their own people, particularly the ancient king Antiochus Epiphanes. Antiochus obtained the throne through lies. Then he betrayed the people of Judah, who were his subjects. He slaughtered them, defiled the temple in Jerusalem with an idol of himself, and attempted to fundamentally transform Jewishness itself.

In this booklet, my father draws particular attention to the type of dictatorial executive actions the Obama-Biden administration was enacting. He wrote:

People’s minds are getting conditioned to executive orders—which are primarily intended to circumvent Congress and the Constitution. That is the aim. This is quickly moving us toward rule by a dictatorship or a tyranny.

He highlighted disturbing facts about one area in which the Obama administration forced changes through using executive actions: unconstitutional restrictions on firearms. Meanwhile, Obama was heavily arming the Department of Homeland Security and other executive agencies.

“Why does the government need to be so heavily armed but not the people?” my father wrote. “This government is showing its tendency more and more to force its will on the public. It passed its health-care plan even though most of the people said they didn’t want it, and not one Republican voted for it. Even though the administration had promised to always be transparent, it made all its decisions behind closed doors, and assured us, Don’t worry—we’ll take care of it. We know what’s good for you.”

That chilling statement gets to the heart of the issue!

Barack Obama, Joe Biden and the entire radial-left movement are hijacking the federal government for the purpose of “fundamentally transforming the United States of America”—by brute force. The executive actions we have witnessed over the past two weeks pick up right where Barack Obama left off eight years ago.

Obama was and is a type of Antiochus. But President Trump is a type of King Jeroboam ii, which Bible prophecy says God will yet use to stop those who are trying to blot America out. God is going to use him to save the nation—but temporarily. But many Bible prophecies show that this nation will still soon fall to those who are weakening it from within and those who will destroy from without. So for what purpose is God temporarily saving America?