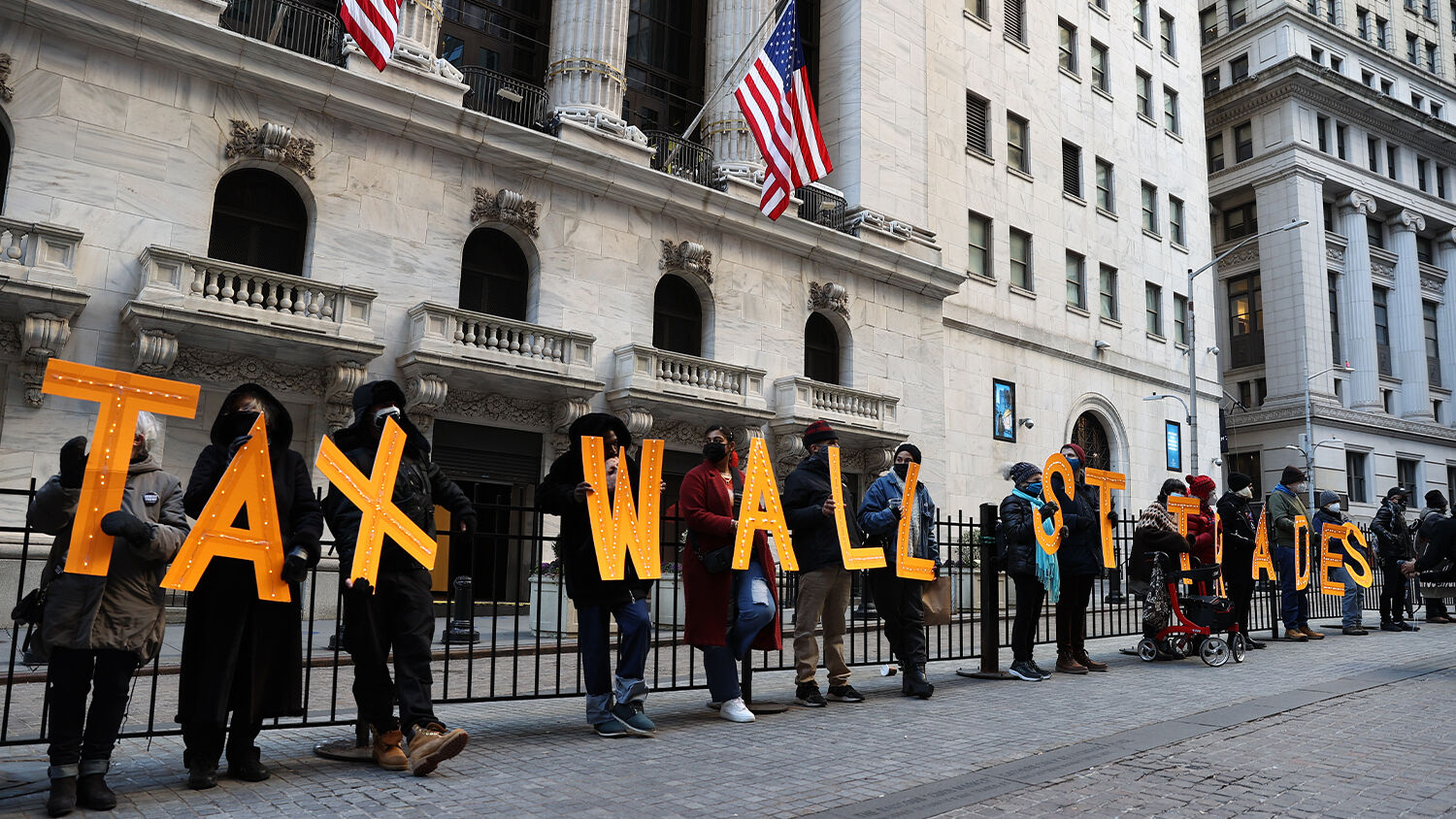 Last week’s financial battle over GameStop was one of the most entertaining news stories in years.

It saw a dying company’s share price go stupidly high. Just six months ago, GameStop shares sold for $4 each. Last week, they came close to $500. A store that sells video games on disks (remember those—they went in the disk drives that used to come built into computers) became a Fortune 500 firm overnight.

It was a morality tale: The little guy we could all root for, taking on the big, evil hedge funds and winning. And, of course, there were the memes.

But there’s more here than just good fun. As entertaining as it was, the GameStop saga teaches us some important lessons about the American economy.

To understand that, you need to understand short selling. It’s a way of betting that stock will go down. And unlike regular trading, it can lose you unlimited amounts of money. Here’s how it works. (If you don’t care how it works, you can just skip to the next subhead.)

Imagine you have 10 spoons. I borrow them from you (for a small fee) promising to give them back to you next week. I sell the spoons for $1 each—confident that the price will go down. If, I’m right, I can buy them back for, say, $0.50 each next week. You get your 10 spoons back, and I make $5 profit.

But imagine if I’m wrong. Instead, the price of spoons goes up to $5.00 each. I have to spend $50 to buy all those spoons in order to give them back to you.

In regular trading, if I buy $10 spoons, the worse I can do is lose $10—which only happens if the whole world suddenly decides spoons are worthless. But with short selling, the higher the price goes up, the more I lose.

Last week, users of the Reddit Thread WallStreetBet did the equivalent of buying up every possible spoon they could get their hands on. Hedge funds that had shorted spoons had to desperately offer ridiculous sums of money to get their hands on them.

Except, instead of spoons, it was stock in GameStop. Predicting that GameStop would go bust seemed a safe bet. Who’d buy a game on a disk, in a pandemic, when you can download it without leaving your house?

But the bet wasn’t safe. As the share price shot up, hedge funds lost billions. Melvin Capital needed a bailout from another business.

It’s the way some hedge funds have operated for decades: Spot a mistake and ruthlessly exploit it. George Soros, for example, became the man who broke the Bank of England when he spotted that the United Kingdom was trying to keep the pound too strong, and he poured money into weakening it.

But now, the little guys were using the same tactics against the hedge funds—and the Internet cheered them on.

Until the Goliaths struck back.

As GameStop shares rose higher, smaller traders found themselves blocked out from trading. Robinhood is an app that allows people to trade for free—and was the weapon of choice for many of the “little guys.” Robinhood abruptly blocked its users from buying shares in GameStop and other shares in the crosshairs of WallStreetBets.

Its users were furious. People threatened class action lawsuits. Robinhood was accused of acting more like the sheriff of Nottingham, breaking the rules to benefit the rich. If you were big enough to trade with one of the big brokers, you could trade in GameStop. But if you’re a little guy, you’re blocked.

Robinhood does a lot of business with Citadel—the same fund that bailed out Melvin Capital. Robinhood was accused of stepping in to save the big bank, at the expense of its users.

If that’s true (and Robinhood strongly denies it) then the United States’ regulators need to step in and do something about it.

The trouble is, they’re also paid by the big banks. The Biden administration’s new Treasury secretary, Janet Yellen, has received $800,000 in speaking fees from Citadel and $7 million in fees overall from Wall Street. She has refused to recuse herself from advising Mr. Biden on the issue.

“I can only imagine the uproar if a member of Donald Trump’s administration had been in a similar position,” wrote Nigel Farage. “Yet in the case of Yellen, very few members of the mainstream media have scrutinized the situation. Furthermore, the retail brokers themselves should also be challenged over the conflict of interests in which they are caught.”

It’s the same instinct we’ve seen so much over the last few weeks: If we can’t control it, we’ve got to ban it. If you’re not a big media company, you can’t opine on national news. If you’re not big business, you’ve got to lock down; but if you’re Walmart, you can stay open. If you’re a big bank, you can trade. Anyone else, you’re banned.

WallStreetBets had their Discover Server—a type of chat app—shut down for “hate speech.” Facebook groups associated with the movement were also closed. When users gave Robinhood one star reviews on the Google Play Store, Google deleted them.

Anger at what appears to have happened has brought together some strange bedfellows. Politicians from Alexandria Ocasio Cortez to Donald Trump Jr. have condemned Robinhood and called for an investigation.

It will take time to get to the truth. But the Bible has a lot to say about corruption among the rich in this end time.

Here at the Trumpet we’ve been focused a lot on the book of Amos. The Anchor Bible Dictionary states:

Amos decried the social injustice, the oppression of the poor, and the lack of any moral or ethical values on the part of the rich and powerful. According to Amos, the spokesman of Yahweh, Israel was a violent, oppressive and exploitative society. The poor had to sell themselves into slavery to pay off trivial debts (2:6; 8:6). The rich falsified weights and measures (8:5) and traded dishonestly (8:6). Even the courts, the last bastion of hope for the poor, were corrupt. Judges were bribed to cheat the poor out of what little they had (2:7; 5:11-12). In fact, Israel was no longer capable of acting with justice (3:10; cf. 5:7, 24; 6:12). Truth and honesty were now hated (5:10).

“Let’s not forget that this is an end-time book for the people of Israel today!” noted Trumpet editor in Chief Gerald Flurry, after quoting the above in his booklet The Lion Has Roared.

Nigel Farage wrote, “During my long-running battle to take the UK out of the European Union, I often talked about the unholy trinity of big banks, big business and big politics.” How much are big business and big banks involved in the big politics dominating today? We already see Big Tech in bed with the radical left. What about big banks? Morgan Stanley, Dow and American Express have all stopped donations to any member of Congress who opposed certifying the election.

More generally, we live in a system where big business thrives on practices God decries as immoral. How many companies base their business models on encouraging people to go deeper and deeper into debt? And if these companies break the rules, they have the contacts and lawyers to get away with it.

God condemns immoral practices. But He does not condemn the rich simply for being rich. Amos himself was likely well off.

That’s not the case for many of those fighting the hedge funds. Log on to WallStreetBets and you’ll see many people motivated more by the desire to see the rich suffer than to get rich quick. That’s quite a high level of hatred—if people are willing to put their life’s savings on the line. It’s yet another sign that America is heading to civil war.

There is wrong on both sides. And I’ll focus on some of the dangerous investing encouraged by WallStreetBets in a later article. But this story has exposed how much the system is becoming rigged against the little guy.

The Prophet Isaiah wrote that “the whole head is sick, and the whole heart faint. From the sole of the foot even unto the head there is no soundness in it; but wounds, and bruises, and putrifying sores: they have not been closed, neither bound up, neither mollified with ointment” (Isaiah 1:5-6). There are massive problems in America’s political system, and we’ve focused a lot on those in recent weeks. But the whole economic system is sick too.

The root of the problem is that we’ve gotten away from God’s law—at every level of society. This departure from law is causing problems in family, in politics and in the economy. To see how, read our article “The Cause of the Crisis People Won’t Face.”