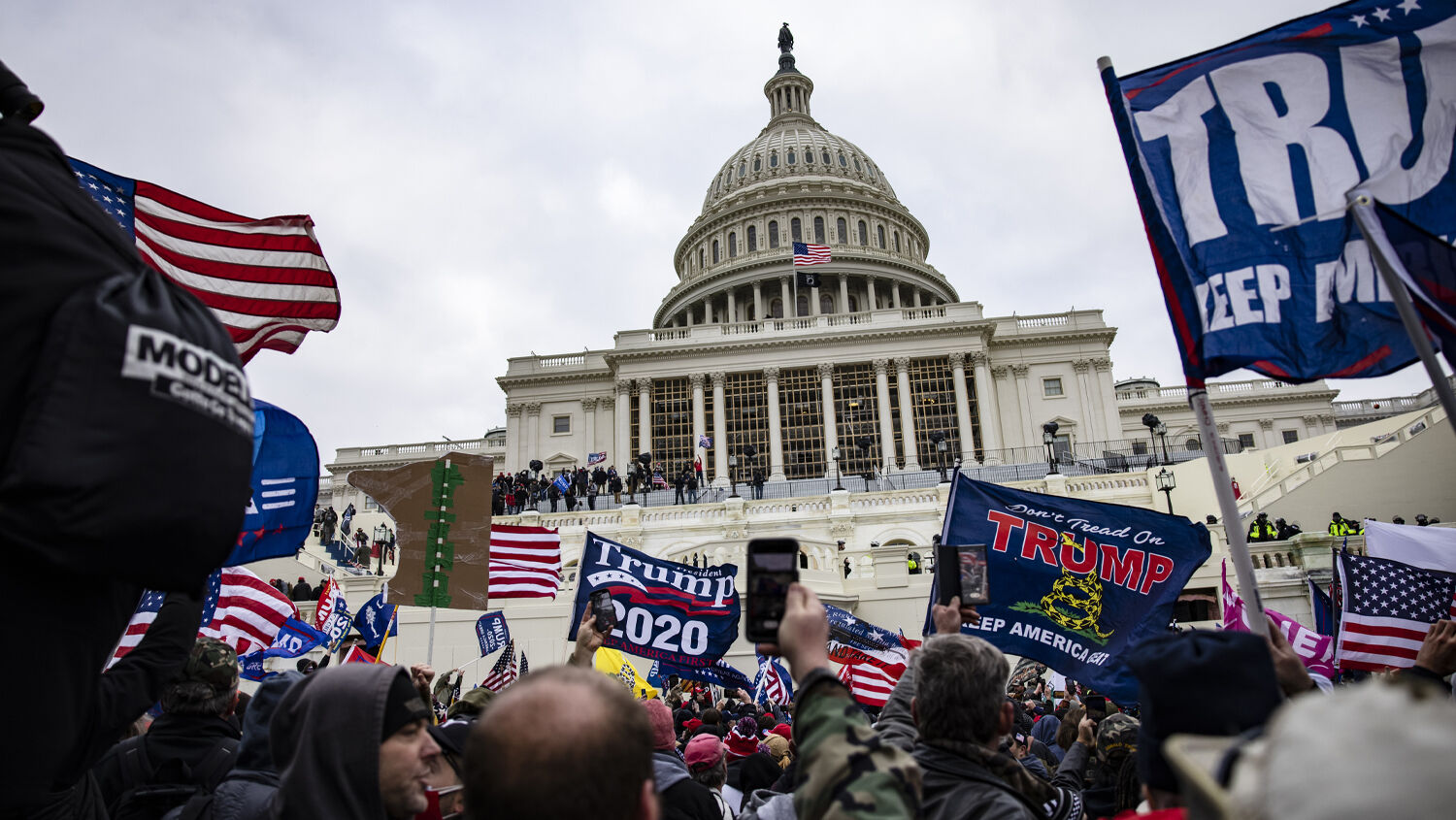 The second impeachment of Donald Trump is now underway. Who is using it to their advantage, how and why?

Democrats ceremoniously walked an article of impeachment from the House of Representatives to the Senate last night, which means that in two weeks, the Senate will commence an impeachment trial against Donald Trump.

The impeachment, which barely got started before Mr. Trump left the White House at the end of his term, has only one article. House Resolution 24 alleges that on January 6, as a joint session of Congress met to certify the Electoral College vote for Joe Biden, “Donald John Trump engaged in high crimes and misdemeanors by inciting violence against the government of the United States” when he “reiterated false claims that ‘we won this election, and we won it by a landslide.’”

Americans are wondering: What is the purpose, when President Trump peacefully handed over power a week ago and is out of office anyway? The main purpose of the impeachment article comes at its end: “Donald John Trump thus warrants impeachment and trial, removal from office [which is irrelevant], and disqualification to hold and enjoy any office of honor, trust or profit under the United States [which is the purpose].”

The radicals are on the warpath. They somehow got Joe Biden nominated; kept him in his basement or in front of small, controlled crowds for much of the campaign; censored horrifying information about him and his family; manipulated state governments to allow massive amounts of easily falsified mail-in ballots; manipulated voting machines; blocked poll watchers; interfered with the election from overseas; seized the Electoral College vote; colluded with businesses, news networks and social media; and steamrolled their way toward Inauguration Day.

Tens of millions of Americans sense that they’ve been manipulated.

Then came the January 6 rally at the Capitol. What happened then—and especially what has happened since—has been America’s Reichstag fire.

January 6 was the day that representatives and senators met in the Senate Chamber to sign their names and their honor to the certification of an illegitimate vote. It was also the day that hundreds of thousands of Americans came to Washington—in spite of social media manipulation and censorship, in spite of D.C. businesses closing their doors to them—to protest the subversion of the Constitution and their fundamental right to govern themselves through elected representatives.

The day would end in tragedy.

The Capitol riot—and how it has been manipulated over the past three weeks—reminds a lot of people of what happened at the Reichstag in 1933. Someone (we still don’t know who) burned the Reichstag, seat of the national legislature, virtually gutting it. For Germans, this was a national tragedy—but nothing like the national tragedy that followed as a result. Despite reports that he himself might have been connected to the arson, the new leader of Germany clamped down on those reports, used the destruction at the nation’s capitol building to target his enemies, and empowered his own radical movement. Those enemies were largely Jews. That leader was Adolf Hitler. His manipulation of the Reichstag fire consolidated his power over the nation.

Immediately after the Capitol riot, some Democrats claimed it was “America’s Reichstag fire.” But they stopped saying that when they realized what that implied about them.

Back to the United States. And back to December 2. It was a month after the fraudulent presidential election had taken place. President Trump delivered what he said “may be the most important speech I’ve ever made.” In that 46-minute speech, he denounced “tremendous voter fraud and irregularities, which took place during the ridiculously long November 3 elections,” both through unverified mail-in ballots and through digital election rigging.

To call attention to election theft, President Trump supported a “Save America” rally in Washington, D.C., on January 6. The crowds were huge: about 200,000. President Trump himself spoke, saying that rather than politely concede the election, “I said, ‘Something’s wrong here. Something’s really wrong. Can’t have happened.’ And we fight. We fight like hell, and if you don’t fight like hell, you’re not going to have a country anymore.” He also said that the crowd would march over to the Capitol “to peacefully and patriotically make your voices heard.”

The article of impeachment claims this use of the word “fight” incited an insurrection.

What happened next was ugly and dishonorable. Some in the crowd are guilty of being insurrectionists (but not how you think). Those who perpetrated it should be punished. In spite of the coordinated Democrat media-Big Tech narrative, the world knows it was not an insurrection attempt by Trump supporters, and the president did not incite it.

Most protesters remained outside, but tragically, some entered the Capitol doors. Some videos appear to show that the police actually allowed them in. Some videos show Trump supporters pleading with police officers to bring up backup and stop the rioters. Some videos show Trump protesters opposing and physically manhandling some of the rioters. But the rioters got in. Some smashed windows, chanted “Hang Mike Pence,” and vandalized the premises, including the office of Speaker of the House Nancy Pelosi. Some went so far as to enter the Senate Chamber, which was not in use, seemingly uninhibited, to say the least, by police. Representatives and senators actually evacuated for a few hours as police re-secured the building.

The intruders were largely dressed like Trump supporters and shouted pro-Trump slogans, but it is increasingly evident that not all of them were actually Trump supporters.

That is an absolute statement of fact, as the bloodiest and most tragic scene of the day proved.

What a tragedy and what a dishonor inside the very building that represents the American republic!

Yet this tragedy was not as it seemed. Dozens involved in the storming of the Capitol were found listed in the Federal Bureau of Investigation’s Terrorist Screening Database. Some were members of the Oath Keepers, an anti-government militia, but others were members of the far-left group Antifa. In fact, video and other evidence indicates that Antifa rioters staged or worsened the riot at the Capitol for the purpose of discrediting President Trump. One source claimed there was a “bus load” of them. If such a “false flag” strategy sounds unbelievably deceitfully, dangerously wicked, it’s straight out of the leftist insurrectionist handbook!

Law enforcement has identified at least two known Antifa members posing as President Trump supporters during the rally. John Sullivan, a well-known leftist agitator who founded the group Insurrection USA, is seen in several videos. Sullivan can be seen wearing a “President Trump 2020” hat and attempting to whip up the crowd outside the Capitol. He even literally demands that they set it on fire—an irony not lost on those who know about what happened at the Reichstag.

He can also be seen at the scene near the doorway to the Speaker’s Lobby. Not only is he among the crowd, but he is one of the ones trying to incite it! He can be seen yelling to the crowd and smashing the windows—on the other side of which police can be seen with their weapons drawn. And Sullivan can be seen near the woman as the gunshot rang out and she fell backward. He was so close that she almost fell on his foot.

But even as she lay on the floor bleeding, he wasn’t done. Independent Japanese journalist Masako Ganaha said that Sullivan began telling others that she was dead, even though he had no way of knowing. This probably was not the case at the time, and police who were on the scene were immediately attending her and saying that they could save her.

Sullivan was trying to enrage the crowd and make the situation even worse, which could have gotten even more people wounded or killed!

Radical leftist John Sullivan was not only there, he was heavily involved in the circumstance that led to that woman’s death!

Then Sullivan went on camera, including at cnn, to give his account of the violence—without them identifying him as a leftist agitator.

Liberal mainstream media outlets quickly harmonized in characterizing the riot as an insurrection. And they all seemed to conspicuously censor the fact that one of the worst “insurrectionists” caught on camera is a radical liberal who literally founded a group called Insurrection USA!

But that’s not the point for radical leftists. The point is that the violence occurred and therefore provides them a pretext to portray the violence at the Capitol as an “insurrection” and to try to put the blame on President Trump. This, in spite of the fact that those same executives designed their coverage of the summer 2020 Black Lives Matter riots to portray it as “mostly peaceful.” This, in spite of the fact that President Trump told demonstrators to be peaceful, and told them to go home as soon as violence broke out.

Everyone ought to oppose violence and destruction and the dishonoring of our Capitol. The scenes stir our emotions, and they should. But don’t let those who have manipulated everything else in this election manipulate this as well!

Whoever is responsible, this does not change the facts about the election. It was still stolen!

Some weak-willed lawmakers acted like the violence at the Capitol did change the facts about the election. They treated Joe Biden’s “win” as if it was now certifiably legitimate. Republican senators, like Kelly Loeffler of Georgia and James Lankford of Oklahoma, had promised to object to the certification of Joe Biden’s “victory” on January 6 but then cowardly declined to do so.

After the protesters were dispersed and members of Congress returned to the Senate Chamber, Rep. Paul Gosar of Arizona and Sen. Ted Cruz of Texas objected to Arizona’s election results. But both houses of Congress voted to overrule their objections. Later, Rep. Scott Perry of Pennsylvania and Sen. Josh Hawley of Missouri objected to Pennsylvania’s election results. Again, both houses overruled them. So, at 3:44 a.m. on January 7, Vice President Mike Pence, who himself had declined to intervene to stop the certification, announced that Joe Biden had won the presidency.

Ever since, Biden and his cabal have been rapidly consolidating—and exercising—the power they have gained as a result.

Security failed dramatically. Intruders entered the legislative building and perpetrated destruction. Powerful voices immediately coordinated to sensationalize the event and stir up the population. The new leader of the nation and those around him politically weaponized the disaster to target their enemies and consolidate their power.

Does this refer to Germany and the Nazis, 1933, or to the United States of America and the Democrats, 2021?

Listen to Stephen Flurry on today’s episode of the Trumpet Daily Radio Show.