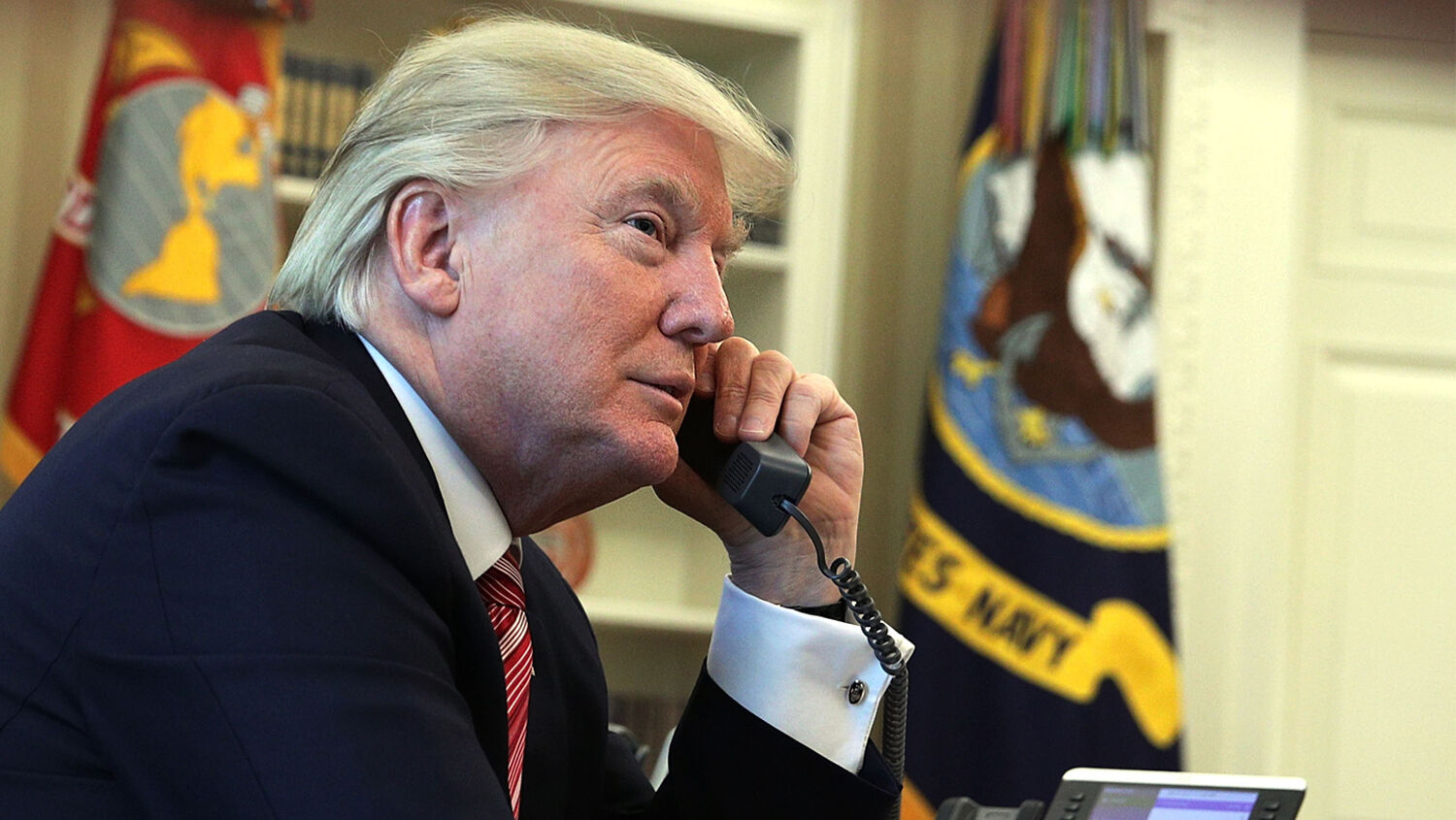 In normal times, we would not know this phone call took place. But the Trump resistance is hammering a certain part of it in order to attack the president. When it comes to taking down President Trump and the movement he stands for, his enemies will disregard any norm, any courtesy and almost any law! We saw it in the 2016 presidential campaign, we saw it all four years of the Trump administration, and it would be foolish not to expect to see it after November 3.

Less than 24 hours after that private phone call, a full, hourlong recording of it appeared on the website of the Washington Post. Along with the New York Times, the Post is one of the major media corporations that protects and amplifies the anti-Trump rebels the most. One wonders if Raffensperger’s office was colluding with the Post before the phone ever rang.

If you believe the Washington Post’s portrayal, the details of this call are explosive. President Trump was “pressuring” Raffensperger to “find” votes so he could overturn the election! The American and international press jumped in with their variations on that same portrayal: President Trump was like a mob boss trying to shake down Raffensperger for fraudulent votes so he could cling to power! The real election fraud has been revealed!

The Post and the other outlets zeroed in on this statement by the president: “So look. All I want to do is this. I just want to find 11,780 votes, which is one more than we have because we won the state.”

The Post sliced out this three-sentence moment from a call that lasted more than an hour and is currently repeating it and amplifying it ad infinitum.

This phone call does contain wrongdoing, but not by President Trump.

What is the context of those few sentences? What were they talking about for the rest of the time? In all their publishing of this private telephone conversation, liberal journalists at the Post and elsewhere are leaving out the rest of the story. Here is the rest of that particular paragraph from President Trump:

And you are going to find that they are—which is totally illegal—it is more illegal for you than it is for them because, you know, what they did and you’re not reporting it. That’s a criminal—that’s a criminal offense. And you can’t let that happen. That’s a big risk to you and to Ryan, your lawyer. And that’s a big risk. But they are shredding ballots, in my opinion, based on what I’ve heard. And they are removing machinery, and they’re moving it as fast as they can, both of which are criminal finds. And you can’t let it happen, and you are letting it happen. You know, I mean, I’m notifying you that you’re letting it happen. So look. All I want to do is this. I just want to find 11,780 votes, which is one more than we have because we won the state.

Is this President Trump pressuring Raffensperger to commit voter fraud? The context doesn’t indicate that. He wants Raffensperger’s team to investigate voter fraud, because he is confident that those who are committing fraud are those who are working against him! On that same call, he said, “We just want the truth.”

It sounds like he is pressuring Raffensperger not to commit a crime but to do his job and stop a crime!

Evidence of election fraud in Georgia keeps surfacing, most notably the security video from State Farm Arena in Atlanta where ballot counters demanded more than once that poll monitors go home. One excuse was that there had been a “water main break” that we now know never happened. After poll monitors left, the ballot counters then proceeded to count ballots.

Raffensperger likely went to the Washington Post because this call was so abysmal, not for President Trump, but for him. President Trump detailed specific areas of fraud in Georgia. His lawyers said there were at least 25 separate categories of fraud that the state of Georgia could investigate. Most of these categories involve so many votes that, if found fraudulent, they would erase Biden’s majority.

Raffensperger couldn’t utter a single compelling rebuttal. Read the transcript yourself. Raffensperger simply said the president was “wrong.” He insists that his office has “looked into it.” When Trump’s team pressed Raffensberger’s team for evidence, they were told they had to just take their word for it.

No one has seen the state of Georgia’s report of what happened at the State Farm Arena on the night of Nov. 3, 2020. If we are to believe our own eyes, poll watchers left, journalists left, and ballot counters who were supposed to stop counting pulled boxes out from under the table and scanned and re-scanned the same ballots three to five times. Raffensperger says that if you think that’s obviously electoral fraud, your eyes are deceiving you.

You’re “wrong.” But you will just have to take his word for it.

Regarding the State Farm Arena video, all that Raffensperger had to say was, “We did an audit of that, and we proved conclusively that they were not scanned three times.” Raffensperger also claimed, “Rudy Giuliani or his people, they sliced and diced that video and took it out of context.”

These are general statements. This is not actual evidence. This is basically Raffensperger saying, What you see doesn’t matter: I will tell you what you saw.

At one point in the call, President Trump’s team thought it would be able to work with the Georgia secretary of state’s office to access the data they had been denied. Raffensperger’s lawyer quickly moved in to tamp down that misconception. The Trump team kept asking for permission to see the evidence that supposedly proves Raffensperger right, but his office kept denying them. During the call, one of President Trump’s lawyers said:

[W]hat we’ve been trying to do is to say, look, the court is not acting on our petition. They haven’t even assigned a judge. But the people of Georgia and the people of America have a right to know the answers. And you have data and records that we don’t have access to.

And you can keep telling us and making public statements that you investigated this and “nothing to see here,” but we don’t know about that. All we know is what you tell us. What I don’t understand is why wouldn’t it be in everyone’s best interest to try to get to the bottom, compare the numbers … to try to be able to get to the truth, because we don’t have any way of confirming what you’re telling us. You tell us that you had an investigation at the State Farm Arena. I don’t have any report. I’ve never seen a report of [an] investigation.

Aren’t reports concerning something as public as a United States presidential election supposed to be made public? Why isn’t the Georgia secretary of state’s office releasing the information? Why won’t the state of Georgia allow even the possibility of the Trump legal team seeing evidence held by that office?

Courts keep rejecting the Trump legal team’s lawsuits, so there is no court order to compel Raffensperger’s office to provide the information. But if the Georgia State Department has nothing to hide, why isn’t it willing to make the evidence public?

What possible good reason could it have for withholding the evidence?

As one of Trump’s lawyers said during the phone call, “It stands to reason that if the information is not forthcoming, there’s something to hide. That’s the problem that we have.”

This much-publicized phone call implicates Raffensperger’s reaction to fraud (stonewalling and lack of transparency) more than it implicates the president.

As a media organization, your reputation is all you have. Yet these news corporations and others are pinning their reputations to a fraudulent portrayal all for the purpose of further attacking a president who—supposedly—has only two weeks left in office.

Why are they so concerned? Why don’t they wait just 15 days until his term expires, his claims about the election are rendered comical and irrelevant, and their eagerly hoped-for Biden-Harris administration takes over?

Are they afraid there’s election-changing fraud in Georgia and beyond? And that President Trump will find it?

Over the past few weeks here at the Trumpet, we have been heavily promoting one single article. We’ve advertised it on Arutz Sheva, the Epoch Times, Newsmax, RealClearPolitics and elsewhere. If you read one thing on the Internet today, make it this. It’s by my father, Trumpet editor in chief Gerald Flurry, and it is a bold forecast of how this incredibly complex, incredibly wicked, election debacle in America will turn out. The title is “Why Donald Trump Will Remain America’s President.” It states:

The mainstream media insist there is “no evidence” the Democrats tried to steal this election. This is patently false: There is plenty of evidence. But it is also absurd when you think about what the left has been doing for the past several years! You would have to be naive not to think they are committing great frauds with this election. …

Mail-in ballots open the door for terrible fraud. Did you know that among the 27 countries in the European Union, 17 ban mail-in voting except in very rare cases? They know how susceptible such ballots are to fraud. Yet Democrats have used the coronavirus pandemic as a pretext to encourage as much mail-in voting as possible—and even to extend deadlines past Election Day. I truly believe they did that to enable themselves to steal this election—and I say that without apology! They have a long history of using voter fraud to sway elections.

A great deal of disturbing evidence has been emerging of voting irregularities and fraud—and it always favors Joe Biden! Yet many Republicans and supposedly impartial journalists speak as though there is nothing to be concerned about. They say everything was above board and that Donald Trump should concede. This shows shocking naivety and delusion!

What we’re seeing right now in Georgia is a part of that “great deal of disturbing evidence.”

My father also wrote that he is “certain that we are about to see some of the biggest frauds exposed perhaps ever!”

But beyond the phone call; beyond the State Farm Arena video; beyond the obfuscation of Secretary Raffensperger; beyond the unmailed, unsigned, unpostmarked, ineligible ballots; beyond the nonresident voters; beyond the dead voters; beyond the lies, there is a much stronger reason why my father made this forecast and wrote this article, even when the tide (and the tabulators) suddenly turned for Biden. You can understand what it is and then prove it against what is about to happen—but you’ll have to read “Why Donald Trump Will Remain America’s President” to find out.