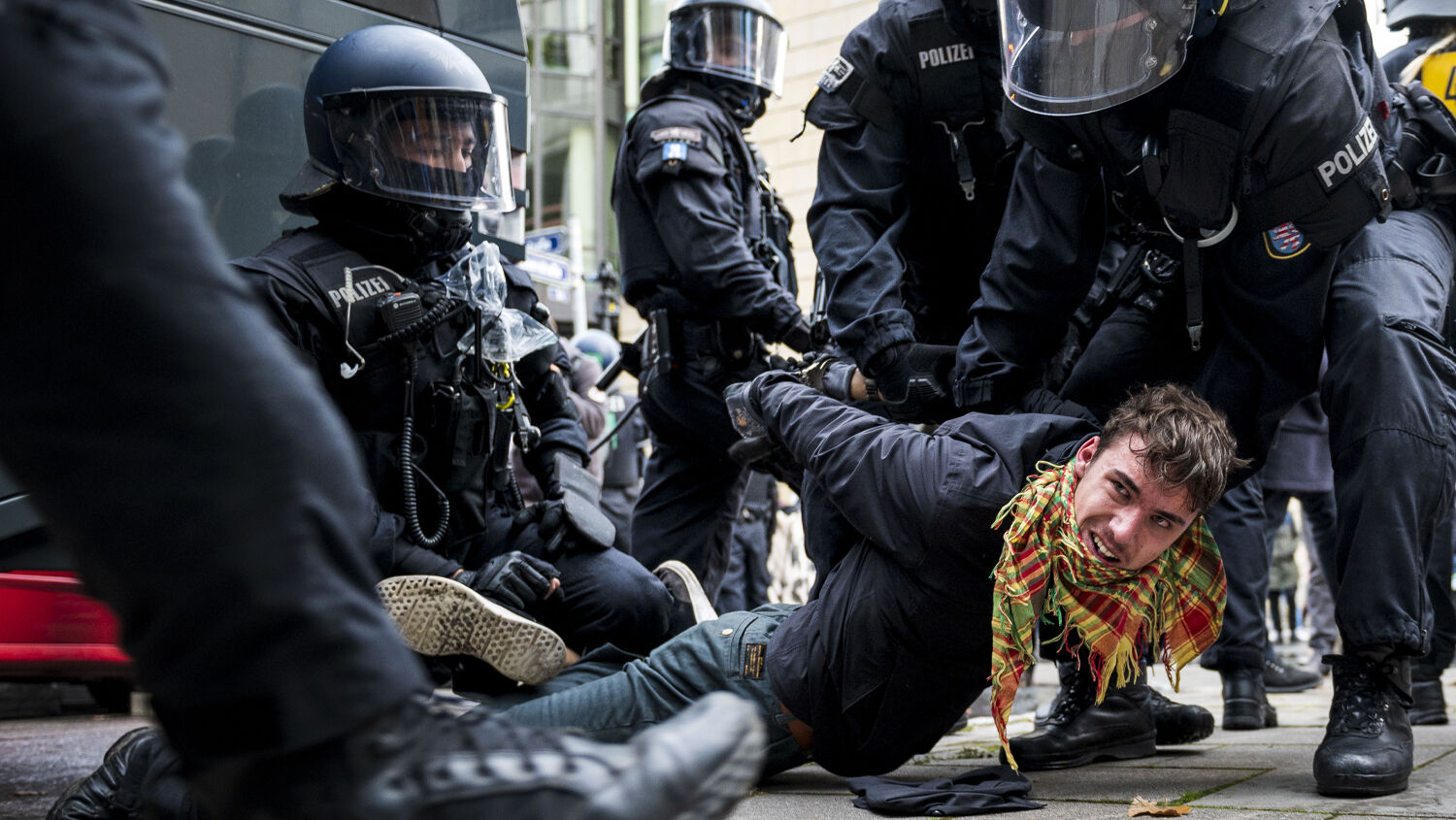 Police officers restrain a left-wing antifa counter-demonstrator who tried to block a demonstration of the Querdenker movement on November 14, 2020 in Frankfurt, Germany.
Thomas Lohnes/Getty Images

Opposing coronavirus lockdown is not an extreme position. Most Western politicians of the last 200 years would not have believed a pandemic like covid-19 would give governments the authority to put the entire country under house arrest.

But if you hold that view in Germany today, you’re faced with an impossible choice.

With at least five major political parties, in theory German voters have no shortage of options. But with coronavirus, it comes down to a choice between a dictatorship and neo-Nazis.

Whether you pick the far-left Left Party, the environmentalist Greens, the center-left Social Democrats, or the center-right Christian Democrats, all the major parties in Germany generally agree: The country must be locked down; civil liberties must be restricted; anti-lockdown protests should be shut down.

Last month, Germany passed changes to its Infection Protection Act that restrict its citizens’ rights and give the government dramatic new powers to govern by decree. Opponents compare it to Adolf Hitler’s 1933 Enabling Act, which allowed him to turn the country into a dictatorship. While that’s an exaggeration, the mainstream Deutsche Welle noted that the law “creates a legal basis for the government to restrict some fundamental rights enshrined in the German constitution in its attempt to fight the pandemic.”

Those parties not in government opposed the law—not because they oppose the lockdown, but because they believe Parliament should be the authority locking it down.

What if you believe “all men are created equal, that they are endowed by their Creator with certain unalienable rights”—rights which cannot be removed by government whim? In Germany, only one party agrees with you: the Alternative für Deutschland (AfD). And that’s not a great choice.

Some AfD leaders would fit in as standard, right-wing leaders in Britain and America. But some are outright neo-Nazis. Senior party leaders have said that Germany should be proud of the “accomplishments” of its soldiers in World War i and ii; they’ve called for Holocaust memorials to be torn down.

This isn’t just a problem of a few leaders and a few rowdy Nazi-like meetings. The idea that Germany should be proud of its military heritage and must revive that tradition is part of who this party is. There’s some disagreement about the role World War ii should play in that revived tradition. But at its heart, this party is a radical departure from 75 years of German politics.

The AfD isn’t the only extremist group poised to benefit from the backlash against the lockdowns. The Reichsbürger movement has played a major role in the protest. Reichsbürger—or citizens of the Reich—claim that the federal government is illegitimate and the German empire is the true, rightful German state.

I don’t believe most people protesting the restrictions support the Reichsbürger. But this radical movement is using the crisis to gain prominence.

Germans have a tough choice—vote for a covid dictatorship or vote for neo-Nazis. Working out which is the lesser of the two evils is hard.

The AfD has lost support for its anti-lockdown stance, but in the long run it could work to its favor. Over the last few months, the percentage of those opposed to Germany’s anti-coronavirus polices has almost doubled, from 15 percent to 28 percent. As the risk of the virus fades, and the economic costs caused by the response becomes clear, that figure could rise much higher.

We saw a similar process in 2015. It’s not extreme to be a bit nervous about inviting hundreds of thousands of Middle Eastern migrants into your country. Yet all of Germany’s mainstream parties encouraged Syrian migrants to come to Germany. The media treated anyone who disagreed as racist. Only the AfD fought back.

The migrant crisis gave the AfD a massive boost. Increasingly the choice for Germans is several different flavors of authoritarian left—with its identity politics, support for globalism and enthusiasm for state control—or the AfD.

Similar trends have already produced radical outcomes in other countries. For years, both America’s Republican and Democratic parties brought in similar, left-wing policies, regardless of which you picked. The result: Donald Trump. Fed up with the lack of the real choice, Americans voted for a man who certainly broke the traditional politician mold. They found a way to choose something different.

In the U.S., the trend didn’t produce Nazis. There’s no evidence that kind of ideology has any widespread support in America. President Trump’s critics have called him all kinds of names, but they never produce examples of true Nazism.

But in Germany, the fact that this kind of political crisis is leading to the rise of a party that at least has neo-Nazi sympathies is disturbing. Again, I don’t think every AfD voter is a Nazi. I have a lot of sympathy for those who view the AfD as the lesser of all the evils. But there’s clearly an element in German politics that’s not present in America.

In Germany, there is clearly an appetite for radical change—and just like in the U.S., they will get it.

Daniel 8:23-24 contain a prophecy for “the latter times.” You can put this passage alongside others, such as Daniel 11:40-45, to see that this is talking about a German-led “king of the north.”

Daniel 8:23 calls this coming leader “a king of fierce countenance, and understanding dark sentences”—he’s not democratic. Gesenius’ Hebrew-Chaldee Lexicon defines “dark sentences” as “twisted, involved, subtlety, fraud, enigma.” He’s a canny operator who is able to take advantage of chaos and political dissatisfaction to grab power for himself. A parallel scripture in Daniel 11:21 tells us: “And in his estate shall stand up a vile person, to whom they shall not give the honour of the kingdom: but he shall come in peaceably, and obtain the kingdom by flatteries.” The Jamieson, Fausset and Brown Commentary says, “The nation shall not, by a public act, confer the kingdom on him, but he shall obtain it by artifice, ‘flattering.’”

Germany’s mainstream parties are all in lockstep. Dissatisfaction with them is breeding dissatisfaction with the whole system. Already some are turning to Nazi-affiliated groups as an alternative. The stage is set for a strongman to take advantage of this appetite for something different.

If you look at the whole story in biblical prophecy, you see that Satan has a three-pronged attack. First he attacks God’s Church. Second, he tears down the values within the nations of Israel. Finally, he will bring the Holy Roman Empire to destroy those nations …. We are watching that second phase unfold before our eyes, as the Holy Roman Empire becomes a world superpower.

America is being torn down. A radical change in German politics and the rise of a strongman are a major part of the next stage in world events. You have to understand the changes coming to German politics. I’ve only scratched the surface. To really see what the Bible says is coming to Germany, read our free booklet A Strong German Leader Is Imminent.