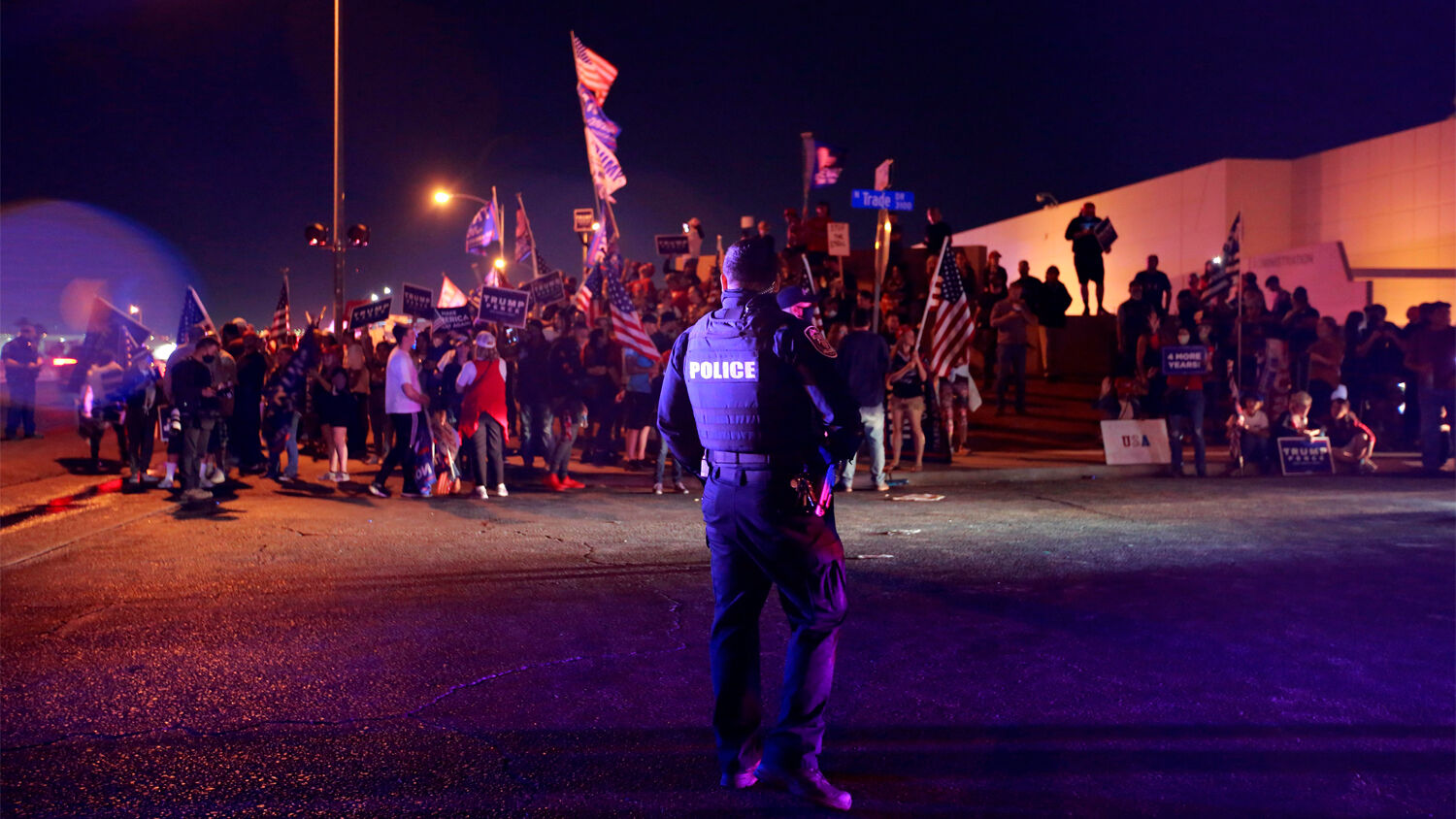 The prophecy in Isaiah 59 was written by the Prophet Isaiah in the late eighth century b.c., roughly 2,700 years ago. Like so many Old Testament prophecies, the message is dual. Isaiah’s warning was directed at the people of Israel and Judah anciently, as well as at the descendants of Israel (primarily America and Britain) and Judah (the Jewish state) in the end time. (Herbert W. Armstrong explained the biblical identity of America and Britain, as well as the principle of prophetic duality, in his free book The United States and Britain in Prophecy.)

Isaiah 59 is a perfect description of the United States right now. This passage prophesies America’s present unparalleled political crisis and reveals why we are here. Read this chapter objectively and you will readily agree: Americans are living Isaiah 59.

The chapter begins with sobering but reassuring words: “Listen now! The Lord isn’t too weak to save you. And he isn’t getting deaf! He can hear you when you call! But the trouble is your sins have cut you off from God. Because of sin he has turned his face away from you and will not listen anymore” (verses 1-2; Living Bible).

God sees America’s plight. He hears the cry of the affirmed. He doesn’t lack the power or the desire to help, but God refuses to rescue the nation. Why? Because of the people’s sins—their behavior cuts them off from God.

God describes this behavior in more detail in the next 13 verses. Notice, while this abhorrent conduct involves sins like violence and murder, it is all really a function of the nation’s deeply perverted relationship with law. Isaiah 59 describes a society where deceit and corruption are systemic. Where law is subjective, the rule of law inconsequential. Isaiah 59 describes a nation of liars.

Because of this perverted relationship with truth and law, the reasoning, opinions and judgments of the people, and especially their leaders, are corrupt. And this corruption leads to violence and death. Isaiah 59 describes a nation that is incapable of thinking clearly and rationally, even about the simplest problems. And it’s all because of its rejection of law.

“None pleads for the right; None decides for the truth; They trust upon tricks and false speech, Conceive mischief and bring forth deceit” (verse 4; Ferrar Fenton). Talk about “trust upon tricks”—the radical left dug deep into its box of tricks in this election. The evidence of large-scale voter fraud is simply overwhelming: the ballot counting machines that experienced “glitches”; the signed affidavits alleging fraud from hundreds of witnesses; ballots filed by dead people; poll watchers being sidelined; vote counts that disproportionately favor Joe Biden; voters filling out multiple ballots; illegal ballot harvesting; bags full of ballots arriving in the wee hours of the morning.

On the Trumpet Daily Radio Show earlier today, Stephen Flurry exposed how for months the mainstream media groomed the American public for a protracted counting process, one in which there would be a “red mirage” on election night, but Joe Biden would emerge victorious, and then Donald Trump would refuse to concede and would attempt to steal the election. They knew this would happen because they were planning to make it happen.

The more you dig here, the more you realize that this whole election scandal has been carefully orchestrated. For months, even years, these people have “conceived mischief”; they are executing a carefully crafted plan to “bring forth deceit.”

Notice too, “None pleads for the right; None decides for the truth ….” The radical left is able to get away with it because there is a wholesale disregard for the truth in the land! Isaiah says that “none”—not Fox News, not Republican politicians, not even evangelical Christians—will be interested in the truth.

Verse 14 describes a society and political system where “… truth falls dead in the streets, and justice is outlawed” (Living Bible).

Again, this prophecy is so incredibly apropos. There are Pulitzer Prize-winning stories to investigate here, but no one seems to want to seriously search for the truth. This isn’t just a political crisis. This is a moral and spiritual crisis, and it infects virtually the entire leadership structure of America.

The message coming from the mainstream media and from most politicians is clear: There is no evidence of fraud; the claims are unfounded; there is nothing to investigate. It’s exactly as Isaiah warned, “justice is outlawed”—it’s forbidden, banned, totally unnecessary!

Why won’t any of the major media organizations seriously investigate Dominion Voting Systems, the company that provided ballot counting machines to multiple States? Texas refused to use these machines because it was concerned about fraud. There are reports that Dominion is connected to former staff members, and even family members, of Dianne Feinstein and Nancy Pelosi, two radical Democrats. There are reports that in Georgia, Dominion delivered a mysterious update to its counting machines on the eve of the election. Dominion has been linked to fraud in previous elections. Was Dominion used to commit some sort of cyber coup?

These claims merit investigation, but so far the truth about Dominion has “fall[en] dead in the streets.”

Then there’s Hawkfish, the public relations firm set up by billionaire Michael Bloomberg. This company created the narrative of a “red mirage” followed by a blue resurgence, followed by a Trump coup. Before the election, Axios, the New York Times, cnn and others all pushed this narrative in an effort to prepare the public for what we are now experiencing. But it looks as if all these organizations received this “red mirage” talking point from Hawkfish. Hawkfish is financed by a man who hates the president and is staffed by radical liberals, including former employees of Barack Obama.

Sadly, in America today “none decides for the truth,” so the truth about Hawkfish, at least for now, “falls dead in the streets.”

Isaiah 59:5-6 read, “You spend your time and energy in spinning evil plans which end up in deadly actions. You cheat and shortchange everyone …” (Living Bible). As I explained in my Trumpet Brief last week, the radical left has been “spinning evil plans” for 12 years or more.

And Trumpet editor in chief Gerald Furry has been warning us about this the whole time! You can read these clarion warnings in America Under Attack and Great Again. If you haven’t read it already, you must read his article from earlier this year, “A Dangerous New Age of ‘Will Worship.’”

In this article, Mr. Flurry exposed Satan the devil as the ultimate source of this war on law and truth. He wrote, “The radical left is casting aside the foundational law of the land, telling us that it is just getting in the way. We don’t need that old law, they insist. We know what justice is. You can trust us! Such reasoning paves the way for tyrants! Tyrants hate facts and truths that limit their power. So they ignore reality in favor of their own ‘magic interpretation’ of the world. Every tyrant is a tool that the devil can use to cast God’s truth to the ground (Daniel 8:12). We must recognize the evil spiritual force behind this push to undermine the law!”

The Ferrar Fenton translation of Isaiah 59:7 reads, “Their feet run to evil,—And haste to shed innocent blood; Their genius,—contrivance of crime,—In their haunts are destruction and ruin.”

Many of the major cities where the voter fraud appears to have occurred—cities like Philadelphia and Pittsburgh—are infamous for their deep corruption. Everyone knows, on both the left and right, that the political process in these cities is rigged. Some of these people have been doing it so long, they are now “geniuses” at committing crimes—which means they’re “geniuses” at causing destruction and ruin.

The Living Bible translation says, “… wherever you go you leave behind a trail of misery and death” (verse 7). This election, and more specifically the radical left’s attempt to manipulate the outcome of the vote, puts America squarely on a trail of misery—a trail that leads to violence, civil war and death.

“You don’t know what true peace is,” Isaiah warns in verse 8, “nor what it means to be just and good; you continually do wrong and those who follow you won’t experience any peace, either” (Living Bible).

Unless God somehow intervenes, there can be no peaceful outcome to this election. Right now, the tens of millions of Americans who voted for Donald Trump are upset by the way the election was conducted. A Politico poll showed that 70 percent of Republicans don’t believe the election was free and fair; 78 percent believe mail-in voting led to widespread voter fraud.

On the other hand, if the claim that Joe Biden was elected president is reversed, if Donald Trump remains president—an outcome Bible prophecy indicates will happen—then Biden voters will be unhappy. The mainstream media will be especially livid, and Antifa and blm will almost certainly take to the streets and set more U.S. cities on fire.

America will not experience peace as a result of this election, and it’s all ultimately because of the Satan-inspired spirit of lawlessness coursing through the land.

Think about all the preelection polls confidently declaring Joe Biden the unambiguous winner. Informed by their magnificent models, pollsters like Nate Silver and others fully expected one outcome (“expected light”), but experienced the complete opposite (“darkness”). They groped and stumbled like blind men, incapable of seeing the truth—that Donald Trump is far more popular than they want to believe—even though it shined brightly before them (recall the massive Trump rallies).

Tragically, this situation makes America look like a “corpse” beside nations like Russia and China, and increasingly Germany, who behave like “vigorous young men.” You can be certain America’s enemies are watching this election; they are already plotting ways to exploit this debilitating crisis.

In verses 15-16, the Prophet Isaiah begins to show how this prophecy ends: “Yes, truth is gone, and anyone who tries a better life is soon attacked. The Lord saw all the evil and was displeased to find no steps taken against sin. He saw no one was helping you, and wondered that no one intervened. Therefore, he himself stepped in to save you through his mighty power and justice” (Living Bible).

The lawlessness and injustices, and the terrible, nation-crushing violence and suffering that come as a result, will end. These verses show that God will eventually step in and save America, but not before the nation falls into catastrophic violence, slavery and nuclear devastation.

But God’s use of Mr. Trump to save America is only temporary. At some point, the spirit of lawlessness described in Isaiah 59 prevails and America will descend into calamity and suffering.

Just think: All of this was prophesied 2,700 years ago! The only way this is possible is if God exists! If only more people would allow this powerful lesson to resonate in their minds and lives. God is real, and events in America right now prove it.

Thankfully, God carefully measures the suffering as it unfolds. The Bible says that those who repent of their sins and turn to God in obedience are saved. Isaiah 59:20 says God “will come as a redeemer to those in Zion who have turned away from sin” (Living Bible).

Notice, God expects repentance! Salvation comes as a result of repentance, which means meaningful and evident change of behavior and thinking, “turning away from sin.” Above all, people will have to repent of their view of law and government.

To be saved, they must learn to love God’s law and truth. They must take on the attitude toward God’s law possessed by King David, a “man after God’s own heart.” The attitude that perpetually declares, “O how love I thy law! it is my meditation all the day” (Psalm 119:97).