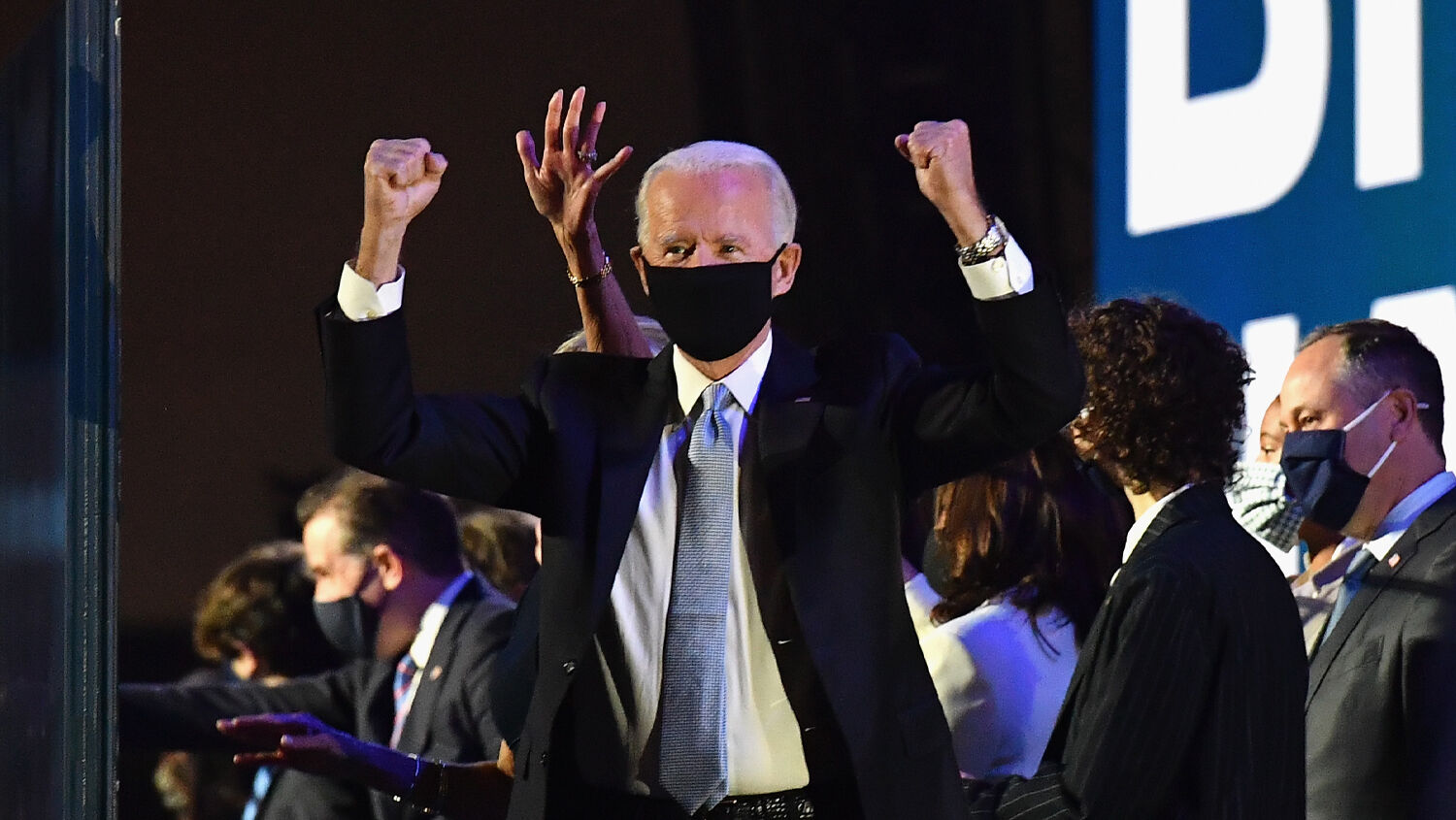 Joe Biden raises his fists in victory after delivering remarks in Wilmington, Delaware, on November 7.
ANGELA WEISS/AFP via Getty Images

But Bible prophecy indicates he won’t wear his crown long.

After days of deliberating over which states to call and when, every major news network in America was in perfect unison on Saturday, November 7, at 11:30 a.m. when they decided Joe Biden was the 46th president of the United States.

We have come to expect this from mainstream news commentators. They treated the Trump–Russia collusion narrative—a complete fabrication—like credible news. They treated President Donald Trump’s impeachment as if it weren’t a sham. They amplified the officials who politicized the covid-19 pandemic for the purposes of forcing the nation to shut down and harm the president. Now they are attempting to collude with Democrats to rig an election.

For four years, we have seen an avalanche of fake news, fake scandals and phony investigations based on specious and forged evidence. And in the last few months, we’ve seen all the fake polls designed to create an illusion—a fake narrative that led into a fraudulent and phony election full of fake votes that produced, according to the fake news, a fake president of the United States.

The propaganda wing of the Democratic Party has spoken, and they say Joe Biden will be the next president of the United States. It doesn’t matter how many voting irregularities there were last week. They ignore the inexplicable termination of counting on election night; the laughable “Biden only” ballot drops during the dead of night; the software “glitches” that swapped thousands of Trump votes for Biden; the tens of thousands of votes submitted after Election Day; the postal workers charged with backdating illegal ballots; the improbably high percentage of voter turnout in Wisconsin and parts of Michigan; the Republicans blocked from observing the counting process in Philadelphia, Pittsburgh, Detroit and Atlanta; the number of non-Nevada voters who voted for Biden in Nevada; those who voted multiple times; and the Election Day miracle that saw the graves of our fellow Americans open wide so tens of thousands of cadavers could vote for Joe Biden. None of this matters to the media mob.

But at least a few, like South Dakota Governor Kristi Noem, have denounced Joe Biden’s premature declaration of victory. When news anchor George Stephanopoulus asked Governor Noem on Sunday if she would be willing to work with Biden to reduce covid-19 rates in her state, Noem said: “This is a premature conversation because we have not finished counting votes. There are states that have not been called, and back in 2000, Al Gore was given his day in court. We should give President Trump his day in court. Let the process unfold because, George, we live in a republic.”

Governor Noem makes a good point. If the media are so sure Joe Biden won fair and square, what are they afraid of? They gave former Vice President Al Gore 37 days to challenge the 2000 U.S. presidential election, but are now moving to impose Joe Biden on the country amid ongoing recount requests and legal battles. They want to make it look like a Biden presidency is inevitable. They want to run out the clock before the countless voter fraud allegations are thoroughly investigated.

Keep in mind, states have not yet certified their election results, recounts have not yet started in Wisconsin and Georgia, and the Supreme Court has not yet ruled on those Pennsylvania ballots that came in after the deadline.

On Election Day, the New York Times posted this revealing tweet: “The role of declaring the winner of a presidential election in the U.S. falls to the news media. The broadcast networks and cable news outlets have vowed to be prudent.” They later deleted this tweet, saying, “We’ve deleted an earlier tweet that referred imprecisely to the role of the news media in the U.S. presidential election. The news media projects winners and reports results; it does not declare the winner of the election.”

After a severe backlash, the Times essentially apologized for overstepping its bounds. Then, five days later, they joined the media mob in declaring Joe Biden the winner! The news media’s role is to report facts, including credible evidence of election fraud, recounts and other pertinent information. But it has instead colluded to declare a radical new administration. And the whole world is expected to follow along. Many people are following along. Even most conservatives and Christians who strongly oppose Biden and the radical Democratic Party feel there is nothing they can do.

But when practically every prominent and powerful voice says, This is the way it’s going to be—no dissent tolerated, that is when God’s servants speak up and say, This is what God says! And that’s exactly what my father, Trumpet editor in chief Gerald Flurry, did over the weekend. In a lecture he delivered on Saturday, he told the audience that though the mainstream media had declared Biden as the winner of the election, “that’s not going to remain that way, even though it certainly looks like it.”

Read his Trumpet Brief from yesterday to learn why he would make such a bold claim.

My father has made bold claims before. One of the boldest had to do with a significant lawsuit, actually.

In my book Raising the Ruins, I wrote the history of how the Philadelphia Church of God, publisher of the Trumpet, began publishing Herbert W. Armstrong’s book Mystery of the Ages. This was a bold move, because the church Mr. Armstrong had founded, the Worldwide Church of God, held the copyright, was using it to destroy and censor everything Mr. Armstrong had taught, and was much larger and wealthier than the pcg. My father made that move anyway. He believed God inspired Mystery of the Ages and would work miracles to get it back into print!

The Worldwide Church of God sued us. We kept printing. We began printing Mr. Armstrong’s other major books: The Incredible Human Potential, The Missing Dimension in Sex and others. Another bold move! We won in district court. Worldwide appealed. The case dragged on for six years! Then California’s Ninth Circuit Court of Appeals ruled against us: The Philadelphia Church of God could not print Mystery of the Ages and must pay damages to the Worldwide Church of God. We appealed to the Supreme Court, but it declined to review the case.

It looked like there was no way to get Mystery of the Ages to the world. It looked like Worldwide would not only censor that wonderful book but take thousands or perhaps millions of dollars away from our ability to spread its message!

Here is what Ralph Helge, a member of and lawyer for the wcg, wrote to a former pcg member. He boasted that my father had “exhausted all legal remedies available to him. Any attempt of [the Philadelphia Church of God] to acquire any court ordered right to print [Mystery of the Ages] is over, done, finished. Legally there is no place else for him to go on this issue. I don’t know how else I can say it. [The Philadelphia Church of God’s] only ‘right’ is to stand before the bar of justice and have damages assessed against them and attorney’s fees for the wrong that it has committed.”

Yet even in this situation, my father was adamant that “one way or the other, God will provide a way for us to mail that book again.” He said that Habakkuk 3:2 and other scriptures prophesied that God would “revive thy work in the midst of the years.” Just a month after Helge’s victorious-sounding letter, the Worldwide Church of God abruptly and inexplicably decided to sell us the copyright to Mystery of the Ages and 18 other books and booklets by Mr. Armstrong!

To many members and former members of the Worldwide Church of God, this was a stunning reversal. But we expected it! Because my father expected it. And he expected it because a miraculous copyright victory was absolutely necessary to fulfill Bible prophecy!

The United States of America may soon experience its own miraculous victory as God intervenes and fulfills the prophecies He has recorded. The fight is far from over.