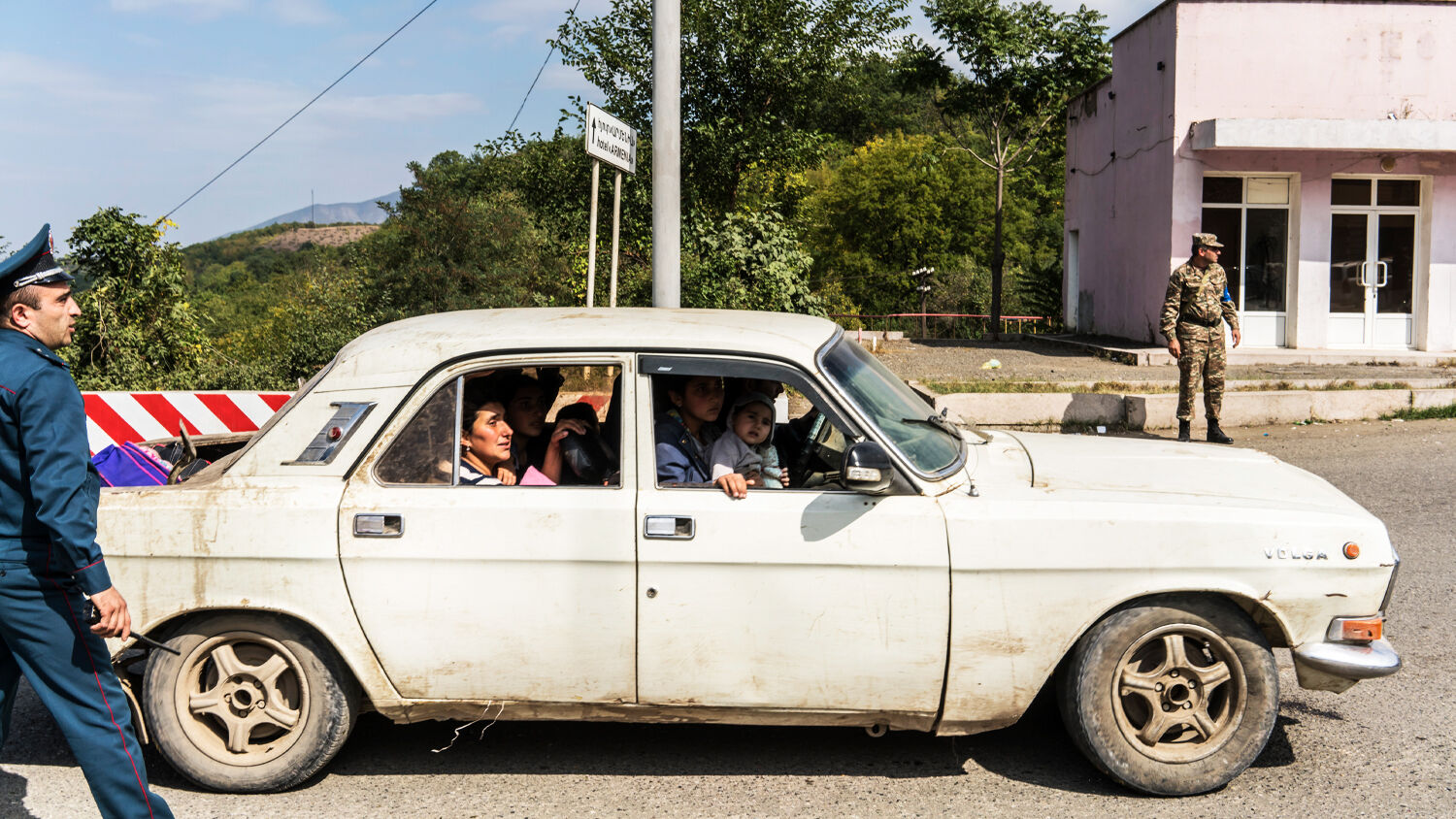 People gather at the edge of Stepanakert, Azerbaijan, on September 29, seeking rides toward Yerevan, away from the fighting in Nagorno-Karabakh.
Brendan Hoffman/Getty Images

Fighting broke out over the weekend between Armenia and Azerbaijan. Both sides claim to have killed hundreds of enemy soldiers. Both have mobilized their militaries and are ready for more fighting.

As usual, the implications of such a conflict reach around the world. The countries sit at the crossroads of Asia, the Middle East and Europe—and the major powers in the region have strong ties to the fight. If they get involved, this could become something much bigger.

Why do we keep finding ourselves in these situations? Armenia and Azerbaijan went to war around 30 years ago. Around 30,000 people were killed.

But the war never really ended: In 1994 it was paused, becoming one of many potential explosions. The 20th century gave us two major hot wars, and one cold one. Now we live in a world of “frozen conflicts”—fights that are not resolved. The fighting has stopped, but no peace treaty has been signed and the grievances that caused the fights are still there. They threaten to defrost and turn hot at almost any time.

With all of our enlightened experience and expert knowledge, we can’t solve these wars. Instead, we’re left with a world full of potential fires. Why?

The roots of many of the frozen conflicts go back to the end of the Cold War. The disintegration of the Soviet Union left pockets of people in one country who would rather live in another. This is a frequent theme in even non-Soviet frozen conflicts. Countries are simple 2-D shapes on maps. But where different ethnicities live, who historically controls what part of a country, etc, is more complex.

Most in Nagorno-Karabakh are Armenian. In the ussr it belonged to Azerbaijan—but that was no big deal since Armenia did too. But in the late 1980s, as the ussr fell apart, the conflict exploded. Armenia took Nagorno-Karabakh, but neither Azerbaijan nor the international community recognize this. The Armenians in the enclave are happy with the situation. But the pockets of Azerbaijanis are not.

The ties to outside countries quickly add up. Azerbaijan is very close to Turkey. Ethnically, the Azerbaijanis are a Turkic people, and Turkey emphasizes that brotherhood—talking about them as “two states, one nation.” Armenia, meanwhile, hates Turkey—as Turkey killed around 1.5 million Armenians beginning in 1915. Instead it’s much closer to Russia, hosting a Russian military base. It is one of six members of the Collective Security Treaty Organization (csto), Russia’s equivalent of nato.

Iran and the European Union are also in the mix. Azerbaijanis are the second-largest ethnic group in Iran—and include Supreme Leader Ayatollah Ali Khamenei. But Azerbaijan’s politics are very different, and so Iran tends to be closer to Armenia. The EU has reached out to both sides, eager to have any friends it can get in such an important crossroads. Both powers know that the historic invasion route from Europe to Persia runs right through this region.

Some speculate that Turkey is behind the most recent clashes. Azerbaijani President Ilham Aliyev declared that “the Turkish people will stand with their Azeri brothers with all their means.” Turkish President Recep Tayyip Erdoğan also pledged to support Azerbaijan by “all means.” Some reports claim Turkey is moving fighters from Syria to the Caucasus to get ready for the face-off. “The scale of the attack suggests that substantial preparation lay behind it, and it is unlikely Azerbaijan would have initiated the fight without Turkish guarantees of support,” wrote Tim Ogden for the Spectator. Armenia has drifted away from Russia and is now closer to the EU. Turkey may be banking on the Russians standing aside and letting Armenia get punished for its drift—giving Turkey an easy victory.

If so, it’s a gamble and an illustration of the dangers such frozen conflicts hold. They all have ties to wider powers—ready to be exploited any time it’s in a bigger power’s interest.

So why are we still stuck with them? We have so many flash points where people aren’t fighting right now but could start very soon: Israel–Palestine, Pakistan–India, North–South Korea, Crimea, Cyprus and many more. We may be able to patch things up with a temporary ceasefire, but the fundamental causes of the conflict remain unsolved.

Never before has there been so much study into sociology, anthropology, international relations, human behavior—all the science that goes into war and peace. Yet it has failed to give us an answer. Why?

In his book Politics Among Nations, Hans Morgenthau made a critical observation:

The essence of international politics is identical with its domestic counterpart. … The tendency to dominate, in particular, is an element of all human associations, from the family through fraternal and professional associates and local political organizations, to the state.

The causes of war and of conflicts between individuals are the same. We will only solve conflict on the large scale once we’ve solved it on the small. We can’t create peace between nations until we can create it within families.

Why this connection? “The abolition of war is obviously the fundamental problem confronting international thought,” wrote Morgenthau. “To solve the problem one must clearly first determine its cause or causes. What makes a solution appear so difficult for the non-rationalist mind is the variety of causes involved—causes which have their roots in the innermost recesses of the human heart.”

Conflict on all levels, he argues, from family to national, is caused by something in the “innermost recesses of the human heart.”

Morgenthau probably never knew it, but his analysis is backed up by the Bible. Man has not known the way of peace, Romans 3:17 informs us. Why? Because “[t]he heart is deceitful above all things, and desperately wicked …” (Jeremiah 17:9)—which is why the world is littered with examples like Nagorno-Karabakh.

We can apply a bandage to stop the bleeding for a time, but we don’t know how to cure the wound. And at times, conflicts we thought were long settled become problems again.

But the Bible also tells us there is a solution—there is a way of peace that God reveals. And this resemblance between personal and international relations makes it a practical solution. Few of us are statesmen who can implement the way of peace between nations. But we can all implement it in our relations with other people.

Our free booklet The Way of Peace Restored Momentarily is about an individual who was able to talk to statesmen about this way of peace—and even helped it be put into practice in a small way in this world. But it also shows how you can implement this practical way in your life. As usual, you can read it online or order your own free print copy.