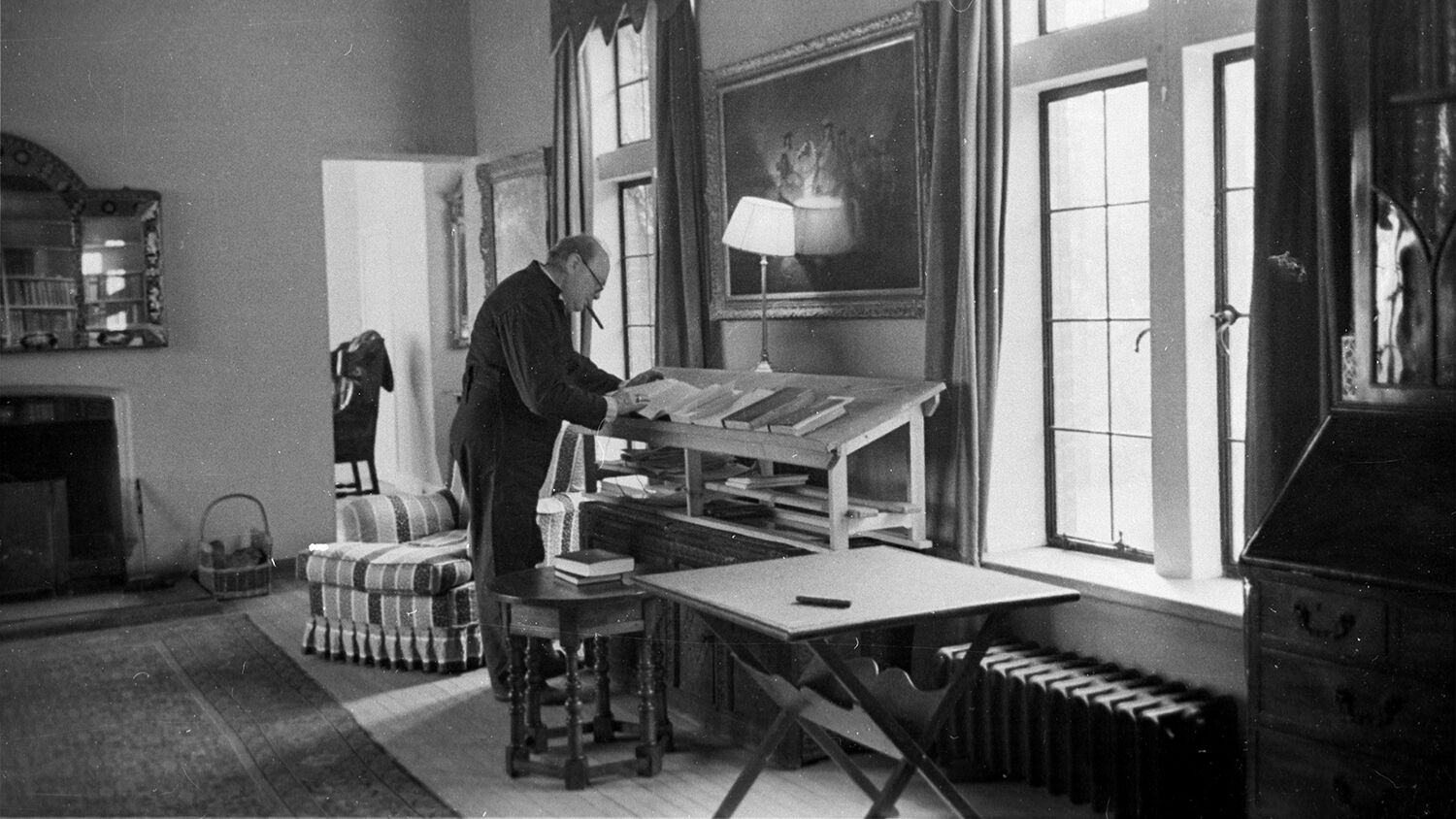 British statesman Winston Churchill at home in the study of his Chartwell estate in Kent.
Kurt Hutton/Picture Post/Hulton Archive/Getty Images

Soon, visitors to Chartwell, Winston Churchill’s beloved home, may be thoroughly informed on why he was a horrible person.

The National Trust, which operates Chartwell and many other important parts of England’s heritage, published a list of properties with links to slavery and colonialism. When I saw that Chartwell was one of the 96 properties on its list of shame, I assumed it was for the usual reasons: Maybe some previous owner had a second cousin who once looked at a slave. But instead, Chartwell makes the list because of Churchill.

“He was prime minister during the devastating Bengal famine of 1943, the British response to which has been heavily criticized,” the Trust said. The Bengal famine attack is too outrageous to bother debunking—though many others have done so. Churchill tried his best to help India. It was a bit tricky though because he was busy fighting a war for the freedom of the world.

Nothing has changed at Chartwell yet—but the Trust has made clear it will introduce the changes soon. Tarnya Cooper, the Trust’s curatorial and collections director, said they would work to take links to colonialism and slavery into account and “integrate that into our narrative.”

“In the past we’ve told probably really straightforward stories, possibly from one particular direction,” she said. “We want to be able to tell more nuanced stories so that we can provide open, honest, accurate and fair assessments of places ….”

Of course, Churchill’s not the only one to get the “nuance” treatment. Rudyard Kipling is also on the naughty list. His crime? “[T]he British Empire was a central theme and context of his literary output,” according to the Trust’s report. He thought the British Empire could be a force for good in the world and was quick to criticize it on the occasions when it failed to live up to his high standard. For that, we must be told all about how bad he was.

Churchill has consistently topped polls as the greatest-ever Briton. Kipling’s poem “If” was voted the nation’s favorite. Yet our elites despise both.

Andrew Roberts, who recently wrote Churchill: Walking With Destiny, pointed out: “It’s a sign of how ignorant the National Trust has tragically become that it mixes up slavery with colonizing, considering that Britain’s mutually beneficial relationship with her colonies—to which Churchill was proud to dedicate his life—continued long after slavery ended in 1833, which was 41 years before Churchill was born.”

Just five years ago, we were arguing about whether the British Empire was a force for good. Now association with the Empire is enough to damn a person’s memory.

Those attacking these individuals in the name of slavery are actually helping modern slavery flourish.

As Marcus Walker pointed out in the Critic, modern slavery is flourishing. China locks millions in concentration camps, attempting to reduce or wipe out a whole race of people through forced sterilization. Qatar is building stadia, using forced laborers, to host the World Cup.

If we’re going to fight for the freedom of these slaves, we need to have pride in our power—a belief that the West can be a force for good. As Walker pointed out, Britain needs to return to narratives and beliefs “which gave us the moral resolve to fight German tyranny in the 20th century, French tyranny in the 18th and 19th centuries, and devote almost 2 percent of our national income fighting slavery in between.”

“It takes moral courage to fight evil,” he wrote. “It is easier not to. We need to recover a sense of moral and cultural pride if we stand any chance of holding our own in this coming moral disputation—and one which can be shared by all of our citizens.”

Kipling exhorted the nation to reach for a selfless ideal of empire. True, he didn’t use the most politically correct language—no one today would write about the “white man’s burden”—but he encouraged the nation to follow a strict moral code and to work to make the world a better place. We could do with a lot more of his spirit today.

Churchill’s life has so many lessons to mine. He showed how to be right when most of the world is wrong. He showed how to be alert in a dangerous world. His life shows that just about all of the media and academia can get things horribly wrong—and that the results of such an error can be lethal. He stirred a whole nation to develop the courage to stand against evil. He could do so again if we would study him.

But when we need these lessons the most, we bury them.

There’s so much critical information there that we have a free booklet on it: Winston S. Churchill: The Watchman. Its author, Trumpet editor in chief Gerald Flurry, recorded several Key of David programs at Chartwell in the 1990s.

“There has probably never been a greater political watchman than Winston Churchill,” states the introduction. “His foresight saved the Western world from demise in World War ii. Yet today, the West scorns his message. The biggest tragedy of World War ii is that we didn’t learn from that shameful and near-fatal disaster.”

This attack on Churchill isn’t just a subject for those who like history. It is a danger to all of us. If our leaders had more of his spirit, we would confront evils and threats before they became a problem. Here in Britain, we wouldn’t be so quick to surrender the historic freedom’s Churchill cherished just because a couple “experts” drew a line on graph. The whole world would be a better place.

The free world narrowly avoided extinction in the ’30s and ’40s. Winston Churchill sounded a warning that, if heeded, would have prevented World War ii and saved tens of millions of lives.

If we spit on Churchill’s legacy today, what hope do we have for the future? What chance have we of avoiding an even worse conflict that opens with nuclear weapons?

That’s another question this booklet deals with. As Churchill said, “He must indeed have a blind soul who cannot see that some great purpose and design is being worked out here below.” A loving God will not let mankind wipe itself out in World War iii. In Churchill’s time, Britain and America held days of prayer and many believed God was helping them in that war. Winston S Churchill: The Watchman also shows God’s plan for the future—how He used Churchill to save Western civilization in World War ii, and how He will save the world in World War iii.

As with all of our material, this booklet is completely free—you can order a print copy or read it online.