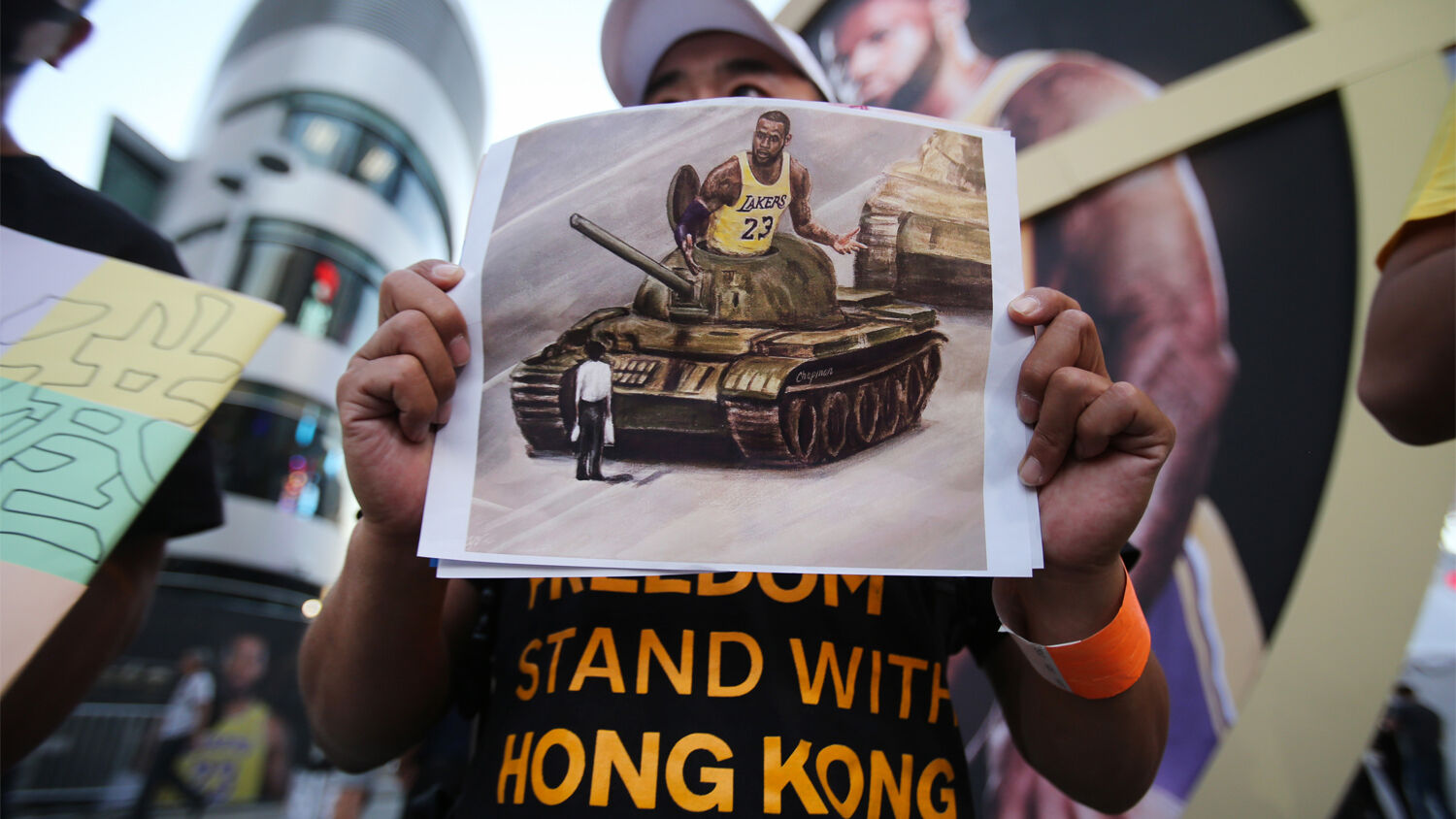 Why the nba supports the Democratic Party and China

The National Basketball Association’s ratings have dropped by almost half over the last two weeks. Even United States President Donald Trump weighed in on the issue in a tweet on September 1. “People are tired of watching the highly political @NBA,” he tweeted. “Basketball ratings are way down, and they won’t be coming back. I hope football and baseball are watching and learning because the same thing will be happening to them. Stand tall for our Country and our Flag!!!”

Data analysis company Nielsen reports that the first round saw ratings drop 27 percent from last season. According to sports reporter Bobby Burack, the league’s ratings have decreased by 40 percent from two years ago. Why are people watching fewer nba games?

People are tired of watching the highly political @NBA. Basketball ratings are WAY down, and they won’t be coming back. I hope football and baseball are watching and learning because the same thing will be happening to them. Stand tall for our Country and our Flag!!!

A recent Harris poll surveyed almost 2,000 people about why they were watching less nba games. The most popular of the 10 choices was that “the league has become too political,” taking 38 percent of the vote. According to the poll, almost 50 percent of Democratic Party supporters actively follow the nba, compared to only about 34 percent of Republican Party supporters. Many Americans have become frustrated by the league’s support of Black Lives Matter and the Democratic Party.

The nba has approved phrases supportive of the Marxist Black Lives Matter to be on hundreds of players’ jerseys. Similar messages have been painted on basketball courts. The nba’s online store sells customizable jerseys, allowing phrases such as “Burn Jews” and “KillCops”; however, phrases like “FreeHongKong” have been blocked.

The nba supports those who believe American police are against blacks. In 2019, 28 unarmed black Americans were killed by police—out of 44 million black Americans. And those killed were committing crimes or posing a serious threat to others. This number doesn’t begin to compare to the state-mandated killings in China, a nation the nba invests heavily in.

The nba has been assisting China in training basketball players in Xinjiang, a region where China is actively working to exterminate the Uyghur people.

“The [Chinese] state regularly subjects minority women to pregnancy checks, and forces intrauterine devices, sterilization and even abortion on hundreds of thousands, the interviews and data show,” the Associated Press reported in June. “Police raid homes, terrifying parents as they search for hidden children.” These policies saw birth rates in Xinjiang plummet 24 percent in 2019. At least 1 million Uyghurs are held in barbed-wire indoctrination camps. According to espn, a former nba employee who worked at the Xinjiang academy claimed the atmosphere there was like “World War ii Germany.”

There have been reports of basketball players being physically abused in the nba-sponsored training program held in China. espn gave a revealing report on July 30, claiming that “American coaches at three nba training academies in China told league officials their Chinese partners were physically abusing young players and failing to provide schooling.” nba chief operating officer Mark Tatum said in an interview with espn that the league is “considering other opportunities” for the training program. While some sources say training facilities have been closed, others say that they are still open.

Some prominent voices in the U.S. have publicly demanded the league give an explanation for why it purportedly supports human rights in the U.S. while ignoring human rights abuses in Xinjiang and Hong Kong. Senators Ted Cruz, Marsha Blackburn and Josh Hawley have all confronted the nba over its involvement in China. “Given the nba’s troubled history of excusing and apologizing for the brutal repression of the Chinese Communist regime, these omissions are striking,” Senator Hawley wrote in a letter to the league.

Houston Rockets general manager Daryl Morey caused an international dispute in October last year when he showed support via Twitter for the pro-democracy protesters in Hong Kong. China’s state-run television network China Central Television stopped playing nba games. Tencent, a Chinese streaming network, stopped playing games initially. That network has since resumed showings, but not games that include the Rockets. The dispute came only months after the nba signed a $1.5 billion deal with Tencent, making Tencent the league’s largest overseas partner. It is estimated that the dispute cost the nba hundreds of millions of dollars.

With a population roughly four times that of the U.S., China is a massive, fast-growing market for the nba. More Chinese watch the league’s games than Americans. “Over 500 million people watched nba programming in China for the league’s 2018–2019 season, allowing team owners to collect revenue on nba China’s distribution of league content, merchandise sales and even the nba’s Playzone, an interactive space for youth,” cnbc reported on August 11. To continue to capitalize on this lucrative market, the nba prefers to have a president in the White House who is lenient toward China. “Suppose tensions between the U.S. and China continue post-U.S. presidential election. In that case, the nba’s business in China could continue to suffer, bringing even more pain to its salary cap, which is already expected to take a severe hit due to covid-19,” wrote cnbc. In the nba’s greed for money, the league is sacrificing a large part of the American market for the much larger Chinese market.

The nba is a lot more hypocritical than what many people know. Many realize that the vast majority of the league’s players are black, but fewer know that an even greater percentage of the team owners are white. “More than three quarters of the multimillionaire players are African-American. Over 90 percent of the billionaire team owners are white,” wrote Victor Davis Hanson for American Greatness on August 30. Hanson continued:

Yet the entire industry—players, coaches, owners, staff—lecture Americans ad nauseam about their supposed sins. The monotonous sermons have become transparent medieval redemptions—given the mortal sin that the nba sold its very soul to a racist, genocidal, and totalitarian China—to recover billions abroad for the billions lost in viewership and attendance at home.

Nondiverse multimillionaires, working for even less diverse billionaires, finger-pointing at middle-class Americans on the evils of privilege, in the pay of the Chinese Communist Party, is not a way to win back fans.

Millionaire nba players are boycotting games to protest police brutality and genocide in their own country—while they and their league continue to make lucrative deals with China as it brutally stamps out protests in Hong Kong, tramples the rights of the people of Taiwan, and imprisons its own people in concentration camps, sterilizing their women, aborting their babies, and likely selling their hair for profit. How does that fit the nba’s heavily advertised sense of virtue? …

If people are so upset about racism, slavery and genocide, why focus on America?

Trumpet editor in chief Gerald Flurry answers this question and identifies the ultimate source of the hypocrisy of the radical left in his free booklet America Under Attack. “There is an unseen reason why troubles are intensifying as never before,” Mr. Flurry writes. “You cannot understand events without recognizing this truth. We are seeing the aftereffects of a calculated, aggressive, satanic attack aimed at weakening and ultimately destroying the nations of Israel, starting with the world’s most powerful nation!” (To prove that America and the British Commonwealth are end-time descendants of ancient Israel, read our free book The United States and Britain in Prophecy, by Herbert W. Armstrong.)

The Bible explains the unseen reason for the division in America. It also provides hope of a united world soon to come. To learn more about the evil spiritual force dividing America and the hope the Bible contains, read your free copy of America Under Attack, by Gerald Flurry.