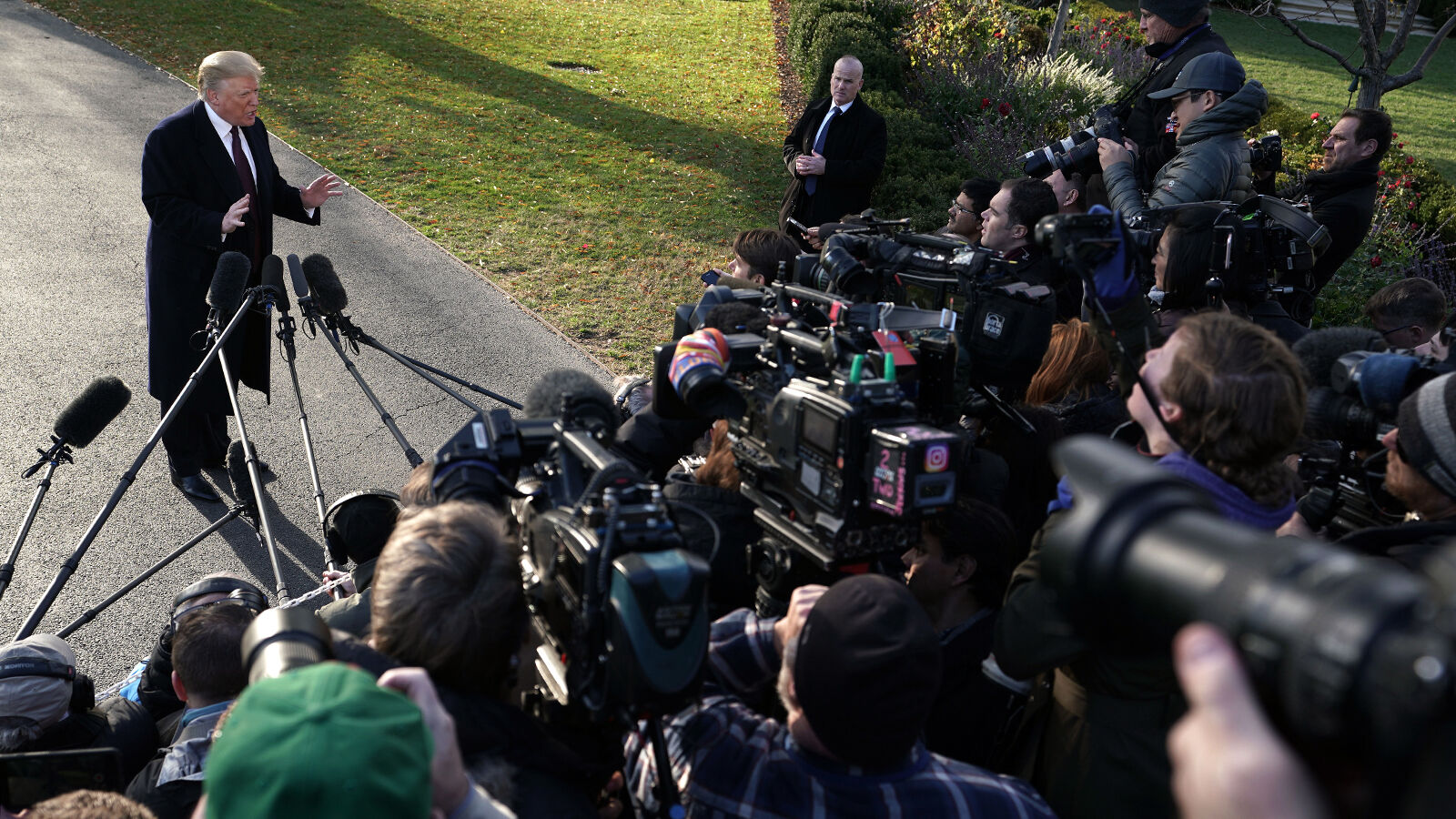 U.S. President Donald Trump speaks to members of the media outside the White House in Washington, D.C.
Alex Wong/Getty Images

The fourth pillar of democracy is bringing about its destruction.

Since announcing his candidacy for president of the United States, Donald Trump has experienced a torrent of negative coverage. Just type his name into an Internet search engine or a social media site and see how many of the search results include positive or even neutral aspects of his presidency. Americans are used to hearing increasingly bad things about the president from both commentators and supposedly more objective journalists.

However, ever since the eruption of protests, riots and violence since May, it has become more apparent that journalists are not only biased in what they report, but also in what they don’t.

In 2017, President Trump called the press “the enemy of the American people.” Commentators and reporters met this with vitriol and condemnation, accusing the president of divisive, inflammatory and dangerous rhetoric. Journalist Carl Bernstein, who helped bring down the Nixon presidency in 1974, accused President Trump of exhibiting “an authoritarian attitude.” The Times called it a “striking escalation” akin to the language of “autocrats who seek to minimize dissent.” The Atlantic said it was “the language of an aspiring tyrant.” A.G. Sulzberger said the president’s “inflammatory language” would “lead to violence” against members of the press.

In June, as riots were ongoing, Kamala Harris said the riots wouldn’t stop. She characterized it as a movement. “They are not going to stop …,” she said, “and they should not, and we should not.” This is now the Democrats’ vice presidential candidate.

In August, Speaker of the House Nancy Pelosi called Republicans “domestic enemies to our voting system” and “enemies of the state.” This is virtually the same terminology as President Trump’s remark. But Pelosi is a Democrat. So while conservative outlets commented on it, the large media outlets like cnn, the New York Times, the Washington Post and nbc News didn’t cover it at all.

In 2017, President Trump’s statements were condemned as inciting violence. But who is being violent, and who is suffering violence?

Two weeks ago, Sen. Rand Paul had to be escorted by the police out of the Republican National Convention to be protected from a violent mob attempting to attack him and his wife. But this too received very little mainstream coverage. The violence and rioting that has engulfed American cities for two months has received little media coverage compared to what we would be hearing if conservatives were committing it. Reporters have consistently labeled protests as “mostly peaceful,” in some cases even while sharing photos of burning buildings—or even standing in front of burning buildings themselves, in person! They have downplayed or simply not reported violence and riots.

Now their narrative is becoming even more bold. Not only are they obscuring the destruction and violence being committed by radical liberals, they are actually starting a new narrative. Here is how the New York Times spun it: “As right-wing groups increasingly move to confront in U.S. cities, demonstrators are assessing how to keep themselves safe.”

Who, exactly, is threatening and dangerous? According to America’s largest media organizations, it’s not the people rioting and burning down buildings—it’s “right-wing groups.”

Mainstream media coverage in America has moved from bias to hypocrisy to distortion to outright lies.

On August 31, cnn journalist Joe Lockhart suggested that President Trump suffered from a stroke “which he is hiding from the American public.” The president’s doctor swiftly debunked this claim, yet it has predictably spread across the mainstream media. cnn also claimed that Vice President Mike Pence was put on standby to assume presidential powers after President Trump visited Walter Reed Hospital late last year.

The media are acting like President Trump is working below capacity, or on the edge of some kind of breakdown. This despite the fact that he has been constantly holding lengthy press conferences, answering questions and showing remarkable energy.

Meanwhile, Democratic presidential candidate Joe Biden has largely remained in self-imposed confinement to his basement. Last week, he came out, flew to Pittsburgh for a 12-minute speech in an empty warehouse, and took no questions from six members of the press—the only six people who attended the event. Yet the press seem unconcerned about his health or physical suitability for office.

On September 3, the Atlantic‘s left-wing editor in chief Jeffrey Goldberg made yet another outlandish claim about the American president. According to four anonymous sources, Donald Trump said American soldiers who sacrificed their lives in battle were “losers” and “suckers.” Immediately after Goldberg published his slanderous tale, a pro-Joe Biden group called “Vote Vets” released a skillfully edited commercial, filled with dramatic music and testimonials from the parents of dead veterans quoting Goldberg’s article.

It was yet another coordinated attack on President Trump from the Democrat media complex. Goldberg’s vicious smear, by the way, was quickly debunked by at least 10 on-the-record sources. But by that point, the lie had already traveled halfway around the world.

The mainstream media are so desperate to take down this president that they will say or write anything that disparages him, even if it is laughably untrue. They condemn President Trump’s rallies as death traps, while the “peaceful” no-mask Black Lives Matter protests are considered safe and even essential.

President Trump has been aggressively exposing the media’s hypocrisy and its lies. Speaking at Andrews Air Force Base after a Trump supporter was killed in the Portland protests, he said, “These are anarchists. … They’re burning down Portland. … And then the fake-news media will say that they’re friendly protesters. I’ll tell you, if we only had an honest press in this country, we’d be much more advanced. But we have a very dishonest press.” He went on to say:

The press should be ashamed of themselves. I think the press is actually—the media is what’s fueling this, more so than even Biden. … The press is really fueling this, and they’re fueling it horribly. And you’re doing a great disservice to your country.

The major media has covered up the truth and actively told complete lies. The movement that it is shielding and fueling is becoming more and more destructive and violent. In Portland, “mostly peaceful” protests included the killing of an innocent man.

The media is supposed to be the fourth pillar of democracy, the upholder of truth and freedom, holding the government and leaders accountable to the supreme law of the land. Yet America’s press are overrun with rank corruption, hypocrisy and duplicity.

In his article “A Dangerous New Age of ‘Worshiping the Will’” my father identified the deadly outcome of our present reality:

Because the media swooned over President Obama, he was able to amass enormous power to silence dissent. The media were simply unwilling to challenge him.

Many of Mr. Obama’s beliefs were unknown before he was elected because the media didn’t vet him. The press has a lot to answer for in the way they abetted this man and his ambitions!

Now, many of the same journalists who swooned over Barack Obama view everything President Trump does as proof of corruption and evil. The same people who conspicuously overlooked wrongdoing by the Obama administration are now manufacturing criminal accusations against the Trump administration. They are continually exposing their own rank bias and utter blindness.

We must be concerned about this. Without a free and truthful media, a republic cannot survive!

Radical Democrats are demonstrating that there is virtually no limit to what they will do to attack the president and undermine the last election—and the next one.

The mainstream media is making itself part of a movement that is destroying law and order! Look at what it refuses to cover, what it does cover, and how it covers it. Do truthful or even rational or even moderately biased news executives order their organizations to do what these news organizations are doing? Or do these marching orders come from people who are exerting their power according to their will?

The Russia-collusion story is returning to the fore once again. Mail-in voting and the United States Postal Service are suddenly pivotal to national security. The news has now been weaponized.

“This movement is lawless beyond words to describe,” my father warned. “Where will this lead? Most people don’t realize it, but it will soon become painfully clear that it is leading to unparalleled suffering if we don’t wake up! We don’t like to think about this, but we must! The type of revolution the radical left is promoting usually causes millions to spill their blood!”

We are already experiencing shocking violence. Rather than quenching it with the truth, the media is fanning the flames.

The Bible gives us the truth about where these lies all come from: Satan the devil. He is very real and he is affecting the world we live in today in a terrible way (2 Corinthians 4:4). The Bible says “there is no truth in him. When he speaketh a lie, he speaketh of his own: for he is a liar and the father of it” (John 8:44).

This push to cast truth to the ground leads to lawlessness. We have to fight lies with the truth, and the Bible is the one source of infallible truth remaining in a world full of lies. It is easy to be swept up in the torrent of the media’s lies today. “But the only way to escape the devastating catastrophes prophesied to engulf America,” my father wrote, “is to be rooted in truth—based on the Word of God.”