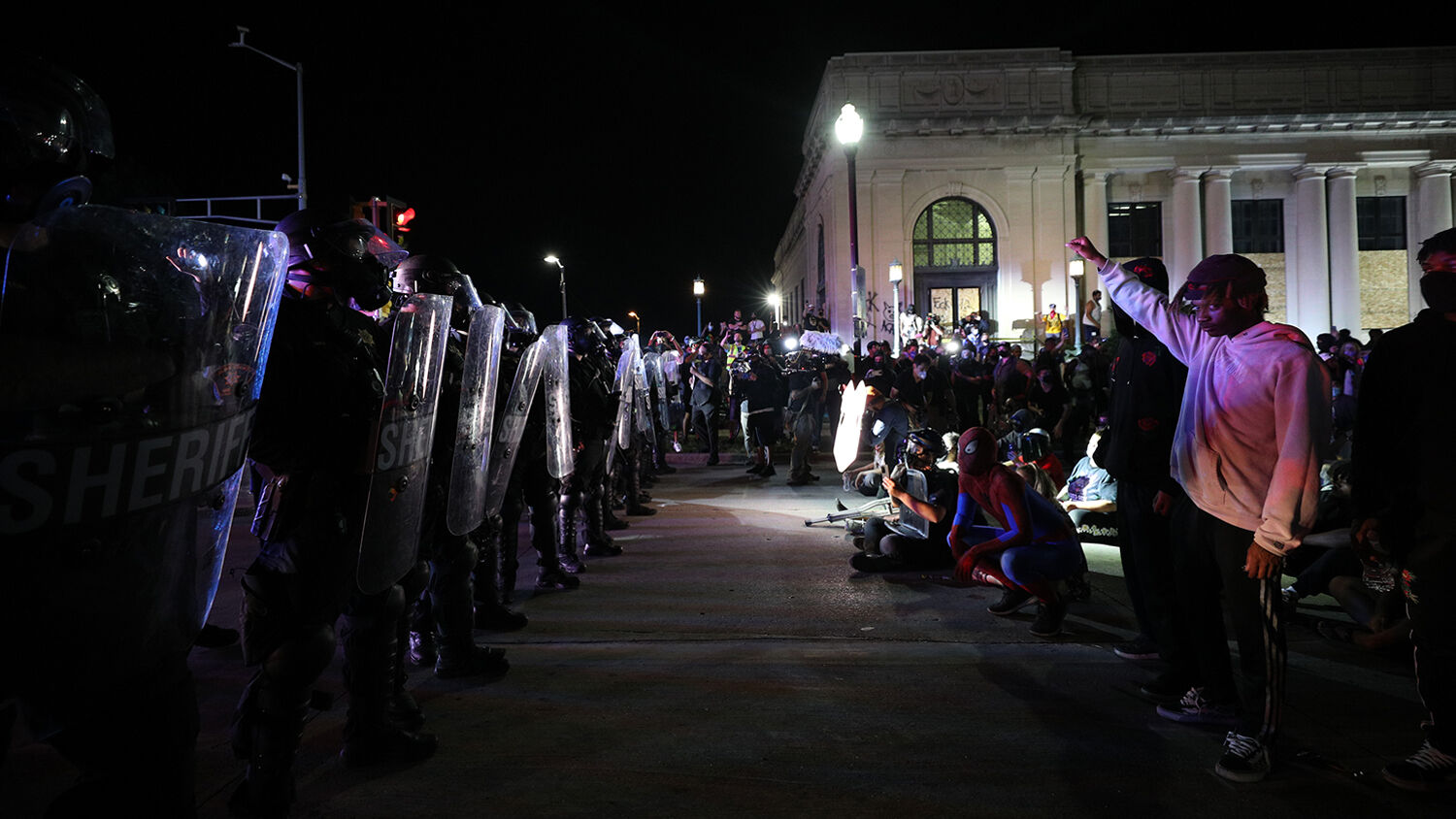 Protestors confront police in front of the Kenosha County Courthouse during a third night of protests on August 25, 2020 over the shooting of a black man Jacob Blake by police officer in Wisconsin, United States.
Tayfun Coskun/Anadolu Agency via Getty Images

When I wake up each morning, I generally spend 5 to 10 minutes reading the news, catching up on events that occurred overnight. After that, I settle into my study. Right now, I am studying the book of Ezekiel. More than a few times recently, I have had the profound experience of reading an article or watching a news clip and then minutes later seeing virtually the same scene described by the Prophet Ezekiel in a book written more than 2,600 years ago.

From start to end, the book of Ezekiel brims with prophecies describing in vivid detail the events and scenes unfolding daily in Britain and America. It’s an incredible book, one that is more relevant today than it was when Ezekiel wrote it thousands of years ago. You must study it.

Consider Ezekiel 7. This chapter prophesies the shocking end-time destruction of the people of Israel. We know this because it clearly says so: “And you, O son o man, thus says the Lord God to the land of Israel: An end! The end has come upon the four corners of the land” (verse 2; Revised Standard Version). How do we know Ezekiel wasn’t prophesying the demise of ancient Israel? Because when Ezekiel delivered this prophecy, there was no “land of Israel.” The kingdom of Israel had been destroyed and overtaken by the Assyrians more than 100 years before.

The events described here occur in the modern “land[s] of Israel,” the nations of America and Britain. (In my recent Trumpet article, “How to See God in History,” I explained one sensational prophecy proving America and Britain are biblical Israel. Herbert W. Armstrong does this even more thoroughly and convincingly in The United States and Britain in Prophecy.)

That’s precisely how a lot of people feel about America and Britain right now. 2020 began terribly, with America’s president being impeached and Britain engaged in a messy divorce from the European Union. Since then, it has been “disaster after disaster.” Coronavirus has transformed both nations, colossally, and in more ways than we yet realize; then Antifa and Black Lives Matter (blm) began torching cities, first Seattle and Portland, then Chicago, and now Kenosha. Meanwhile, uncontrolled fires have scorched 1.2 million acres of land in California and a massive hurricane has barreled into Louisiana. And this isn’t even close to the full list of disasters presently unfurling in Britain and America. Every day, certainly collectively, but individually too, is a “day of tumult.”

“Behold, the day! Behold, it comes!” verse 10 says. “Your doom has come, injustice has blossomed, pride has budded” (rsv). Other translations say “the rod” of injustice has blossomed. Injustice means a “lack of fairness,” “corruption,” “tyranny,” “repression” and “intolerance.” All of these terms describe the various facets of modern Britain and America, be it our governments’ ludicrous and irrational response to covid-19, the full-scale attack by the radical left on the history and traditions of Judeo-Christian America and Britain, the irrational hatred of President Trump, or the Marxist solutions and policies championed by Antifa and blm and embraced by huge swathes of society. There’s no fairness and impartiality, no defense of truth, no respect for tradition, or morality and law, or government and authority. America and Britain are plummeting into total corruption, intolerance and lawlessness—“injustice has blossomed!”

You have to meditate a bit to appreciate verse 12: “The time has come, the day draws near, let not the buyer rejoice, nor the seller mourn, for wrath is upon all their multitude” (rsv). The general state of America and Britain is becoming so grim and hopeless, there’s no point in getting too invested in the pursuit of material fortune. Clarke’s Commentary says: “Such is now the state of public affairs, that he who through want has been obliged to sell his inheritance, need not mourn on the account. … And he who has bought it need not rejoice in his bargain, as he shall soon be stripped of his purchase, and either fall by the sword, or be glad to flee for his life.”

The stock market is roaring, interest rates are low. There is opportunity to gain material wealth. But it’s all about to come crashing down! To those who have lost possessions or businesses, like those in downtown Seattle and Portland, or that torched car dealership in Kenosha, there is solace in the fact that the whole nation is headed the same direction. This prophecy does not justify inaction, and it doesn’t remove the need to plan or to be ambitious. But it does give perspective to our ambitions, to our relationship with this material world. Recall Jesus Christ’s words in Matthew 6:19, “Lay not up for yourselves treasures upon earth, where moth and rust doth corrupt ….” Now is the time to follow this admonition!

Ezekiel 7:19 says, “They cast their silver into the streets, and their gold is like an unclean thing; their silver and gold are not able to deliver them in the day of the wrath of the Lord …” (rsv). Making a killing on the market, owning the latest gadget, living in a luxury house with a safe chock full of gold—it all very quickly becomes irrelevant when armed domestic terrorists are burning down your workplace and marching down your street demanding you hand over the keys to your home.

Notice verse 14: “They have blown the trumpet and made all ready; but none goes to battle, for my wrath is upon all their multitude” (rsv). Trumpet editor in chief Gerald Flurry has warned that America and Britain are too reliant on technology, and that our enemies will infiltrate our military and communication systems and will have the power to hijack our military, preventing a response in time of war.

This prophetic scene also resonates when watching footage of the riots and protests in America’s cities. These are scenes of total chaos and anarchy—protesters firebombing government buildings, rioters beating innocent people in the streets—and there are often very few police to be found. When they are present, they are in a defensive position or in retreat. This isn’t the fault of the brave police officers. They are simply obeying orders from their cowardly political leaders who are afraid to go to battle.

Figuratively, this is happening all across Britain and America. Sirens are blaring warnings about our imminent cultural annihilation and political, social and economic collapse. But the mainstream media and our political leaders ignore the warning sirens. Truth is, much of the destruction occurring in these nations has been condoned and even deliberately orchestrated by many of the top leaders.

Verse 14 is so incredibly prescient: The warning signals are sounding, a small few, including Donald Trump and a few key members of his administration, and many valiant members of the national guard and police, are ready and willing to intervene—but in too many cases “none goeth to battle.”

Consider verse 15: “The sword is without, pestilence and famine are within; he that is in the field dies by the sword; and him that is in the city famine and pestilence devour” (rsv). Again, no rational person can witness events in America and deny the prescience of this prophecy.

Mr. Flurry explains the term pestilence in his book Ezekiel—The End-Time Prophet: “The word pestilence just means destruction or death (see the Gesenius’ Lexicon). One definition of the root word is ‘to lay snares, to plot against, to destroy.’” Isn’t this an apt description of the radical left and the way it operates?

“So this pestilence could be a plague of violence or burning—not necessarily a physical disease at all!” Mr. Flurry continues. “It can be defined as a plague of violence or rioting—such as the Baltimore riots in 2015 or the September 11, 2001, terrorist attacks! … The pestilence, or plague of violence, will cause many health problems that lead to famine. Sewage disposal will be disrupted. Gas lines will be broken. Jobs will be lost. Society will unravel and the collective panic will bring a stock market disaster! It will get so bad that violence and famine will take millions of lives!” (emphasis added).

It gets easier every day to recognize that America (and Britain) are on this path, the path of Ezekiel 7!

Verse 11 says that “violence has grown up into a rod of wickedness.” The violence is so intense and so widespread, it becomes a national affliction. Verse 23 says, “Make a chain: for the land is full of bloody crimes, and the city is full of violence.” These nations are becoming saturated with violence and criminal behavior. It’s one crisis after another, one violent riot after another, like links on a chain.

These verses and this term pestilence are a perfect description of what is happening in America’s cities right now!

I’ve highlighted only a few of the 27 verses in Ezekiel 7. Every single one perfectly describes America and Britain today! This book has 48 chapters total, many of which contain similar specific and clear prophecies about the end time. When we study biblical passages like Ezekiel 7, the question we really need to dig down into is this: How is it possible that events prophesied so long ago are being fulfilled so exactly? Gerald Flurry first wrote his book on Ezekiel in 2002, almost 20 years ago (though it was later updated to reflect the Baltimore riots and other events). The Prophet Ezekiel delivered his prophecies 2,600 years ago.

The fact that these two men so long ago prophesied the exact scenes now unfolding in Britain and America ought to make more people think and reflect!

Only God could make such specific forecasts and then see that they are fulfilled!

There is proof of God’s existence in the Kenosha riots! To understand this, you can’t just watch the news. We must also study the Word of God. If we only watch the news, we will easily get depressed. To have hope, to be inspired, to have understanding, we need to study God’s Word! Why not try it?

You have read the headlines and seen the horrible footage. It’s time now to study what God revealed about today’s news thousands of years ago. Why not start with the book of Ezekiel? Request your free copy here.