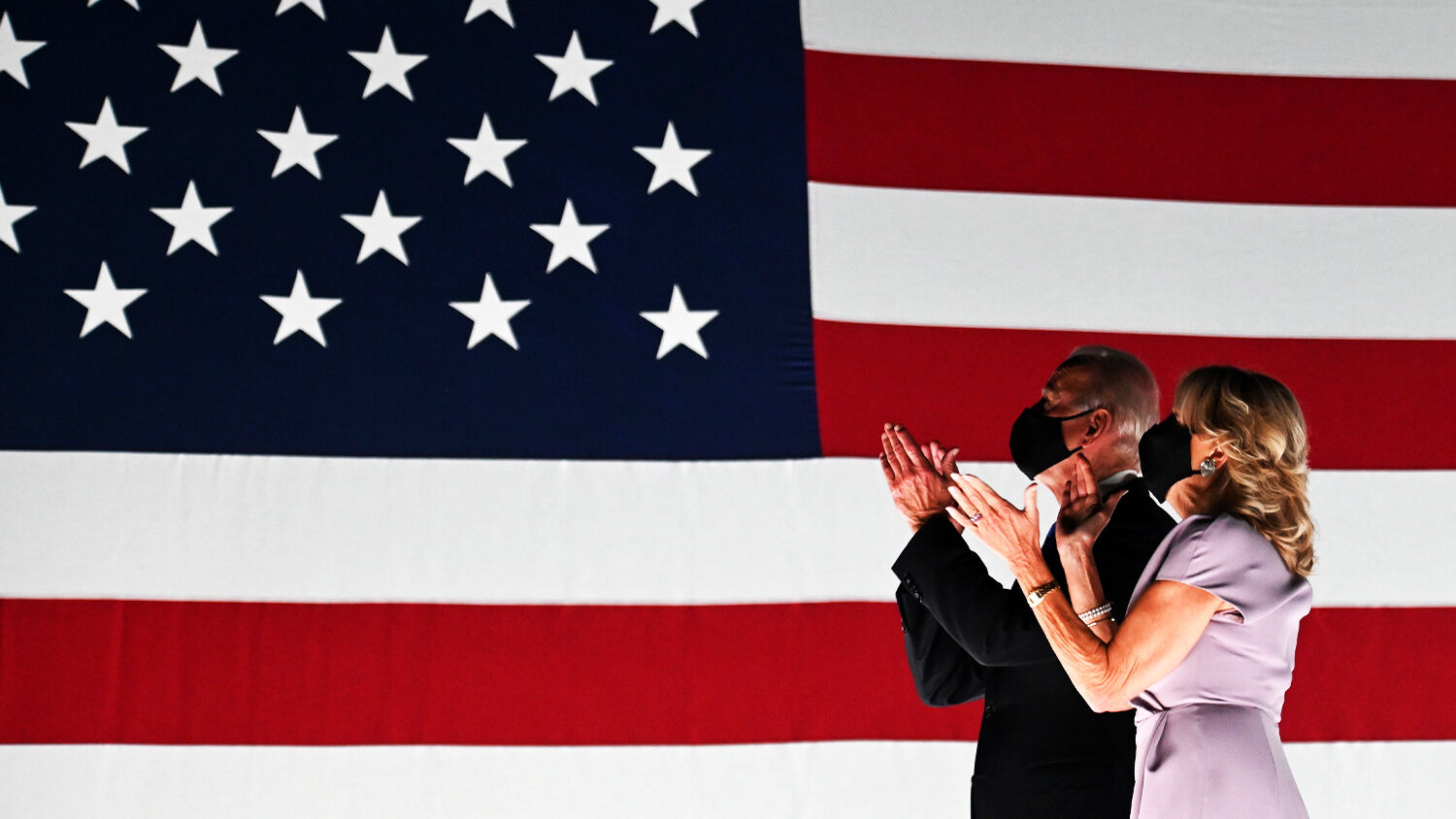 The Democratic Party hosted its national convention in Milwaukee, Wisconsin, from Monday to Thursday last week. For four evenings, the event hosted a line-up of mainly prerecorded messages from Democrats, and some Republicans, in support of presidential candidate Joe Biden. Viewership was small and the live crowds even smaller, but for those who cared to pay attention, the convention made it official: The Democratic Party and its would-be president and vice president are adopting socialism.

Former First Lady Michelle Obama’s opening speech dominated the first night of the convention. The theme of her 18 minutes was an attack on “the wrong president for our country,” Donald Trump, with little mention of Biden and no mention at all of vice presidential candidate Kamala Harris. This set the tone for the entire event. As Trumpet Daily Radio Show host Stephen Flurry put it in his August 20 program, the Democrats’ platform is “rabidly anti-Trump and, at best, … passively supportive of Joe Biden.” One adviser to the president summed it up this way: “You hear Donald Trump’s name at the Democratic Convention more than you hear Joe Biden.”

But the most important aspect of the 2020 Democratic National Convention was its coordinated promoting of radical-leftist ideology. Speaker of the House Nancy Pelosi and most if not all of those who addressed the convention referenced Black Lives Matter. Black Lives Matter publicly admits and aggressively promotes the radical Communist agenda. It helped spark and sustain the rioting, destruction, violence and death in American city streets this summer. Democrat Elizabeth Warren, perhaps America’s most radical-leftist senator, spoke from a classroom set in front of children’s letters spelling “BLM.” Hillary Clinton mentioned, “Yes, it still takes a village,” referring to her 1996 book and a Communist ideal. As the Black Lives Matter website states as its founding belief, “We disrupt the Western-prescribed nuclear family structure requirement by supporting each other as extended families and ‘villages’ that collectively care for one another, especially our children, to the degree that mothers, parents and children are comfortable.” The seemingly harmless phrase, especially in the Democratic Party and Black Lives Matter context in which she voiced it, supports the “disruption” of family itself.

One of the most radical speakers to appear at the convention was Linda Sarsour, an outspoken Muslim and former leader of the Women’s March protest that occurred the day after President Trump was inaugurated. Her public anti-Jewish comments resulted in her losing her stature and her position in Women’s March leadership, but Democratic Party leadership selected her to speak on the first night of the convention to the meeting of the Muslim Delegates and Allies Assembly. Sarsour said that the Democratic Party is “absolutely” the party for Muslim Americans.

Sarsour, whose parents were Palestinian immigrants to New York, supported the presidential campaign of Sen. Bernie Sanders, who openly admits to being socialist. In 2019, she said that Israel “is built on the idea that Jews are supreme to everyone else.” The Times of Israel reported that she supports the Boycott, Divestment, Sanctions economic attack on Israel and favors a “one-state solution” in which Muslims would wrest power over Israel from the Jewish people. Sarsour has said that Muslims should commit to a form of jihad, “not only abroad in the Middle East or on the other side of the world, but here, in these United States of America.”

After facing backlash over her appearance at the convention, a Biden campaign spokesman issued a statement distancing Biden from Sarsour’s beliefs and comments; however, her invitation to the convention speaks volumes about how radical the party is becoming.

This is not the first time something like this has happened. Earlier this month, Biden held a conference call with Muslim activists, in which he called for more teaching in school about the Islamic faith. He went on to quote the Prophet Mohammed: “Whomever among you sees a wrong, let him change it with his hand. If he is not able, then with his tongue. If he is not able, then with his heart.” Regarding these comments, Ayaan Hirsi Ali, a former Muslim and author of Heretic: Why Islam Needs a Reformation Now, said: “What he’s basically doing from that point onwards is enforcing Sharia law. And it is vigilantism on steroids. … I don’t know who put these words in his mouth, and I am alarmed.”

The majority of Biden’s viewers would not have picked up on the significance, but those raised on the Koran recognize that the candidate for the highest law enforcement position in America recognizes Islamic Sharia law as a legitimate replacement to American constitutional law. Ayaan said that Biden was more than likely ignorant of the true meaning of his comments, but someone in his party with a lot of control added it to his speech.

Little was seen of Joe Biden himself until the fourth and final night. His speech continued the convention’s ongoing theme of accusing Americans in general of racism. “This campaign isn’t just about winning votes. It’s about winning the heart, and yes, the soul of America. … Winning it for those communities who have known the injustice of a knee on the neck.” These kinds of references connect Biden to those who provoked the rioting that has taken place this summer and continue up to the present.

“One of the most powerful voices we hear in the country today is from our young people. They’re speaking to the inequity and injustice that has grown up in America,” Biden said. “The economic injustice; racial injustice; environmental injustice. I hear their voices. If you listen, you can hear them to. And where there’s existential threat posed by climate change, the daily fear of being gunned down in school, or the inability to get started in your first job, it will be the work of the next president to restore the promise of America to everyone.”

Biden’s reference to the young people fell right in line with former President Barack Obama’s comments from the night before: “To the young people who led us this summer, in so many ways, you are this country’s dreams fulfilled.” This was not a reference to respectful, lawful youths who spent the summer working, studying or volunteering, but to those who blockaded streets, smashed police cars, attacked officers and burned buildings.

This is the depth of the evil, corruption and deceit behind the Democratic Party. In “The Barack Obama Mystery,” Trumpet editor in chief Gerald Flurry wrote:

What motivates Barack Obama is a mystery to most analysts, but the Bible reveals this mystery. People need to understand what a dangerous threat this is to America’s very foundation! … We must be able to recognize the devil’s fingerprints on what was taking place here. In John 8:44, the Apostle John records the words of Jesus Christ to the Jews who were trying to kill Him: “Ye are of your father the devil, and the lusts of your father ye will do. He was a murderer from the beginning, and abode not in the truth, because there is no truth in him. When he speaketh a lie, he speaketh of his own: for he is a liar, and the father of it.” There is no truth in the devil—none at all! And the radical left lie like the devil. That is the spirit behind these people who will say and do anything to accomplish their goals. … The real culprit behind his efforts to “blot out Israel” is not a man! I am not blaming him—I am blaming Satan!

This is the spirit of radical Democrats, and at its national convention, the Democratic Party made it official.

So when Americans vote for Joe Biden, they are not voting for a moderate president, as he has tried to portray himself throughout his campaign. They are voting for a president and a party of a radical socialists. Socialists reject the American constitutional principle of minimizing government power and maximizing the power and accountability of the individual. They believe that the government must be empowered to make more of your decisions for you.

Had the radical left won in 2016, America as we know it would have already been destroyed. In “Saving America From the Radical Left—Temporarily,” Gerald Flurry wrote that “the nation only narrowly averted the destruction of the fundamental nature of the constitutional republic.” He continued:

You don’t have to know a lot about government to know that attempting to remove a lawfully elected president from office using unverified propaganda is treason of the highest level! Corrupt law enforcement officials, led by Barack Obama and with the help of Hillary Clinton, conspired to overthrow the government of the United States!

This attempt to remove a lawfully elected president is still underway. But God has used President Trump to save America—temporarily. He continued:

For eight years under President Obama, the forces of the radical left were on the march, virtually unchecked. … It is critical that we realize why this resurgence! God Himself is pushing back against the Satan-inspired forces that would have destroyed this nation! He is exposing those forces so we can see them clearly. And He is using a man to save the superpower of prophetic Israel, the United States—temporarily.

None of what the radical left did to America would have been exposed if President Trump hadn’t received and held on to his power. But Barack Obama’s Democratic Party is hard at work. It won eight years in power and succeeded in its effort to “fundamentally transform” America. Read what Mr. Flurry has written about how this will affect the future of Americans and people around the world in “America Has Been ‘Fundamentally Transformed.’”