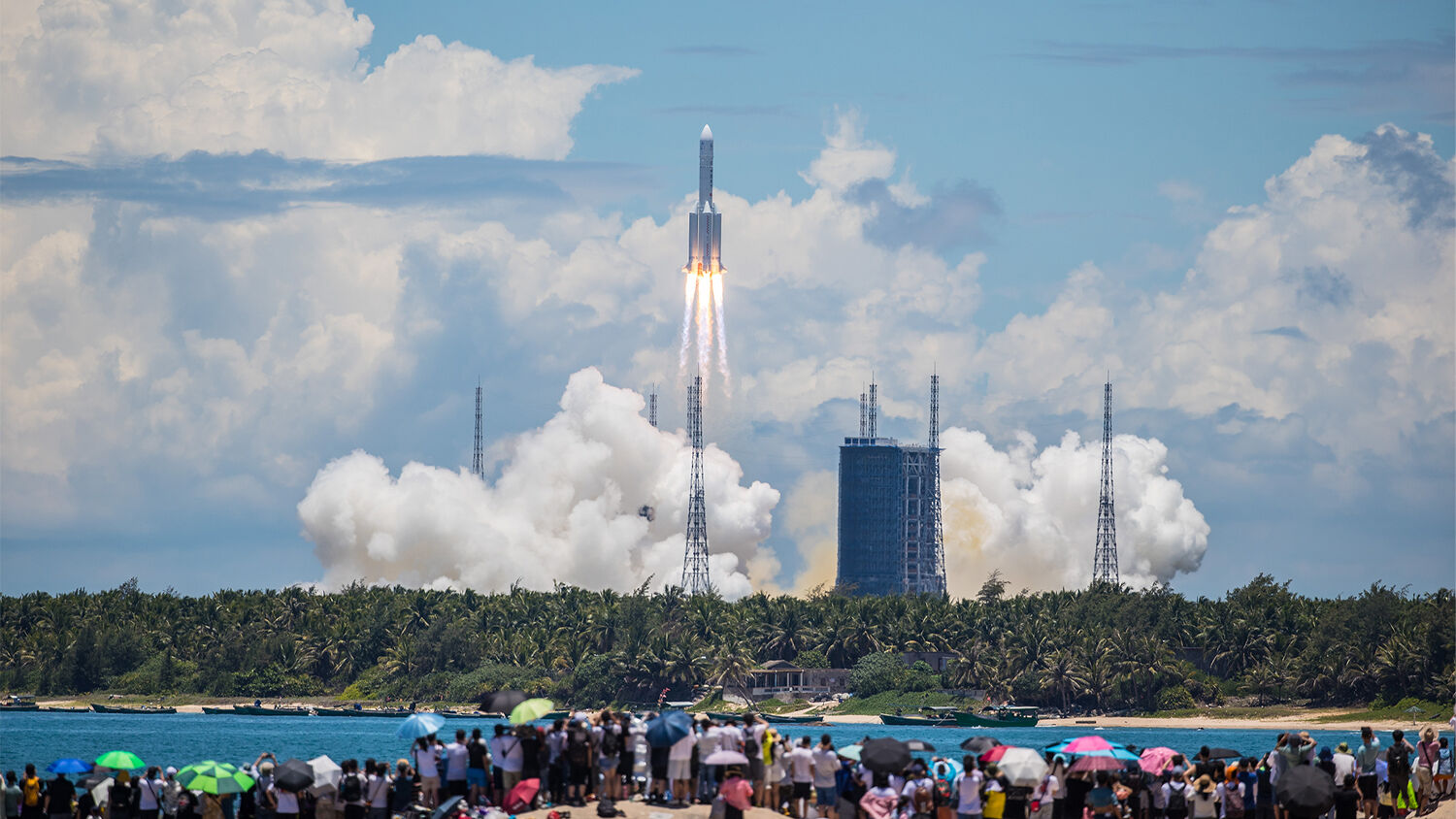 Don’t be fooled by another seemingly innocent science mission.

China launched its first independent mission to Mars on July 23 in the most advanced Mars mission ever undertaken. If the mission is successful, the probe should reach Mars’ gravitational field in February 2021 and will explore the planet for over three months. Meanwhile, nasa plans on launching its own advanced Mars mission this week. Is a new space race underway?

Nine years ago, China first attempted to send a probe to Mars in collaboration with Russia; however, the launch failed and the probe never left low-Earth orbit. Last week’s Tianwen-1 launch succeeded where the last probe failed; however, because the landing is the most difficult part of the mission, its success may not be known for another seven months. The United States is the only country so far to successfully land a probe on Mars.

China is one of three countries sending probes to Mars during this time period when Earth and Mars are at their closest. Less than a week before Beijing’s launch, the United Arab Emirates launched its Hope probe from Japan. It should also reach Mars in February; however, it will remain in orbit to study the planet’s atmosphere for 687 days. On July 30, the U.S. also plans to launch its Perseverance Mars mission.

The U.S. Mars 2020 mission’s main goal is to look for signs of ancient life, test for habitable conditions such as oxygen production, and bring soil and rock samples back to Earth. It is expected to land on Feb. 18, 2021, with the mission lasting at least one Mars year, or 687 days. Perseverance is very similar to previous rovers the U.S. has sent to Mars, but this rover contains more advanced scientific instruments. Perseverance will take samples of Mars’ surface; but since the technology is still being developed to bring the samples home, they are not expected to be retrieved until 2031. Scientists are speculating that this mission may provide the first evidence of alien life.

China’s Tianwen-1 aims to be the most advanced mission to Mars ever completed. Chinese scientists involved with the mission told the journal Nature Astronomy, “Tianwen-1 is going to orbit, land and release a rover all on the very first try, and coordinate observations with an orbiter. No planetary missions have ever been implemented in this way. If successful, it would signify a major technical breakthrough.” This mission is unique because the combination of an orbiter, lander and rover has never been used before.

Tianwen-1 forms part of China’s space strategy laid out in its April 2020 China National Development and Reform Commission to create an independent space infrastructure. The Diplomat wrote, “Once all is completed and demonstrated, China will work to offer an alternate credible space infrastructure to the world, thereby competing for global leadership in space.”

The technical challenges that the nasa and Chinese missions face are immense. The final seven minutes during landing will be the most difficult. However, it can take up to 40 minutes for communication between Mars and Earth, so the probe has advanced automation and the ability to make its own “decisions” based on scientific exploration and sensing its environment.

nasa has decades of experience in space, but China is catching up in many ways. This level of technical expertise not only allows for incredible scientific breakthroughs, it provides incredible militaristic advantage.

The last space race was a race for prestige—Russia and the U.S. competed to achieve the most impressive feat. For China, impressive feats are still important. But its main focus is on challenging the U.S.’s dominance of space militarily.

The militarized space threat China poses is one of the major reasons for the development of the Space Force as an independent branch of the U.S. military. The ceo of the United Launch Alliance, Tory Bruno, said that “this show of national prestige on Mars, I feel, is certainly connected to” what the Pentagon’s Defense Space Strategy report says is the weaponization of space to “reduce U.S. and allied military effectiveness and challenge our freedom of operation in space.”

Heritage Foundation Chinese aerospace expert Dean Cheng said, “The technology involved will have military implications because all space technology is dual use.” Cheng warned that “space technology, more than almost any other technology, is extremely fungible”—meaning interchangeable or readily able to adapt.

The technology used and the lessons learned from its Mars mission will aid China’s space military. “China views space as reflecting multiple pieces of what they term comprehensive national power,” Cheng continued. “Space touches on economic capability; it touches on military capability; it has impact on diplomacy, on internal political unity. It’s a wonderful advertisement for Chinese levels of science and technology.”

China is becoming a major threat to America’s hegemony in space. Since the end of World War ii, the U.S. has been the world’s sole superpower. The Soviet Union attempted to threaten its position, and the U.S. took it down through its Star Wars space program. But can America succeed a second time around? And against such a technologically advanced nation?

In The United States and Britain in Prophecy, Herbert W. Armstrong explained the prophesied rise of these two nations (request your free copy). In Genesis 48, the patriarch Israel (formerly called Jacob) transferred the birthright blessings onto Joseph’s sons Ephraim and Manasseh. Ephraim, the younger brother, would become “a multitude of nations”—the British Empire. Manasseh would also “become a people, and he also shall be great”—the United States.

Leviticus 26 and Deuteronomy 28 describe these blessings, which led to the powerful British Empire, and then the rise of America as the greatest single power ever in history. It is these blessings that allowed America to dominate space. Yet these blessings are now being taken away.

Mr. Armstrong wrote, “You need, now, to understand the remainder of this prophecy of Leviticus 26—and also of Deuteronomy 28—and the many other prophecies relating to them and events soon to violently affect your life!”

The latter halfs of Leviticus 26 and Deuteronomy 28 detail the fall of Britain and America. This is what we are witnessing right now.

You need to wake up to the fact that the United States, even still possessing unmatched power, is afraid—fears—to use it, just as God said: “I will break the pride of your power”; that the United States has stopped winning wars—that America was unable, with all its vast power, to conquer little North Vietnam! The United States is fast riding to the greatest fall that ever befell any nation!

America is falling fast. This is what we are seeing right now. Even as the United States still holds significant power, it is much more vulnerable than ever before. China is conducting missions in space that have never been attempted before. America is rapidly losing its “unmatched power.”

And the prophecies get even more specific: “They have blown the trumpet, even to make all ready; but none goeth to the battle: for my wrath is upon all the multitude thereof” (Ezekiel 7:14).

Regarding this scripture, Trumpet editor in chief Gerald Flurry wrote, “The trumpet of war was blown in Israel—mainly America and Britain. It seems everybody was expecting our people to go into battle. But the greatest tragedy imaginable occurred! Nobody went to battle—even though the trumpet was blown!” He wrote that America’s reliance on technology, including space technology, could be its Achilles’ heel. If China has the ability to land on Mars, it also has the technological capability to devastate American infrastructure. Should a nation wipe out U.S. satellites, America’s military would effectively be blinded. Within seconds, the world’s greatest military superpower would be paralyzed.

This is the state that America has reached today. Its position as the world’s sole superpower is being increasingly threatened with each passing day. And its fall is prophesied. To understand the prophecies surrounding the fall of America, read Mr. Armstrong’s free book The United States and Britain in Prophecy. For more information on the prophecies about the rise of China, please read our free booklet Russia and China in Prophecy.