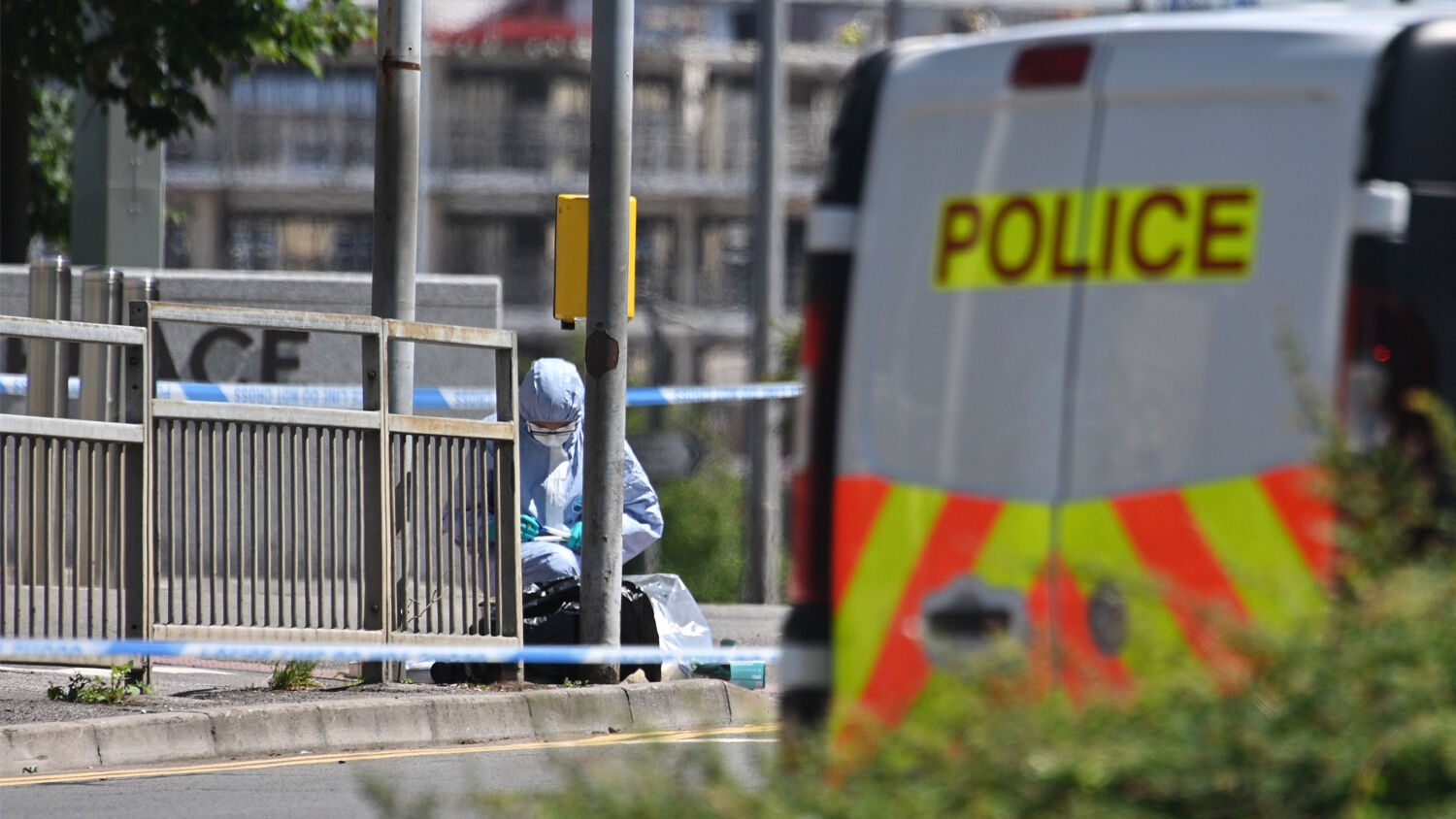 A forensic officer is seen outside Forbury Gardens on June 22.
Leon Neal/Getty Images

The UK is rocked by another terrorist attack.

Three people were stabbed to death in a park in Reading, England, on Saturday in what authorities are treating as a terrorist attack.

Eyewitnesses saw the suspect enter Forbury Gardens at about 7 p.m. on Saturday. He is said to have shouted something “unintelligible” before stabbing individuals from two groups sitting together on the grass. Three were injured in the attack and another three died in the rampage. The victims were American Joe Ritchie-Bennett who had been living in the UK for 15 years, history teacher James Furlong and scientist David Wails.

The suspect, 25-year-old Libyan Khairi Saadallah, was arrested at the scene. While the motive behind the stabbings is still unknown, it has been labeled a terrorist attack by police. Saadallah had been investigated by MI5 less than a year ago after they were informed that he intended to return to Libya to join a militant jihadist group. However, MI5 found no evidence to substantiate the claim and closed the investigation two months later.

Friends of Saadallah report that he boasted of being a child soldier in his homeland and had fought to overthrow former Prime Minister Muammar Qadhafi. He escaped the civil war in 2012, coming to the United Kingdom as an illegal immigrant. Because the UK does not deport Libyans due to human rights issues, Saadallah was granted asylum in 2018. A cousin says that since Saadallah came to the UK, he converted to Christianity and left behind his Islamic past.

The Telegraph reported, however, that when Saadallah arrived in the UK he moved to Manchester “and former neighbors in Reading suggested he moved in the same circles as Salman Abedi, who carried out the Manchester attack” in 2017.

Just over two weeks before the attack, Saadallah had been released early from prison for non-terrorist related offenses. As a drug addict, Saadallah suffered from serious mental health problems and admitted to hearing voices. Those who knew him said these mental conditions were exacerbated by the coronavirus lockdown.

The ongoing investigation has police seeking evidence to understand Saadallah’s motives and why he was not under surveillance. The attack has increased fear throughout the nation as authorities warn the public to remain vigilant with the possibility of more “lone wolf” attacks. The UK terror threat level remains at “substantial,” meaning that an attack is “likely.”

MI5 currently has 43,000 people on its list of individuals who could pose a terror threat to the UK. That number has doubled over the same period last year and includes 3,000 “subjects of interest” that authorities deem as a serious security risk to the country.

With these kinds of numbers on security agency’s radar, as well as the tens of thousands of illegal immigrants who enter the UK every year, the terror threat is growing.

God warned it would be this way for the nations of Israel in the time right before Jesus Christ returns. In his free book The United States and Britain in Prophecy, Herbert W. Armstrong proved that the nations of ancient Israel are primarily comprised of America, Britain and the Jewish nation of Israel today.

In Isaiah 1, God prophesied the condition of these nations in the end-time. Verse 7 says, “Your country is desolate, your cities are burned with fire: your land, strangers devour it in your presence, and it is desolate, as overthrown by strangers.”

In recent weeks, the Trumpet has focused on the fulfillment of the first half of this verse—“your cities are burned with fire”—as race riots tear apart U.S. cities.

With this weekend’s attack in Reading, the second half of this verse comes into clear view: “your land, strangers devour it in your presence, and it is desolate, as overthrown by strangers.” God says that our nations would be overthrown by “strangers.” This means foreigners, or non-Israelites—men like Saadallah.

This is a terrifying passage! Because of the sin these nations are laden with, and because of the weakness of our leaders, we will experience desolation and burning—all at the hands of “strangers.” In other words, race riots and terrorism are going to get much worse.

We see race riots and terrorism throughout the nations of Israel. And it is only going to grow worse.

Why does God allow this to happen? Because Israel has become a “sinful nation” and “laden with iniquities” (verse 4). Israel was the one nation that had a history with God, but it rejected Him. Because of its sins, God is rejecting Israel. He specifically mentions some of these sins. In verses 9-10, God mentions Sodom and Gomorrah, two cities that were wiped out for their sexual immorality and perversion. And we have become even worse than those cities today.

Only by God’s mercy will our nations not be totally leveled as Sodom and Gomorrah were anciently. A small remnant will remain to rebuild God’s way. For a more thorough explanation of the state of our nations today, and why a merciful God is allowing these things to happen, read Chapter 4 of Ezekiel—The End-Time Prophet.