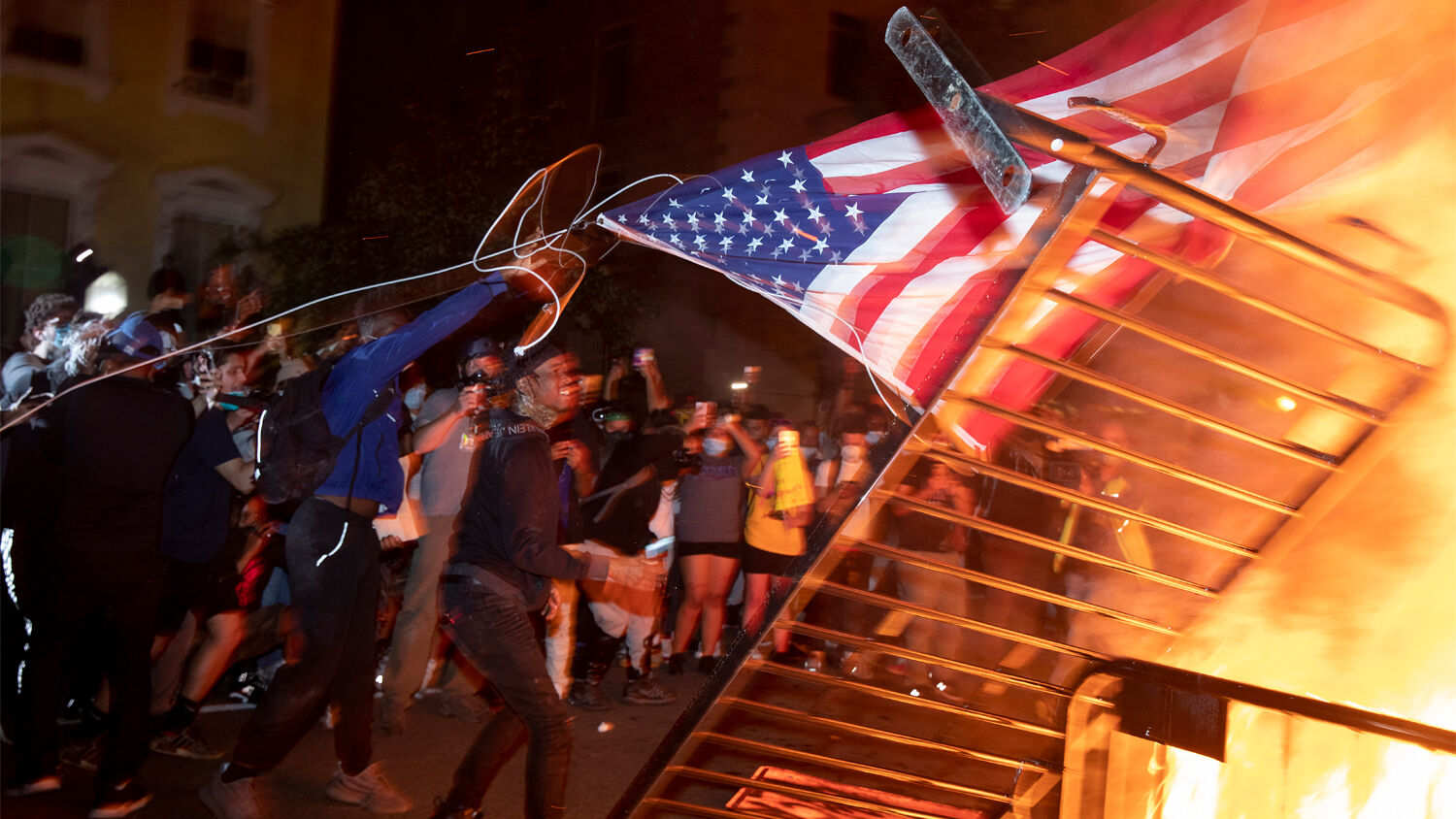 Police work to keep demonstrators back during a protest on May 31 in Washington, D.C.
Tasos Katopodis/Getty Images

The United States is reeling in the aftermath of violent and destructive Black Lives Matter protests that have exploded this month. According to a Rasmussen Reports national telephone and online survey, many believe the only change to come out of the carnage is a second civil war.

Key protest leaders, especially Black Lives Matter activists, claim that the protests are about fighting for positive change and justice for black people in American society. However, very few are optimistic that this will bring any positive change. Rasmussen Reports found that “[b]lacks are the least optimistic that the protests will lead to positive change.” Thirty-seven percent of voters believe the current protests will lead to “long-term, meaningful racial change in America”; 31 percent disagree, and another 32 percent are not sure.

In the survey of 1,000 likely U.S. voters, 34 percent believe that it is likely the U.S. will experience another civil war within the next five years. However, only 9 percent of these respondents believe a second civil war is “very likely.” Republicans were more likely than Democrats to expect a civil war in the near future.

With the country so heavily divided on whether the protests will bring positive or lasting change, and with a growing number believing that it is leading to civil war, the survey results reveal the depth of division in the U.S. And it doesn’t just run along racial lines.

Earlier this year, while impeachment hearings against President Donald Trump were underway, the political division among America’s citizens again boiled to the surface. At a Trump rally at the time, one Trump supporter was asked if he were confident that the president would not be removed from office. His response: “My .357 Magnum is comfortable with that.” Another supporter warned that if Mr. Trump were removed it would “cause physical violence” not “seen since the first Civil War. I think it would become the second civil war.”

The division in this country runs deep, and people are preparing for physical violence. Before the current protests started, the country experienced a massive surge in gun sales. March saw the highest record month of Federal Bureau of Investigation background checks since tracking began in 1998. April experienced a 70 percent gain over the same period last year. May saw an increase of 75 percent from May 2019. And the those numbers continue to soar as the protests continue.

America owns 40 percent of all guns in the world: more than 390 million guns, which is more than 120 per 100 people. And those were the numbers from 2018. What are the numbers like now after the tumultuous beginning to 2020?

Of likely voters polled by Rasmussen Reports, 39 percent believe removing “Confederate symbols, names and monuments throughout the country honoring those who fought in the first Civil War will help race relations”; 27 percent disagree. This is a large portion of the population that believes it is better to erase its history. And this number is primarily comprised of young people—the leaders of tomorrow.

When we do not learn from history, we are destined to repeat it. This is “the law of history.” As the nation tears down its statues and destroys its history, it is edging closer to repeating it. And civil war is coming again.

In Isaiah 1:4-5, God describes the nations of Israel—primarily Britain and America—as being “laden with iniquity.” And where has all this sin left these nations? They are full of “wounds, and bruises, and putrifying sores” (verse 6). Deep division is festering in this country like a putrefying sore. And because it has not been addressed, it has “not been closed, neither bound up, neither mollified with ointment,” the infection has spread through the entire country. It will spread until it can no longer be ignored. “Your country is desolate, your cities are burned with fire” (verse 7). Today’s race riots are leading to civil war.

This is a terrifying passage! Because of the sin these nations are laden with, and because of the weakness of our leaders, we will experience desolation and burning …. In other words, race riots and terrorism are going to get much worse.

Race riots will worsen until “your cities are burned with fire.” What we are seeing right now is only the beginning of utter destruction. To learn more about what is ahead, please read “Race Riots Were Prophesied!”