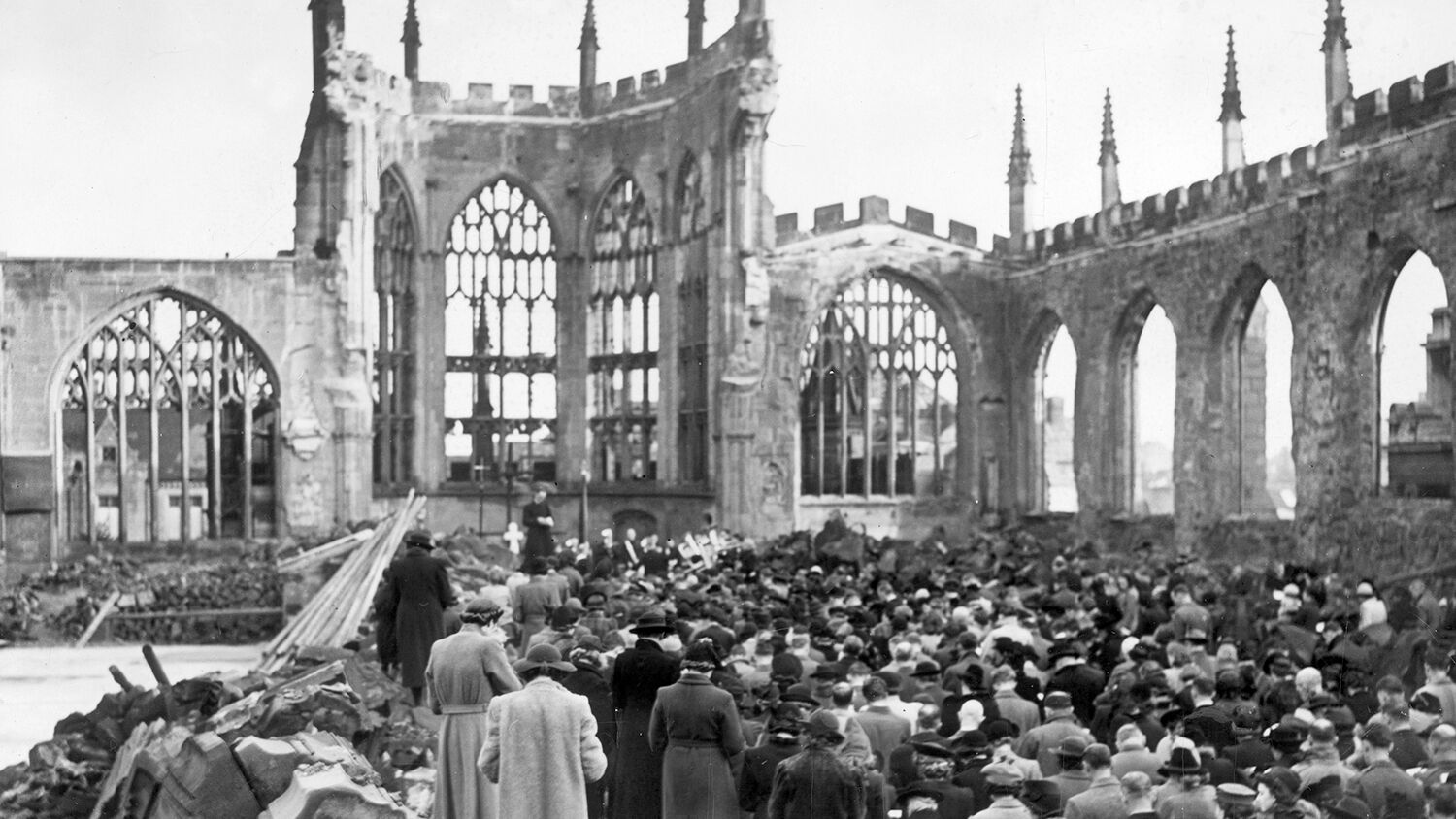 Worshipers gather for a remembrance service in Coventry Cathedral after it was destroyed by the German Luftwaffe on Nov. 15, 1942.
Mirrorpix/Getty Images

Why did the Allies win World War ii? Bad decisions by Adolf Hitler? Stubborn resistance from Winston Churchill’s Britain? Endurance from Russia? The massive industrial might of the United States?

All these factors played their role. But the most critical reason is airbrushed out of the history books.

Britain held a total of seven days of prayer during World War ii. The first came days after Winston Churchill became prime minister, and the last on April 23, 1944, in anticipation of D-Day.

The nation heavily invested in these days. On the first, May 26, 1940, shops closed as the Church of England, the Catholic Church, Jews and other religions appealed to God for help. The Times described how the King and Queen attended services at Westminster Abby, with Queen Wilhelmina of the Netherlands, along with the prime minister and all the leaders of Britain. “In the cities and towns, leaders of civic life attended church on this Day of National Prayer at the head of their people,” the Times wrote. “From peaceful village churches in the remote countryside the same prayers were offered, just as in these fateful hours the same thoughts are in people’s minds.” Afterward, the archbishop of Canterbury called on everyone to pause at noon every day and pray for deliverance. Newspapers even gave advice on how to pray!

“It is well for us to show the world that we still believe in divine guidance; in the laws of Christianity may we find inspiration and faith from this solemn day,” declared British Pathé—the newsreel then shown in cinemas.

Similar news coverage continued for other days of prayer. “Look back through history and find how the people of this land of ours have always committed their cause to Almighty God,” stated the news announcer as the Royal Air Force lined up to beseech God’s help in 1942. “These are modern crusaders who are not ashamed to pray.”

America responded to the war in the same way. On D-Day, the president exhorted the whole nation to join him in prayer. Stores closed early. One department store chain, Lord & Taylor, closed completely: Its president sent his 3,000 employees home to pray.

In its lead editorial, the New York Times wrote: “We pray for the boys we know and for millions of unknown boys who are equally a part of us. … We pray for our country. … The cause prays for itself, for it is the cause of the God who created man free and equal.”

American historian Stephen E. Ambrose wrote in his book D-Day: “The impulse to pray was overwhelming. Many people got their first word of the invasion as they began their daily routines; after they recovered their breath, they said a silent prayer. Others heard the news broadcast on loudspeakers during their night shifts on assembly lines around the country. Men and women paused over their machines, prayed, and returned to work with renewed dedication. Across the United States and Canada, from the Atlantic to the Pacific, from the Arctic to the Gulf Coast, the church bells rang. Not in triumph or celebration but as a solemn reminder of national unity and a call to formal prayer. Special services were held in every church and synagogue in the land. Pews were jammed with worshipers.”

What was the result of these prayers?

After the prayers for Dunkirk, 335,000 men were rescued from the shores of France; the government expected only up to 45,000 to be saved. The Daily Telegraph wrote on July 8, 1940, “Those who are accustomed to the Channel testify to the strangeness of this calm; they are deeply impressed by the phenomenon of nature by which it became possible for tiny craft to go back and forth in safety.” People at the time could see that this “strangeness” was nothing short of a miracle from God.

“The fortitude displayed and the success achieved are to me, at least, miracles and an answer to the prayers which rose up from the Empire, and from millions outside it on May 26. Let us not forget to return thanks,” read one letter to the Times.

“Surely our prayers have been answered in the merciful deliverance of our Expeditionary Force from complete destruction?” another letter said. “Thanksgiving is surely as important as supplication, and there must be many who feel, like myself, that we ought to have a special day of thanksgiving to God for His wonderful answer to our prayers.”

The Times wrote that these letters “are two out of a very large number addressed to the Times in the same sense.”

On June 9, Britain went back to church for a national day of thanksgiving. “One thing can be certain about tomorrow’s thanksgiving in our churches,” wrote the Telegraph. “From none will the thanks ascend with greater sincerity or deeper fervor than from the officers and men who have seen the hand of God, powerful to save, delivering them from the hands of a mighty foe, who, humanly speaking, had them utterly at his mercy.”

Time magazine also spotted the connection, noting that just five days after the nation’s first day of prayer, the Army was rescued, and that similar miracles followed the second.

Britain’s second and third day of prayer came during the Battle of Britain, when the German Air Force tried to clear the way for a Nazi invasion. Britain won the battle, and Air Chief Marshall Hugh Dowding said: “I will say with absolute conviction that I can trace the intervention of God. … Humanly speaking, victory was impossible!”

After D-Day, the senior Allied commanders all gave thanks to God. “If there were nothing else in my life to prove the existence of an almighty and merciful God, the events of the next 24 hours did it,” said Gen. Dwight D. Eisenhower.

“Such a historic march of events can seldom have taken place in such a short space of time,” wrote Field Marshall Bernard Montgomery. “Let us say to each other, This was the Lord’s doing, and it is marvelous in our eyes.”

Lt. Gen. Sir Frederick Morgan, who did most of the planning for D-Day as chief of staff to the supreme Allied commander, wrote an article for the Telegraph after the war titled “The Miracle of D-Day.”

“And miracles happen still,” he wrote. “How many of them have we not seen enacted before our eyes in these past few years.”

He was on the scene at D-Day. “There were many others who, like us, saw no way out barring a miracle. There came a miracle.”

He described the way the weather changed miraculously before the Allied landings in North Africa. “The history of our other theaters of war will inevitably tell of many similar happenings, but I doubt if any will be such as to compare with the miracle of D-Day in 1944,” he wrote.

In response to this deliverance, the British government even took steps to make the nation more religious. The 1944 Education Act required all schools to hold a daily act of collective worship.

On V-E Day, King George vi told the nation, “We give thanks to God for a great deliverance.” U.S. President Harry Truman appointed May 13 as a day of prayer, saying: “I call upon the people of the United States, whatever their faith, to unite in offering joyful thanks to God for the victory we have won and to pray that He will support us to the end of our present struggle and guide us into the way of peace.”

These are not insignificant individuals calling for prayer and then acknowledging the results. Just about all of the top British and American leaders were involved. Yet you hear nothing about this when World War ii is taught today.

You would have thought that even an atheist would have recorded some details of these days of prayers. From a purely academic, historical point of view, it would be important to know that Allied leaders believed that God was on their side, sought His help, and credited Him with their victories. But instead, they’re almost never mentioned; God and the Bible are left out.

With a full account of this history, V-E Day could be an annual reminder of our need for God—nationally and individually. Even without cracking open your Bible, an honest look at history gives you a profound education.

A great place to see God’s role in history is in our free book The United States and Britain in Prophecy, by Herbert W. Armstrong. It shows God’s plan in world events. It explains what God has been doing throughout man’s history, and what He will do today. It will show you specific prophecies that were fulfilled during World War ii. This book brings history and the Bible together, and makes them both come alive.