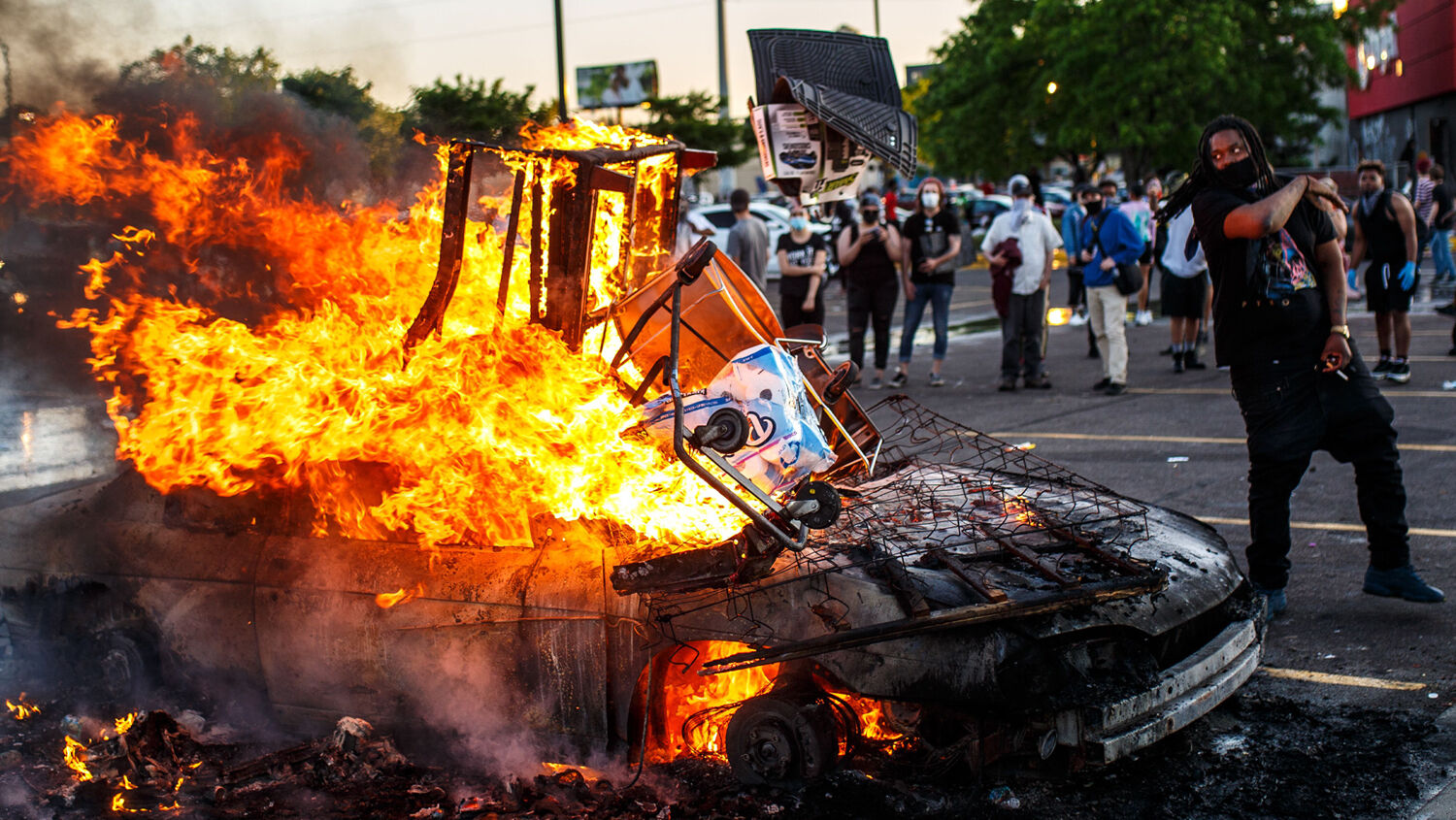 Protesters burn a car and other goods outside a Target store near the Third Police Precinct on May 28 in Minneapolis, Minnesota, during riots sparked by the death of George Floyd.
AFP/Getty Images

Justice for George Floyd. Is that what this is?

Tens of thousands of people streaming into the streets, picking up whatever is lying around, smashing squad car windshields, breaking whatever store windows are nearby, going inside on a whim, seizing whatever is close, taking it home, coming back out with megaphones and improvised weapons, setting buildings on fire, pulling guns out of nowhere. Beating people. Killing people.

Justice for George Floyd. Is that what this is?

In Washington, D.C., angry protesters attempted to storm the White House grounds. Fifty Secret Service agents were injured in the clashes. Fifty! Fires blazed outside the president’s residence at Lafayette Park and St. John’s Episcopal Church. According to multiple reports, the president of the United States had to be whisked away into the White House underground bunker.

Justice for George Floyd! Is that what this is?

On Friday, the officer in question was arrested and charged with third-degree murder and manslaughter. He will face his day in court, and facts are still emerging. America’s justice system is designed to protect the public while also providing the accused with a fair hearing. However, in this and other similar recent cases, the public has already announced its verdict and is now, as a mob, exacting its sentence—not against the accused but against anything they deem representative of “the system” he came from.

Law enforcement officials must be respected for the law they uphold and the crime and anarchy they protect us from. When they abuse their trust and power and break that law themselves, they must be held accountable.

But the smashing, stealing, burning, looting, rioting, throwing, kicking, punching, shooting and killing? Is that holding law enforcement accountable to the law? Is that to advocate, of all things, justice? Or are people using George Floyd for their own agendas?

The undeniable truth is that Floyd’s tragic death is being used by anarchists and revolutionists, including many radical left-wing commentators and politicians, to attack the founding institutions of the United States of America and the presidency of Donald J. Trump.

And these attacks are prophesied to have alarming success at toppling those founding institutions—and the nation they uphold!

Your Bible prophesies that our “cities are burned with fire” (Isaiah 1:7). As my father explains in his 2013 booklet America Under Attack, this passage in Isaiah is talking about “massive RACE WARS swallowing up our cities!” Look around. Crowds denouncing violence are committing violence on a mass scale!

God issued a similar warning through the Prophet Ezekiel: “Make a chain: for the land is full of bloody crimes, and the city is full of violence. … Destruction cometh; and they shall seek peace, and there shall be none” (Ezekiel 7:23, 25).

A lot of Christians don’t realize it, but Jesus Christ was also a prophet. He prophesied that the last days before His Second Coming would be just like the last days before the Flood (Luke 17:26). If you believe Jesus, you have to believe this prophecy: It came straight from Him!

What was human society like during the time period Jesus emphasized? “God saw that the wickedness of man was great in the earth, and that every imagination of the thoughts of his heart was only evil continually” (Genesis 6:5). It was “corrupt,” “corrupt,” “corrupt” (verses 11-12). The evil and immorality filled the Earth with violence. That universal sin soon led to universal destruction.

Today, we have multiplied our evil and corruption. Our nation is filled with violence. Our cities are burned with fire.

Jesus was right. The world is again descending into violence. We are witnessing the fulfillment of a prophecy of Jesus Christ!

As our nation burns, the only way to find hope is to understand who Jesus Christ really was and what the Bible really says about our generation and what is about to happen. We looked much more deeply at the prophetic significance of the sobering events that have unfolded over this past week in my radio program today, “Anarchy in the Name of George Floyd.” Please listen, and e-mail me your thoughts.