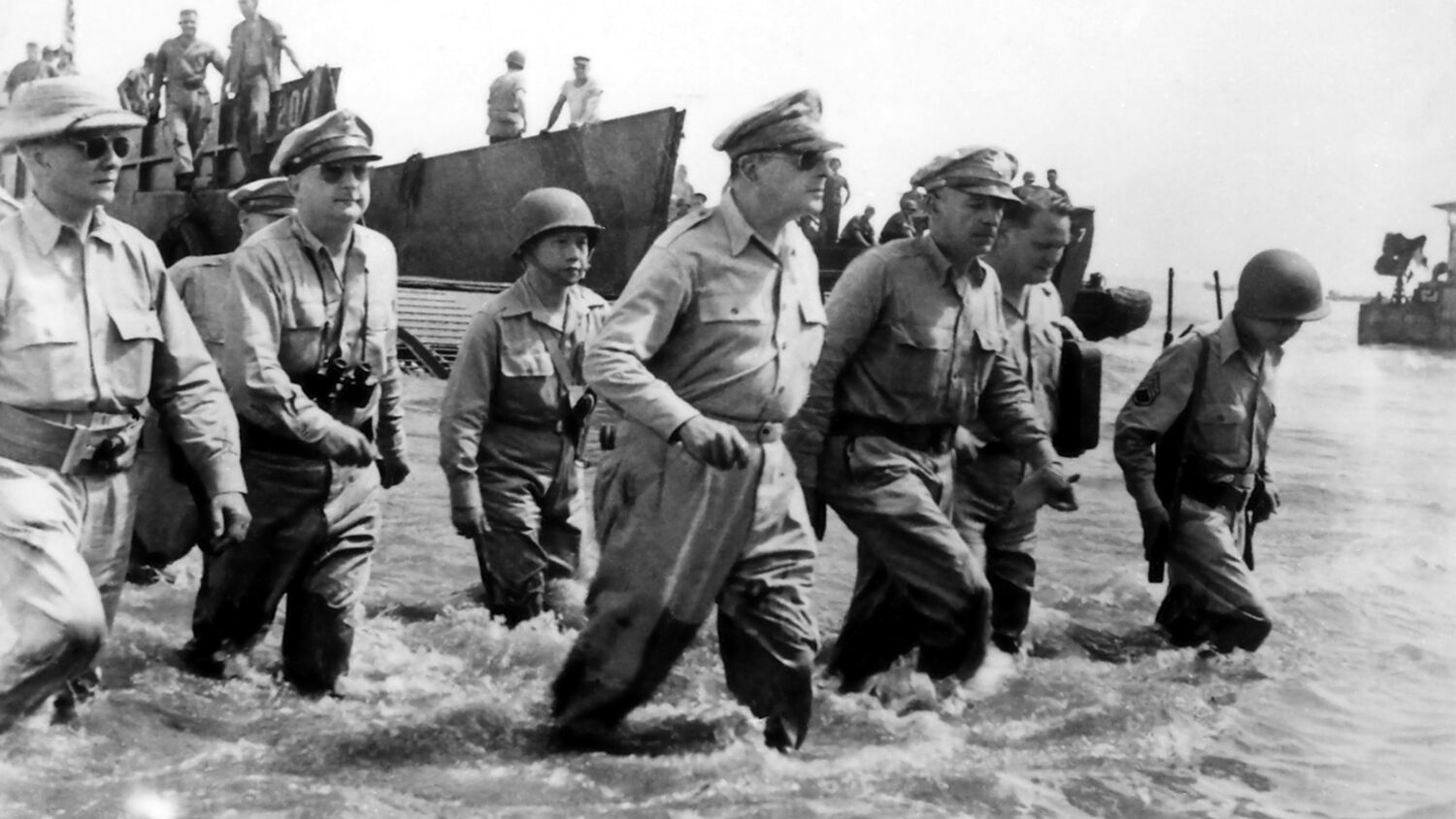 Sunday was commencement here at Herbert W. Armstrong College. Hundreds of people (socially distanced in every other row) came to Armstrong Auditorium to celebrate the achievements and the futures of 23 sophomores and 23 seniors. I was privileged to give the commencement address.

Today I thought I’d share with you what I shared with them: the material that makes a Christian soldier.

Douglas MacArthur was one of America’s greatest soldiers. How did he become great, and what can we learn from him?

As a young boy, MacArthur dreamed of following in the steps of his famous father, an army captain who won the Congressional Medal of Honor for his heroism during the Civil War. His mother told him, “You must grow up to be a great man—like your father and Robert E. Lee.” When Douglas was 13, he overheard his father say to her, “I think there is the material of a soldier in that boy.” He never forgot that remark. William Manchester wrote, “No adolescent rebellion for him; all his life he would seek to be a man-at-arms in whom his father could have exulted.”

Douglas excelled at sports and academics, but when he graduated high school in 1897, he was denied entry to the United States Military Academy at West Point, New York. He did not receive the presidential appointment he needed, and he also failed his preliminary physical examination due to curvature of the spine. But there was indeed material of a soldier in this young man: He moved with his mother to a district in Wisconsin where they knew the congressman and immediately set out to correct the spinal defect with the help of a specialist, whom he worked with an entire year! He was determined not to be denied West Point in 1899. The doctor said of him, “He was one of the quickest fellows to obey orders I have ever treated. He was tremendously interested in anatomy, biology, physiology and everything that concerned health and medical science.”

Meanwhile, Douglas also worked with his mother as well as a tutor to prepare for a contest in his congressional district, walking two miles every day to study. He said he never worked harder in his life. The night before the contest he had trouble sleeping. His mother told him that day: “Doug, you’ll win if you don’t lose your nerve. You must believe in yourself.”

When the results were announced, placing first—by far—out of the 13 applicants was Douglas MacArthur. “It was a lesson I never forgot,” he said. “Preparedness is the key to success and victory.” He was going to West Point—because he had absolutely out-worked the competition!

At West Point too, he outworked the competition, enduring hazing, meeting the rigors of his training, making the baseball team, rising from corporal to first sergeant to first captain, and graduating with one of the highest academic scores in the history of the institution.

This is how MacArthur spent his years after college. Then after the Great War was over, it was superintendency of West Point, commands in the Philippines and stateside, Army chief of staff, major general, field marshal, even the presidency of the American Olympic Committee. In several of his posts, he was the youngest man ever to be appointed.

This is all before what he is most famous for: command of United States Army Forces in the Far East during World War ii.

Early on in the war, after a humiliating defeat in the Philippines, MacArthur made a daring escape to Australia. Before his escape, he famously vowed, “I shall return.”

Three years later, he returned triumphantly to liberate the Philippines and lead the Allies to victory. MacArthur presided over Japan’s surrender in 1945 and its reconstruction to a peaceful state.

At the start of the Korean War in 1950, the 70-year-old commander was chosen to lead coalition forces against the Communist-backed incursion on the Korean peninsula. MacArthur pushed for bold, aggressive action in order to stop the spread of communism.

In Washington, President Harry Truman favored a much more limited war. This led to an epic clash between the commander in chief and America’s most decorated and beloved five-star general. Truman removed MacArthur from his command, but the larger-than-life general still returned home to a hero’s welcome.

Douglas MacArthur’s farewell address is truly one of the great orations in American history. His entire life—52 years of it serving his country in uniform—had been a preparation for this singular moment. As MacArthur spoke before the assembled Congress on April 19, 1951, an enthralled nation listened to his words with unconcealed emotion. Americans everywhere were gripped by the power, soundness and sincerity of his words.

During his address, MacArthur said that he had been accused of being a warmonger, which was not true at all. MacArthur hated war. Nothing, he said, is more revolting than war.

“But once war is forced upon us, there is no other alternative than to apply every available means to bring it to a swift end. War’s very object is victory, not prolonged indecision,” he said.

One of the great lessons in warfare, he said, is that appeasement begets new and bloodier war. And he uttered this unforgettable statement: “In war there is no substitute for victory.”

We are all in a spiritual war, against Satan, society and even sin inside ourselves.

There is no substitute for victory.

The Bible describes our present world as evil (Galatians 1:4). It says the whole world is deceived (Revelation 12:9) and that its god is actually Satan (2 Corinthians 4:4). Ephesians 2:2 identifies him as “the prince of the power of the air.” He broadcasts into minds his propaganda: selfishness, vengefulness, impulsiveness, recklessness, negativity, deception, violence.

He is the real enemy.

God absolutely hates war. He is certainly not a warmonger. But in this present evil world, with Satan as its god, spiritual war is absolutely necessary! This is why the Bible describes true Christians as good soldiers of Jesus Christ (2 Timothy 2:3). We are God’s army. Our Commander in Chief orders us to put on the whole armor of God, fight the good fight of faith, war a good warfare, conquer the adversary, forsake the ways of this world, crucify our carnal natures and destroy the body of sin (see Ephesians 6; 1 Timothy 6:12; 1:18; Romans 6:6).

This is the language of the New Testament! Christianity in today’s world is war. God has drafted our graduates and all true Christians to be good soldiers. And in this spiritual war, there is no substitute for victory.

Our graduates have a crucial post in this good fight. God has equipped them with all the instructions and training they need to be victorious in the battles ahead. He will lead them and will lead you to victory, if you trust not in yourself but in Him. You will conquer if you follow His command.

During that historic farewell address, MacArthur referred back to comments he had made in 1945, following the Japanese surrender on the battleship Missouri:

Men since the beginning of time have sought peace. … Military alliances, balances of power, leagues of nations, all in turn failed, leaving the only path to be by way of the crucible of war. The utter destructiveness of war now blocks this alternative. We have had our last chance. If we will not devise some greater and more equitable system, our “Armageddon” will be at our door.

What a spiritual perspective! He never learned the depth of the Bible, as Armstrong “cadets” do, but he read from his Bible every day! He dealt with the problems, the welfare, the lives of hundreds, thousands, millions. He knew that there was something that human beings have to address that goes far beyond economics or politics or traditions or even religions. Although he didn’t really understand it, he glimpsed the spiritual war. He understood that unless the dangerous trend of world events was reversed, human civilization was headed for catastrophe!

The problem basically is theological and involves a spiritual recrudescence and improvement of human character that will synchronize with our almost matchless advances in science, art, literature and all the material and cultural developments of the past 2,000 years. It must be of the spirit if we are to save the flesh.

Listen to one of America’s greatest warriors! We must change our very natures. It must be of the spirit if we are to save the flesh.

He said we must devise a better system. Yet nearly 6,000 years of evidence all proves that we are totally incapable of effecting this necessary change in human nature.

This reality underscores the tremendous importance of God’s college in fulfilling God’s purpose!

Students here learn Jeremiah 17:9: “The heart is deceitful above all things, and desperately wicked: who can know it?” They learn not to try to devise solutions themselves. They learn that the premise of modern education, that human nature is fundamentally sensible and good, is wrong.

True education is learning to see human nature for what it really is, irrecoverably weakened, compromised and infiltrated by the enemy! We must realize that our very nature is evil, or we will never solve our many problems.

“Blessed is the man that trusteth in the Lord, and whose hope the Lord is. For he shall be as a tree planted by the waters, and that spreadeth out her roots by the river, and shall not see when heat cometh, but her leaf shall be green; and shall not be careful in the year of drought, neither shall cease from yielding fruit” (verses 7-8).

Those who trust in God bear fruit. They are like growing trees planted by the waters.

Wars fought by MacArthur and the other warriors of the ages have consumed innumerable lives. But when you understand true education, you understand that even death is not the final chapter in a person’s life. The unfolding drama in God’s plan actually ends not in death but in victory.

“Old soldiers never die, they just fade away,” MacArthur quoted in his speech. Millions of his fellow Americans fought back tears as he said that he had tried to fulfill his duty before God.

God’s soldiers will never die. They won’t even fade away!

“O death, where is thy sting? O grave, where is thy victory? The sting of death is sin; and the strength of sin is the law. But thanks be to God, which giveth us the victory through our Lord Jesus Christ” (verses 55-57).

The strategy for defeating sin is not attempting to do away with God’s perfect law. The right strategy is to admit our weakness and evil, embrace that law, repent of our sins and go forward with God’s help to keep the law. That is the very definition of victory over sin.

“Therefore, my beloved brethren, be ye stedfast, unmoveable, always abounding in the work of the Lord, forasmuch as ye know that your labour is not in vain in the Lord” (verse 58).

Be you steadfast, unmovable. What an encouraging conclusion! It is possible for true Christian soldiers to be rock solid! It is possible for us to always abound in the work of the Lord. That is clearly evident at God’s West Point. Herbert W. Armstrong College students who trust in God and war against sin abound in their experiences at Armstrong College: classes, work, service, social events, dating, friendship. And the key to it is abounding in the work of God, being profitable servants. A man who serves God will not rest on his past laurels.

Abounding in God’s work is the very reason the college exists!

To the courageous class of 2020, and to all true Christians now on deployment: Onward to victory.