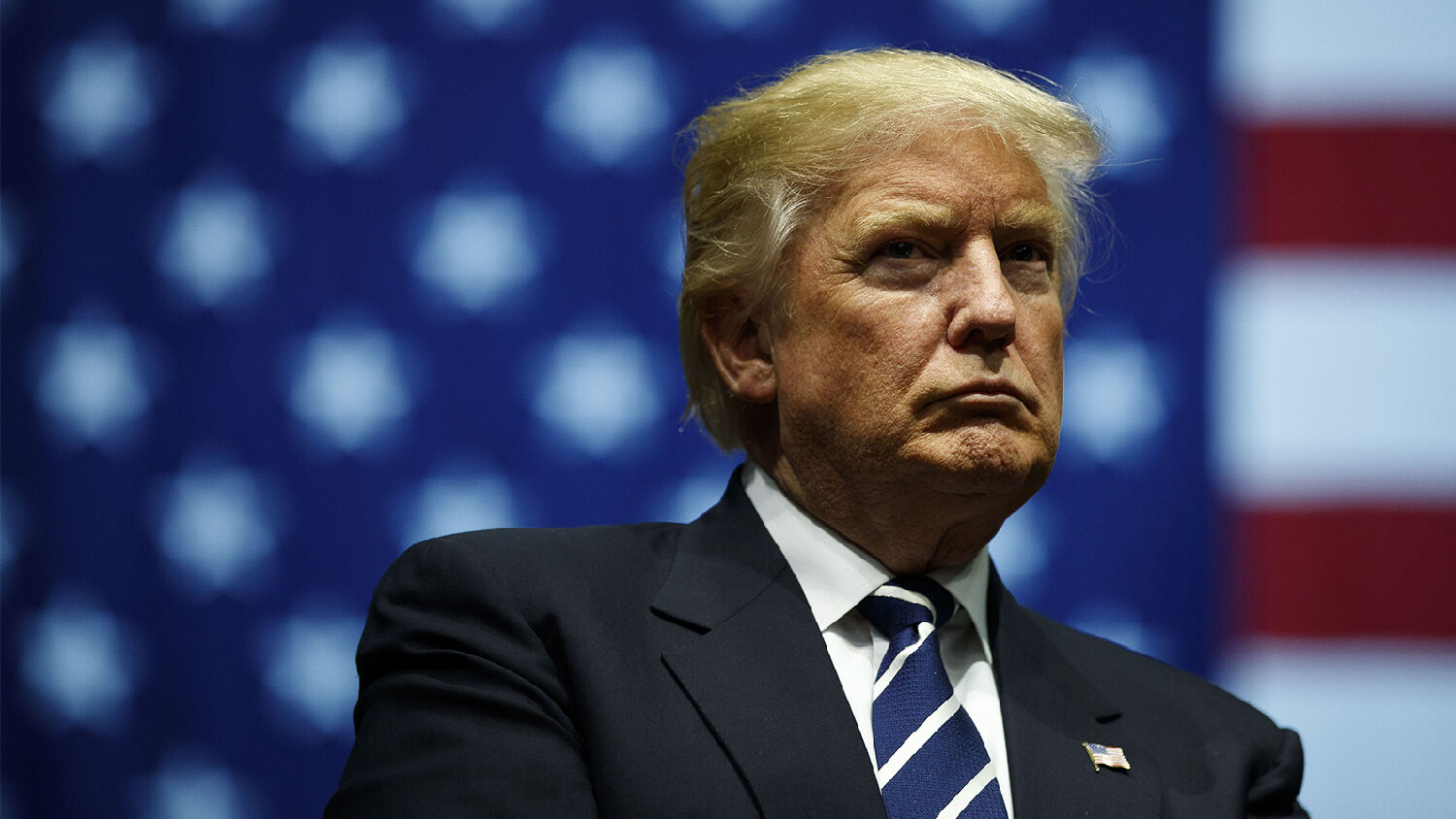 President-elect Donald Trump looks on during a rally at the DeltaPlex Arena, December 9, 2016 in Grand Rapids, Michigan.
Drew Angerer/Getty Images

At the end of May 1940, with British troops in full-scale retreat to Dunkirk, and France about to fall, Winston Churchill, British prime minister for only two weeks at this point, faced the biggest decision of the war and of his life: Should he negotiate a peace settlement with “that man”?

This decision was made considerably more difficult by the fact that colleagues, led by esteemed Foreign Secretary Viscount Halifax, believed Britain must sue for peace. The pressure on Churchill was immense. Halifax and his supporters were men of prodigious knowledge, experience and eloquence. Their arguments were persuasive. These men were “experts.”

Thankfully for us all, Churchill rejected the advice of these experts. In a speech to members of the outer cabinet on May 28, he laid out his view on surrender, concluding the message with these now-immortal words: “If this long island story of ours is to end at last, let it end only when each one of us lies choking in his own blood upon the ground.”

Rejecting the counsel of Halifax and his panel of experts was one of the greatest acts of leadership Winston Churchill ever displayed.

Ultimately, leadership isn’t about IQ or eloquence. It isn’t about being great at managing a committee or leading like-minded people. It’s not being the loudest or toughest guy (or girl) in the room, or the most creative, talented or sophisticated.

Leadership is being able to see what others do not see, then helping others see what you see. It’s about having a clearly defined set of values and principles and defending them at any cost. Leadership takes all the facts, evidence and expert opinions, rationally distills and processes them, and makes informed, balanced, lawful and sound decisions that benefit the majority. Leadership is about recognizing untruths, threats and disreputable figures and policies. More than that, great leaders expose and confront lies, deceit and corruption, even when it means “choking in [your] own blood upon the ground.”

Leadership is about consistent, sacrificial service to a right and noble cause. Winston Churchill, one of history’s greatest leaders, embodied these characteristics.

And so does United States President Donald Trump.

In a world where admiring Donald Trump is widely considered a cardinal sin, such a statement sounds ridiculous. Some will accuse me of president-worship. But those who read to the end will see that this article is ultimately not about Donald Trump.

Think about it. Throughout the coronavirus crisis, while most leaders timidly deferred to the experts (activist scientists brandishing flawed models) and social influencers (the media), America’s president bravely critiqued and questioned. Mr. Trump hasn’t handled the crisis perfectly, but his initial instincts proved correct. He hasn’t been afraid to say “No” to the experts. Thanks almost solely to its president, America was one of the slowest to enter lockdown and is one of the fastest to come out.

Leadership means standing for principle and truth, even against massive opposition and no matter the consequences. Think about Mr. Trump’s willingness to defend traditional America, the Constitution and the rule of law, and American values against violent attacks by the radical left. He understands the radical left better than most people, even most conservatives. He sees truth and realities others simply do not. And where many tolerate lies and injustices, and shy away from confrontation, America’s president rolls up his sleeves and clenches his fists. He’s the only top leader in America willing to attack and expose the radical left!

Most leaders today use language that is vague and noncommittal; they hedge, ramble and obfuscate. Donald Trump nails his colors to the mast. He speaks the truth as he sees it, sometimes ineloquently and tactlessly, but always with candor and force, and with clarity of purpose. In Britain, trying to figure out where Prime Minister Boris Johnson stands on the lockdown is now a national pastime. My friends in America always know where their leader stands.

Leadership means inspiring followers through crisis by making them understand you believe in them. Where others treat citizens like children, banishing them to their rooms “for their own protection,” Donald Trump sees the American people as brave warriors. He says it often: “We have to be warriors. We can’t keep our country closed down for years. [W]e have to do something.” Who doesn’t love being called a warrior?

Like Churchill, Mr. Trump projects confidence and hope. Rather than focus on the past, he concentrates on the brighter days ahead. He wrote in a tweet from March 16, as the nation was freaking out, “Everybody is so well unified and working so hard. It is a beautiful thing to see. They love our great Country. We will end up being stronger than ever before!”

One of the telltale signs that Churchill was a brave and brilliant leader was the way he was treated by the mainstream media and the political establishment. It was the same with Abraham Lincoln, Ulysses S. Grant and others. These men were often reviled by the sophisticated elite. Judging strictly by this standard, Donald Trump might be one of the greatest leaders this world has ever seen.

Churchill had plenty of detractors, but he wasn’t as widely, viciously and personally reviled as Donald Trump. The president is relentlessly bombarded with lies and slandered as corrupt. From the summer of 2016, he has faced down one accusation after another (colluding with Russia to rig an election, being racist and sexist, sexual assault, obstruction of Congress and abuse of power). The president’s diction is occasionally imperfect, but his words are always misconstrued and manipulated. Every program and policy, every person connected to him, is attacked. Every press conference is a feeding frenzy. He could be the most hated world leader on Earth.

But none of this bogs Donald Trump down. He doesn’t cower in fear; he hasn’t quit. He remains remarkably effective and productive, even as his enemies attack with astonishing passion and hatred.

President Trump is a truly extraordinary leader—perhaps the greatest world leader since Churchill himself.

But we must keep this in perspective. What is it that really makes this man impressive?

Donald Trump’s greatest strength is also his greatest weakness. This man’s epic self-confidence, his total trust in himself, his belief that he is invincible, is going to cause him massive problems.

In Romans 13:1, the Apostle Paul writes that “the powers that be are ordained of God.” God sanctions, and sometimes directly endorses, world leaders. In the case of Donald Trump, Bible prophecy shows that God is very intimately involved in his presidency and leadership.

We have repeatedly explained the prophecies in Amos 7 and 2 Kings 14 in recent years (if you are unfamiliar with them, please read Great Again, by Trumpet editor in chief Gerald Flurry). These prophecies reveal that America’s president fills the role of an end-time Jeroboam ii. Anciently, King Jeroboam ii of Israel was an extraordinarily successful king. Much like Donald Trump has done with America, this ancient king presided over a stunning political, military and material renaissance in Israel.

But notice the ultimate source of Jeroboam’s success: “For the Lord saw the affliction of Israel, that it was very bitter: for there was not any shut up, nor any left, nor any helper for Israel. And the Lord said not that he would blot out the name of Israel from under heaven: but he [the Lord] saved them by the hand of Jeroboam the son of Joash” (2 Kings 14:26-27). God was clearly the supreme architect behind the accomplishments of King Jeroboam ii.

It is the same today: God is the protagonist in the dramatic, ongoing tale of Donald Trump!

Like Jeroboam anciently, Mr. Trump is a carnal, deeply sinful man. Some of the accusations made against him are fair and accurate. But we must not allow Donald Trump’s imperfections—often exaggerated by the media’s terrible hatred—prevent us from seeing that God is using him in a powerful way!

“It is critical that we realize why this resurgence!” Mr. Flurry continued. “God Himself is pushing back against the Satan-inspired forces that would have destroyed this nation! He is exposing those forces so we can see them clearly. And He is using a man to save the superpower of prophetic Israel, the United States—temporarily.”

This is why Trumpet executive editor Stephen Flurry talks so much about Donald Trump, Barack Obama and the ongoing conflict on his Trumpet Daily Radio Show. All of this was prophesied to happen right before the return of Jesus Christ! These events announce this epic soon-coming event!

If you take anything from this article, it must be this: God is ultimately responsible for the leadership and accomplishments of America’s president! God is using this man to save Israel one last time. After this has happened, Israel and the world will enter the time period known as the “great tribulation” (Matthew 24:21).

Donald Trump does not understand this, and he’s too vain to admit it if he did. Don’t make the same mistake. America’s president is living, daily proof of God and the phenomenal accuracy of Bible prophecy.