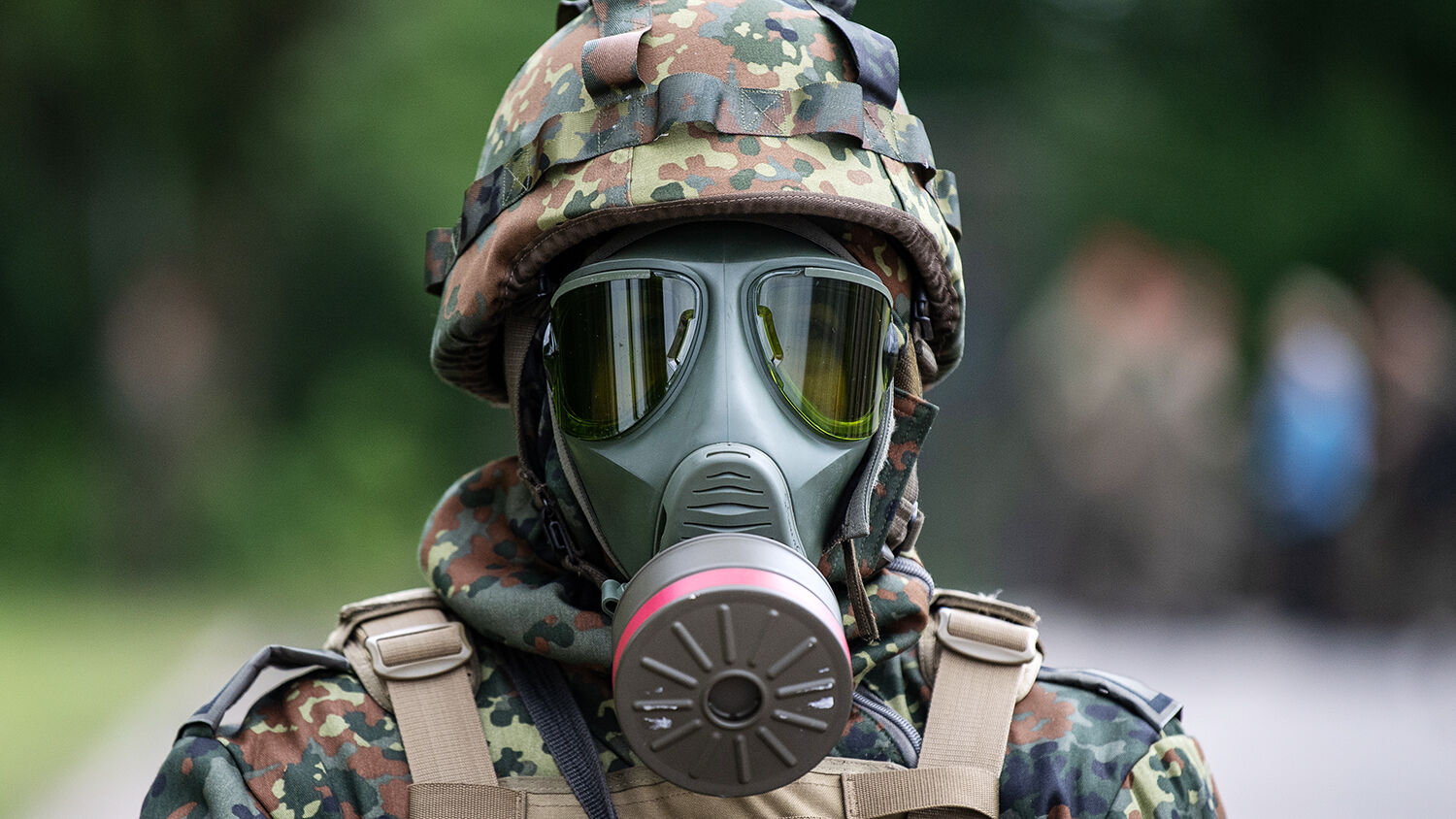 A soldier of the nbc Defense Battalion 750 attends a demonstration on the premises of the Bundeswehr on May 22, 2019.
Fabian Sommer/Picture Alliance via Getty Images

The chaos caused by the coronavirus pandemic shows how destructive a biological weapon could be.

Coronavirus has brought the world to a screeching halt. It has done more damage to our economies and has caused more fear than September 11 or any terrorist attack to date. Likely, rogue regimes and terrorist organizations alike are sitting up and taking note during this crisis.

Some warn that we should be prepared for the possibility of human-engineered bioweapons being used on a mass scale. If a virus can cause this much trouble when it kills less than 1 percent of those infected, what would happen with a real plague? What if there was a virus as infectious as coronavirus but with the lethality of Ebola or smallpox?

There may already be such a virus, or many such viruses, frozen and stored in government labs around the world, created as bioweapons or for defense against them.

No major Western power has used a bioweapon since World War i. Today, most states have signed the treaty outlawing them; although several nations have kept not-so-secret weapons programs regardless. China is recognized as the world expert in bioweapons research, but other nations known to be carrying out experiments include Russia, North Korea and Iran.

North Korea alone is capable of producing a ton of bioweapons a year, according to a report published by the Belfer Center at Harvard. It has weaponized at least 13 germs including, anthrax, yellow fever, typhoid, botulism, smallpox and the bubonic plague.

“Pound for pound” many bioweapons are more lethal than nuclear weapons, reported American Spectator. As little as a gallon of weaponized anthrax could kill every human being on the planet. They can be manufactured on a small scale for a fraction of the cost of a single hydrogen bomb, and once deployed, there is no way to contain the damage.

In the wake of the coronavirus outbreak, rumors were flying that it may have escaped from a lab at the Wuhan Institute of Virology. Regardless of whether this is true, the possibility has exposed a massive vulnerability in national security.

Greg Sheridan, foreign editor of the Australian newspaper, wrote: “The covid-19 crisis demonstrates to everyone—to strategic competitors, ambitious states and indeed terrorists too—the astonishing scale of damage achievable.” Coronavirus should be a wake-up call to a world that is not prepared to handle a bio-emergency.

In the past, there have been two limiting factors on any nation considering biological weapons: First, if caught, it would suffer devastating retaliation; second, the danger of infecting its own people.

This second point may no longer be a factor.

Modern biotechnology has advanced significantly in recent years, making “specific ethnic genetic attacks” possible. Using gene-editing crispr technology, viruses can now be weaponized to target specific races or groups of people. Some experts think that in the future, terrorists are more likely to choose bioterrorism than even nuclear weapons. With a designer weapon, a terrorist state could devastate its enemy with minimal expense to its own population. The coronavirus pandemic indiscriminately attacks everyone, but the next catastrophe could be a calculated instrument of genocide.

With a genetically targeted weapon, only the threat of retaliation remains a deterrent. It is foolish to assume that a nation would never use a bioweapon based solely on self-preservation, particularly if it has already demonstrated its willingness to die for its cause. For example, the Islamic Republic of Iran believes that worldwide destruction will bring about the coming of its version of the Messiah, regardless of whether it is victorious in war.

During the Cold War, the Soviet Union coined the phrase Mertvaya Ruka, or “Dead Hand.” The doomsday mechanism by that name was designed to launch nuclear missiles in the event of an American strike. The attack was to be immediate and automatic; without a direct order to stop the launch, there was no way to prevent it. This kind of strategy guarantees mutually assured destruction. For a smaller and weaker nation or terrorist organization, the “Dead Hand” strategy will most likely be biological.

Bioweapons are no longer just a thing of science fiction.

Eric Mandel, director of the Middle East Political Information Network, wrote: “Our Achilles’ heel will be the amnesia of time, as people will become naturally complacent when future warnings will not materialize, lowering our guard in the years to follow.”

When the dust settles from the current crisis, the world will be as susceptible as ever to global pandemics and perhaps more so to the growing threat of biowarfare. This shaky world is becoming more unsteady day by day, but there is no need to be worried or afraid of the future. Read our article “Coronavirus: How Should You Respond?”—it will give you the hope, encouragement and certainty you need in these difficult times.