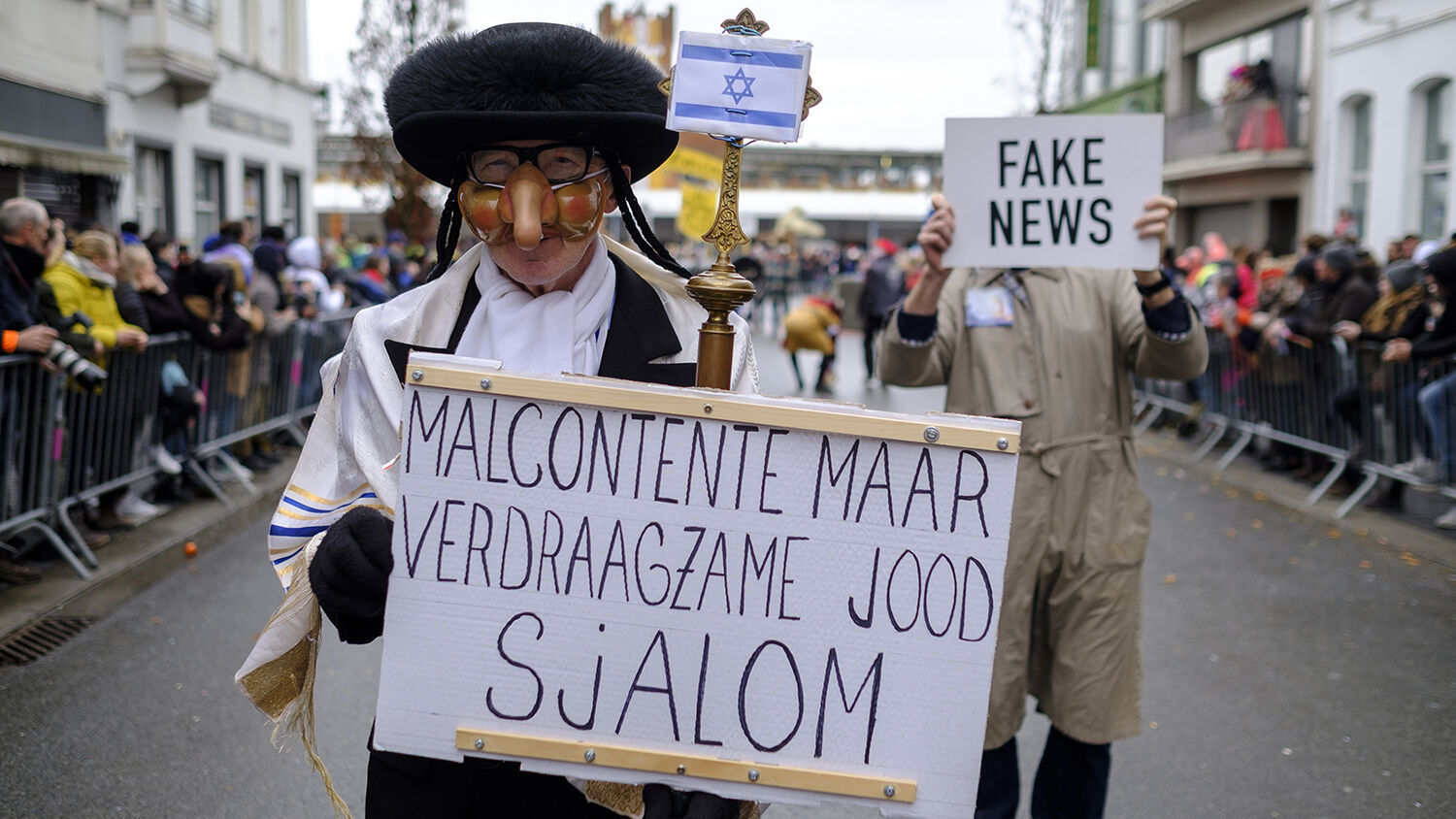 A man dressed as a rabbi carries a sign during the 92nd Aalst Carnival parade on February 23 in the streets of Aalst, Belgium.
Thierry Monasse/Getty Images

Blatant displays of Nazism and Holocaust-mocking are paraded on the streets of Europe today.

This week saw two public displays of anti-Semitism within Europe. These events only add to a growing pattern of anti-Semitism and disregard for recent history that is becoming more evident and more overt with each passing day.

One of these displays occurred in Aalst, Belgium, during its annual three-day carnival. The carnival, which began on Sunday, is said to have originated over 600 years ago. The carnival’s official website explains, “Political satire is also a big part of Aalst Carnival and it is well known for its satire and the way that it makes fun of local and international events. Everything is put on display and absolutely nothing is off limits, not religion, race, politicians or even celebrities.” And apparently, not even anti-Semitism.

This year’s parade featured Nazi uniforms, participants with long fake hooked noses, and a group dressed as Jews with a sign saying, “Don’t tell the truth about the Jew.” Other signs mocked circumcision and costumes of Orthodox Jews as ants, reminiscent of Adolf Hitler calling the Jews “vermin.”

As expected, the display led to an outcry by many, including the Belgian prime minister. But the response by city officials is almost as shocking as the event itself.

Peter Van den Bossche, spokesman for Aalst’s mayor, justified the event, saying that the carnival is just “a weekend of freedom of speech” with no “movement behind it.” He went on to say, “This doesn’t encourage anti-Semitism …. Two hundred percent it’s not anti-Semitic.” Bossche told the bbc that “it’s our humor … just fun.” That is a chilling remark. The 25,000 Jewish Belgians carted off to Auschwitz death camp during World War ii certainly would not call this display “just fun.”

A similar display of anti-Semitism occurred at the Aalast Carnival last year. This celebration is only 19 miles from Brussels, the beating heart of the European Union.

The Israeli Embassy in Madrid condemned “the vile and repugnant” display for “making fun of the murder of millions of Jews by the Nazis.” The group responsible apologized and canceled its participation in coming parades, but said in a puzzling statement that it had intended to spread “a message of consideration and respect” toward the Jewish victims.

Germany also received a warning from its Israeli ambassador this week. Jeremy Issacharoff warned that recent attacks on Jews and Muslims were endangering German democracy. “No democratic society can survive if minorities are constantly threatened or harmed,” he warned, pointing to the Holocaust as an example of where such hatred leads. Yet the openly anti-Semitic Alternative für Deutschland is the third-largest party in Germany. That fact alone legitimizes questioning how long Germany’s democracy will last.

What many saw in Belgium and Spain last week, along with neo-Nazi rallies held in Germany every year, is a reflection of the growing levels of anti-Semitism becoming evident in all corners of Europe.

Holocaust revisionism is one example of this anti-Semitism. A poll of 16,000 individuals from 16 European countries found that approximately one fifth of respondents believe that “Jews exploit Holocaust victimhood for their own needs.” More than one third believe that their nation suffered as much as the Jews during World War ii and one fifth believe that a secret network of Jews influence global politics and economics. Twenty-five percent of respondents also believed that Israel’s policies today make hatred toward Jews understandable.

The rise of fringe parties, together with surging anti-Semitism, is the same trend Europe experienced during the 1930s, when the Nazi Party rose to power and anti-Semitism became popular around world, including in Britain and America.

The 1930s history remains a powerful warning for the future. Bible prophecy gives us an even clearer warning. And that prophecy tells us there will be some major similarities—as well as some key differences.

In his book The Key of David, Trumpet editor in chief Gerald Flurry explains why history has been filled with so much hatred for Jews—and explains that this hatred will only continue as we draw closer to the rise of the resurrected Holy Roman Empire. Mr. Flurry writes:

Because of the plan of God, the word Jew can really stir up Satan’s wrath. The Jews are a type of what all men are to become spiritually. It is God’s association with the Jews that has turned Satan even more violently against them! Hatred for the Jews has been inspired by Satan. …

Satan can stir up vicious hatred. He loves to use out-of-control emotions. A religion taken to the extreme—such as radical Islam—gives him a great field to work in. Nazi Germany exhibited fanatical hatred for the Jews. The Nazis also used emotion to stir up a repugnant hatred. The coming beast power will exhibit the same hatred for the Jews as well.

Such open displays of Nazism and anti-Semitism on the streets of Europe today reveal how chillingly close to the revival of this beast power we are.

To learn more about the resurgence of anti-Semitism, read our article “The One Minority Society Loves to Hate.”