The UK leaving the European Union was foretold in the Bible! What does this source of advance news say will follow? 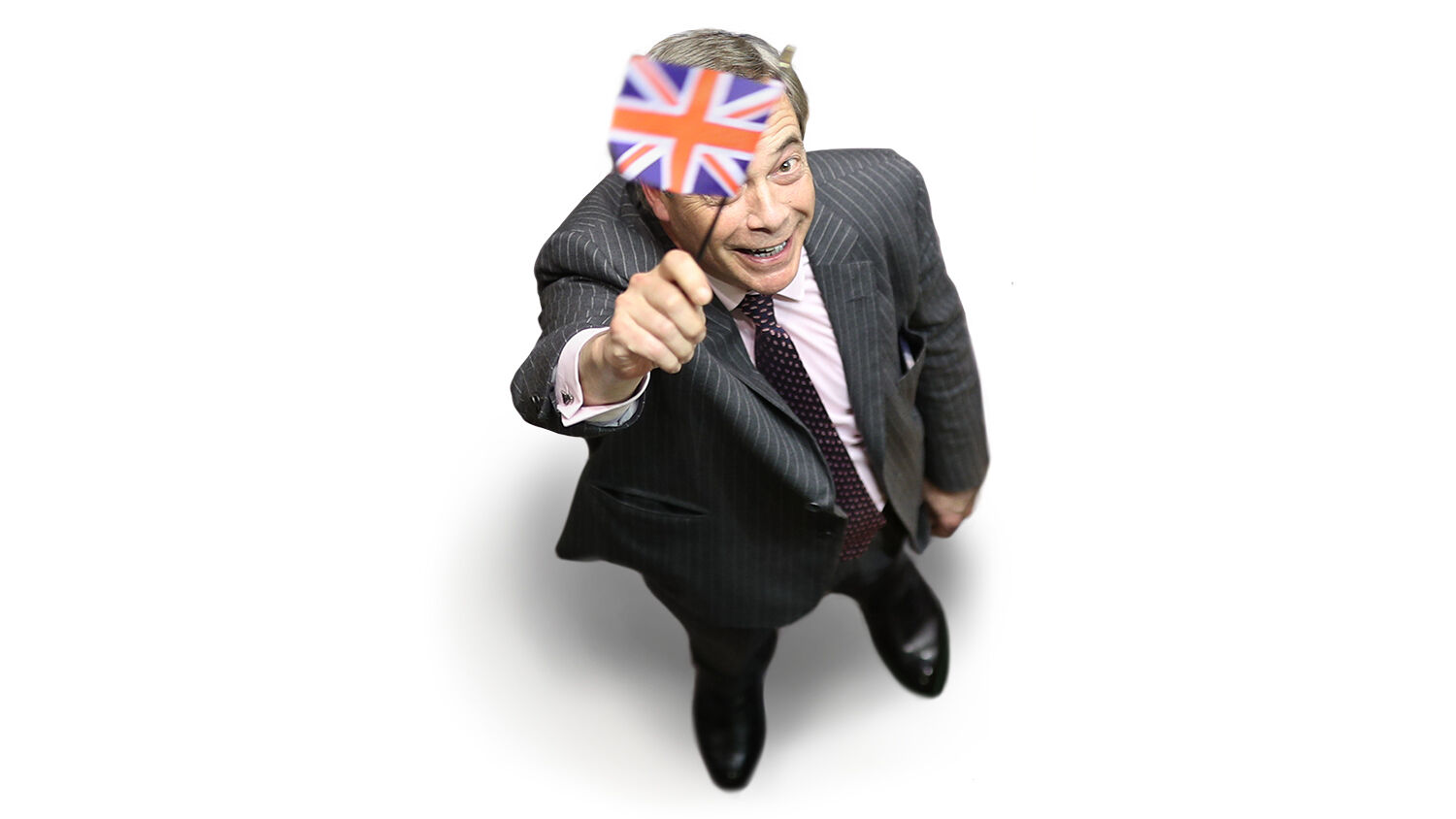 The UK leaving the European Union was foretold in the Bible! What does this source of advance news say will follow?

At 11 p.m. on January 31, the United Kingdom officially left the European Union. For those in the UK, it was a cause for celebration or commiseration, depending on your view.

But this date is also of huge importance for everyone everywhere. This one event teaches the most important lesson anyone can learn.

Britain’s decision to leave the European Union was one of the biggest news stories of the decade. It caught even its most passionate supporters by surprise. Brexit advocate Nigel Farage finished the day of the referendum—June 23, 2016—believing his cause had lost.

Even after the referendum passed, Farage and fellow euroskeptics had more battles to fight. Opposition to implementation put up barrier after barrier, and the cause still looked hopeless. But on January 31 this year, Britain finally left the European Union.

This event that surprised so many did not surprise Trumpet readers.

Herbert W. Armstrong spent decades warning about world events based on Bible prophecy. He consistently said Britain would not be in a soon-coming European superstate.

In 1945, broadcasting as World War ii ended, Mr. Armstrong predicted that Germany would rise again within “a European union.” As this union took shape, and some talked of Britain joining, he wrote in 1956, “Germany is the economic and military heart of Europe. Probably Germany will lead and dominate the coming United States of Europe. But Britain will be no part of it!”

When Britain joined in 1973, he forecast that they would regret it, writing, “Britain is going to look back on Monday, Jan. 1, 1973, in all probability, as a most tragically historic date—a date fraught with ominous potentialities! For that date marked the United Kingdom’s entry into the European Community.”

Over a decade after Britain joined the Common Market, Mr. Armstrong continued to forecast that it would not be part of this European superpower. “[T]he soon-coming resurrected ‘Holy Roman Empire’—a sort of soon-coming ‘United States of Europe’—a union of 10 nations [will] rise up out of or following the Common Market of today (Revelation 17),” he wrote in 1985 in Mystery of the Ages, published less than a year before he died. “Britain will not be in that empire soon to come.”

The Trumpet has consistently proclaimed the same message. “We have … said for many years Britain would not be a part of the final European Union,” wrote Trumpet editor in chief Gerald Flurry in 2012.

But where is Britain going now? What will its relationship with Europe be? Britain is out, but so much of its future remains to be decided.

Amid all this uncertainty, it makes sense to turn to the same source that forecast Britain’s exit: the Bible.

The Bible shows that the British people are descendants of the Israelite tribe of Ephraim. There is abundant proof that the British are modern-day Israelites—a book’s worth of proof, in fact. We would like to offer you a copy of that book—The United States and Britain in Prophecy, by Herbert W. Armstrong—free of charge, with no cost, obligation or follow-up.

Ancient Israel divided into two nations after the death of King Solomon. Judah was the southern nation with its capital at Jerusalem, and its people are known today as Jews. That is a truth generally acknowledged. But the northern 10 tribes were called the house of Israel. It became a completely separate nation from the Jews. In fact, the word Jews first appears in the Bible within a report about Judah fighting Israel (2 Kings 16:5-6).

From 721 to 718 b.c., the kingdom of Israel was invaded, conquered and removed from its land by the Assyrian Empire (2 Kings 17:18). Its people were deported to the southern shores of the Caspian Sea (verse 6; 1 Chronicles 5:26). Meanwhile, the kingdom of Judah remained in its land for more than a century until it was later conquered and taken captive.

The Assyrians were later conquered by the Chaldean-Babylonian Empire, and then migrated north and west to Europe. Ultimately, they became modern Germany. The “lost 10 tribes” migrated northwest as well, but they migrated even farther. Some tribes settled in France, Belgium, Holland and the Scandinavian countries, where their descendants are today.

But two tribes in particular migrated even farther: Ephraim and Manasseh. The Bible prophesied that these two tribes would inherit massive national wealth (Genesis 48:14-16).

Ephraim migrated to the British Isles. Manasseh settled in the United States.

Genesis 48 prophesies that Ephraim would become a great company of nations and that Manasseh would become a great nation (verses 18-20). Genesis also specifies that these descendants of Abraham would control the world’s most strategic mountain passes, ports, canals, capes and other strategic choke points (Genesis 22:17-18).

Only two nations in history can fit God’s promises to these two tribes: the British Empire and the United States. These two peoples share a common ancestry. In the 19th and 20th centuries, both came into possession of the majority of the world’s wealth and all of its most important trade routes and sea gates. No other two nations have received these promises so abundantly.

This is just the briefest overview. The proof of this truth is abundant, and it is truly important to look into deeply, to study, and to prove for yourself. Because its implications are staggering. It opens up the meaning of a tremendous amount of biblical prophecy, showing why God was so careful to ensure those prophecies were recorded and preserved through the millennia, and showing how deeply relevant they are to our day.

The fight for Brexit was hugely divisive. In an effort to stop it, the pro-EU reached a new low in politics, branding the Brexiters as racist bigots.

But with Brexit done, there is hope now that Britain can move into a glorious future. The shackles of EU membership have been removed. The bitter divisions are over.

Is this a new birth of freedom for Britain? At the Trumpet, we have certainly pointed to the flaws in Britain’s relationship with Europe. We have lamented the loss of sovereignty to Europe. So is it sunlit uplands from now on?

There certainly may be a short-term resurgence after leaving the EU behind. But when you understand Bible prophecy, you see that the future of Britain after Brexit is both far darker than any analysts believe—yet, in the long run, far more spectacular.

If you understand that the British people are called Ephraim in Bible prophecy, you will discover that the same Bible that prophesied modern Ephraim’s wealth and power also prophesies of its cataclysmic upheaval!

God prophesied that after Ephraim and Manasseh received their promised wealth and power, if they did not turn to the God who blessed them, He would remove those blessings and punish these nations with war and captivity.

Daniel 12:1 prophesies of “a time of trouble, such as never was since there was a nation even to that same time.” Jesus Christ called it a period of “great tribulation,” that would annihilate mankind if He didn’t intervene! (Matthew 24:21-22).

God specifies that the U.S. and Britain will receive the worst of this punishment when He says: “Alas! for that day is great, so that none is like it: it is even the time of Jacob’s trouble; but he shall be saved out of it” (Jeremiah 30:7). The name Jacob refers to Joseph’s two sons, Ephraim and Manasseh, who were given Jacob’s name. The next verse shows that the descendants of Ephraim and Manasseh will go into captivity!

And what people does the Bible prophesy will take them into captivity?

Britain and America are not the only powers identified in your Bible. Several scriptures talk about a European power. Revelation 17, for example, talks of a beast—a symbol in Bible prophecy for an empire. This empire is controlled by a woman—which symbolizes a church. The beast has “seven heads,” which represent seven kings (Revelation 17:10). The chapter goes on to show that this beast rises and falls seven times.

Where can you find an empire, led by a church, that rises and falls throughout history? This can only be referring to the Holy Roman Empire: the repeated attempts to resurrect the Roman Empire that were guided and controlled by the Roman Catholic Church.

Other passages show that Assyria—modern Germany—plays a major role in this power.

In Isaiah 10:5, God says, “O Assyrian, the rod of mine anger, and the staff in their hand is mine indignation.” And against whom does God use this rod? Verse 6 shows that it is against “the people of my wrath”—the nations of Israel, including Britain, that have angered God with their sins.

“Germany is the economic and military heart of Europe. Probably Germany will lead and dominate the coming United States of Europe. But Britain will be no part of it!”
Herbert W. Armstrong, 1956

When Mr. Armstrong was on the scene, this empire had risen and fallen six times. We are seeing it rise before us one last time—in the form of the European Union. Mr. Armstrong knew that the Bible said one more empire would rise. That is why he forecast, in 1945, that a “European union” would soon arise.

This is why we he knew that Britain would not be part of that union in the long run. It will be a victim of this new European power, not a participant.

If Mr. Armstrong’s Bible-based forecasts were right about Brexit, that means you can trust them to be accurate in describing what comes next: the rise of a superstate that terrorizes the world. It may seem far-fetched. But then so did the idea of a “European union” in 1945, or Brexit in 1973.

The Most Important Lesson You Can Learn

This European superstate will have a massive impact on everyone around the world. It is critical that we know it is coming. But that is not the most important reason why you need to understand this forecast.

Mr. Armstrong’s forecasts about Brexit prove that the Bible is a now book—a book that speaks to us today, a source we can rely on totally. One third of the Bible, the inspired Word of God, is prophecy.

Daniel 4:17 says, “[T]he most High ruleth in the kingdom of men.” Fulfilled prophecy confirms this. God forecast events like Brexit. When they are fulfilled, they demonstrate His power. Trumpet editor in chief Gerald Flurry wrote that this lesson—that God rules in the kingdom of men—is “the greatest lesson mankind could possibly learn.”

God forecast the major events of our world thousands of years ago. He reveals this truth to the man He is using. This is what we must take away from these successful Brexit forecasts.

But to really grasp this lesson, you cannot just take our word for it that the Bible prophesies Britain’s break from the EU. You must prove it for yourself. If you have never read them, request our free books The United States and Britain in Prophecy and Who or What Is the Prophetic Beast?

“This book will open, to open minds, this hitherto closed vital third of all the Bible,” he wrote. “No story of fiction ever was so strange, so fascinating, so absorbing, so packed with interest and suspense, as this gripping story of our identity—and our ancestry.”

This “active existence of the living God” was on vivid display throughout the Brexit process. That is why it is critical you understand it.

The United States and Britain in Prophecy
People of the Western world would be stunned—dumbfounded—if they knew! The governments of the United States, Britain, Canada, Australasia, South Africa would set in motion gigantic crash programs—if they knew! They could know! But they don’t! Why?
From The April 2020 Philadelphia Trumpet
View Issue FREE Subscription
Next
Previous